Supposedly once a tradition in our neighbourhood, the annual Christmas Luminaria hasn't been held in a full decade. This year they revived the tradition and I'm so glad they did!

Christmas is a little bit different here—more different than I expected it to be. For one thing, seeing a house decked out in Christmas lights is quite rare. Instead people do relatively modest displays—a single candle in each window (my favourite alleged meaning of this tradition is that the candle in the window signifies that there is room in the inn tonight) or a string of lights—usually white—around the doorway. I haven't seen many extravagantly lit houses around (though we have heard rumours—from more than one source (when I told Andrew that two friends told me about it on the same night (last Monday, actually) he said, "Two sources? We have triangulation—we should definitely go!") of a pretty good house a few miles away which we'll have to check out).

We put up our lights today; plain white all along the front of our house. I climbed the ladder and clipped the lights to the gutters. Andrew bounced the baby and helped move and balance the ladder. The girls went over to the neighbour's backyard (and had a blast) which was so helpful! Our house looks simple (and beautiful), just like everyone else's in our neighbourhood...except this house:

Luminarias or (perhaps more accurately) farolitos are also pretty common in these parts (I'm assuming, because my friend Courtenay's neighbourhood did one, too (it's also her first Christmas in North Carolina)). I've seen these elsewhere—on Temple Square, for example—but never just as a neighbourhood party.

Our HOA and some other volunteers filled over 2000 white paper lunchbags with wet sand and a cup holding a candle and distributed them every few feet along every street in our neighbourhood. We were instructed to light them as it got dark and were invited to go out walking with our neighbours. 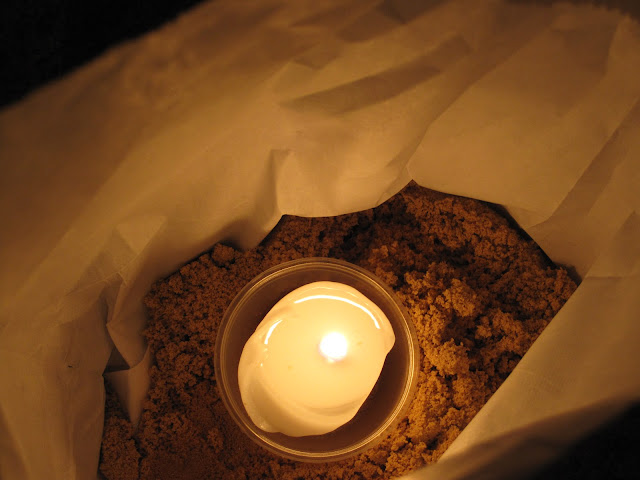 There were a couple of hot chocolate and cookie stations set up and Santa was driving around in his one-truck open sleigh to meet all the neighbourhood children and distribute candy canes.

When we were gathered around a hot chocolate station waiting for Santa to arrive (eating cookies because they'd run out of hot chocolate (not that it mattered; it's not that cold)) a little girl asked the volunteer if she knew Santa.

"Wow!" the little girl said with wide eyes. Then she gulped, "Will I have to sit on his lap?"

"No, Santa's staying on his sled tonight." 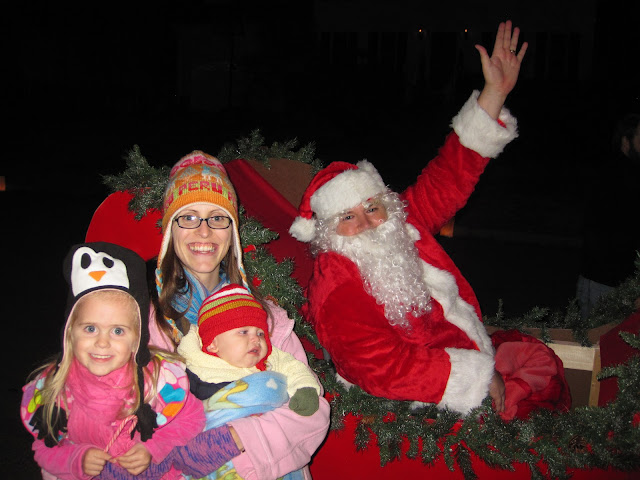 And he did, which was totally fine with me because I usually have to drag my girls over to him, anyway. He wasn't a great Santa but for just a man volunteering from the neighbourhood (I mean, uh...he totally flew in this morning from the North Pole) he did a fantastic job being jolly the whole night long.

We bravely (and with some gentle reminding gratefully) took our candy canes from him, snapped a couple of pictures, and wished him a Merry Christmas. 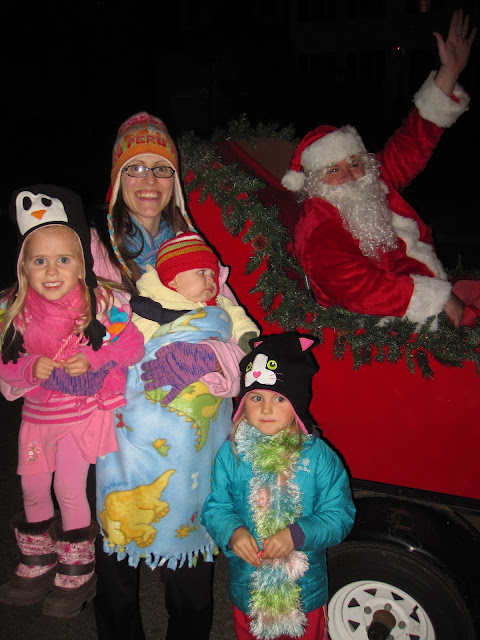 Then the chauffeur pulling Santa's sleigh threw the truck into drive and started off to find the next group of children. They didn't get very far though because a woman on the other side of the sleigh started screaming, "Oh, blankity-blank!" (Only she didn't say blankity-blank.)

Santa's sleigh had run right over her foot! (They should write a song about that...oh, wait...they have). Fortunately(?) it was only the wheel of the trailer holding the sleigh that ran over her foot and not the truck. She was in pain but was able to limp away, declaring she was sure it wasn't broken. Maybe. 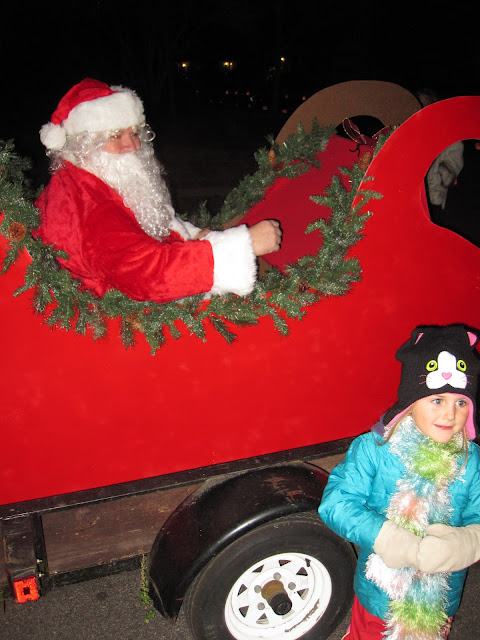 It was a fun family walk and the lights were mesmerizing.

My friend Courtenay said they looked like the floating lanterns in Rapunzel (which is ironic because Rachel just drew the royal crest from Tangled on our driveway this afternoon). They really were that beautiful. 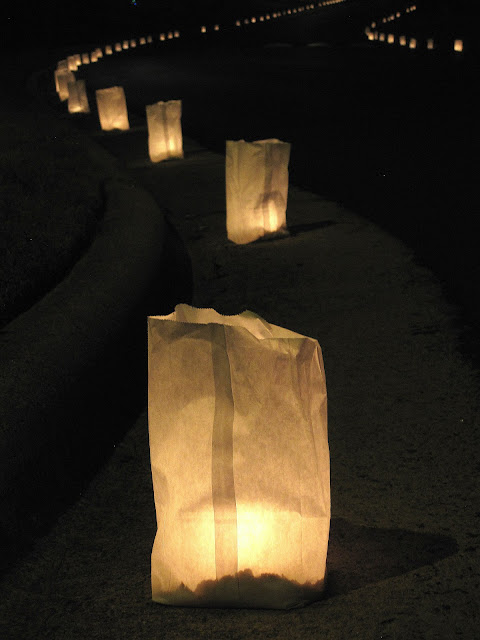 There are a number of stories surrounding this tradition as well, one of which is that they "guide the spirit of the Christ child to one's home," another is that they represent the light that guided the Wise Men to Christ (also got that from Courtenay). I'm not sure which version I like more, but I'm leaning toward the second. 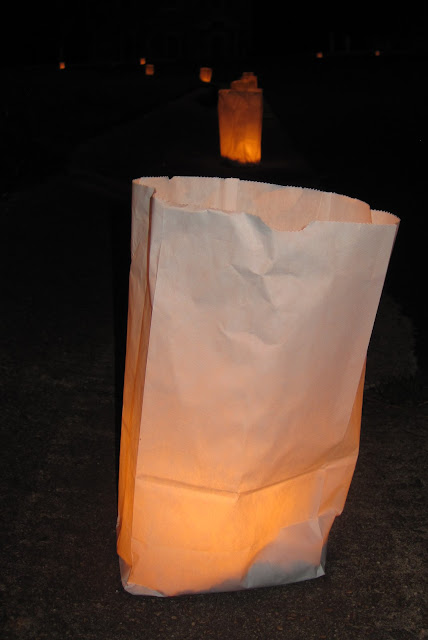 When we got home the girls were dawdling over the threshold (they must've known bedtime was coming) so I had to urge them inside, saying, "Quick, quick! Before any mosquitos get inside!"

Quite an unusual thing to say in December, don't you think?

We wear hats and gloves and things out of principle more than necessity here—they even send notes home from school reminding parents to dress their children appropriately for the weather. It's admittedly chilly in the mornings but by mid-afternoon it's usually quite pleasant. This evening was quite mild and there were mosquitos buzzing around the Christmas lights. The forest is still alive with the sounds of active animals—Andrew said he almost ran over a frog the other day! In December!

It's not quite feeling like Christmas is only ten days away because we're missing so many environmental cues. It's a different feeling than those we had in Egypt, where we expected to be missing environmental cues. Here we've had a lovely fall—the trees are naked and it looks like it should be cold outside but it's not. I almost wonder how the trees managed to lose their leaves at all! We must have wimpy trees here—trees that think 60 degrees is cause for shedding their leaves.

Our little evening stroll helped get us in the mood, as did the small act of putting up our Christmas lights, though we did have this conversation:

The sun is still shining, the bugs are still biting, and our flowerbeds are being taken over with weeds, so I suppose...it's beginning to look a lot like Christmas?
Posted by Nancy at 10:50 PM