Yesterday Brother Brown (who had been "hiding" our swing set in his field) phoned to say he had the swing set loaded in a trailer and was ready to come to our house. This was a surprise for us because we'd been planning on helping to load the trailer ourselves. Brother Brown had enlisted the help of a couple of neighbours however, and instead of helping load a swing set I found myself hurrying to get out the door before they arrived.

Our neighbourhood has two entrances and I briefly considered turning left to go out the "other" entrance but I'm a creature of habit when it comes to driving so I turned right and went to our "usual" one. Just as I was pulling up to the stop sign, who do you think comes driving by in a big, shiny truck pulling a trailer burdened with a play set? Brother Brown, of course.

And thus I was faced with lying straight to my child's face in order to preserve a surprise. But I didn't lie. Not once.

"Why do you think it would be for you?" I asked her, deflecting her question with a question. "Didn't you see that huge pile of presents we have at home?"

"Well, I thought you wanted to order a swing set," she pointed out.

It's no secret in our house that (a) Rachel wanted a swing set and (b) that I'd been scouring Craigslist for one of decent price and shape.

"I didn't order a swing set," I told Rachel. And that's true—you don't order things from Craigslist. "There's no way we could afford a swing set like that!" That is also true.

"Well, maybe you just borrowed some of Dad's money without him knowing," she suggested.


She obviously needs a lesson on home finances because (a) it's not "Dad's money" and (b) I'm not the spend-happy one in this relationship (a miserly miser—that's me). She quickly recanted that idea.

"No, no," Rachel said. "That would be like stealing. You wouldn't do that."

"You know what your problem is?" I asked her. "You take after your father. Do you know what he did when he went to Utah for Grandma Sharon's funeral?"

I then related the following tale:

The girls laughed about the story a little.

"Just because you see something you like doesn't mean it's yours," I explained.

By that time we were just about at our friends' house. Or perhaps we'd only made it to the winding road between our house and our destination and I asked the kids to hush up so I could concentrate. Either way, we didn't speak of the swing set again until we'd wasted away the afternoon playing and making sugar cookies (while the swing set sat in secret in our backyard) and had headed out to our dinner appointment.

I had told Andrew about our close-encounter with the swing set and we decided that some gentle teasing would further ingrain the idea that thinking the swing set was intended for her was a silly idea.

As we were driving we pointed out a few things and asked her if we could have them.

"A basketball stand! Is it for me?" I asked.

"You guys!" Rachel said. "I get it. You can't have everything you see. Mom already told me that."

"Can I have that car?" Andrew asked. "It's a little banged up, but it would be nice to have."

She couldn't even finish the saying because Andrew and I had burst out in such gut-wrenching laughs that she had no choice but to join in.

This morning we set out a puzzle with the stockings that had a secret message for the girls to put together. "Hey, kids! The best surprise is in the back!" it said. They still couldn't figure it out so I told them to get coats and shoes and head to the back yard and we'd hunt around out there. I went ahead of them so I could film their reaction.

They were pretty surprised. I expected them to jump up and down and squeal with delight (since that's what they were doing over the cheap-o dollar store stocking stuffers) but instead they were too shocked to do much of anything but stand there stammering, mouths agape.

I love that I had to invite them down to play. They just couldn't believe it was for them!

They spent a few minutes trying it out but decided it was too cold to play (it was just below freezing) so we went inside to have breakfast and finish opening presents and to change out of fancy princess dresses while we waited for it to be warm enough to enjoy it. They had a blast!

(There aren't many pictures of Rachel but that's because (a) she is wild and won't take time to slow down for a silly thing like a picture and (b) I was busy shadowing Benjamin, who still managed to get plowed over by swinging siblings a couple of times). 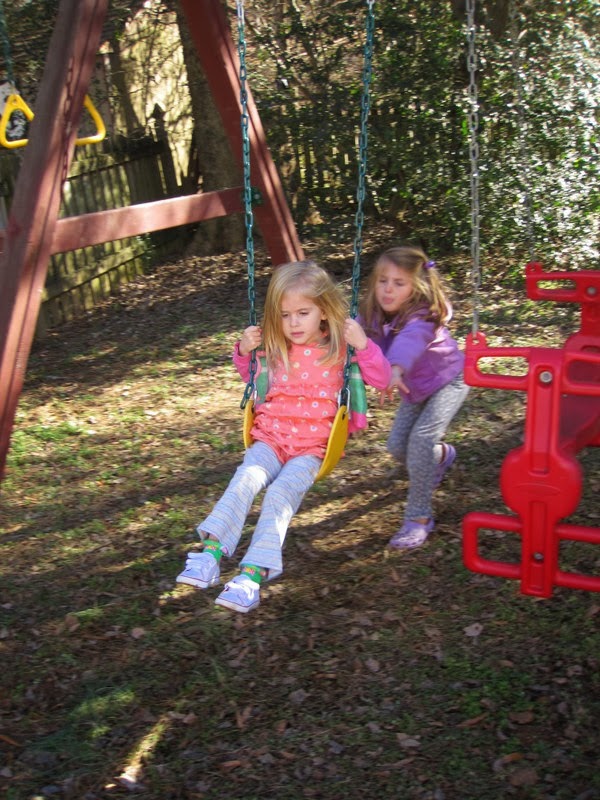 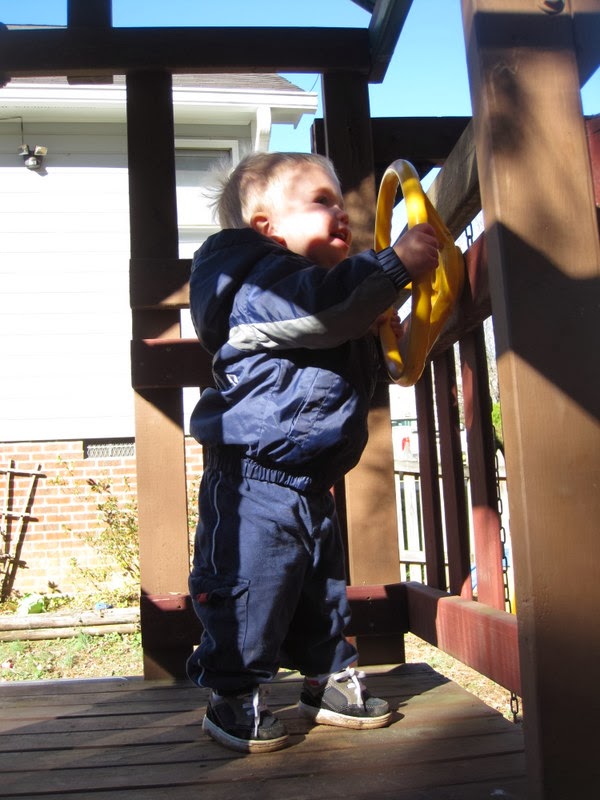 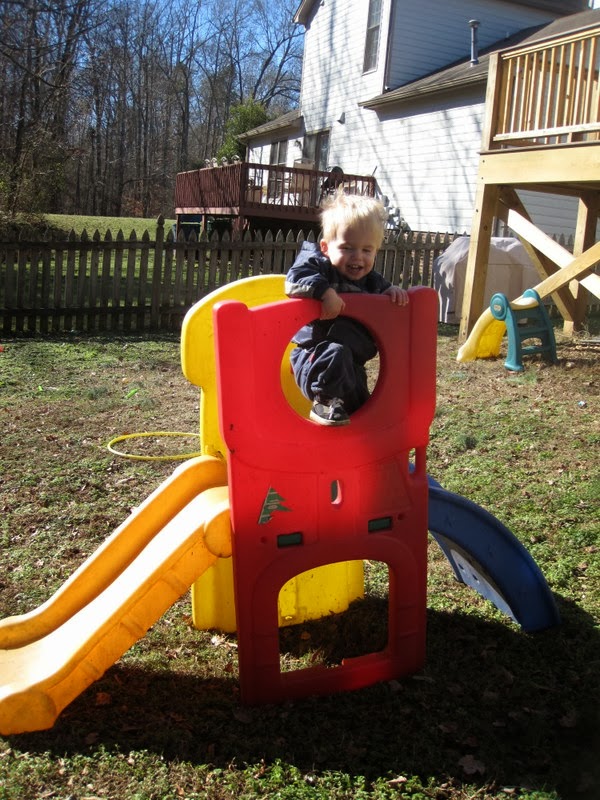 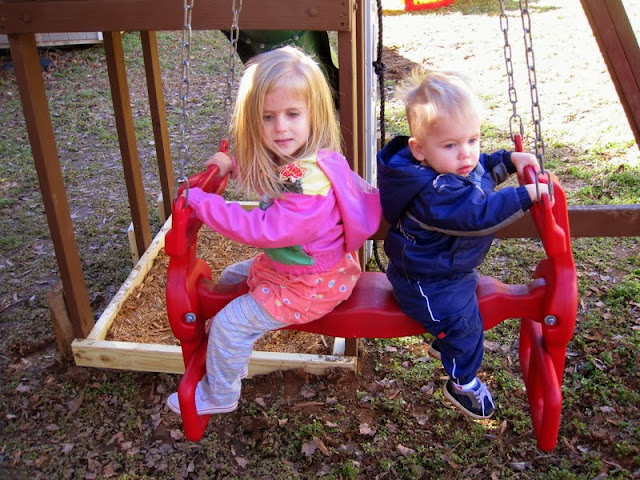 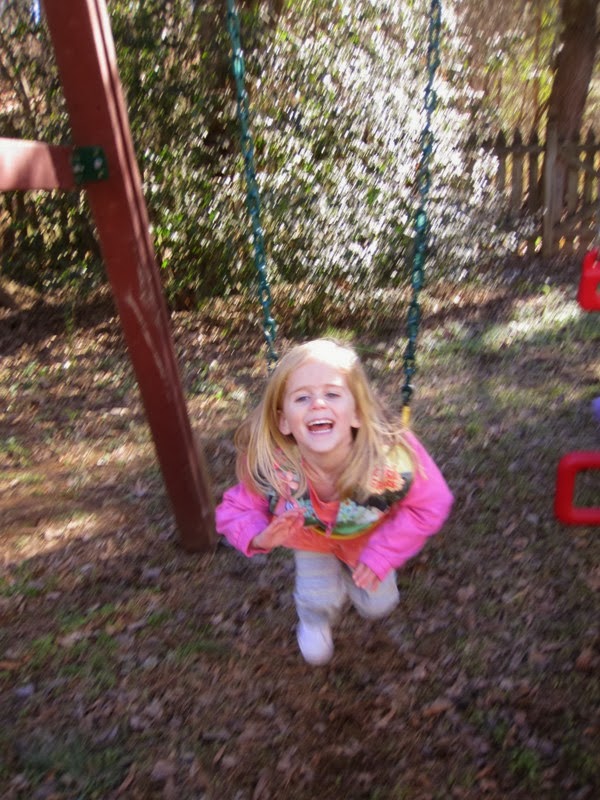 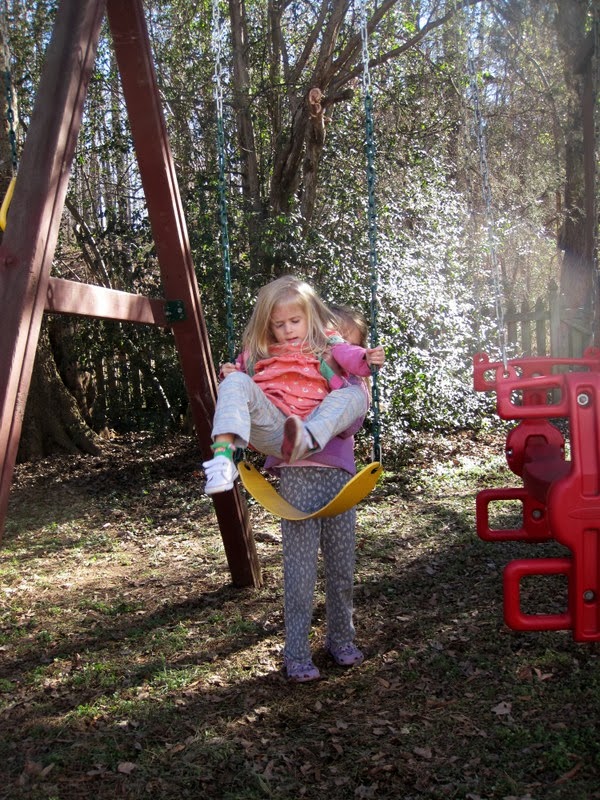 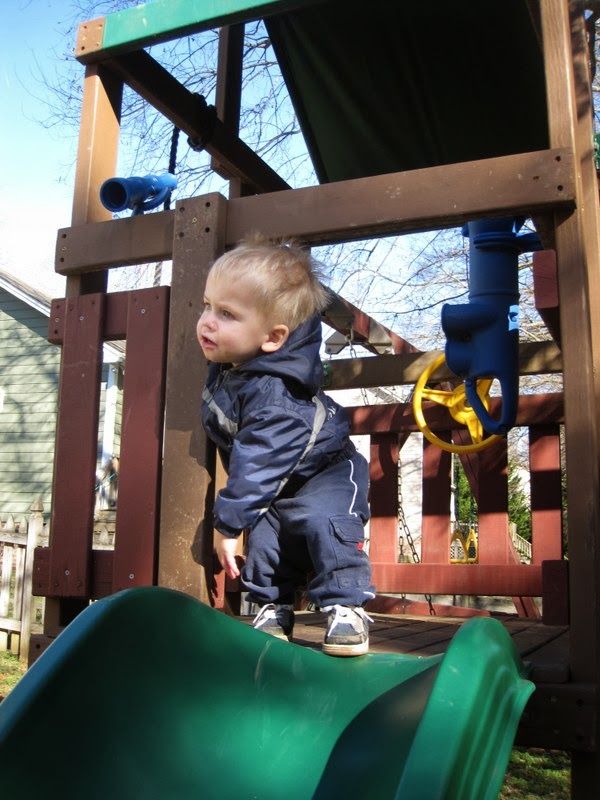 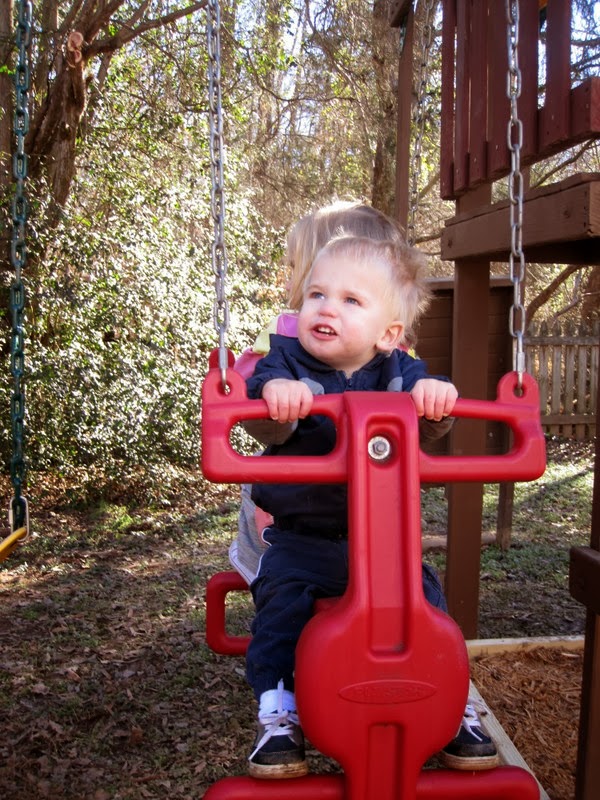 I think this will end up going down in family history as a Christmas miracle. After spending sixteen months trying to score a swing set on Craigslist (I can't tell you how many ads I responded to)—and listening to Rachel complain about our "boring backyard" and beg for a swing set for sixteen months—it was such a blessing to find such an amazing swing set listed for free! It's even more of a miracle that I saw the ad mere minutes after it was posted and that I was the first to respond.

It was a definite answer to prayer.

Furthering the miracle was finding someone willing to store the thing for us until Christmas—someone so caring and giving that they offered to help us both fix it up and set it up—and for the many other helpers we had along the way. The friends who babysat while we went to disassemble it. The friend who lent us a truck so we could transport it. The troupe who arrived to erect it in our yard. The friends who let us invade their house on Christmas Eve. So many people helped make this a wonderful surprise for our children. It truly is a Christmas miracle (at least for our family). Thank you to everyone who helped out.

I foresee many happy hours passed away in our now-exciting backyard (and perhaps a few broken arms...but mostly I just see happiness).
Posted by Nancy at 10:22 PM