When we moved out here I never imagined that we'd ever host an informal family gathering. I knew we'd have visitors, certainly, but casual family dinners? I thought those were a thing of the past.

But Andrew has a cousin who lives in Raleigh and we've had them over three times now...which really isn't a great track record considering we've lived here three years. But still.

About five months ago, Andrew's cousin Scott—or, rather, his wife, Angel—had a baby boy and we had never met him so I messaged Angel to see if we could get together for dinner sometime. She messaged back to say that would be great and that Scott's parents (Andrew's aunt and uncle) were going to be in town in May. She originally suggested May 24th but I said I was going to be 39 weeks pregnant then and didn't know that I would up to hosting a dinner, so she suggested May 3rd instead.

It's been on our calendar for quite a long time. And then Grandma asked if she could come that very same weekend, so it all worked out perfectly (and not only because Grandma got to see her brother, but also because she cooked (which meant I didn't have to))!

Angel commiserated with me about gestational diabetes because she had it, too.


"You don't look like you'd have diabetes!" she said.

But you can't judge a book by its cover, nor can you judge insulin resistance on body type, I guess. You can exercise and eat healthy and still wind up with gestational diabetes (and sometimes type two diabetes in my family) all because of stinky genetics (sorry, children). Just ask my tall, thin, farmer/archer/daredevil of a grandpa. Admittedly, he had a bit of a sweet tooth and he was a sugar beet farmer (coincidence?) but I really don't know how many sweets he ate because my grandma was quite the health nut. Though I really don't know if this was a change she made later in life while trying to manage his diabetes or if she always was that way. I never knew of her to bake anything—not cookies, pie, or cake (maybe a cake once), though her fruit salad was to die for.

Anyway, all I'm saying is that tall, skinny, physically active people who eat vegetables regularly and shudder at the very idea of going through all the work required to bake cookies can get diabetes as well. Trust me.

Rachel loved playing with her little second-cousin; though I think she made his parents a little bit nervous she did a great job with him. She's excited to have a baby in the house full time (and I'm excited for a capable mother's helper this time around)! 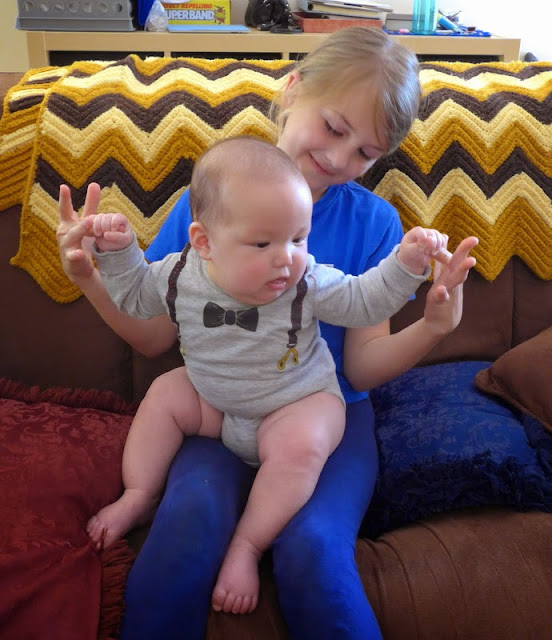 Uncle Clark was an immediate hit with the kids; he's a lot of fun. Benjamin didn't take long to learn his name: Unky Cahk! Unky Cahk!

Here's a group picture of everyone but me (Karen asked if it would be okay if some of us were standing in the sun and some in the shade—the answer is...probably not): 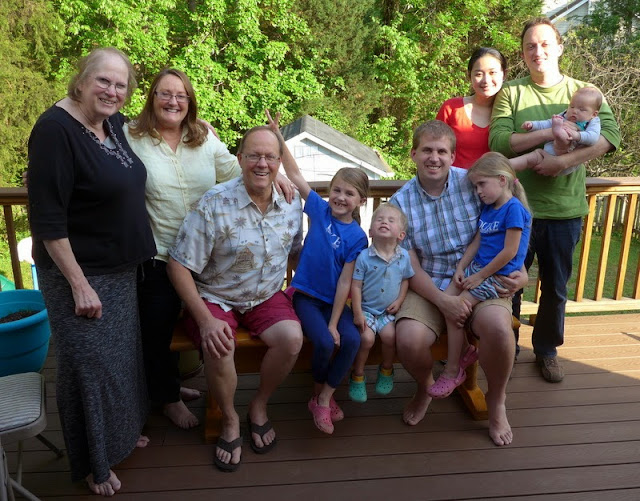 And here's one of everyone except for Aunt Lynnea (with the same sunshine problem): 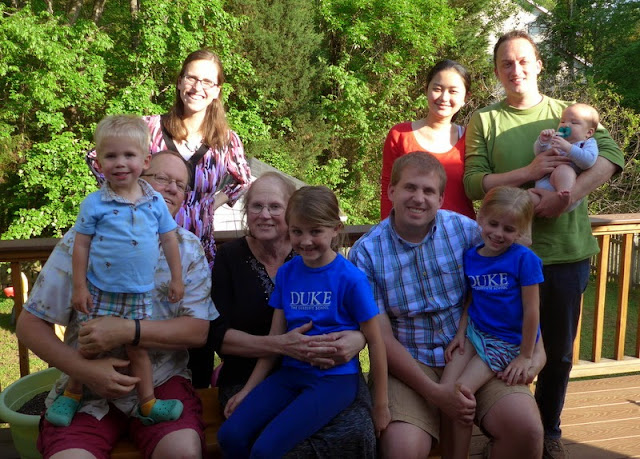 Scott asked us what our plans were after graduation (in a few of years) and we mentioned that we'd eventually like to live abroad again, but that we'd be happy with a job anywhere. He nodded and said that he totally understood that. He met his wife while he was working in Taiwan and they got married there and then lived there for a while before (surprise!) moving to North Carolina. Living abroad is still ordinary, everyday life...but with a hint of adventure at every turn, Scott explained. He said he keeps telling Angel he wants to move abroad again and she's like, "What do you mean? This is abroad for me!"

It was so fun to get together with family while we're so far away from everyone else!
Posted by Nancy at 10:24 PM