As we sit, Hurricane Joaquin is knocking on our door. After waiting for it the whole day long, we're finally hearing the first splatters of rain. Our neighbours across the street said we're welcome over there, up on their hill, if the creek gets too feisty in our backyard. I'm sure everything will be fine, though we already sustained some water damage this week.

I was watching a two-year-old boy for a friend this week—Baby Jay—and he opened our new kitchen cabinet (the one that Andrew bought when Zoë was one week old, the day Uncle David arrived to help out (and swore he could put together in the half hour before he had to leave for the airport to pick David up, but he was way wrong and everything was in shambles when David arrived)) and started pulling things out.

He'd spent the whole morning pulling things out, actually. And not just from the kitchen cabinets.

It made me (momentarily) grateful that Benjamin's three and is (mostly) beyond pulling things off shelves for no good reason. Don't get me wrong. He still pulls things down, but usually he'll at least do stuff with what he pulls down. For example, he'll pull books off the shelf to "read." And then he won't put them back, of course, but at least he's reading them and not just tossing them over his shoulder because pulling things off the shelf is such great fun!

Anyway, I was nursing Zoë while Jay was getting into the particular cabinet he was getting into so I sent Rachel over to stop him (hallelujah for having older kids around). She led him away from the cabinet and then started putting stuff—mostly food storage—back in.

"I don't really know what to do with this jug of water," she said.

"Well, it goes back in the cabinet with the other jugs of water," I said.

When Zoë was finished I went to see what damage had been done and was sad to learn that the jug had sprung a slow leak awhile ago. The gallon jug was half empty (or half full?) but there really wasn't very much water to mop up. The particleboard shelf—of our beautiful brand new cabinet!—had been thirstily soaking it up and it was now warped...and slightly mouldy.

I was at once frustrated and grateful.


Thank goodness we had a two-year-old over to pull everything out of our cabinets so that we could discover the leak sooner than we would have discovered it otherwise, but, ugh! I was so upset about our cabinet!

We've been keeping the doors open so that it can air out and the contents of the bottom shelf are scattered wantonly across our kitchen floor. It's a little chaotic. I'm sure I'll feel much better about things when I can restore some order to that corner of the house.

We had little visitors over on Monday morning, too. Our house was a disaster (it always seems to be) and I wanted to get it picked up a bit before our friend came over. We had to be up and fed and dressed by 9:00, which is asking a lot in this house. I was busily pumping and the kids were getting breakfast for themselves, when Miriam wandered over to show me how the sugar/flavour in her instant oatmeal packet had clumped together.

She tripped as she approached me and oatmeal flew everywhere.

I suppose I should be grateful that it was dry oatmeal because that can just be vacuumed up (and I was planning on doing a quick sweep/vacuum before my charge for the morning arrived) but, honestly, it flew everywhere. I had oatmeal in my lap, in my toes, in my hair, on my chair, on the floor all around me, on the carpet. Wet oatmeal would have just fallen in one clump, right? Or maybe we make our oatmeal too thick. I like thick oatmeal.

Miriam got a reminder that food stays by the table. Even if it's really cool. And especially if it's something that will make a huge mess.

This morning Miriam decided to have oatmeal for breakfast again but she was so excited about her birthday that she couldn't concentrate.

"It's the first day of October," she sang cheerily as she walked out of her bedroom. "My birthday is in 25 days. What day is it on this year? I don't care. Can we do my birthday on a Saturday?"

"We'll just do your birthday on whatever day it falls on," I said.

"But we have to have cake," she pointed out.

"Yeah, we can have cake any day of the week," I told her.

"We can?!" she said. "But we have to have candles, too. Can you have candles on a cake any day of the week? My birthday is only 25 days away. We really need to figure this stuff out!"

"You can have candles on a cake any day of the week," I assured her.

She continued to blather on and on about her birthday while she fixed breakfast. She opened her oatmeal packet, dumped it into a bowl, tossed it in the microwave, set the timer for one minute, and talked my ear off about birthday, birthday, birthday.

I was a captive audience, you see. I had no where to run, no where to hide. I was stuck in my rocking chair feeding the baby. Or maybe pumping. I can't remember which I was doing, honestly. My morning usually goes feed, pump, feed before I'm able to do anything else. Finally the microwave dinged and Miriam skipped off to get her food.

For the record, burnt oatmeal does not smell nice. I kept on with what I was doing (feeding baby) while Miriam remade her breakfast. Everything seemed to be under control. But, ugh, that smell though!

"The smell is getting worse and worse," I chatted to Andrew (who was already at school).

I hadn't thought to check, quite frankly. The girls were both relatively calm about it so I was, too, but suddenly I was feeling a bit less calm. I stopped nursing/pumping (whichever it was) and ran to the kitchen.

Smoke was spilling out from under the kitchen sink. I pulled open the door and yanked out the garbage can. Her oatmeal had cooked into a little oatmeal coal and was burning its way through our trash. The bag was all melted and the garbage was smoking terribly.

"Miriam!" I said. "Was the oatmeal on fire when you opened the microwave?"

"Well, not really. It was just really smokey and a little bit flamey."

"Okay, well, we don't put fire in the garbage can," I said—just your typical never-thought-I'd-say-that moment. "If that happens again put it in the sink and turn the water on!"

My kids are going to start to think the sink will solve all their problems.

Leaky water jug? Put it in the sink.

Flaming oatmeal? Put it in the sink.

Just not with the fire, if it can be helped.

I ran the garbage outside and put out the fire (tied that puppy in a knot and beat it on the ground then left it beside the garbage can to get rained on until I was sure the fire wasn't going to resurrect).

I'm pretty sure we need to test our smoke detector though because I was sitting there having a mental conversation with it.

But at least we still have a house. And we learned some good life lessons—like if things are even just a little flamey we don't put them in the trash!

This, though? This is going in the trash. Goodbye, IKEA bowl. It's been a good five years. 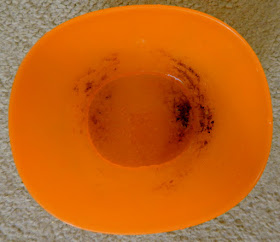 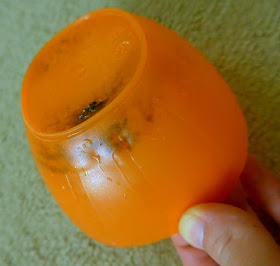 At dinner, Rachel pointed out how funny it was that we had a water crisis on Monday and a fire crisis on Wednesday. The impending hurricane fringe weather gives us air...and a lot more water. And as for land, Andrew finally was able to mow the lawn this afternoon (it's been like five weeks; it was bad) so we've tamed that, too. We're so in tune with our classical elements. Just like...Daler Mehndi.

And if you're wondering if we played this song at our wedding reception and made everybody dance to it, the answer is...yes. Yes, we did.
Nancy at 11:22 PM
Share