Let's start at the very beginning

My birthday this year was a million times better than last year! Let's list the reasons why, shall we?

Yup. That just about sums it up.

We had a relatively tame day, just relaxing by the pool while Grandma and Grandpa went to the temple for a wedding. The pool is pretty awesome, though the bottom of it is made of a gigantic emory board or something. The upside is that my feet have been stripped of dead skin and are silky smooth. The downside is that all of my skin junk (and everybody else's) is just floating around in the water. Yum, yum.

But the water was warm and wonderful so I put my thoughts of swimming through people's foot gunk aside and enjoyed the pool. It's mostly about 3 feet deep, with a zero-entry side (Miriam's favourite), a water slide (Rachel's favourite), a splash pad (Benjamin's favourite), and a "deep" end (4 ft. 10 inches) where the grown ups didn't have to be all hunched over to be completely in the water (our favourite).

We spent all morning at the pool.

Here's Benjamin at the splash pad: 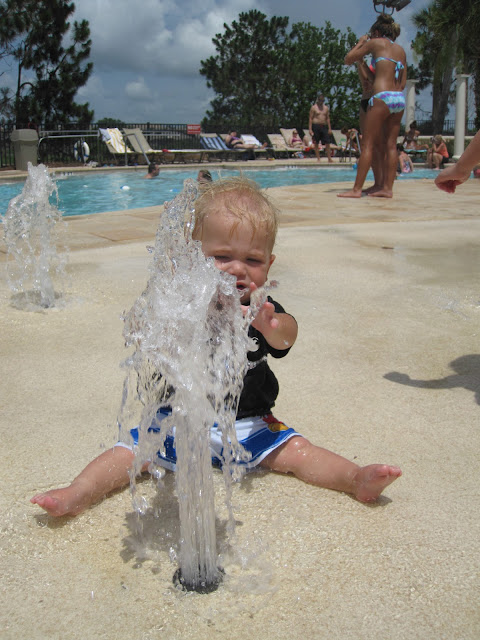 Here's Rachel going down the slide: 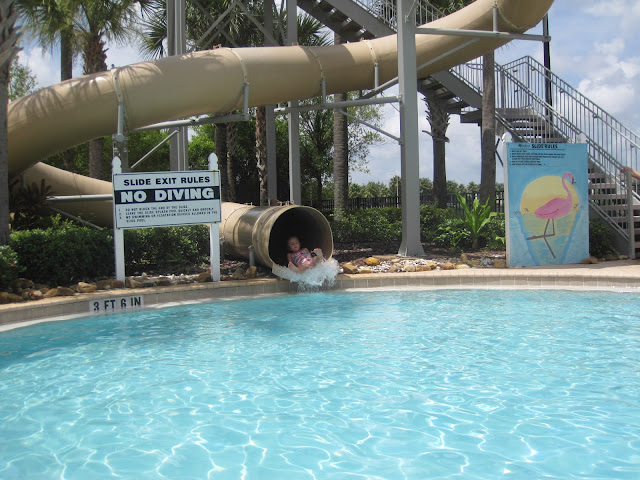 And some more pictures of Benjamin and Miriam enjoying the splash pad while we watched Rachel go down the slide over and over and over again (Miriam wanted to try the slide but she wasn't tall enough): 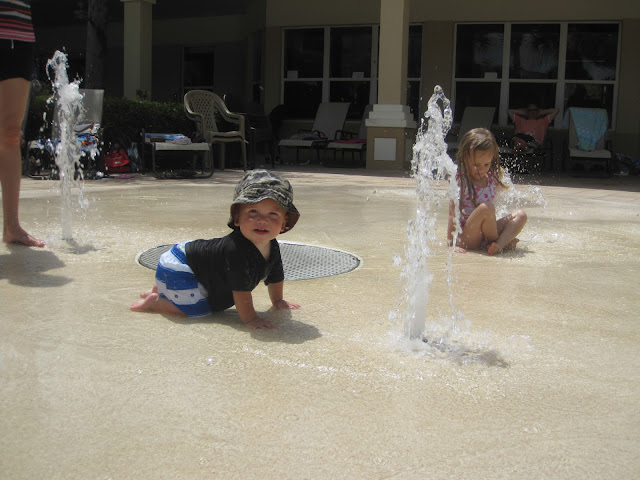 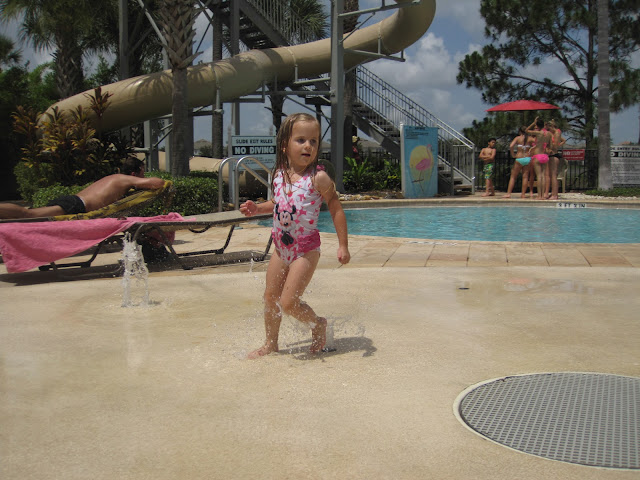 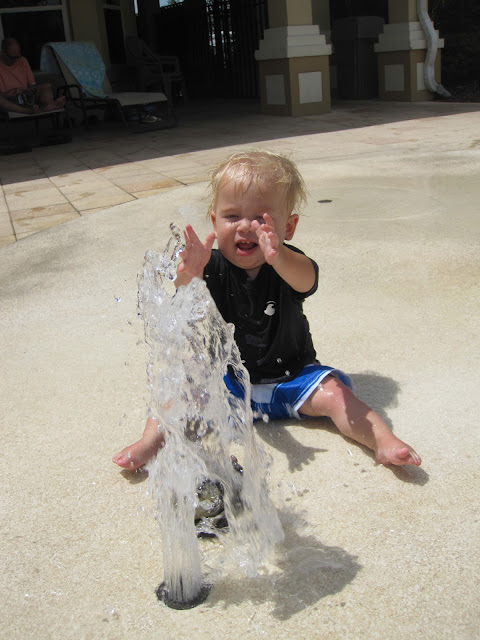 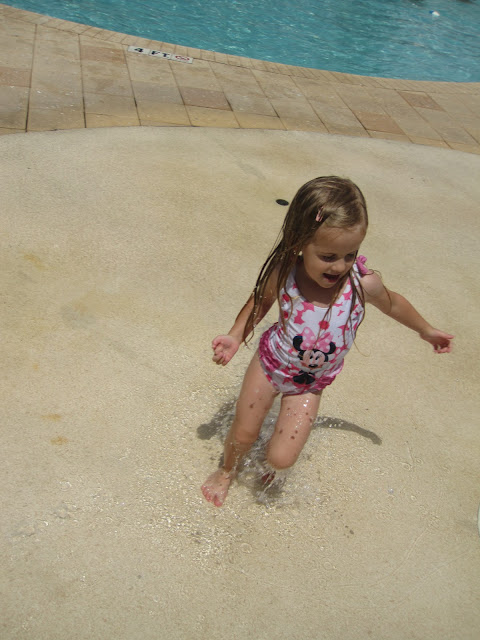 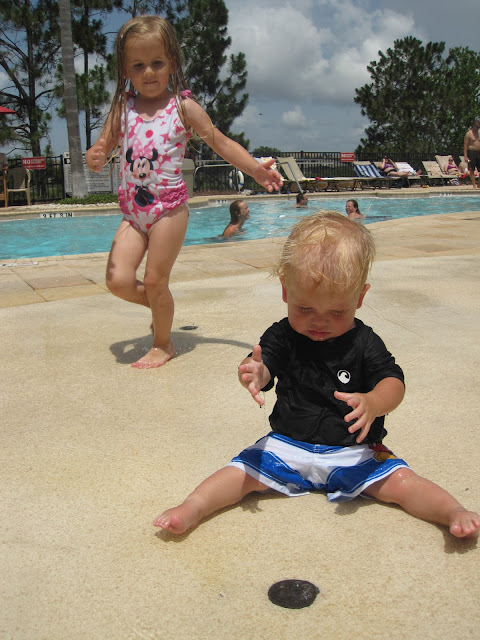 Miriam spent far too long standing over the water fountains. More on that later. 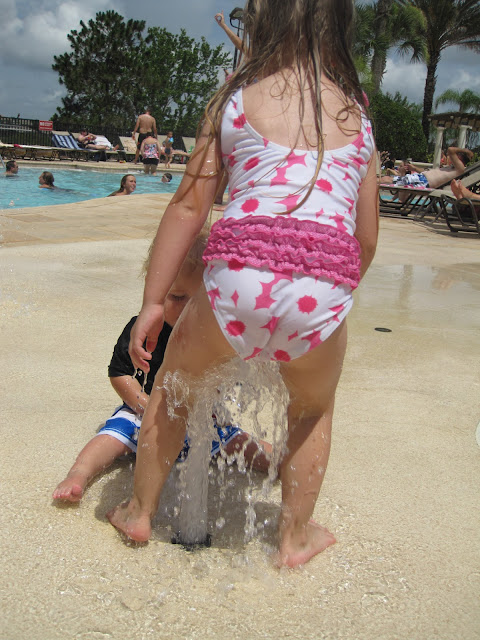 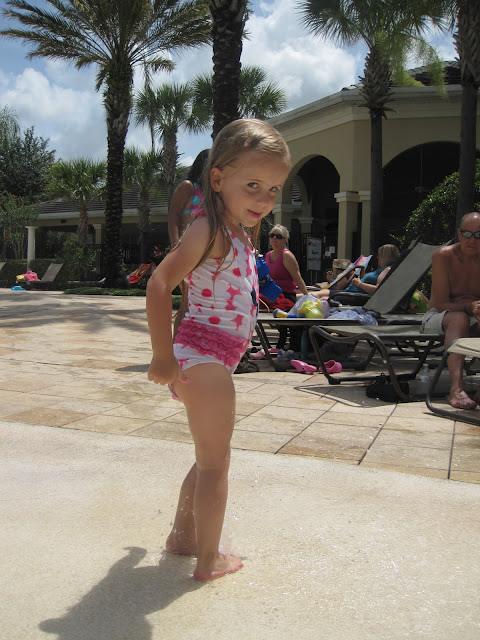 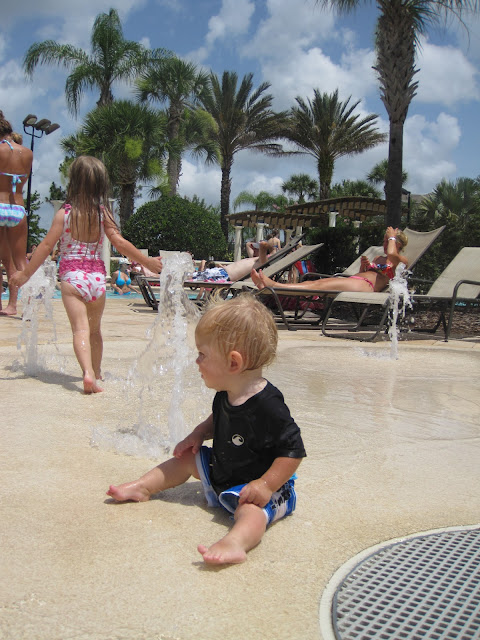 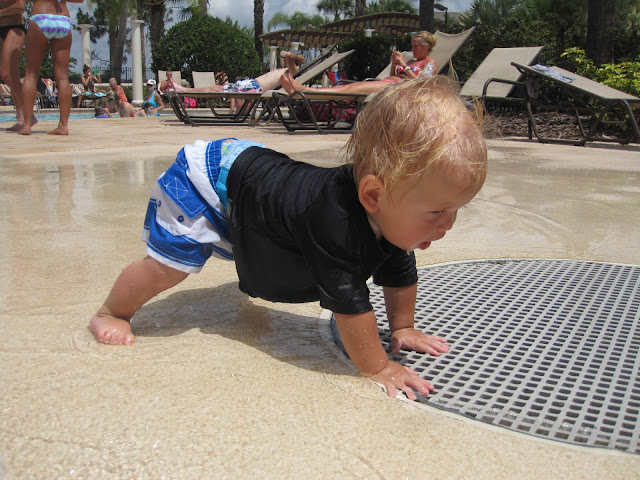 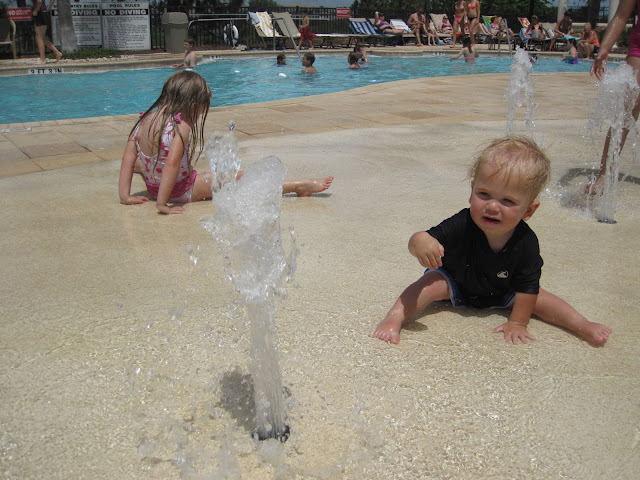 Here are the kids at the zero-entry side of the pool: 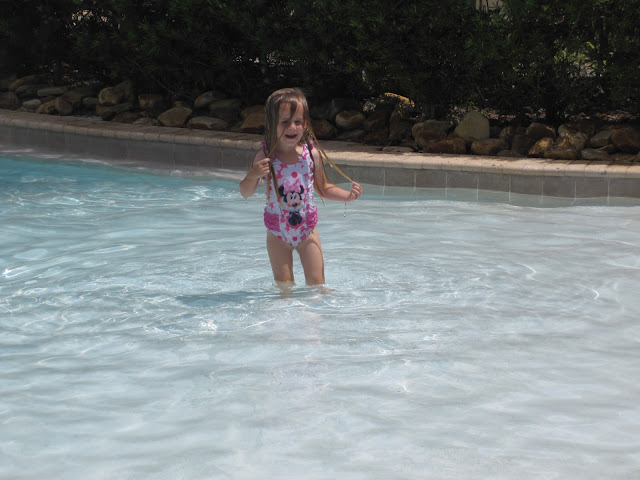 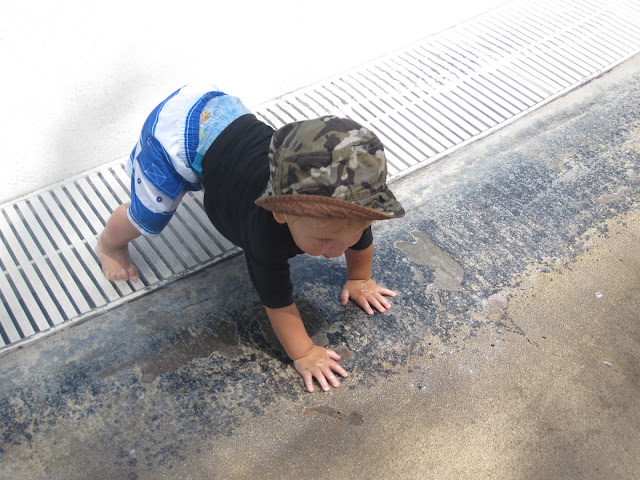 Benjamin eventually fell asleep while we were wandering around in the pool so we went back to the condo for lunch/nap time. 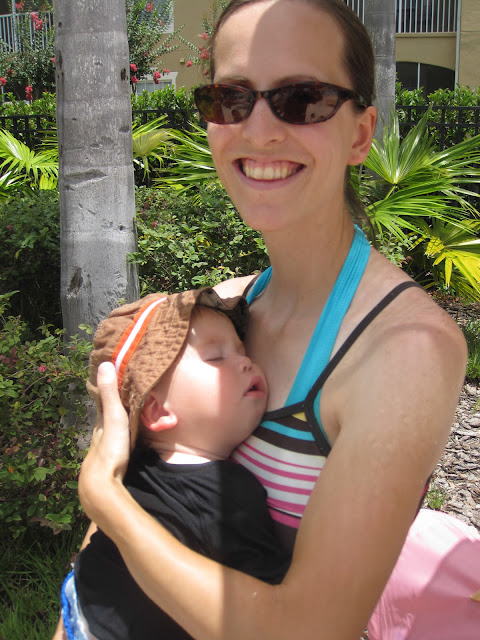 After Grandma and Grandpa got back from the temple we headed back to the pool with Grandpa. Rachel has morphed into a swimming sensation this past week. She can swim across the deep end by herself, can float on her back forever, and isn't afraid to try anything. She spet a lot of time horsing around with the grown ups—being tossed into the pool and so on—and eventually swallowed some water wrong and began coughing, which meant she was going to throw up (it's inevitable). I rushed her to the side of the pool and she vomited into the bushes. Nice.

Not too long after that, Miriam and Grandpa came back to the pool from the splash pad. Grandpa hailed me over. "You've got a big problem," he said and then walked away, leaving me with Miriam, who had poop rushing down her legs. She'd successfully given herself an enema. Awesome.

Fortunately, she hadn't quite made it to the pool so no poop was introduced to the water. Thinking of High River, whose water system has been compromised with the flood, and Lindon, whose water system was contaminated with e-coli, and given my background as a lifeguard, I was thrilled that she had only pooped on the deck. It wasn't exactly a joy to clean up, however.

We left after that (as inconspicuously as possible because we were "those people") to go back to the condo for dinner and birthday cake. Dinner was spaghetti. Birthday cake was a masterpiece (lemon (from a cake box, made by Andrew) with vanilla frosting (applied by Grandma), and a generous spritz of sprinkles (by Rachel and Miriam)). We didn't have any matches so Andrew lit a roll of paper using the stove burner in order to light the candles. 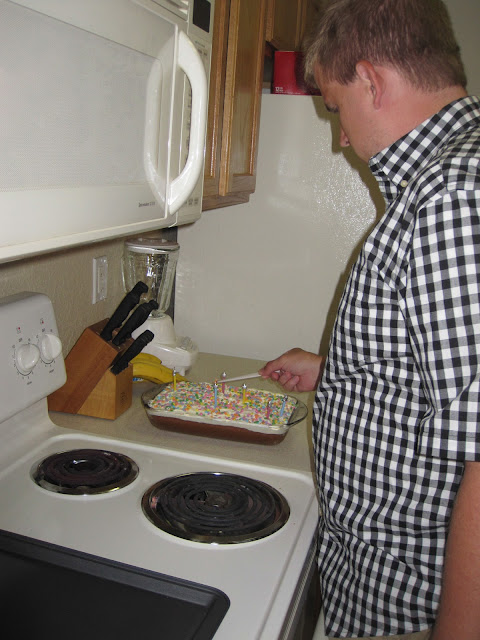 Everyone sang happy birthday to me and then we all enjoyed the birthday cake: 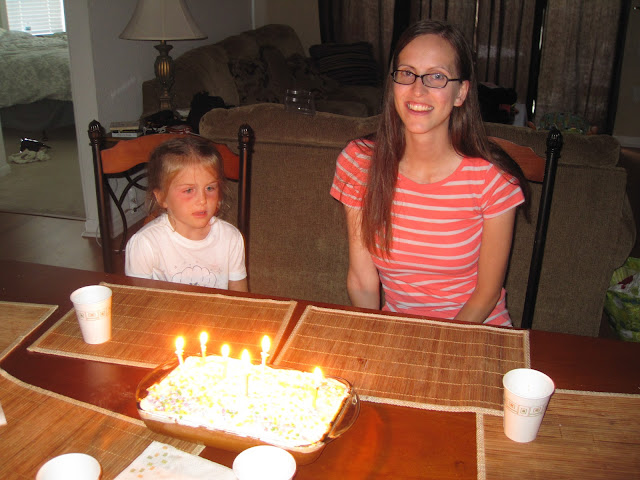 Even Benjamin liked it: 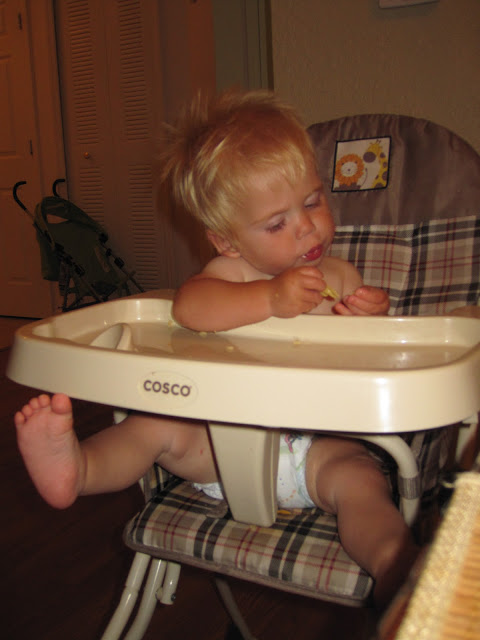 Andrew hadn't gotten me a present, which Rachel thought was perfectly unacceptable.

"You have to give people presents on their birthday!" she said (even though the girls didn't realize that we didn't get anything for Benjamin this year until a week or so after his birthday (and then demanded a redo)).

"Florida is your present," Andrew informed me. "Happy birthday."

"You got Mom all of Florida?!" Rachel asked. "Wow. Mom—all this is yours!"

She was pretty excited about that. But having all of Florida is kind of a big responsibility so I'll take the memories instead. Grandma saved my birthday (according to the obligatory-presents rule our girls follow) by bringing out gifts from her and my mom. My mom sent a shirt and a card (which all my family back in Utah had signed) and Karen gave me a card with some money in it.

When Rachel saw the money she gasped and said, "Mom! That's money!"

She's not precisely in the dark about our financial situation because we've been joking about how destitute we are for years. Joking, I suppose, because while we're technically below the poverty line we still manage to have a relatively cushy lifestyle. Our family is supportive of the perpetual education cycle we're stuck in and they shower us with enough gifts and vacations and such to keep us ridiculously happy. We live in a land of plenty and could easily live off of other people's off-casted goods for years to come. We have a modest stipend that pays for rent and gas and groceries. We're good. But, technically speaking, we're poor. So we have a rule that the kids can't ask to do anything that costs money. I suppose it's not so much of a rule as it is as an understanding.

The children understand that if they ask to do something that costs money we'll say no and then brainstorm alternative (and free) activities.

"Oooh! The fair! Let's go to the fair!" Rachel said once when the fair was in town.

"It's twenty-five dollars to get in!" I read off the sign. "It would cost $100 just to get into the fair! We can't afford that! Let's go to the Life and Science Museum sometime this week instead."

The Life and Science Museum is one of our fall-back ideas for when the kids want to do something fun. We have a membership there, see, and have gone enough times to pay for it several times over.

Anyway, the kids know they can't ask for anything that costs money or we'll say no. And if they ask why we'll usually just tell them it's because we're poor. So they get really excited about money.

The poor girl doesn't exactly have a concept of money. We took the girls to Pelican's for snow cones once and Rachel, very satisfied, sighed and said, "We should go there every day!"

"You still have to pay for everything you buy on a credit card," I explained. "You just pay later."

No, but that would be awesome, wouldn't it?

Anyway, she was so excited about the money I received for my birthday because it would help our family's financial situation. She also frequently donates loose change to our family's cause. She's a sweetheart.

On Sunday morning we woke up and drove to Tampa to go to church and visit with our friends, the Lewises. We love the Lewises. They lived in Cairo when we did and we'd babysit their children when they'd go out of town, Andrew tutored Jessica in math (Jessica, who graduated from high school and will be on her way to BYU shortly), and Rachel was pretty sure she was a part of their family.

It was so fun to see them again. They're all exactly the same—just a little taller and older.

Megan is just as hilarious as ever. At one point all the "grown ups" (including the teenagers (even Emma, who should still be eight years old, was there and she was so excited we were coming that we were written on her calendar with more circles and exclamation marks than "last day of school") were talking in the living room when Megan wandered in, said, "I sensed my presence," and then wandered back out. It was hilarious. 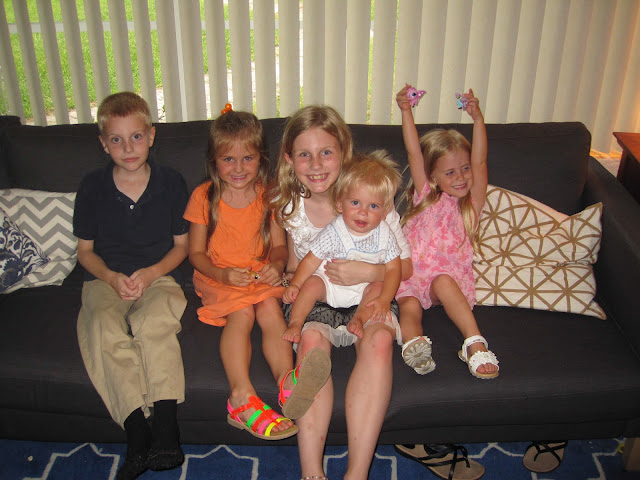 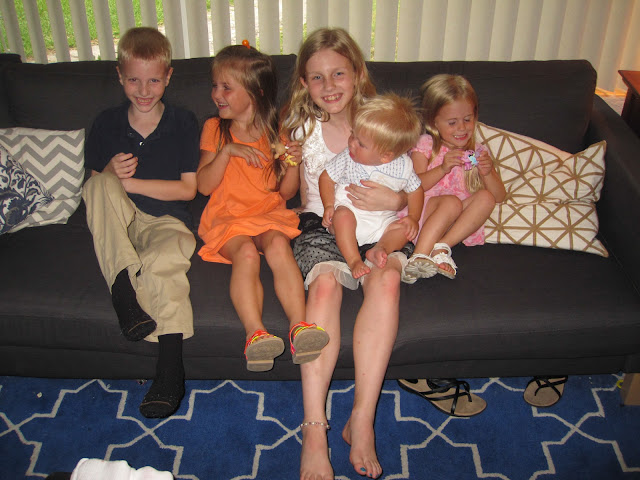 When we were all in the hallway at church, Megan was busying herself with all three of my kids (turn about is fair play) and a woman wandered by and crooned, "Oh, look at all those sweet little girls."

"Uh, this one's a boy," Megan said, pointing to Benjamin and speaking with a hint of annoyance. "He's got anchors on..."

It was so nice to see the Lewises, even if it was just for a day. Kevan, though, was a little surprised when Sara told him we were coming down.

"Why are they coming all the way out here?" he asked.

"Probably to go to Disney World and stuff," she said.

"Well, why don't they just go to Disneyland? It's right there..."

"Because they live in North Carolina," Sara explained. "And Disney World is right here."

I think we moved out to North Carolina a month or so after they moved to Florida. It's nice to have such good friends in the same time zone even if they live ten hours away.

We didn't get a picture with all the Lewis kids because they left to go to the fireside before we left to go back home. On our way home we drove by the temple and wanted to walk around it but unfortunately the gates were locked and there was no nearby street parking. It's a beautiful temple, though. I wish it could've been a little more accessible. Perhaps with the new missionary efforts (church buildings open during the week for tours, etc) the church will soon consider having temple grounds open for visitation on the Sabbath. It would be nice.

During the drive Rachel and Miriam entertained themselves by playing with the Littlest Pet Shop toys Megan had given to them. At one point Miriam's pet was trying to liven things up a bit.

"Want to go to the circus?" her pet asked Rachel's.

"Do you want to go to the movies?"

Miriam had had enough. "Being poor is silly!" she pouted.

"It's not silly," Rachel objected. "It's just not great!"

We think that would make a good bumper sticker: "Poverty: It's Just Not Great." But at least it's not silly. There's an upside to everything.
Posted by Nancy at 6:33 PM