My mom and brother drove me up to Salt Lake to visit with our Heiss relatives on Tuesday (September 13), which leaves me wondering what we did on Monday. Probably just recovered from having visited so many people on Sunday, honestly.
Andrew asked me what we did while we weren't doing our (honestly few) social things and it left me gasping like a goldfish.
Blub. Blub. I dunno. Blub. Blub.
I mean, I did have a couple of meetings for school/work and tried to find time to do some of my readings. But...I...dunno...we just...hung out. Went for little walks to soak up that view of the mountains, a view which is familiar and intoxicating in a way that the trees and forests surrounding our home to the east is not (although I love all the trees, and I love Appalachia, so can hardly explain the allure of the Rockies, but it's there).
Doesn't matter. I'm sure Monday was wonderful and restful. I'll look at my pictures later to see what we did that day.
Tuesday we headed up to visit with the Heisses. Everyone was so excited to meet Phoebe, of course, who in turn couldn't understand why everyone was so excited to see her and wanted only to sit on my lap. But then Grandpa Frank brought out a great big teddy bear for her to play with and she timidly slid off my lap and then darted across the floor to tackle it.
She loves stuffed animals almost as much as she likes live animals.
Phoebe surprised me by willingly sitting on Grandpa Frank's lap for a picture. She didn't fuss or squirm, just sat and munched on her little toy banana. Very brave, if you ask me. 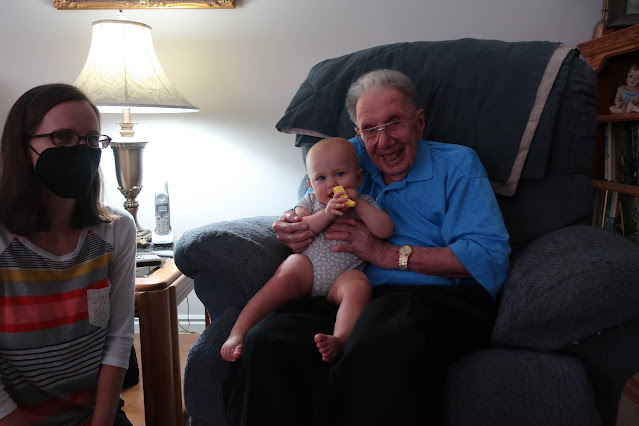 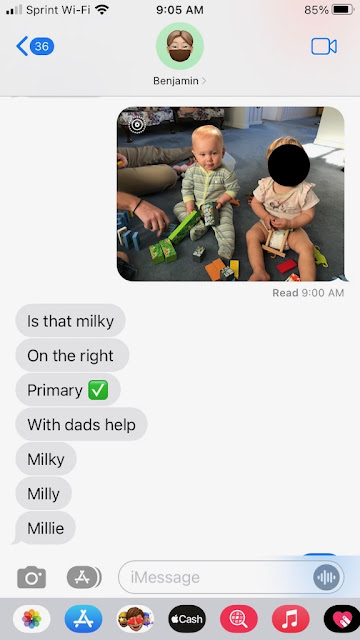 Benjamin texted back, "Is that milky on the right? Milky. Milly. Millie."
Autocorrect got him good!
Read more »
Posted by Nancy at 11:38 PM No comments:

I will slowly make my way through the week that I spent in Utah...beginning with our flight out, which was a lovely mid-afternoon flight. Grandpa drove us to the airport and dropped us off at curbside check-in, which meant I could check my luggage outside and walk through the airport with only my carry-on (plus a baby) in tow, which was nice.

Phoebe and I made it to our gate with plenty of time to spare, even though I forgot to take my computer out of my backpack (so they had to scan my luggage twice). Phoebe loved looking out the big window at all the airport happenings (and you can see her little air filter by her feet; I was so nervous about flying it's not even funny). 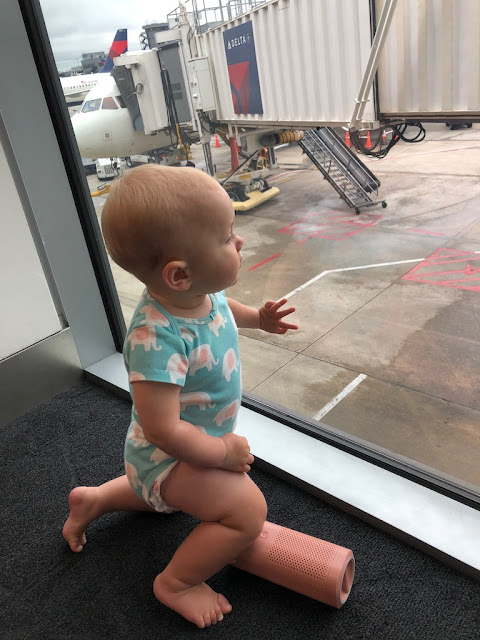 Saturday is a special day, it's the day that we arrived in Utah

One fun thing I did this trip is forget a card reader for the laptop, so I can't take any pictures off my camera. I do have several on my phone that I could use, but I've also had a very needy baby on my hands (and few reliable ways to distract her since she's a little bit...shy...around others). Still, it's been a wonderful—and rather relaxing—trip for me. Turns out that even when you have a high-maintenance baby along with you, that's still easier than managing multiple children. Go figure.
Ugh. I also just realized that Little Miss Let Me Play With Your Phone turned off the live picture capture...so now the picture that I took equals the picture that I get...and I'm a little sad about realizing that because...I'm wishing I could go in and choose the best shot. So hopefully someone out there took better pictures than I did on Saturday and Sunday (I'm looking at you, Patrick, Josie, and David, who all also had their phones "flashing," so to speak—send me all your pictures!).
Still, this picture of meeting Uncle David turned out well: 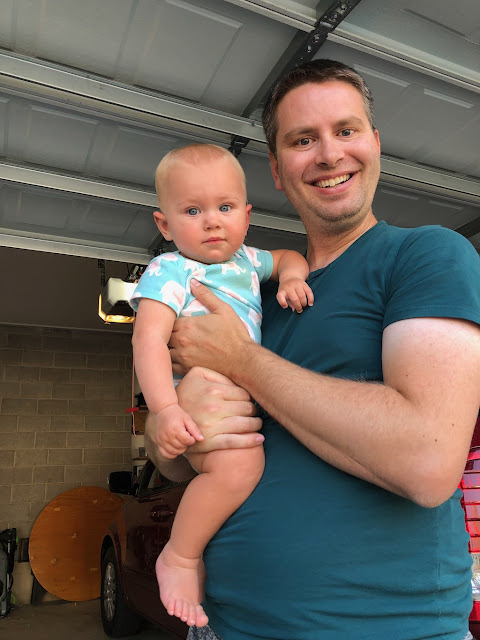 I didn't think I could get more stressed out today, but then I did!

Because I'm all about stretching myself, pushing my limits.

I'm trying to pack today while also finishing up a big chunk of my thesis proposal. And flying stresses me out anyway. And I need to, like, make sure everything is ready for the kids while I'm gone (it's not). And...just...I'm really good at stressing out about things...to the point of hardly being able to function...

And then I decided to pull out Phoebe's birth certificate.

Because some airlines like to see proof of age for lap infants. And also because it's a good idea to have, like, identification while traveling. So I get out our Very Important Papers and start sifting through them.

A neighbour posted a number of costumes she was aiming to get rid of, among them some lederhosen and a dirndl dress—both brand new, size 4T and 6T!! No one else was asking for these (though there were many moms excited about the other costumes being offered—Princess Anna, Olaf, etc.) so I thought I'd grab these, even though I didn't think the kids would want to use them for Halloween. Zoë, I know, has her heart set on being She-Ra.

Anyway, we took a stroll around the block this morning to collect the costumes and were excited to find that they fit perfectly. Zoë and Alexander have been wearing them all day! And Alexander has announce that this is what he'd like to wear for Halloween now (which makes life easy for me). 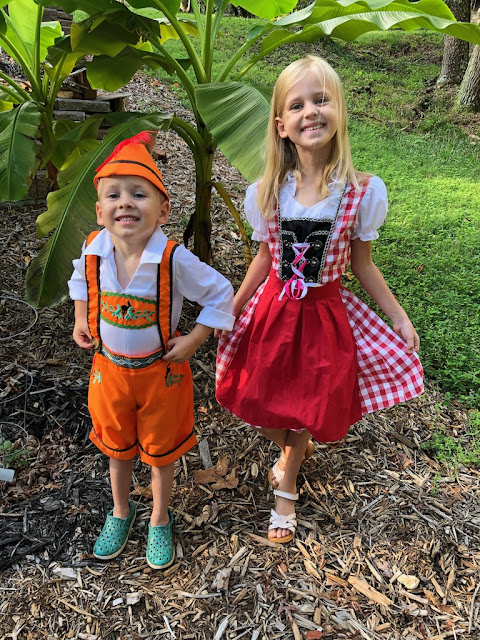 A little shout out

At long last, Miriam has finally finished writing up her essay about her trip to DC! You can read it over at her blog.

I had this thought that I should do posts about what we're currently reading...but I also know that I'm simply too scatterbrained to hunt down cover images and so forth (although that would probably make this post a lot more interesting) or to keep up with this in the long run (though perhaps one day when my thesis isn't looming over me). Anyway...

We are reading aloud Frankenstein; or, The Modern Prometheus, by Mary Shelley. By way of introduction we read She Made a Monster: How Mary Shelley Created Frankenstein by Lynn Fulton, which stayed very true to the information in the forward of Frankenstein. I also picked up a graphic novel of Frankenstein (edited by Jason Colby), which most of the kids have read, though I haven't read it yet, so they know what's going to happen while I...don't. They're being very good about spoilers.

What's extra fun (and unusual for us) is that Andrew listened to it during his commute the last little while, so he's able to hop in on discussions as well. It's not often we're all reading the same book at once (though now Andrew has finished and we have not)!

Zoë is (and soon Benjamin will be) also reading Wonder by J. R. Palacio, which is an interesting pairing with Frankenstein. They're reading this on their own, but Rachel, Miriam, and I have all read it so it's made for some good discussions.

I've been reading a lot about how to manage ADHD because, well, we still haven't gotten Benjamin diagnosed but we're experimenting with methods on managing ADHD symptoms, anyway. Just like I've never been diagnosed as a migraine sufferer, but when I've gotten migraines I, uh, treat them like migraines, so I limit exposure to light, have some caffeine, et cetera, etc. etc.
So, I was reading about video game therapy for ADHD. Studies (such as this one) seem positive yet...inconclusive. But, I did read some anecdotal reports from adults with ADHD, who treat themselves to a dopamine-generating activity prior to switching to a task that requires concentration. The dopamine rush they receive from, for example, playing video games transfers to the next task.
That's a pretty harmless thing to try, so we figured we could try it.
It helps that his math is a video game platform this year. We splurged for the online version of his math program, thinking it would save me from slogging through math with Benjamin quite as much. But it took him a month to get through the first unit. And at that rate...ugh.
So, yesterday, we sat him down to play Minecraft first thing in the morning, which he, of course, thought was amazing. When his timer went off, he immediately switched out of Minecraft and onto Beast Academy. And then he spent two super-focused hours doing math. He finished about half a unit, earning very good marks. And I just was floored, honestly.
We did the same today and he once again did excellent work. I told him that we will keep "trying" this for as long as it's working. But the minute it stops working, we can try something else.
Read more »
Posted by Nancy at 12:01 AM 1 comment:

Phoebe is a hair-puller, specifically of my hair. I mean, sure, she'll pull her sisters' hair on occasion, but she can't get enough of my hair. She loves to yank, yank, yank it, and no amount of "gentle" parenting has seemed to communicate to her that pulling my hair is a bad idea, so it's mostly been pulled into a bun for the past few months and...last night I had enough and asked Andrew to just chop it off.
Side note: I'm not against gentle parenting. I just find it annoying when parents are like, "Through my consistent, gentle parenting, little Johnny has learned to respect my earrings. He knows he can gently explore them, but not tug them. Gentle parenting is so worth it!!" And I'm just like, "Neat. I've spent months trying to convince her that she can stroke Mommy's hair but not pull it, but she still yanks on it while deviously cackling."
Like, I'm sure gentle parenting works the same way I'm convinced sleep training works.
A friend of mine (with one child) posted something recently about how people are always asking her how her baby sleeps so well and all she can say is "thank you, Baby Wise!" Or something.
And I'm over here going. Mmmmhmmmm...
Like, I love that you feel that worked for you. But I'm going to go with the sleep-expert lady whose video I recently watched, who said, "If you can successfully get your baby to sleep putting them down drowsy-but-awake...you might just have an easy-going baby!"
I've had one of those. One of those.
Read more »
Posted by Nancy at 1:14 PM 3 comments: