Rachel "graduated" from kindergarten today. I'm not sure how I feel about making a huge deal over finishing kindergarten, but since there was a huge deal over finishing kindergarten we went to support Rachel. It would have been devastating if we hadn't. After the ceremony we were invited to check our children out and spend the afternoon with them. Rachel's entire class got checked out except for one boy. And...he was devastated. I almost suggested to Rachel that she stay at school just to hang out with him. I felt so bad. And he's the sweetest kid.

Anyway, it was fun to watch her walk across the stage to receive her certificate of advancement but, boy, was that audience ever raucous! 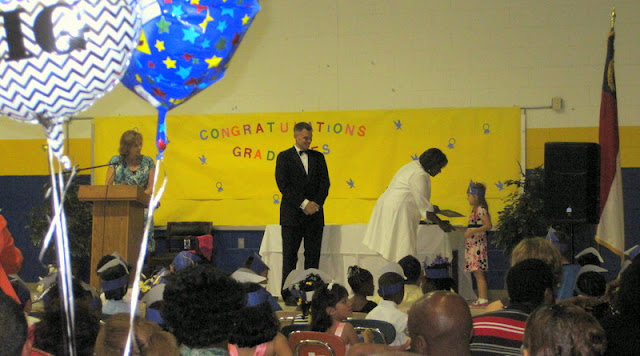 The principal made a big deal about the kindergarteners having finished their first year on a journey and that she hopes they all continue on their journey until they graduate from high school twelve years down the road.

The kids sang a song for their families, which I filmed but which I won't post because most of what I filmed was some girl's rear end. She stood on her chair to get a better view of the children singing and she wasn't the only one. People were whooping and hollering, standing in the aisles, standing on chairs, standing in general. I mean, granted I was standing as well—but I had a fussy baby...and was up against the wall, not just in the middle of anywhere.

Here are the lyrics, though (it's sung to the tune of New York, New York): 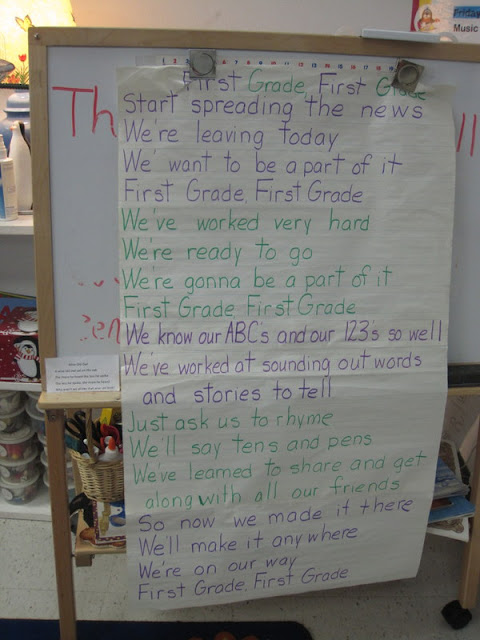 Though the last day of school technically isn't until tomorrow, we took some farewell pictures today since we were there with the camera. 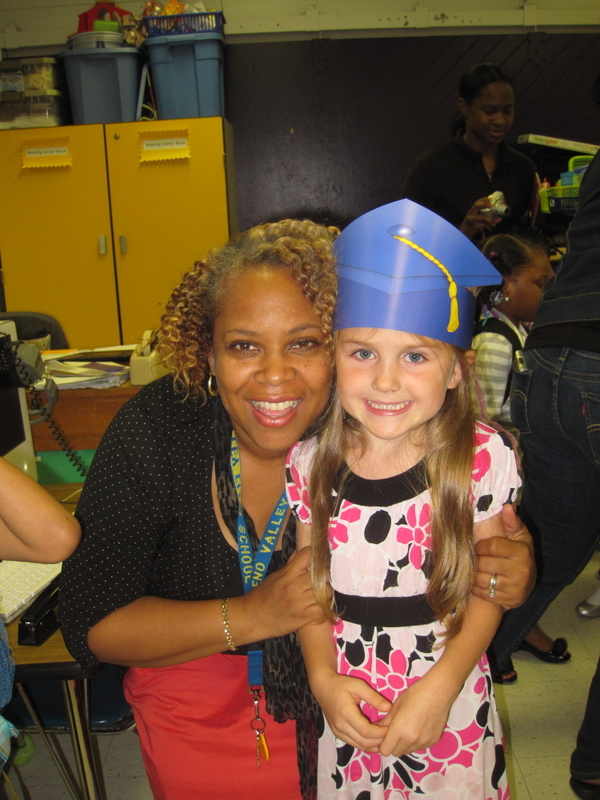 And here she is with her fabulous teacher, Ms. Reeves: 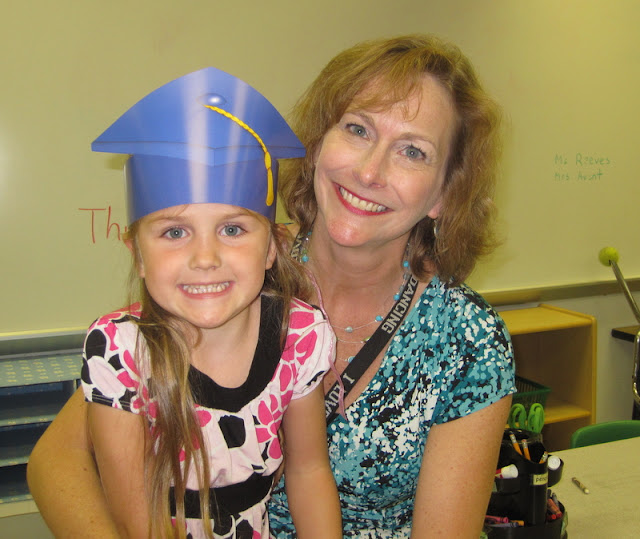 Here's Rachel at her seat: 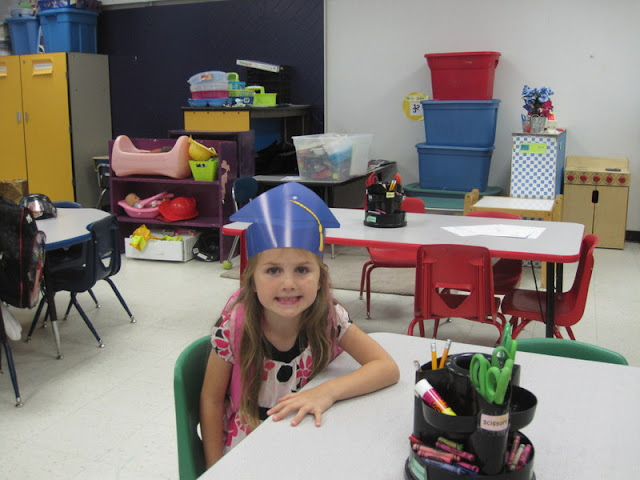 She took Miriam to visit the housekeeping center (which was most recently a rain forest instead of a kitchen (it's taken on many forms through the course of the year)): 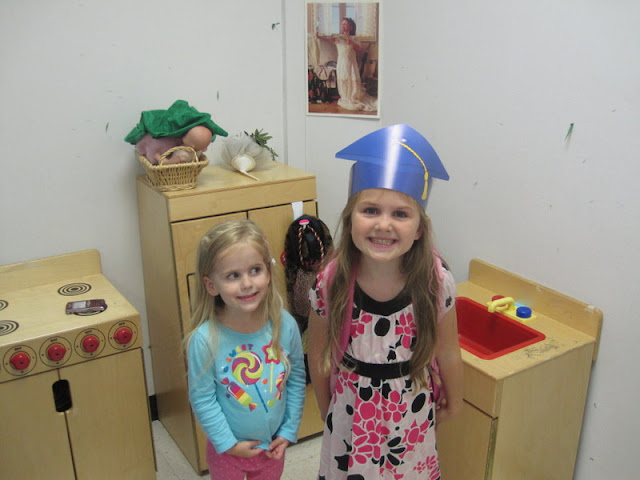 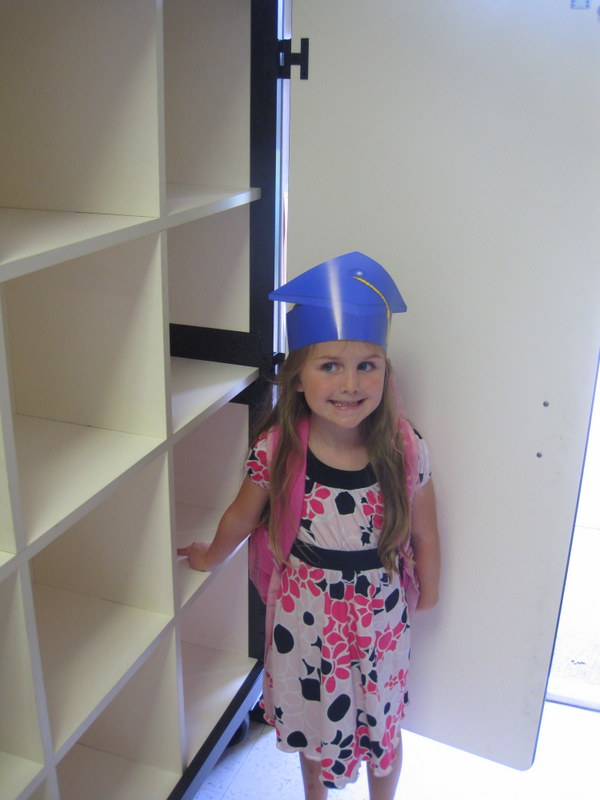 And here she is admiring her "diploma" at home: 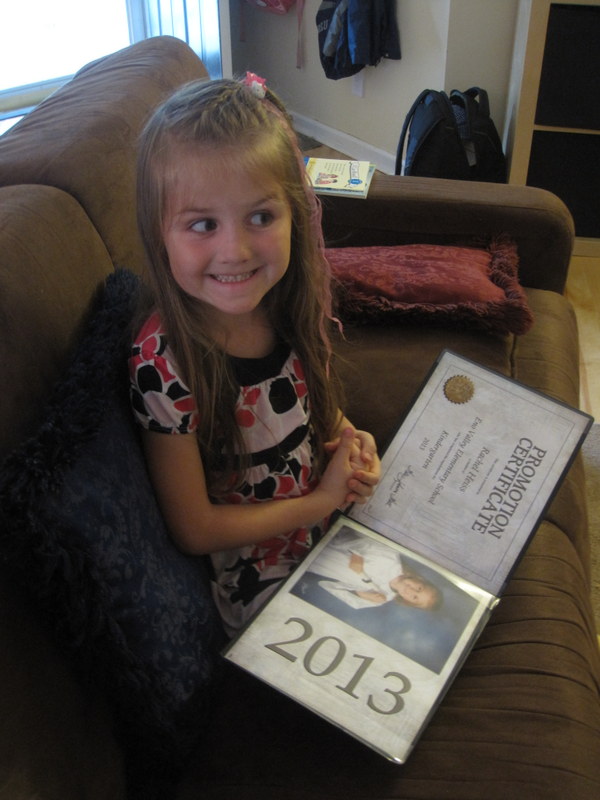 It's hard to believe that just 179 school days ago she was antsy to begin her first day of kindergarten and now tomorrow it's the very last day! That sure went fast for me, though I imagine it seemed like an eternity for her. (Coincidentally, I did her hair the same way on the first day of school as I did for kindergarten graduation...how weird).

Rachel's grown up in so many ways this year! She's reading, writing, and doing math (which is good because that's what we sent her to school to accomplish). She's more aware of how her actions affect other people. She's more independent and self-entertaining. She's growing up beautifully!

It was fun to get to pop into her class to help out occasionally. My favourite day was when Rachel was out of the room (at a Blue Eagle Celebration) and Ms. Reeves was talking to the other children about the importance of choosing the right and one of the boys raised his hand and said, "Like Rachel?"

Yup. Talk about melting my heart right on the spot.

I was the Grade Parent for the year (my most recent venture was driving to Little Caesar's to pick up pizza for their class party on Tuesday) and the kids made this flower pot to thank me: 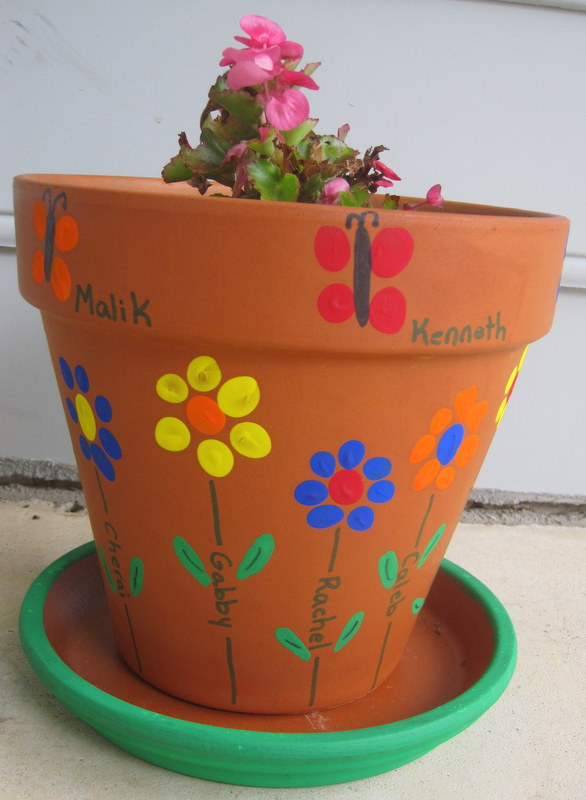 All the flowers and butterflies are made out of their fingerprints. I need to find a glaze for it because I don't think the paints are waterproof (unfortunately). I love it!

I'm getting teary-eyed thinking about the end of kindergarten, not because I'm sad my baby's growing up (which is why she's sad—she cried about it at dinner a couple of nights ago ("I just don't want to grow up! That's why I'm crying!")) but because we have to leave her wonderful teacher. Ms. Reeves was just who we needed to be teaching Rachel this year. She introduced us to a whole community of people through ballet and was just as sweet as could be in every other possible way.
Posted by Nancy at 11:11 PM