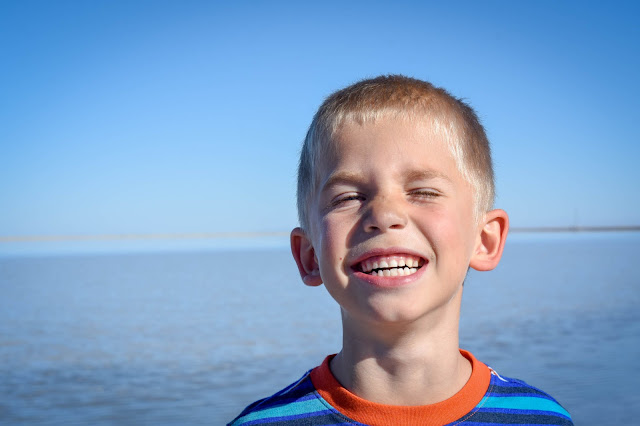 This little man was probably the most frustrating one to take pictures of. By the time we got home his pants, which were woefully caked with mud and salt, had dried and he wasn't even able to bend them. It's a good thing he's a cute, funny kid.

We did quiet a bit of snacking on the way out to the salt flats (a two-hour drive from our house), having left right around lunch time without much lunch in our bellies. When we were very nearly there, Benjamin asked if he could have a packet of applesauce.

"I can eat an applesauce in ten!" Benjamin quickly countered.

"Well, that's not really the poi..." Andrew started to say before Benjamin cut him off with...

"I can eat an applesauce in one!"

He did not get his applesauce, but that was quickly forgotten because...water. My kids cannot resist water. (Oddly enough, last weekend I found a paper about Benjamin wanting to go leaf peeping and then we did; this weekend he brought home a paper about going to the beach and I was like, "Oh, buddy! The beach is too far away!" but then we ended up splashing around in salt water anyway, though we weren't really expecting to find as much water as we did (and that particular rest stop isn't always a lake, either, that lucky little boy)).


Then there is this girl... 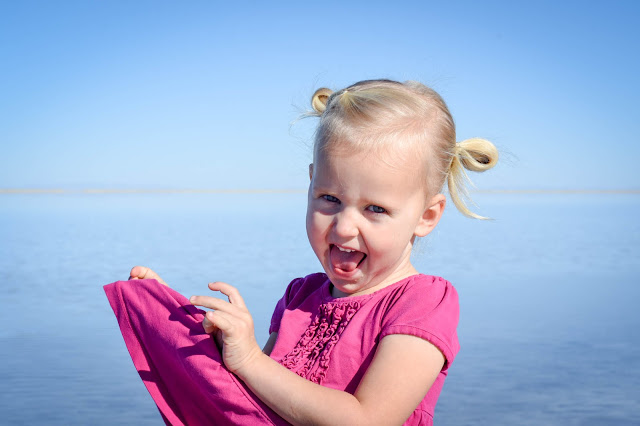 She has been such a screaming banshee lately that I just have no patience for it. Like, zero. None.

You know when you're out in public and a mother starts berating her child the minute they start acting up and you think to yourself, "Yikes. That mother is not very patient..."?

Well, I'm here to tell you that that mother has been being so patient for so long that there is simply no patience left to be had. There is no warning, no counting to three. The warning system died after the child screamed nonstop for three consecutive days. Your nerves are so on edge from (a) the constant screaming and (b) the lack of sleep that you pat yourself on the back for even going out in public in the first place because you're pretty sure your right is twitching nonstop.

And then tragedy strikes: a rock in a shoe? You didn't wait for them and they didn't want to be left behind? You waited for them but they didn't want you to wait because they wanted to run to catch up? You walked too fast when they wanted to be in the lead? There was a bug? They remembered that all the pink cups were dirty when they had lunch yesterday? They remembered a days-old argument they had with their cousin about whether there were "a lot" of storms coming or whether there was just one?

And that's it. You're done for.

They begin to scream and your insides begin to wither and you feel like you would do anything to keep your ears from falling off your head and fleeing the country. There is no counting then. It's all self preservation. It's just, "Stop. Stop screaming right now. Just stop. Stop screaming or so help me!"

My go-to threat right now is that she'll have to lick a bar of soap. She hates it so much that it works even when I don't have any soap around (she's only had to lick it a couple of times). But, like, honestly, it reaches the point where there is nothing wrong and she's just screaming to be mean (no matter what the child psychology books say, I believe that kids can be mean to their parents).

However, Zoë can also be particularly sweet and I have high hopes that she'll grow out of her screaming (because Rachel was a screamer, too, and although her temper still flares at times she's overall a very level-headed creature these days). We loved Rachel through her temper tantrum throwing days and we will love Zoë through hers.

Lately she's been speaking with an accent so rich with diphthongs she could rival Lina Lamonte (only she sounds much sweeter than Lina).

As we were making the very boring drive down I-80 she suddenly sighed heavily.

Earlier in the day she had on a fay-ancy shirt that I had buttoned—or at least tried to button—while she was walking away for me (ain't nobody got time for their mom to button all their buttons (just ask Alexander, whose buttons also take quite a bit of wrangling)). Her buttons ended up being buttoned rather wonkily so when Grandma asked Zoë about it, she ratted me out.

"It's true," I said teasingly. "I buttoned your shirt wrong...because you were running away from me!"

"Mom, can you please fix your attitude?" she chided.

"Sure," I squeaked, trying to hold in my laughter at having one of my oft-used phrases pulled on me. "I can try. But I think my attitude is okay. I mean, I'm not..."

She held up her hand for me to stop talking (she does that a lot).

"Because it's okay to make mistakes," she continued. "But you just need to fix them, okay? So will you button my shirt right now?"

She's hilarious. And frustrating. Often a combination of the two.

This morning while we were getting ready to go (to the passport office!) she was trying to put on her skirt but it was eluding her. She's nothing if not persistent, however, and she eventually got it figured out, declaring, "Oh! That's how it be's!"

Don't forget to read her statements with diphthongs everywhere: Thay-at's how it be-yehs!"

And now for the smallest of the smalls: 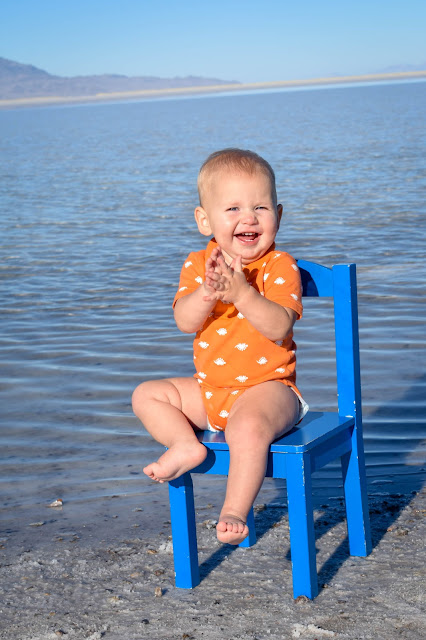 Last night we were being silly before family prayer and Andrew started singing If You're Happy and You Know It but with personalized verses for each child, a roll call of sorts.

He looked around at everyone with a look of shock and then quickly sat back down (gravity—it's a killer).

I don't think he wants us to know that he really could stand/walk on his own because he wants to make us carry him around as long as possible. Good thing we have plenty of carriers around because every day is arm day with Alexander!

He's also recently begun signing "milk" consistently, his first sign (finally—I've been trying for months to get him to sign anything (more, potty, please, thank you...)).
Posted by Nancy at 2:44 AM