I'm feeling pretty good because I just turned in a paper I have been stressing out over for days now (to the point of being unable to sleep and having crummy-tummy). But, not every assignment has been like that. I just am taking this one class that I feel out of my depth for. It's called New Literacies for a reason, I guess. There's a lot of...newness...involved. Some rather intense theoretical stuff. But I'll get through it.
Andrew reminded me this evening that I should probably blog for a bit, not by way of nagging, but by way of reminding me to write for pleasure as well as productivity. He's been great at thinking of ways to take care of me. A few days ago he had the brilliant idea to warm up our little "corn bag" and put it at the foot of the bed on my side. It was blissful. I don't know why we didn't do it before. He's happy. My icy-cold toes are happy. It was pure brilliance.
The girls were a little jealous when I told them about my new foot warmer, so I told them they can make some corn bags as well. We haven't done that yet, but perhaps we'll get around to it this week. (I love the preamble to this "instructables"—"Now, you might say, 'why don't I just use an electric heating pad?'" and to you I say, 'why don't you preemptively burn your house down while you are at it' j/k, it could work but cords and all that are annoying and these are super portable, turn off all by themselves, and definitely won't burn your house down. That is 100% the way my brain works, too. We have a mattress pad, but also I have some pretty special anxiety stuff going on right now and can't sleep while the mattress pad is on (and/or plugged in)).
Anyway, here's a little of what we've been up to this week...
Zoë and Alexander have been reading a lot and have been read to a lot. Here they are enjoying some morning reading time with the library books in the music room. We try to make sure that books in the music room stay in the music room since that's where I keep the bin of library books: 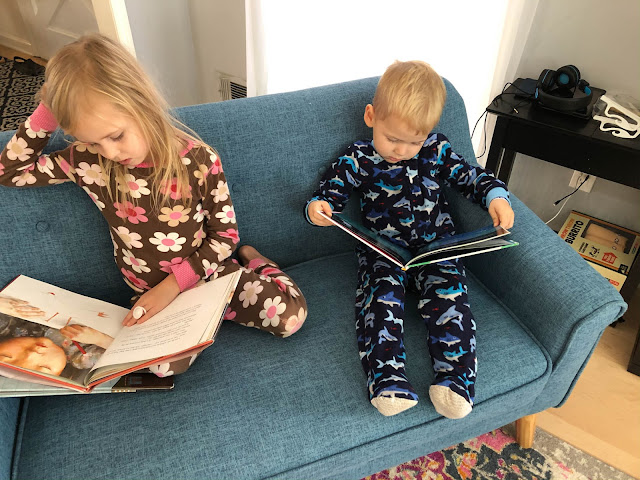 Benjamin has been working on learning needlepoint. He made this cute little mailbox: 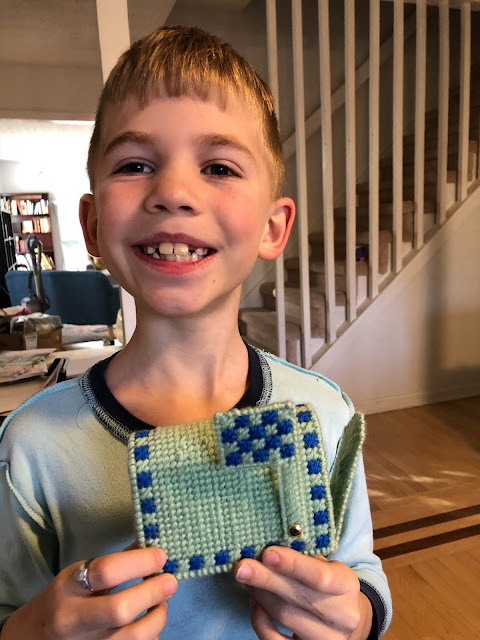 He wants to do more projects but hasn't yet successfully threaded a needle on his own, so I told him that before he embarks on a project of a grander scale, he needs to learn how to thread a needle. We'll see how long I hold out on that principle because he really enjoys it quite a lot and it really doesn't take me long to thread a needle.
He also wants to add a post to his mailbox. He picked out a stick and had me cut it to size and then we found a thicker branch and I was cutting a little "cookie" out of that when the saw did this weird kick-back thing and the blade...got stuck...in the wood. It was terrifying because I hate power tools anyway. And then I was afraid I had broken the saw and my arm hurt from the weird kick-back I got from the wood I was holding (or the handle of the saw? I'm not sure). But, I'm fine now and Andrew helped me free the wood (he used another saw to cut towards the blade of the saw stuck in the wood). So everything's better...but Benjamin's mailbox still doesn't have a post. So maybe'll we'll get around to that next week, too.
Andrew has also been interested in needlework lately and this weekend he bummed some supplies off of the girls (who got some embroidery floss from Bumpa and some Aida fabric from us for Christmas) and set to work completing his first cross stitch pattern—this cute, little porg. Now he's making this "Sampler Sampler" pattern he made himself on Illustrator (it's a pun because that's the formula for Bayesian sampling (or something like that) and he's making a sampler of it). He needed a little bit of help getting started as well (he didn't know to split the embroidery floss, for example, and was trying to work with all six strands at once), but he's practically an expert now!
Miriam and I have been practicing a cell/piano duet of Vivaldi's Spring that she found online. It's a fairly simple arrangement, but I still have trouble with the accompaniment because my piano skills are...still developing. Miriam is very patient with me as I fumble through it. She, on the other hand, can play the piano part beautifully, but if she plays the piano, who would play the cello? I'm even worse on cello than I am on piano.
Alexander likes when Miriam gives him a turn on the cello. She'll let him sit and pluck out a tune on the strings. 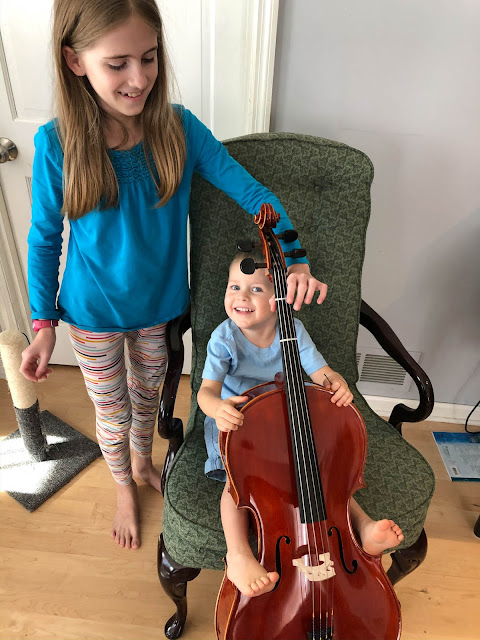 Here's Rachel, my fabulously functional human being. She won the round of Ticket to Ride that we played this evening, beating out Andrew even! 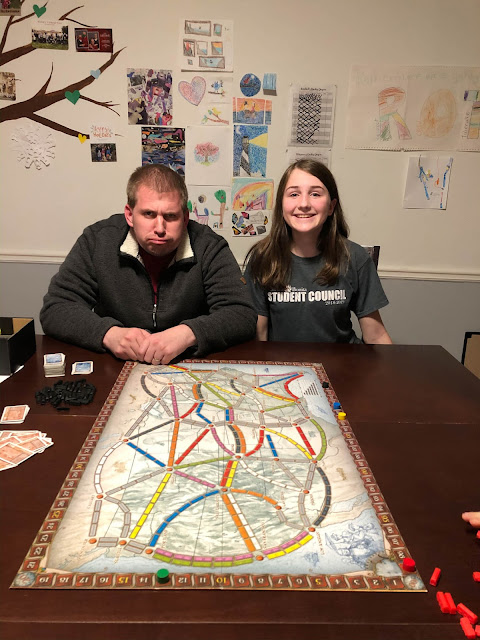 It's great having a teenager in the house! I honestly didn't know if I would love it because I love babies and little kids so much, but having a teenager has been great so far! Rachel has discovered she loves cooking and because she loves cooking she's taken to cleaning the kitchen...like...for fun.
She'll pop on a podcast and just get to work scrubbing down countertops so she can get started on her next baking or cooking adventure. She makes dinner at least once a week (regularly) and has made practically every treat we've had this entire pandemic.
She's helpful with her younger siblings, she's the new president for her Young Women class, she takes responsibility for her learning and makes sure she finishes all her lessons (sometimes signing up for "office hours" with Andrew so she can get some help with math) and helps her siblings with their school work. She's generally cheerful and as much as I miss my little Rachel (do you remember how ridiculously adorable she was?!), I'm happy to have a more grown-up Rachel around.

These are some good kids.
Posted by Nancy at 1:15 AM