Often all five kids do things together like they're the best of friends. But sometimes...sometimes the older girls want to act like older girls. Which makes sense. Because they're...you know...getting older.
So sometimes it's just the three younger kids together doing kid stuff while the teenager-y people are doing do their teenager-y stuff. For example, here are the three little ones riding their bikes around the pond (while Rachel and Miriam, who were actually there with us, walked with me (not that I was sad to have the company)): 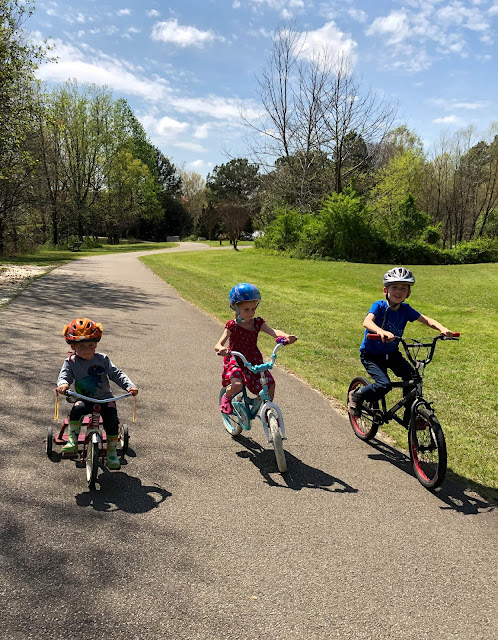 Black-and-white TV...on the island of Alaska

We're on the final stretch. It's the end of the school year (we have 11 school days before we hit our 180 mandated days). It's been a good year, I think. Time will tell. Literally.

I have to do some nationally-normed testing for Miriam and Benjamin this year, so we'll see how they do.

Anyway, we've read a lot of good books and have had a lot of good discussions together. Currently, we're reading The Tale of Despereaux: Being the Story of a Mouse, a Princess, Some Soup, and a Spool of Thread by Kate DiCamillo. My cousin Shannon heartily recommended it. I thought it would be a nice, light read after we'd finished up our Shakespeare unit (which, I believe, ended on a tragedy...but now I can't remember). Anyway, as it turns out, the book is not all that light. It began with a poor little mouse being sentence to death by his own family and community. Miriam was like, "Ah, yes. A nice, light read. Good job, Mom."

So it hasn't always been light, but it is very good (as DiCamillo's books tend to be) and we've had some good discussions while reading it.

One of the questions I asked the kids (on our first day of reading, I believe), was, "So, the mouse community didn't want Despereaux fraternizing with the humans and the king didn't want his daughter fraternizing with a mouse. Can anyone think of any examples from our own human realm where we forbid certain communities from associating with each other?"

Benjamin surprised me by speaking up first.

I'm a bit of a perfectionist. I like to do things right and the idea of not doing something right stresses me out. This, oddly, doesn't necessarily apply to my housekeeping skills. It does however apply to academia. So grad school's been fun so far, obviously.
Along with perfectionism comes a healthy dose of imposter syndrome.
Andrew is getting awfully good at routinely telling me that I can do "this thing," whatever "this thing" is at the time (a paper, a presentation, an entire degree) and know to talk me down when I talk about needing to figure out "my life" (like, the whole thing).
A friend today posted a little meme on facebook that said something about not expecting yourself to perform at your best all the time because then it's no longer your best; it's your norm. So it's fine to sometimes not do your Very Best Work.
I believe this could be a rather dangerous idea in the mind of someone who's already okay not doing their very best work, but I think it's excellent advice for a perfectionist and I've been trying to remind myself that this paper I'm working on, for example, doesn't have to be The Best Paper Ever Written. Like, it honestly just doesn't. And I know that. But if it isn't, then do I really deserve to be in school? (See, that's where the imposter syndrome kicks in).
So I'm going to vainly list a few kind things people have said or done for me this past semester that have helped me feel more real (ie. less of an imposter):
Read more »
Posted by Nancy at 11:49 PM 1 comment:

It's been a long time since I've done a COVID-19 rant, but yesterday I got my first shot (Moderna) and today Andrew got his second shot (also Moderna), and I'm feeling a little like we could all use a good, solid reminder that: we're still (yes, still) in the middle of a global pandemic.

I looked up the flu statistics for this past flu season. Guess how many deaths there were in Georgia. Go on...

Two deaths due to influenza.

Now guess how many COVID deaths there were—in Georgia—in the same time period (September 27 to April 10)...

Honestly, I don't even want to tally them up, but I will to prove a point (the point being that the coronavirus is a little different from influenza). Are you ready?

Eight-thousand eighty-nine deaths due to COVID-19.

I guess these pictures are all the way from March 31. That's how far behind I am with everything. Not that I'm really far behind; I've just been working rather intensely on some other projects.

But, yes, it rained the last day in March and Alexander begged me to play outside with him. I relented because...sometimes I remember that I used to be much more fun as a mom than I am now...and Alexander still deserves to have a fun mom. So he and I played outside in the rain for a while, rescuing worms... 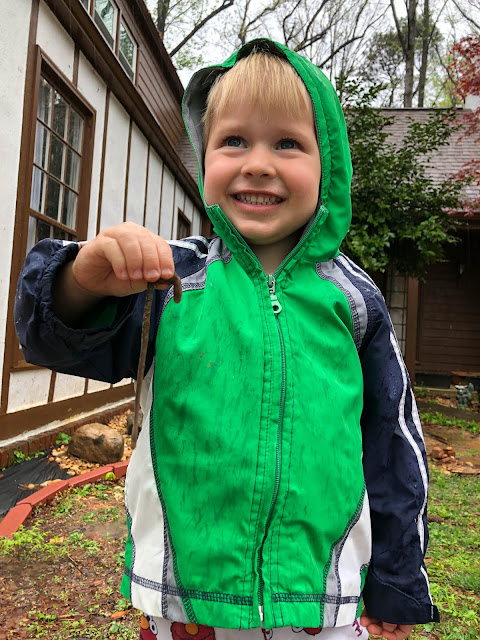 I somehow forgot to include this picture of the kids after the Easter Egg Smackdown: 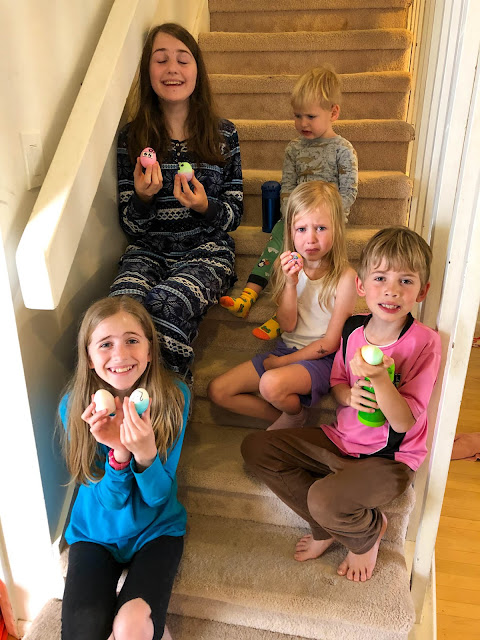 Fitting in all of our Easter traditions over a General Conference weekend felt a little crowded. I'm not even sure why because I don't feel like we have a ton of Easter traditions. We dyed our eggs on Saturday between sessions, which didn't take long at all (thanks to having so many little kids who blew through our egg supply so quickly—plop, plop, plop! and they were done!).
Here's Zoë with her egg that she ended up naming Bicker with Sticker: 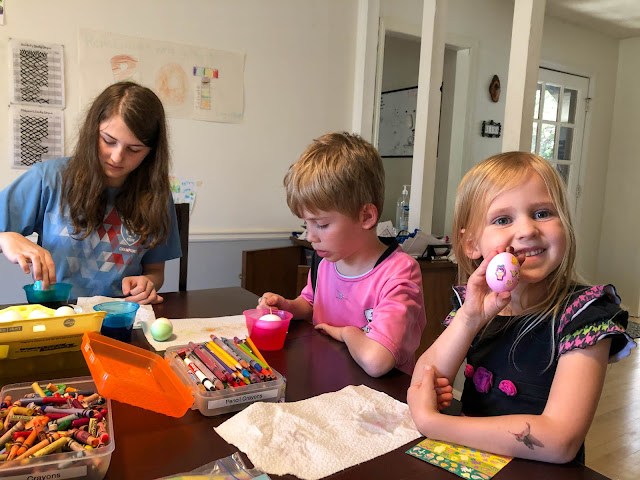 A friend of mine dropped off some things off the other day that she thought the kids might be able to use: some swim suits her girls never got around to wearing (tags still on them and everything), a bunch of fancy hair things, a real (fake) tiara (which Zoë has been wearing pretty much nonstop), and a little container of iridescent purple lip gloss (which Zoë has been applying as often as possible).

Last night before she brushed her teeth she stood on the bathroom stool, admiring her lightly purpled lips in the mirror.

"This isn't like chapstick, you know," she said. "It's like lipstick! See? My lips are kind of purplish."

Evidently she's only ever used clear lip treatments before, which is fine. Because she's five.

"But," she continued, with a saucy eyebrow waggle, "It's transgression lipstick!"

"You can still see my real lips through it!" Zoë explained. "Transgression!"

"You mean translucent," Benjamin corrected her, with toothpaste foam flying out of his mouth and landing all over creation. "Or transparent."

This story's a keeper. I'll probably tell it at her wedding.