Extra! Extra! Read all about it!

This was a monumental occasion and deserved a blog post all its own.

We had dinner at my parents' house this evening and my mother noticed that I was wasting away--quite literally. Together Rachel and I weigh 118 lbs. I won't divide the weight out for you. It would be too embarrassing.

So although Rachel was desperate to nurse (it had been four hours), my mom insisted that I eat before I fed Rachel. I got some yummy tacos ready for myself and my mom got some baby cereal ready for Rachel.

And she's happy to see you! 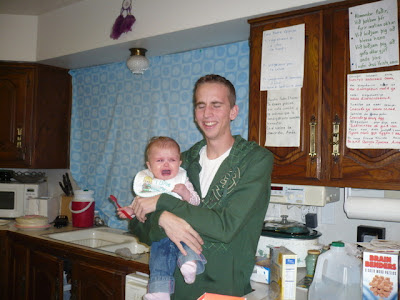 Mom grabbed the baby and headed straight for him while he backed himself into a corner. Then she just plopped Rachel right into his arms, facing him.

Rachel's always been fond of Uncle Patrick, even though he refused to hold her for the first six months of her life and didn't even touch her until she was a few weeks old. Her first reaction was to grab at his face and try to snuggle his neck--but he flinched and moved away from her. This set her screaming.

"Hold her out," said Andrew.

So Patrick extended his arms in front of him, holding Rachel like she was a poisonous snake.

"Not like that! Just turn her to face out!"

And there you have it. Patrick held Rachel. Neither one of them was very happy and it didn't last very long, but it happened.

I know that Patrick loves Rachel, even if he won't hold her and refers to her as "It" because he'll keep her entertained when we change her diaper and will get down on the floor and throw toys to her. He'll even grab her little fingers once in a while.

He's just a little afraid of babies. At first it was because he was afraid to break her...but she's six months old. You have to admit she's pretty durable at this point. It was about time he held her and I think he was even a little bit proud of it because when Garrion came over and I said,

"Guess what Patrick did today?"

Patrick interjected, "I held It," before I could even tell Garrion what he did.

Garrion was flabbergasted, as we all were.
Posted by Nancy at 1:20 AM