Way back in November (on the 25th) Rachel gave a talk in primary. She was asked last minute but eagerly accepted the task, running off to get a pencil and some paper the minute I told her about it. Her topic was "I can prepare now to serve a fulltime mission" and she knew exactly what she wanted to say.

And here's what she wrote: 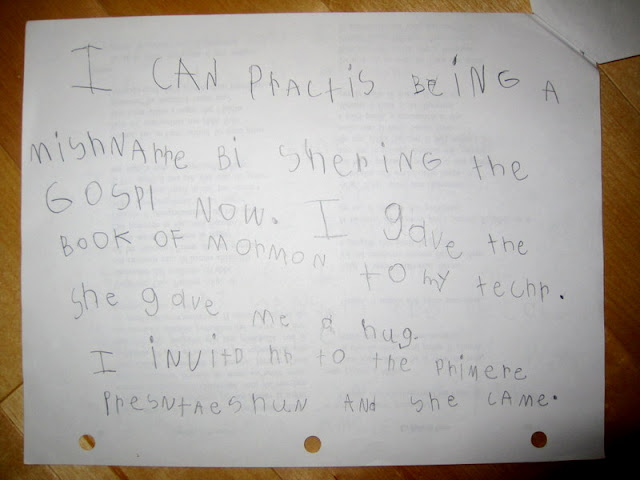 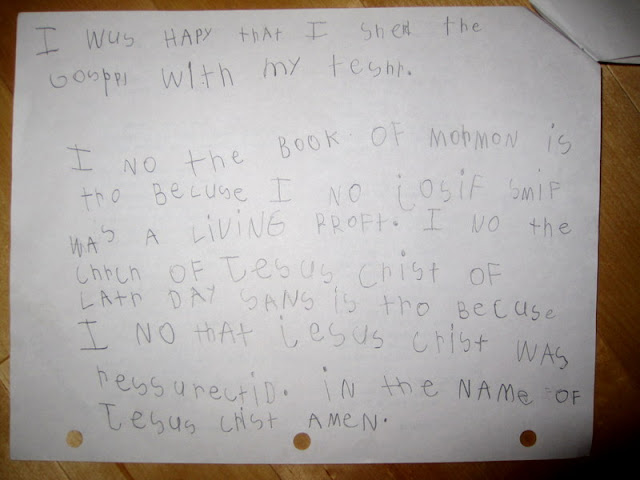 (Page 1:) I can practice being a missionary by sharing the gospel. I gave the Book of Mormon to my teacher. She gave me a hug. I invited her to the Primary Presentation and she came. (Page 2:) I was happy that I shared the gospel with my teacher. I know the Book of Mormon is true because I know Joseph Smith was a living prophet. I know the Church of Jesus Christ of Latter-day Saints is true because I know that Jesus Christ was resurrected. In the name of Jesus Christ, Amen.

When it came time to give her talk she went up to the podium all by herself but got stage fright before she started talking. I went up and stood beside her and she was able to get through it. I was proud of her for writing it by herself. Miriam, who was still a lowly nursery baby when Rachel wrote her talk, wanted to emulate her older, wiser primary-going sister. She wrote her own talk, complete with a cover page, and insisted that we staple it for her and then listen to her practice it over and over and over again (saying something a little different every time). 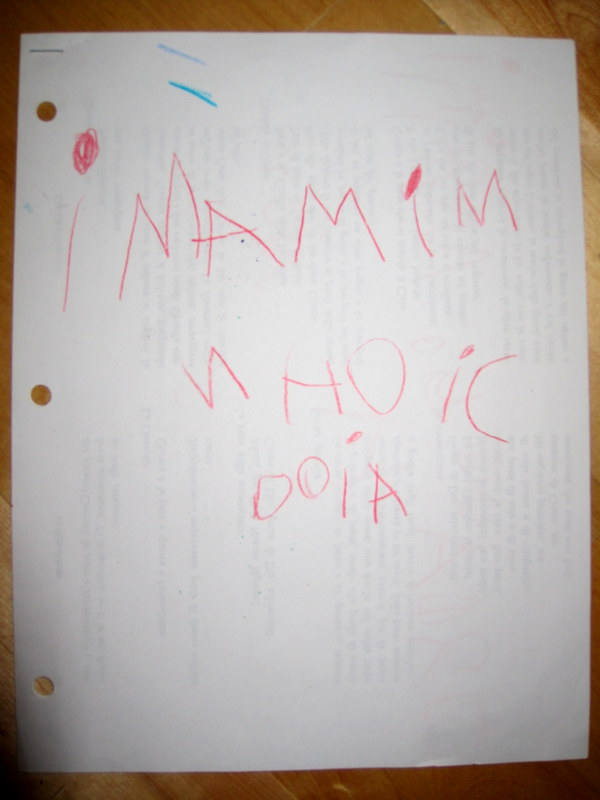 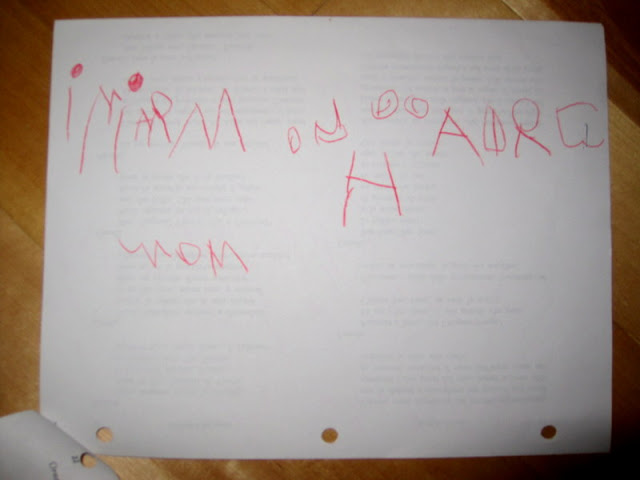 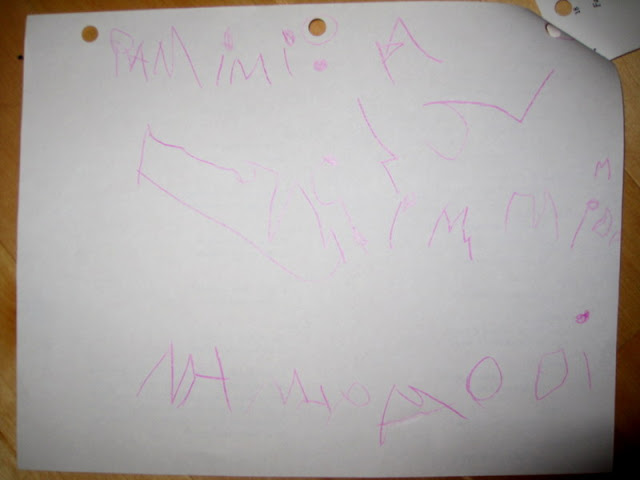 As the primary secretary, I'm in charge of assigning talks and things now (speaking of which, I kind of need to do that...like soon) and I assigned Miriam as the first Sunbeam to give a talk this year (since I knew she would do it—though the primary president's little Sunbeam has already asked me when it's going to be his turn so I know he'll do it, too). I put off assigning any Sunbeams until this week—the last week in January—so that they could get used to coming to primary first.

The girls were so helpfully setting the table and they decided that they both wanted to sit beside Daddy—so they put him in the middle of the bench where he'd be flanked with children. He wasn't happy about this arrangement and asked that he sit by one of them so that he could sit on the end of the bench (better for hoping up to get things) and the other one could sit by Mommy.

That would never do—they both wanted to sit beside Daddy.

They fought, they whined, they cried, they played tug-of-war over plates and cups.

Finally I said, "Fine. No one gets to sit beside Daddy. Daddy will sit by himself on one bench and the two of you will sit beside each other on the other bench."

Where do I sit? On a chair (with a back) at the head of the table so that I can do things like nurse the baby during dinner and/or balance him on my lap while I feed him applesauce or whatever (because we've never had a high chair).

Miriam hung her head and moved her plate to the other side of the table and sat there quietly, waiting for dinner. She was upset for a minute or two and pouted royally but didn't make a fuss and within minutes decided that she could sit across the table from Daddy and be happy about it.

Rachel flew off the handle. She grabbed her plate and stormed off to her bedroom screaming about how unfair life was and how unreasonable we were as parents. She yelled, she kicked, she threw things, she said mean things she would later regret. I went in and talked to her and she seemed to think that the biggest injustice was that she was miserable while Miriam was happy—and that we, as parents, never let her make any decisions.

"You're the one making this choice," I pointed out to her. "You always have the choice of how to react to situations. Our punishment didn't favour either of you. You were both fighting over who got to sit by Daddy. The punishment was that neither of you get to and that instead you have to sit by each other. Miriam wasn't happy about it at first but has decided that she'd rather eat dinner and chat happily with the family so she changed her attitude. You are choosing to make this a big deal. You can also choose to come eat happily with us, or you can choose to come eat unhappily—but calmly—with us, or you can choose to sit in your room and continue to throw a temper tantrum."

She chose to come out of her room miserably but calmly and sat down to dinner with us. Her attitude improved bit by bit until she was her charming self again.

And then we started talking about Miriam's talk topic: I have agency and I am responsible for my choices.

Rachel blushed. "Don't say anything about tonight," she pleaded. "I didn't make good choices and I don't want the whole primary to know that!"

She didn't have to worry. Miriam kept her talk to the most generic of terms. But we had an excellent discussion about choice and accountability, which are two terms that go hand in hand in my mind (I wonder why).

Anyway, here's Miriam's talk, which she said loud and clear into the microphone (and only once said the second half of the sentence when I prompted her without first repeating the prompt):

Jesus came to earth to show us how to return to Heavenly Father. He is a good example of how to make good choices. When I follow Jesus' example, it makes me and those around me happy.

In the name of Jesus Christ, Amen.


Our sharing time today was just darling—our primary president is so sweet. She began her lesson by asking the kids what agency was—the gift of choosing, basically. "Because I've been given the gift of agency I'm going to choose to give the rest of my lesson while standing on a chair!" she said, and climbed up on a chair. "This is so cool!" she said. "I can see all of you from here! Standing on a chair is kind of fun. Anyway, back to the lesson. Oh, I need some tape to put this sign on the board!"

She leaned over to the table to grab her tape, coming perilously close to falling. Then she made some rolls of tape while continuing to talk about agency. "I'll hang this sign up on the board now so that you can read it," she said and stepped right off her chair and made a tremendous show of falling down and you should have seen the children's reaction!

They gasped with wide eyes—some of them even rushed forward to help her back up—and immediately understood that a consequence was attached to her choice. Standing on chairs, though perhaps fun, is dangerous—you could fall! She could have prevented her fall by standing on the floor to give her lesson. Even the Sunbeams were able to point that out to her after the fact, while the older classes (Rachel's class included) advised her to get off the chair before she fell.

It was an excellent demonstration of choice and accountability (or "being responsible for your choices," which is the wording we used with the primary children). She had them say several times, "I have agency," and "I am responsible for my choices," until they had those down pat—those were the signs she was trying to tape to the board when she fell.

She then had a "Basket of Choices" and pulled up two separate lines of children. One child pulled a scenario out of the basket and read it (if they could; if not they handed it to her so she could read it) and then everyone voted on whether it was a good choice or bad choice by giving a thumbs up or a thumbs down. A child from the other line would then be asked to give a consequence of the choice.

Wearing a coat outside when it's cold. Good choice. You'll be warm/won't get sick.

Hitting your brother. Bad choice. He'll be sad/you'll get in trouble.

The kids loved it. And it was an excellent reminder for me as well. Sometimes taking responsibility for my choices is one of my least favourite parts about agency (though I think it's one of the most important parts).
Posted by Nancy at 11:50 PM