Will work for ice cream

I've been looking for a new way to motivate my dear children to pull their own weight around here. We had a way that worked...for a month a half...until the holidays kicked in and then we gave up trying for a while because there was too much going on. Last night I jumped on pinterest—something I haven't done in ages—and found some cute ideas for chore charts.

I took the ice cream idea from here (but I just made my own instead of printing it) and the chore cards from here. I put it together when the kids were in bed and showed it to Miriam first thing in the morning. One of her chores for today was "get dressed" and for the first time in a long time we didn't have to argue about it (she lived in her pyjamas when everyone was sick and apparently that wasn't a habit she wanted to break). After she got dressed she ran and grabbed the broom so that she could do another chore. She finished 5 out of her 6 chores before lunch! 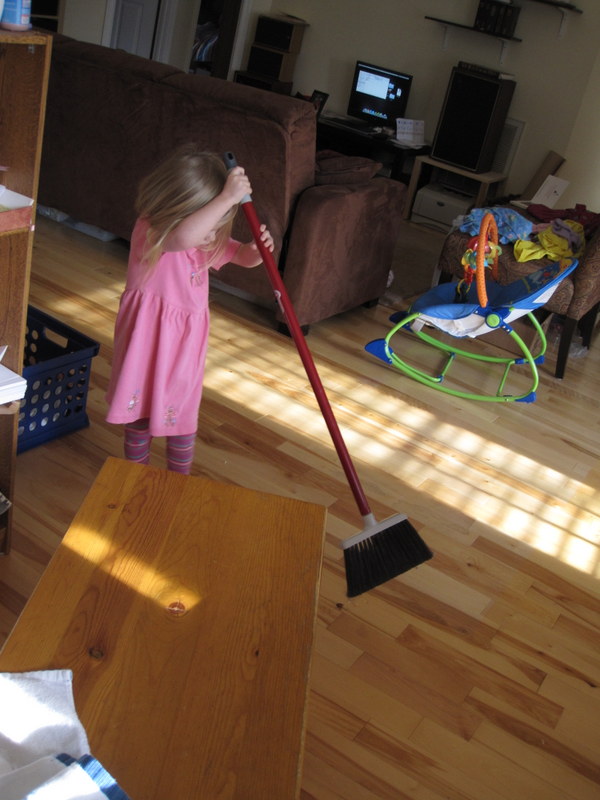 The only one she had left to do was setting the table, which I told her only counted for dinner (not breakfast or lunch). 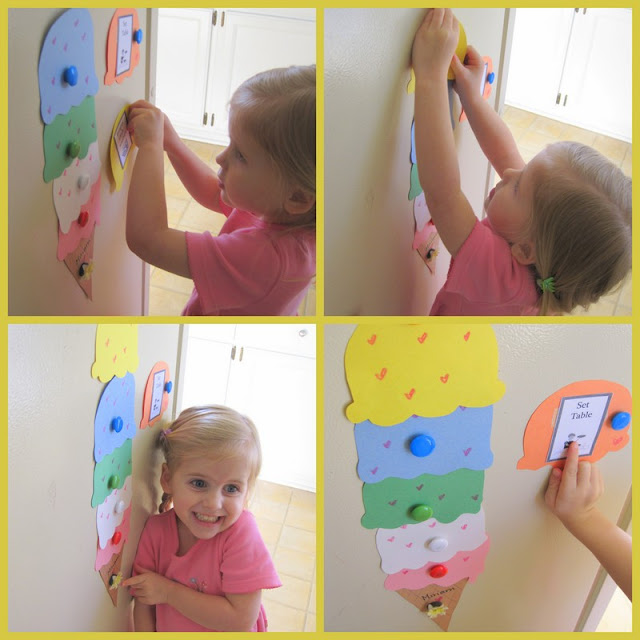 After dinner was over she got out the ice cream scoop and took it to Andrew (who was already at his desk doing homeworky stuff) and said, "Okay, I'm ready Daddy!" while flourishing the scoop in the air. She was pretty sure that at this point ice cream was a given. She was wrong.

Again we explained that the ice cream chore chart was more of a game than a promise of a physical treat.

She was a little disappointed but she got over it when I told her she'd get to re-do her ice cream cone the next day.

Rachel, who minimally understands delayed gratification, suggested that after they both fill up their ice cream cones an as-of-yet undetermined number of times that we have an ice cream party (building banana splits or making milkshakes or going to Wendy's for a frosty were all ideas that were thrown around during our impromptu brainstorming session). Truthfully, we're okay with promising that we'll occasionally reward our hardworking girls with an ice cream dessert (because it means we get rewarded with an ice cream dessert, too, right?).

For now it's made chore time a little more fun—they each have six "random" jobs and can choose to do them in whatever order they'd like (except in cases where they'd throw off the rhythm of our home (eg. you can't choose to set the table for dinner while it's being used for homework)). Miriam chose her pink chore first today and Rachel was excited to take out the recycling in the dark. The kitchen was completely clean (okay, so "completely" is probably going too far (just know that whenever I say "completely clean" in reference to my house it's probably an exaggeration)) before story time and the couch was actually clutter-free enough to sit on (because one of Rachel's jobs was to clean the living room).

It was kind of nice to not have to nag them about getting things done because they knew exactly what I expected them to do today. And I already have tomorrow's expectations ready for them in the morning (or after school (because Rachel's not a morning person so we don't even mention chores before school)). Here's hoping this system will last us for a few months at least...and when it stops working (which it inevitably will) I'll try something new.
Posted by Nancy at 11:49 PM