Biking and Playing and Sleeping

Today after the girls were finished with their ballet marathon we went to the park—a new one!—so that Rachel could practice riding her bike (a new one!) because we finally have one for her!

The poor girl has been asking for a bike for such a long time and has been such a good sport about going out to ride bikes with the neighbours while squishing herself onto a tiny baby bike. I've been hunting through Craigslist ads for months, trying to scrounge up a bicycle for Rachel and yesterday the stars finally aligned and I found a gently-used, much-loved, decently-priced bike for her. Andrew picked it up in the afternoon (along with some "curbside alerts" for a baby basketball hoop and a push toy) and brought it home. Rachel was thrilled to pieces and even though it's freezing cold here (barely freezing but freezing nonetheless) she begged and begged Andrew to take her out bike riding.

Him—and not me—because when I said, "I wonder where we can pick up a set of training wheels," he said, "I learned to ride without training wheels, she can, too," and then I said, "I guess you're in charge of teaching the kids to ride bikes then. Also, you can teach them how to drive because I'm not doing that!" And then he said, "Well, you're still learning how to drive yourself..."

And it was about at that point that Rachel started begging to go out and ride her bike, but it wasn't until this afternoon that Andrew relented and loaded her bike (and Miriam's bike) into the van and took us all to a nearby playground.

We parked the van and walked all the way across the soccer field to the playground where I noticed that there were no baby swings.

"There are no baby swings!" I remarked. "I was totally banking on them having baby swings. The stroller doesn't happen to be in the back of the van, does it? 'Cuz I need somewhere to Benjamin down that doesn't involve mud or wood chips."

"It is in the back of the van," Andrew said, tossing me the keys.

Benjamin and I walked all the way back to the van (it was a very easy trip for Benjamin) and got the stroller. By the time we'd made our way to the blacktop Miriam was just finishing riding. 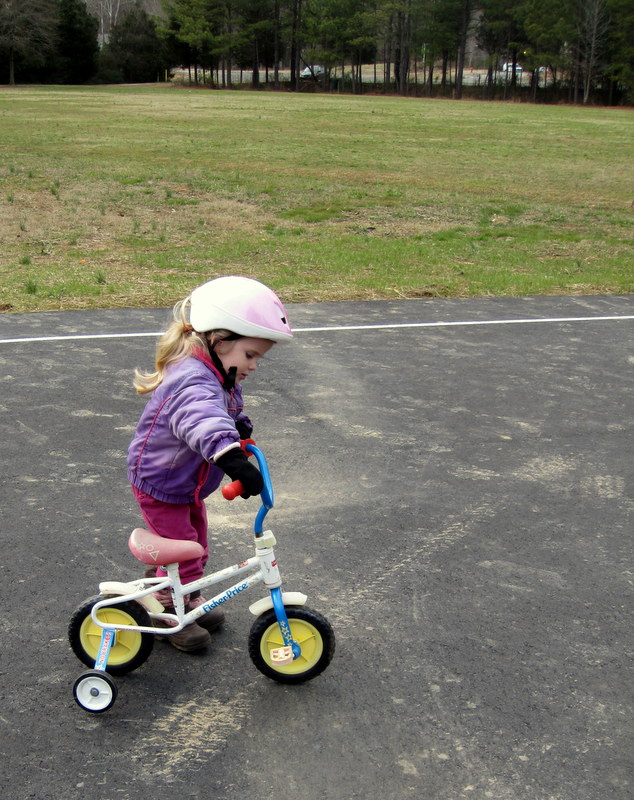 I tried to convince her to hop back on the bike and ride around for a few more minutes but she didn't want to. She also didn't want to take off her helment. But she did want to play at the playground. All the pictures of her at the playground make us look like overly cautious parents when actually it was more of a pick-your-battles thing. I think part of the reason she wanted to keep it on is because she just inherited Rachel's old helmet (because the people we bought the bike from decided to throw in their daughter's old helmet). Miriam's old helmet is red (which will be great for Benjamin) and she thinks pink is a much better colour so was very excited when we said she could have Rachel's old helment. 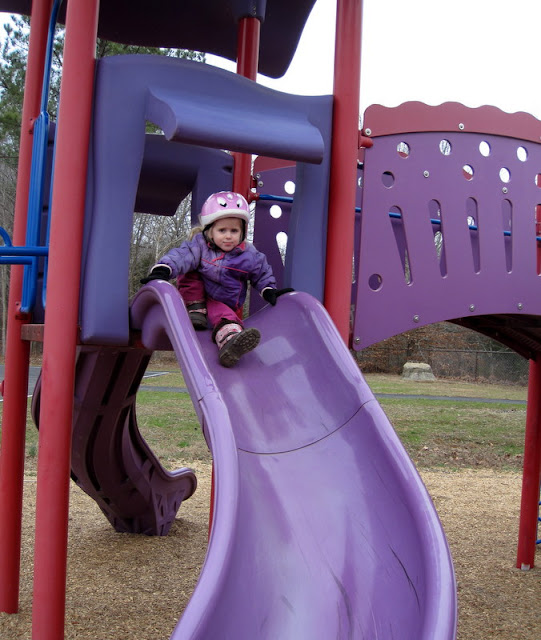 (It also kind of looks like we colour-coordinated Miriam with the playground equipment. I assure you we didn't.)

While I played around with Benjamin and Miriam (going on walks by the river, going down slides, swinging on swings) Rachel and Andrew got down to the nitty-gritty of bicycle riding. Rachel made great progress today, though she isn't quite riding solo yet. She tries to bail off the bike whenever she notices that Andrew isn't holding on (which made for several interesting falls and semi-falls).

Ready for a lot of pictures of Rachel riding her bike? Here they are: 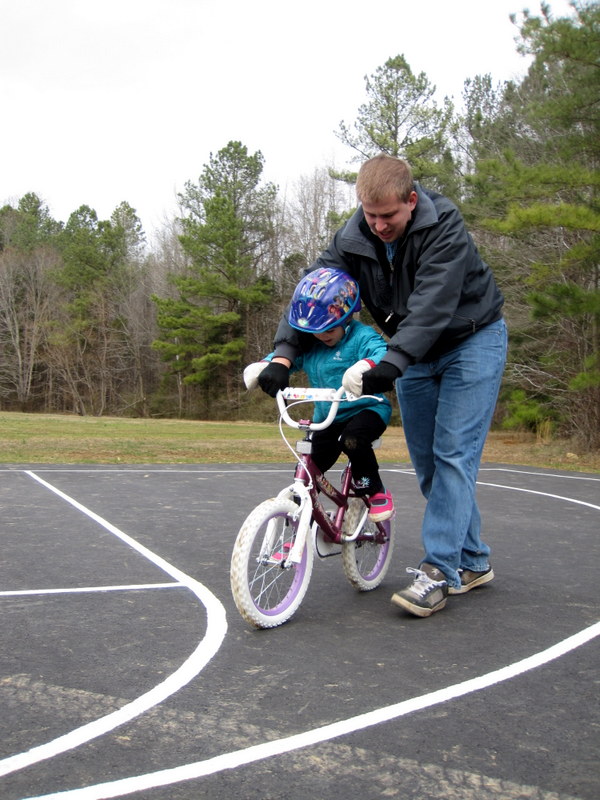 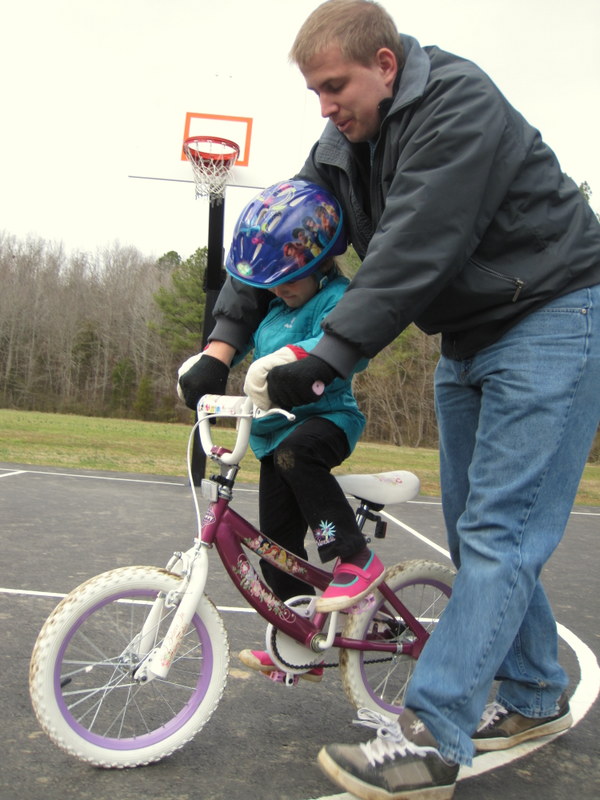 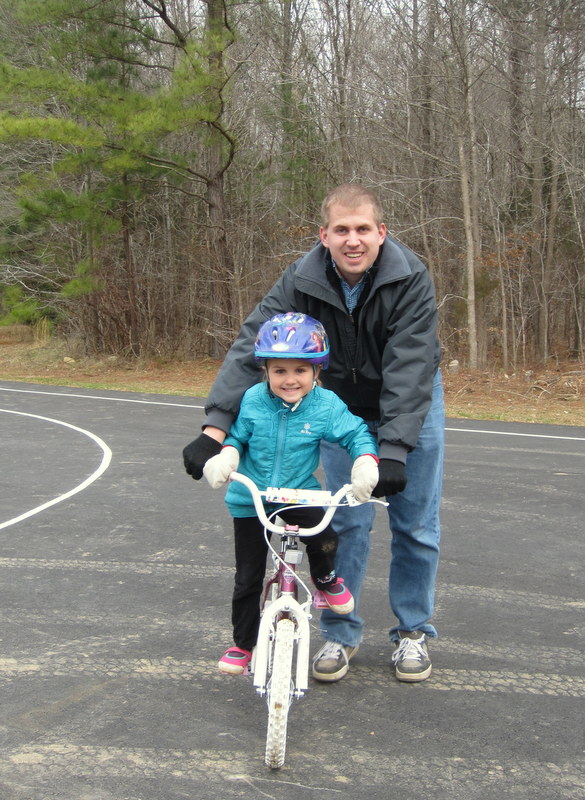 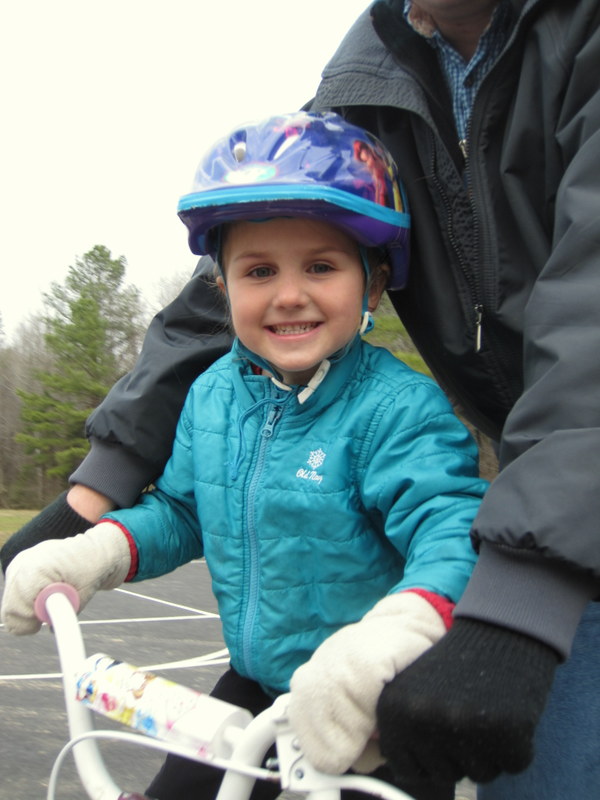 Here's Rachel about to take another tumble... 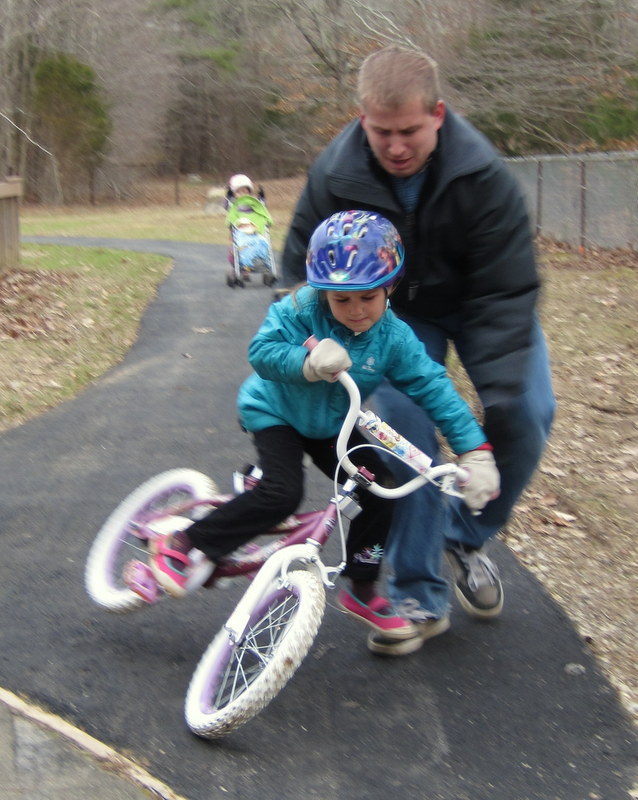 But Andrew made a quick save and uprighted her before she hit the pavement: 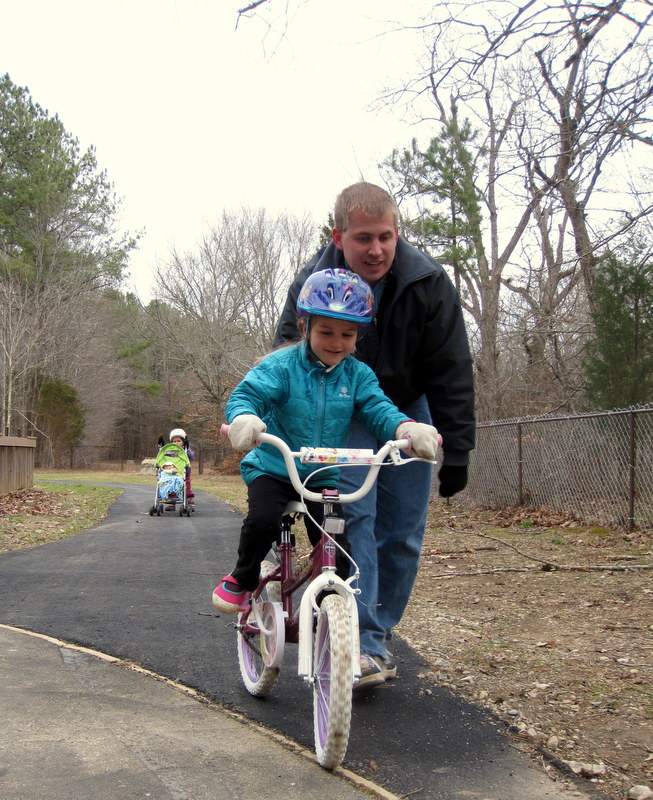 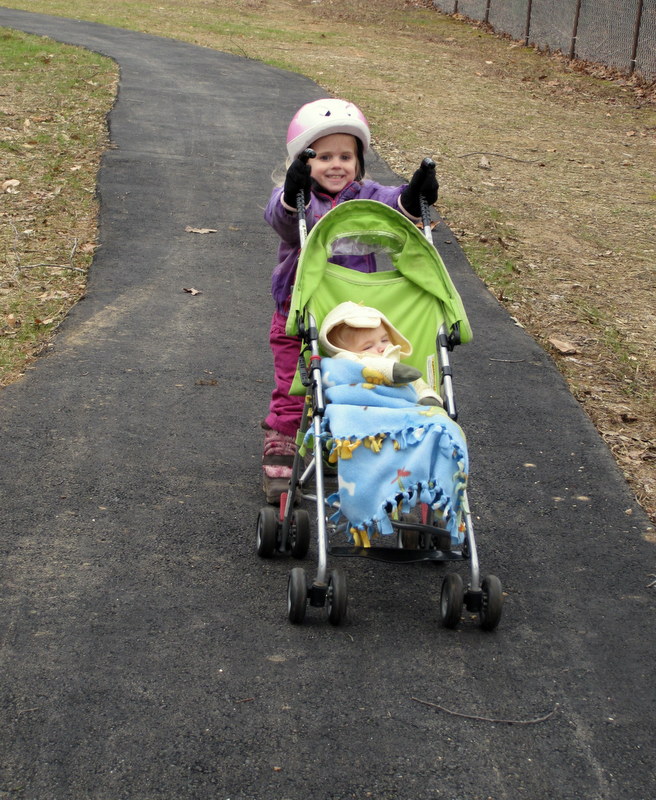 She pushed him so well that she lulled him to sleep: 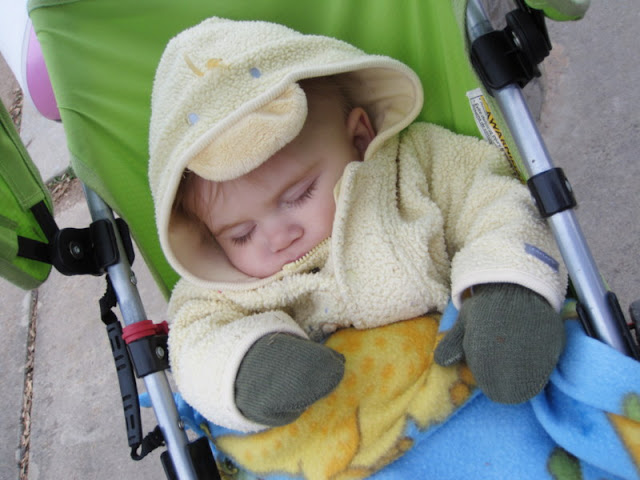 She was so proud when I told her that she'd put him to sleep that she had to check on him, just to be sure I wasn't kidding: 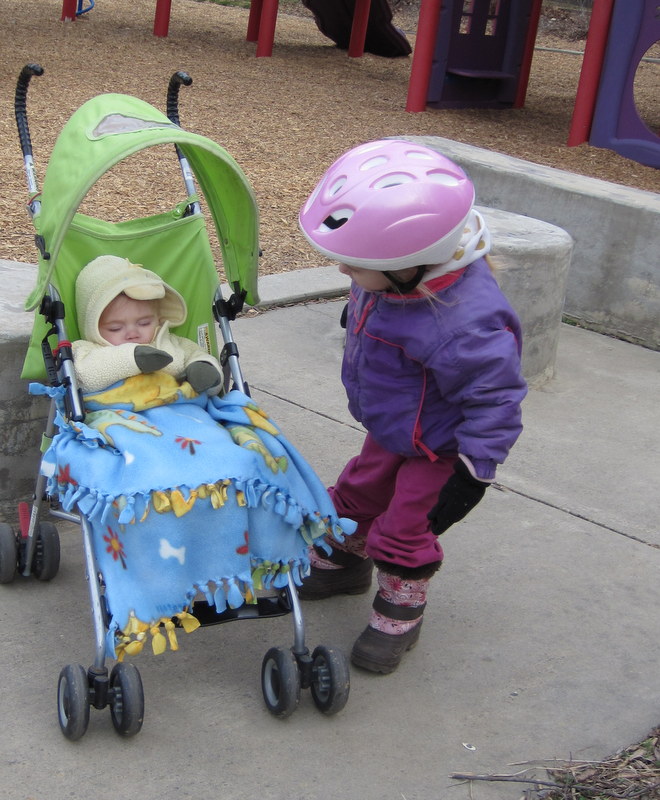 Before he fell asleep, though, we had some fun playing on the playground equipment together. 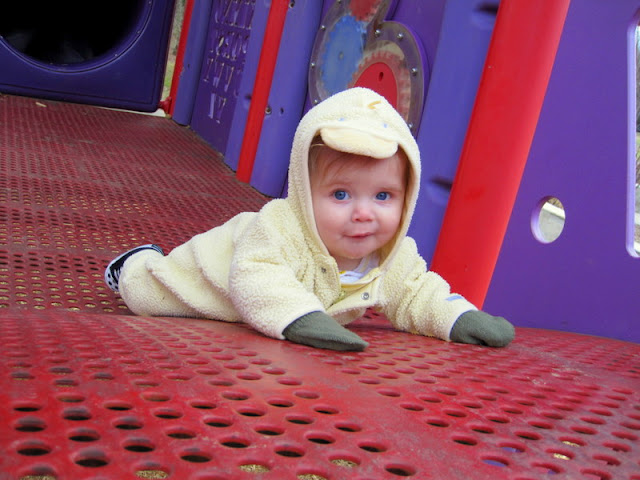 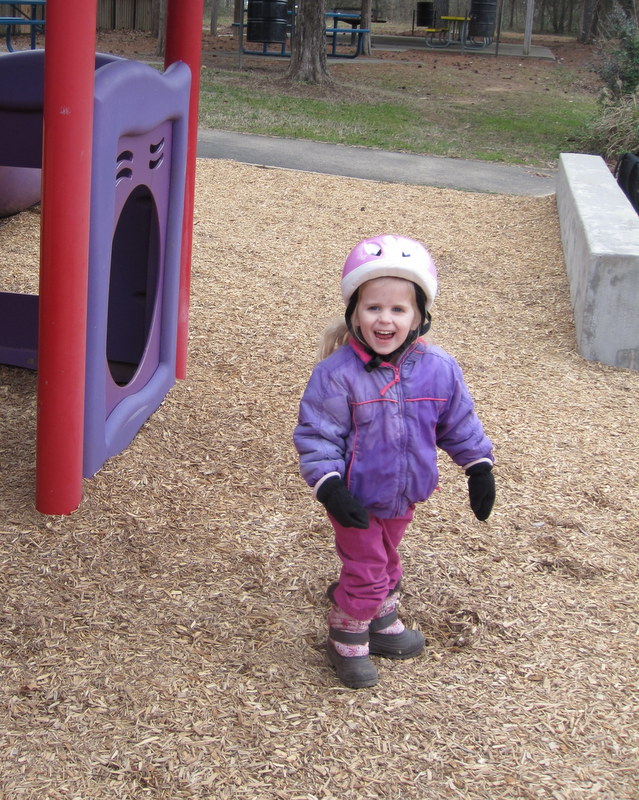 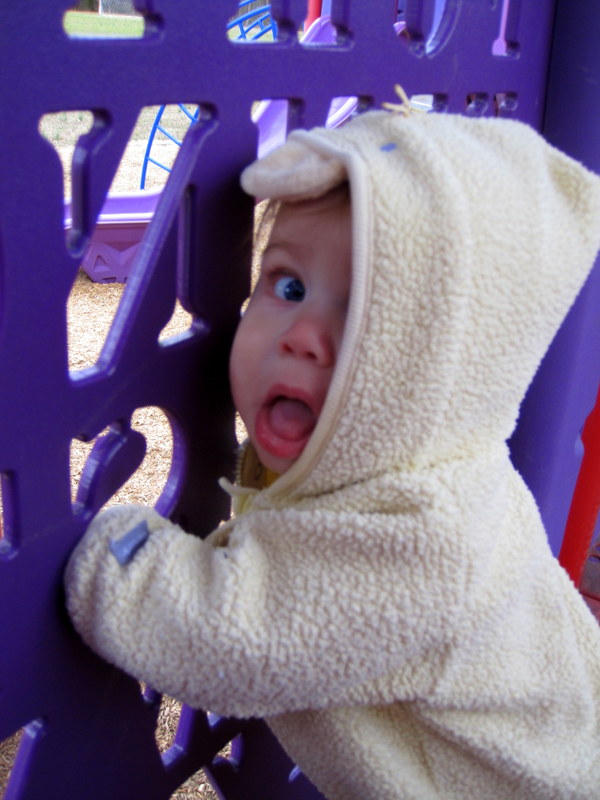 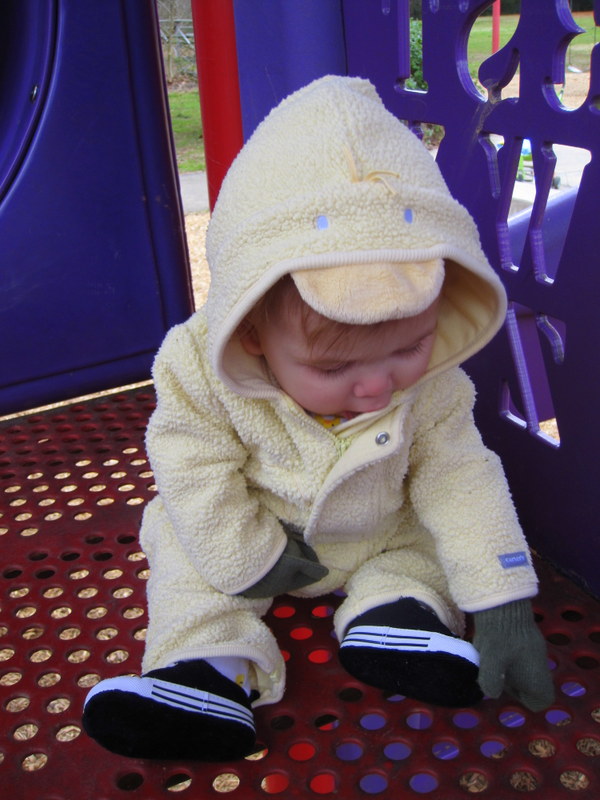 His little shoes are so sweet! Vasanti gave them to us—her husband was an Olympic soccer coach for Tanzania and helped "bring" soccer to Utah (if I'm remembering that all correctly). Her little family means a lot to our family. These shoes were the perfect gift from her because I can't look at them without thinking about her and the amazing life she's led. They're still too big for Benjamin but he had footy-jammies on underneath them so they stayed on alright. 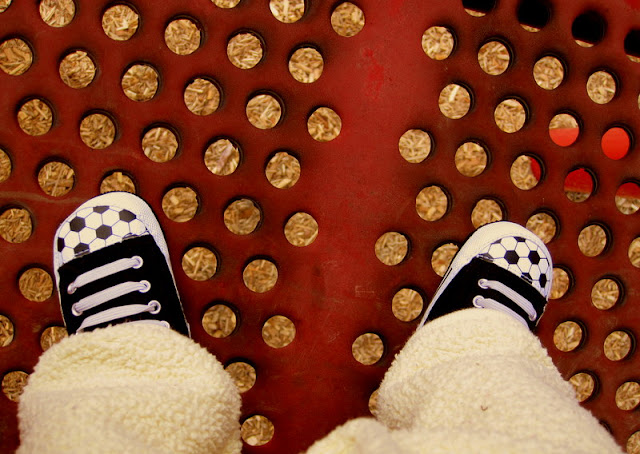 I put him on the bridge on his tummy and he slowly slid down to the bottom of it. He wasn't quite sure what to think when he first started sliding but seemed to think it was pretty funny by the end—and that tongue of his is always sticking out now that he's officially teething. 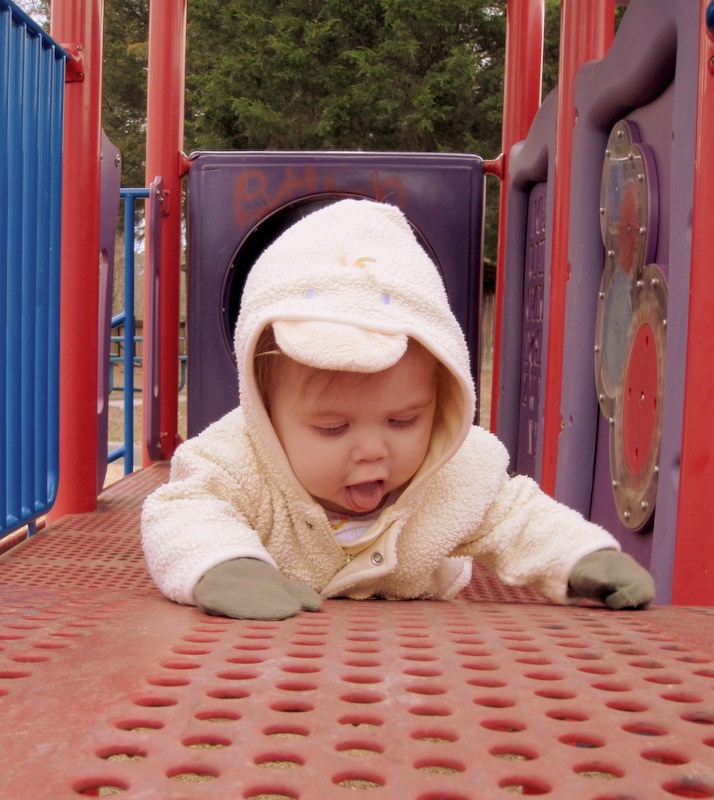 I'm not even going to try to tell you how adorable I think this little guy is. 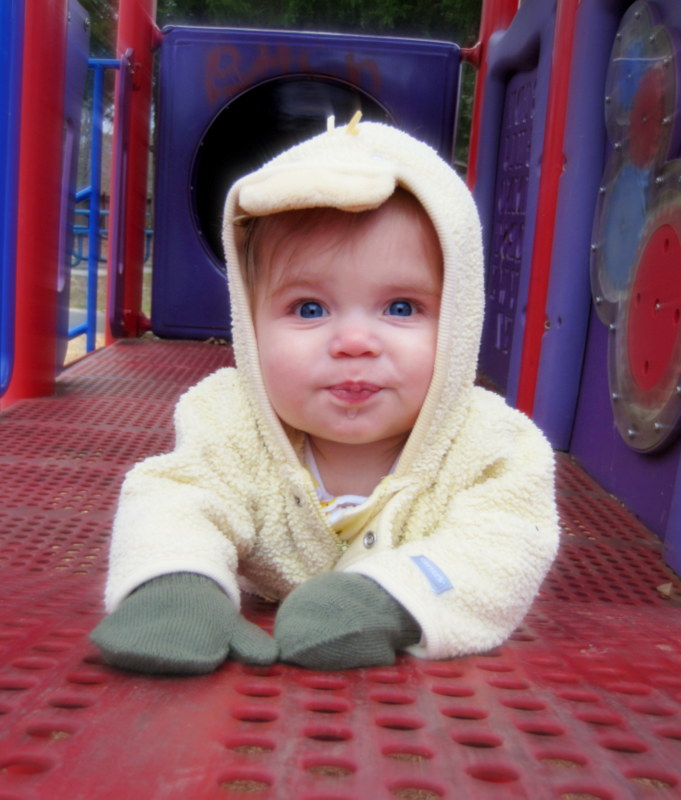 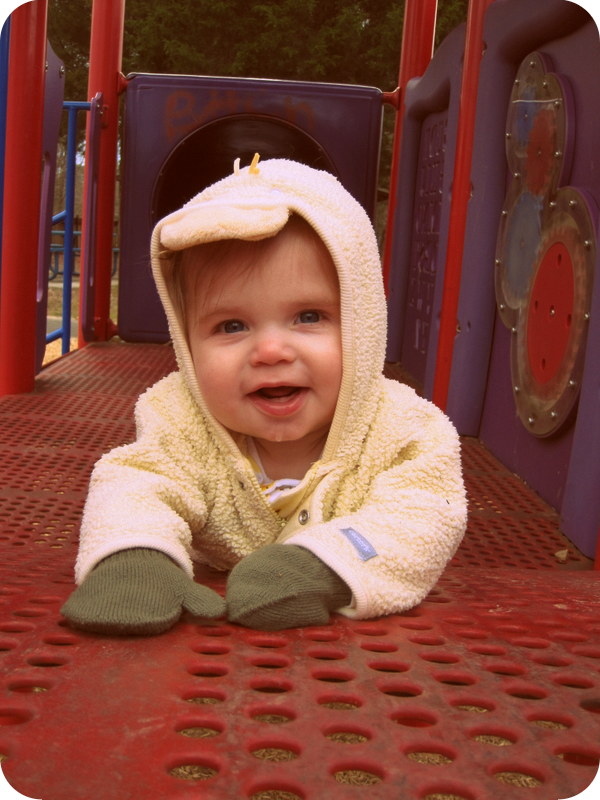 Here are a few pictures from our walk... 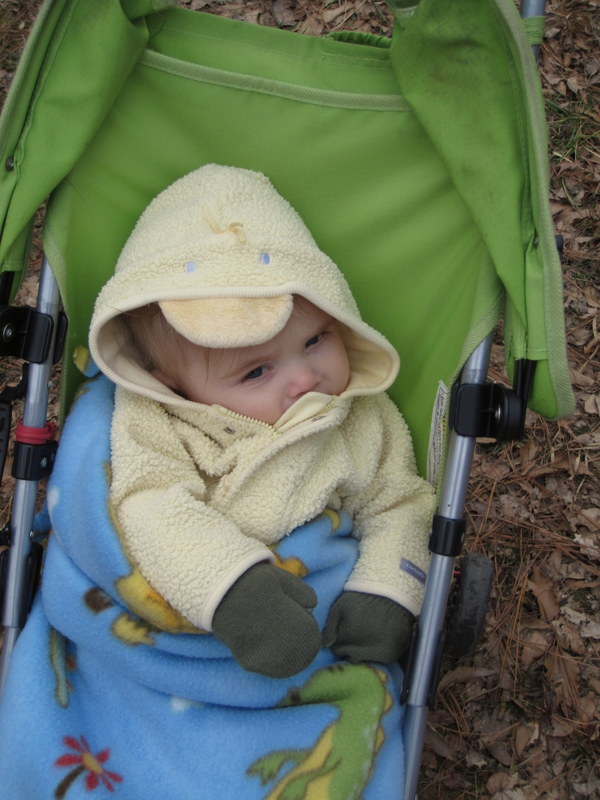 Miriam insisted on pushing the stroller a lot... 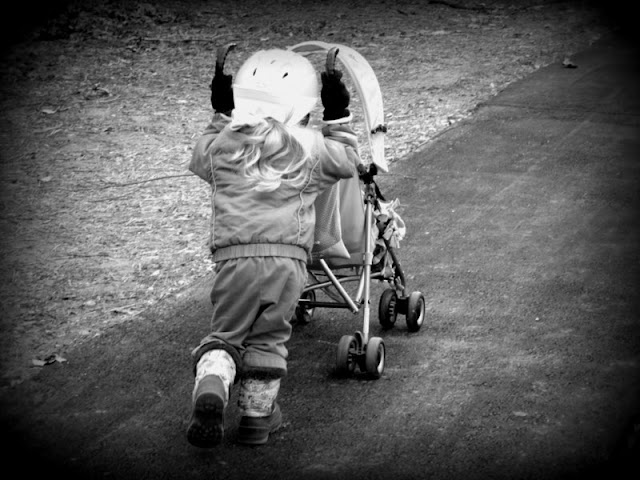 I love all the cardinals around here. I'm not sure I've ever seen one before but they're all over the place here so now I see them all the time. They're quite easy to spot—I wonder how any survive predation at all! The females are actually relatively dull but the males...aren't. 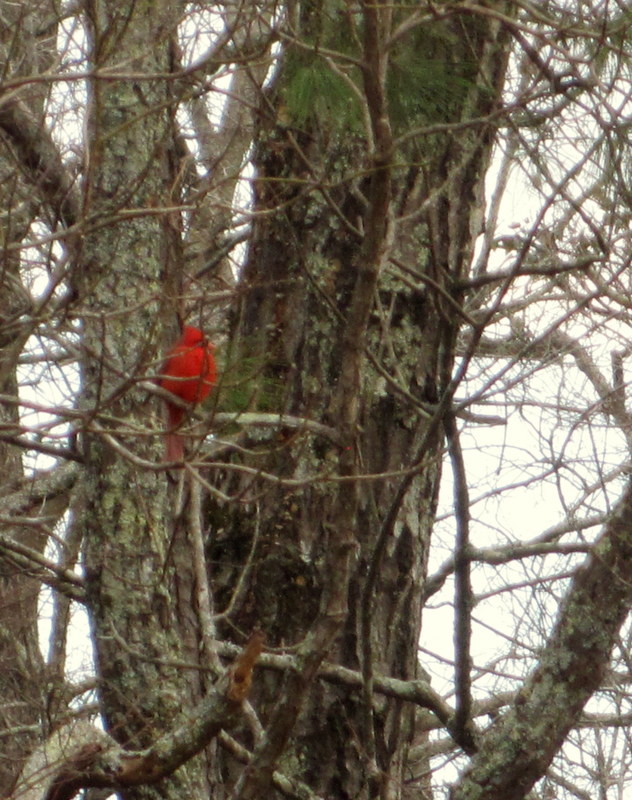 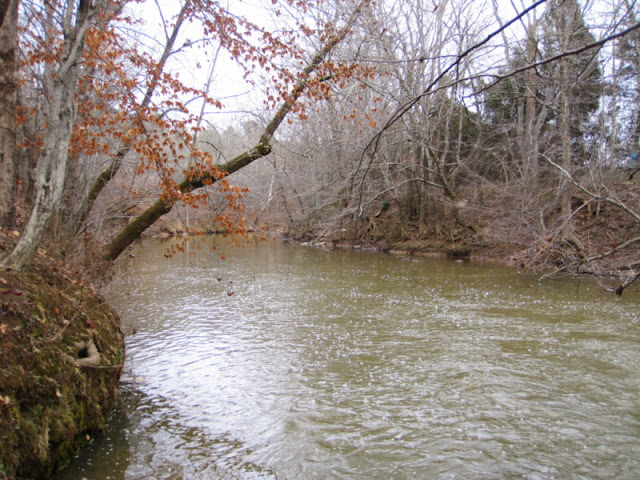 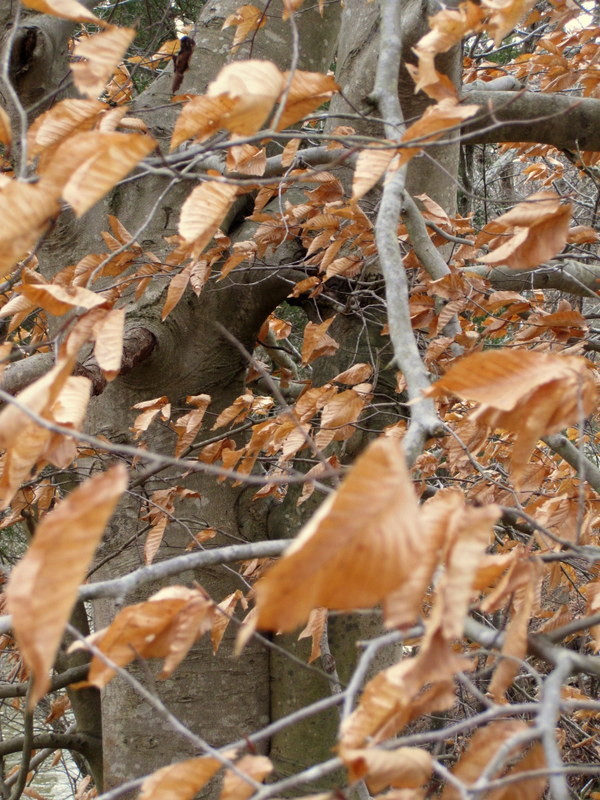 From on top of the play structure I got a lovely shot of Rachel pedaling and balancing all on her own; it only lasted for a few seconds so it was a lucky shot. She tired out of riding soon after (she'd been going at it for about an hour!) and joined us on the playground. 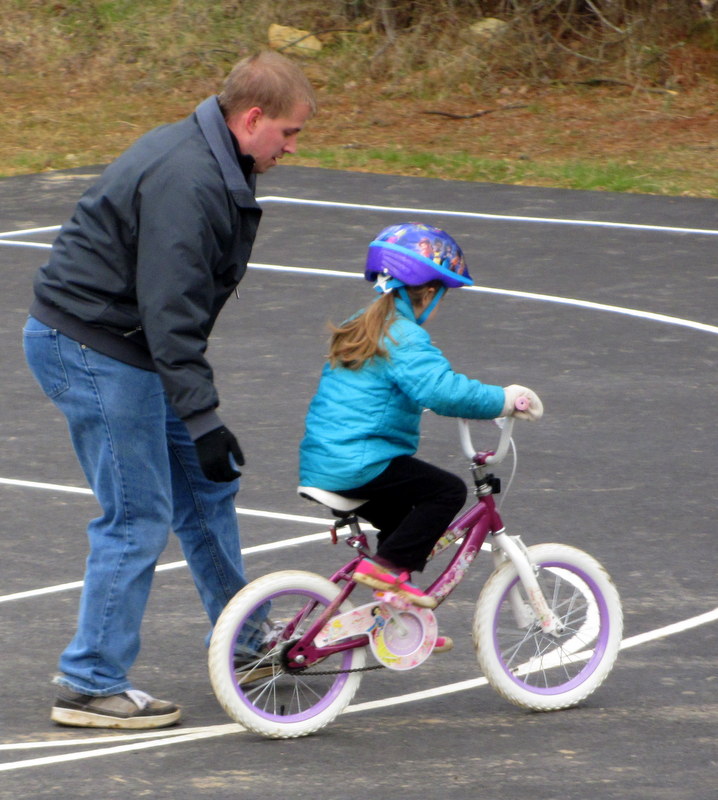 When Miriam saw that Rachel wasn't wearing her helmet anymore she asked me to take her helmet off as well. "Take me off of my helmet, please," she said. 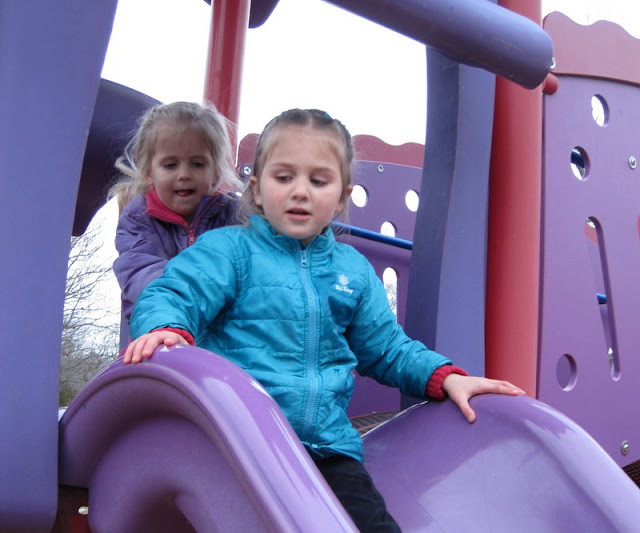 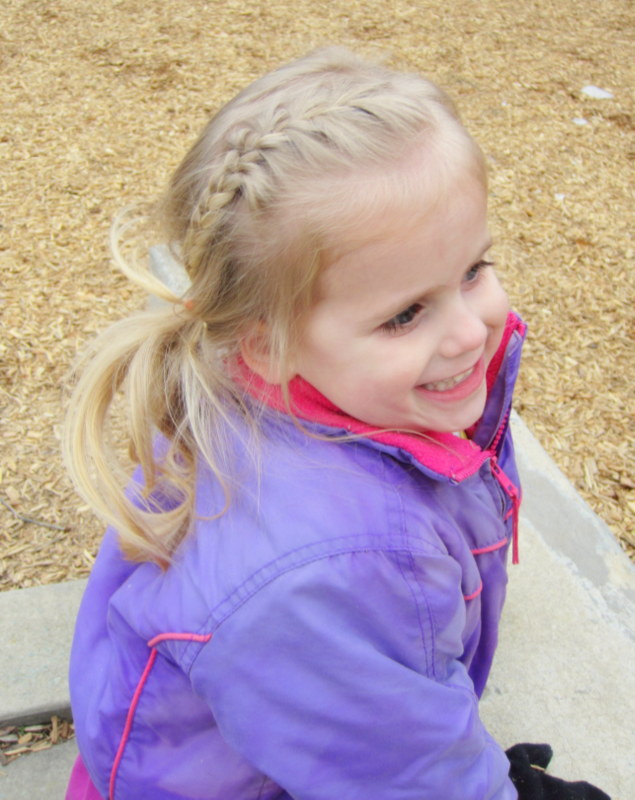 One of the slides had a little frozen puddle at the bottom. Andrew and the girls broke that up and played some ice games—they raced ice chunks down the slides for a while before Andrew noticed that the slide had a little bump in it, which meant that when the girls went down they would be in the air for a split second. He started playing what he called "ice bowling" with the girls. They'd go down the slide and he'd try to slide the ice up the slide and time it just right so that the ice would go under them when they were up in the air. And then we noticed that if we aimed the ice just right we could get it to slide completely up one slide, across the platform, and down another slide. 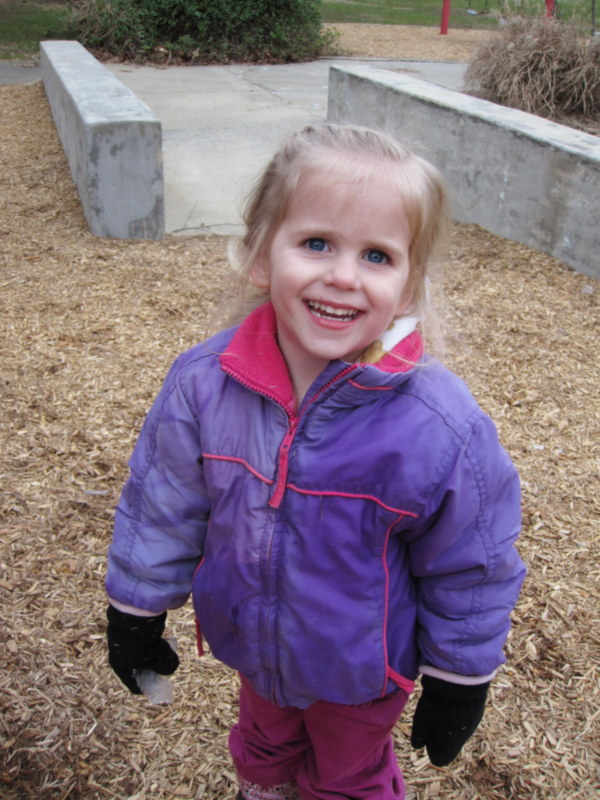 We played with ice until we were all, as Miriam likes to say, "Brrrrr-zing cold!" and then we started a game of catch with a little football we found in the stroller bag. Miriam sat on bench by sleeping Benjamin for a while, eating a snack and resting, while Andrew and I played piggy-in-the-middle with Rachel, a game that she hated. That game was quickly abandoned in favour of regular, ol' catch. 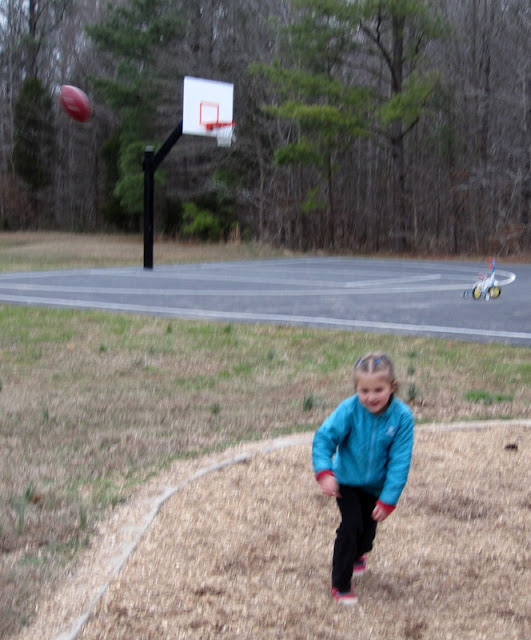 "Let's make a triangle," I said. And for a while Andrew threw to me, I threw to Rachel, and Rachel threw to Andrew. Rachel's got a pretty good arm, she aims well, and she catches great. I have no idea where she got that kind of coordination from! Soon Miriam decided that we were more fun than snacks (I'd just put the leftovers from the ballet bag into the diaper bag and she wasn't impressed when I pulled them out. "But these are from ballet! I want a new snack!") and wandered over to join us.

"Let's make a square!" she said enthusiastically, crouching into her catching position.

"What?" I asked her, a little confused.

"She wants to play, too," Andrew said. "You said we should make a triangle; she's adding another point and wants to make it a square."

Sometimes he's much quicker on picking up what she's putting down. I had completely forgotten that I'd even said, "Let's make a triangle." She'd noticed, though, and remembered.

It was nice to have her in the game, even if she catches and throws like I do (she catches with her eyes closed and when she throws the ball it ends up going no where close to where she's aiming).

We went home for dinner and bath time and everyone was thoroughly exhausted. Andrew decided he didn't feel well and fell asleep on the couch shortly after dinner (before 7:00). I bathed the kids and then sat down to nurse Benjamin while the girls got into their pyjamas. Miriam's were a little inside-out so she started crying for help; Rachel helped her because I couldn't. I was a little surprised when only Rachel came out of their room for story time.

"She hasn't even brushed her teeth!" I said. "That's okay. I'll help her after I finish nursing Benjamin."

"She's already asleep, Mom," Rachel informed me. "She fell asleep really fast. Like, she just sucked on her thumb like five times and then she was asleep."

Benjamin fell asleep while I was nursing him so I put him to bed and Rachel and I had story time together (for a while until Benjamin woke up).

"This is nice," Rachel told me. "Just me and you. I don't have to fight with Miriam. I can just listen to the story and snuggle beside you."

"You don't have to fight with Miriam when she's awake," I pointed out.

"Yeah, but we bug each other," she explained.

Benjamin woke up in the middle of the second chapter we read from Little House (the little stinker!) and stayed up until 10:30 (the little stinker!). Rachel was in bed by 8:30 with lights out by 8:45 (we've given her "reading time" in her bed at night which has made bedtime so much easier). Benjamin and I just hung out together. We did a lot of crying over incoming teeth (mostly him) and some laundry (mostly me). He went to bed (hopefully for a few hours this time) at 10:30 and I've just been killing time, waiting for the last load of laundry to finish drying (Andrew's Sunday pants are in that load).

It's kind of strange to be the only one awake because usually I'm begging Andrew to go to bed around midnight. Tonight I forced him off the couch and into bed shortly after I sent Rachel to bed. It was kind of a sad little tragedy in my life that I had to stay awake and do laundry!

Everyone is asleep but me.

But...the baby's crying again...so scratch that last sentence. Looks like it's me, Benjamin, and laundry for the second time this evening...
Posted by Nancy at 11:54 PM