Just over eight months ago Benjamin was given a t-shirt by his Life Flight crew when they packed him up and carted him away—to another hospital in another city, leaving me all alone in my small, depressing recovery room. I remember looking at that t-shirt and wondering how he'd ever fit in it. He was so scrawny!

He's now three times the size he was then so I pulled out the shirt. It fits him quite nicely. 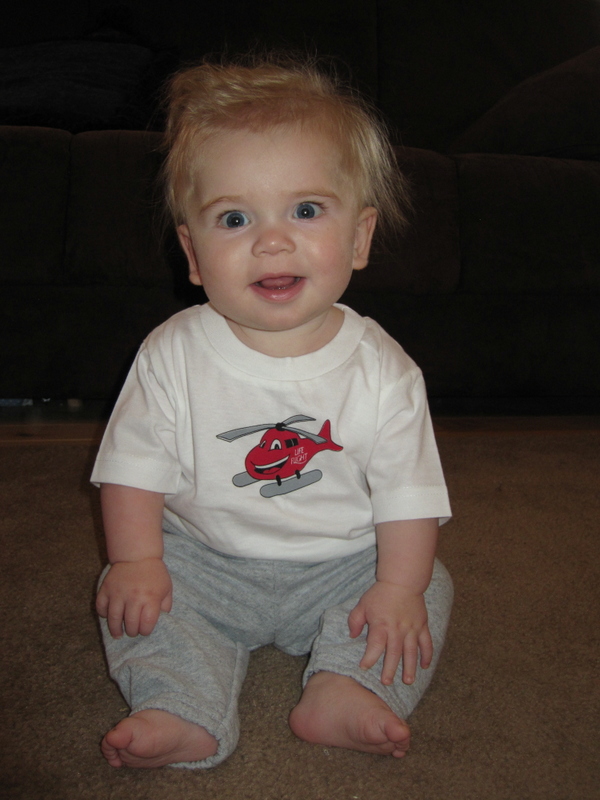 Reflecting back to our time in the NICU is kind of strange tug-of-war for me. Part of me wonders how we ever survived. The other part of me wonders if it was really that bad. Overall, I think we had a fine experience—because...look at that boy!

Andrew was telling me about the Peak-End Rule and said that he mentioned our stay in the NICU as an example of the Peak-End Rule at work (and his classmates maybe didn't understand...but that's okay). Our peak was probably Day 1—when I went into labour, had my baby, had my baby taken away from me, and didn't get to see him for over 24 hours and didn't really know how he was doing. That was a bad day.

When I finally got discharged and they asked if I needed a wheelchair I declined and basically danced out of the hospital. Antsy, they called me. Antsy!? I was ready to run from one hospital to the other (because I can run that far (11 miles)).

It's a strange feeling to go through pregnancy and childbirth and then not get a baby at the end of it.

I realize my pain doesn't equal those of mothers who really don't get a baby at the end of it, or who never get to the end of it at all. I was only temporarily without my baby and it was tearing me apart. It was terrible. And the five weeks we spent in the NICU was so tiring and exhausting but got to be fairly routine toward the end.

Our ending though, was beautiful. We were overwhelmed...with joy...with pride...with responsibility...and a little bit of fear. Mostly, though, we were overjoyed to be bringing our sweet baby home and that he was fine. He was eating on his own, he was breathing on his own, and we thought he was the most talented baby on the planet (because eating and breathing is hard and takes serious skillz (with a z)).

So, that Peak-End Rule, as explained (and invented!) by Daniel Kahneman, is that "subjects' retrospective evaluations of both pleasant and unpleasant experiences [are] well-explained by a peak/end rule: a simple average of the quality of the experience at its most extreme moment and at its end predicted retrospective evaluations with substantial accuracy" (p. 227).* And our experience, I think, has a bit of a rosy tint to it. Like regular childbirth, only different because this was a tad more extreme than regular childbirth.

Right now, thinking about childbirth doesn't scare me one iota. Now, that might have to do with the fact that it's not an impending scenario (because I usually am struck with an epiphany at the beginning of the third trimester, like, "Oh, yeah—this isn't all kicks and squiggles...I actually have to push this thing out!")  but it also might have to do with this peak-end rule—that my end experience (getting to hold a new baby) is more positive than the actual birthing of the baby. I like babies, what can I say?

But having a baby early and having them live in the NICU is less fun (much, much less fun). So, it isn't as rosy an experience as an uncomplicated birth but in the end I still got to bring home my sweet baby boy, so by definition of the peak-end rule I am able to look back at the experience as a whole and think to myself, "It wasn't that bad!"

If you would have told me I'd even suggest thinking that eight months ago I might have gotten violent. Or broken down sobbing. (One or the other; I was so unpredictable (my emotions were shot)). Now, though, I'm looking back and almost wondering how I didn't hold myself together better (but not quite because I still remember how crazy it all was).

There are still lingering effects from Benjamin's birth...

1) His reflux. This boy is keeping a diet of breast milk, pears, apples, and pablum until he can keep from spitting everything up....because this one time I fed him carrots. That was a bad (and very orange) day. Being covered in spit up is one (very normal) thing; being covered in orange spit up is a completely different thing. The same formula can be applied to carpets, couches, burp cloths, and baby toys. Cleaning up clear/white spit up is simply less gross/work than cleaning up orange stuff.

2) He's a baby (and he often boycotts the very idea of sleeping). So I'm tired (a lot of the time). But I hear that babyhood is something kids grow out of. I'll just wait this one out.

3) I'm having a hard time trusting my body. We've always talked about more than three kids, but sometimes when I think about having more I'm terrified of a repeat (or worse) of "last time." I don't know why I went into labour early and I don't quite trust my body not to. But at the same time I keep telling myself that "it wasn't that bad" with Benjamin and that I've already carried a couple of pregnancies to full term, no problem. But pregnancies seem so complicated lately. The majority of people I know who've had babies the past year have had serious complications. Granted, my pool of people is a little skewed considering my little NICU support group who each obviously had a story to tell (preeclamsia, hellp, intrauterine growth restriction, placenta previa, heart defects, and many other situations ranging from the very serious to the less serious—and every single story a tear-jerker). The good news is that I don't have to worry about that for quite a while because, as I keep telling my girls (who've decided that what they actually wanted was a sister), "We have a baby, thank you very much."

And we're so lucky to have that baby. I remember walking out of the hospital, without a baby, thinking to myself, "My arms may be empty, but my heart is full."

He's such a wonderful baby. And we were so blessed with so many miracles surrounding his birth. But it was still hard. It was so hard. And I still find myself getting emotional about things...like friends going into labour unexpectedly a month and a half early...and another one trying to take it "easy" with three other sons at home because she's got placenta previa and is a ticking time bomb...and another one whose poor boy was born with half a heart, a defect deemed "inoperable," and is just soaking up all the time she can with him until Heavenly Father sees fit to call him home...and others who've lost babies...

T-shirts can also make me cry.

But only if they have little red helicopters on them.