The year is dying in the night

Around this time last year we sat down and made a list of family and individual goals to work on in 2013. We did fairly well, especially on the goals we were able to break down into manageable chunks.

1) One of our goals was to go on 100 family walks together (and also swims and later in the year we started counting family grocery shopping trips as well). Andrew, our resident nerd, has made a graph of the walks we took throughout the year: 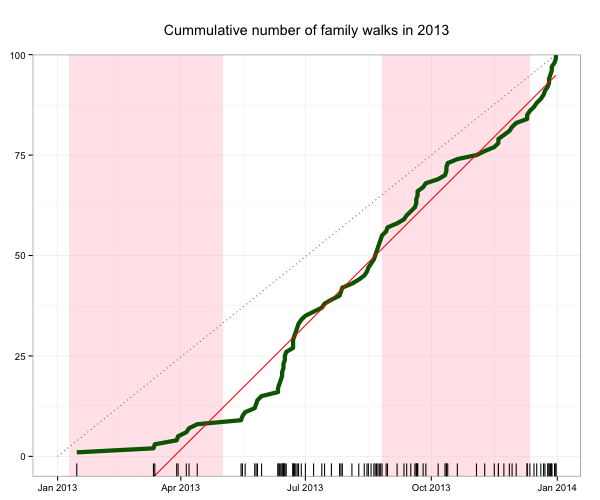 We haven't technically gone on our 100th walk yet; we'll do that this evening. Due to inclement weather our neighbourhood had to postpone the Christmas luminaria so we're having our luminaria tonight instead. We're looking forward to it!

The ticks at the bottom represent days walked. The green line show cumulative walks through time. The grey dotted line shows our ideal curve (?) of about two walks per week. The red line shows our actual curve (?). The pink shaded area represent Andrew's semesters in school. I'm really not sure why he did this graph in red and green because that's a big graphing no-no due to the difficulty a colour-blind person would have interpreting the graph (though they seem to be the default colours for whatever reason).

You can see that spring semester (January through April) was a rough semester. You might also be able to pick out our trip to Florida (we did a lot of walking and swimming on that trip). We've been doing a big push this winter break to finish our goal.

We're going to repeat this goal next year, though the girls want to add bike rides (which means we need to tune up our bikes).

2) Another goal we had was to invite twelve families from church over for dinner. We ended up hosting thirteen dinners, not including feeding the missionaries. We're repeating this goal as well, though we're knocking it down to eight families rather than twelve. I'm just that much of a recluse.

We kind of followed the walking chart trend, having one family over in January, four in May, two in June, two in July, one in August, one in October, one in November, and one in December.

It's been a nice reason to get to visit with people I wouldn't otherwise have the chance to since I'm in primary and don't get the chance to socialize much. Perhaps we'll even get brave and invite the neighbours over for dinner...

3) We also wanted to dedicate 12 FHE lessons to family history, which we did. It was fun to do research on our ancestors and share stories with our kids. Everyone wanted to repeat this goal.


Our rules were basically that we couldn't repeat any activity and count it as an adventure. We're going to repeat this goal, though we might allow repeat locations from 2013 in our 2014 list. We're open to suggestions on places to visit—as long as they're cheap...or free.

5) We wanted to go to the beach three times; we ended up going four times.
We're also repeating this goal next year, but we're kind of combining it with our North Carolina adventures goal since we double counted them, anyway. The girls want to make four trips to the beach. We'll see how we do.

6) We wanted to make two out-of-state adventures. We went to Florida (and technically hit South Carolina and Georgia on the way down) and made it to Tennessee when we did our trip to the Appalachians. Next year we're going to try for three out-of-state adventures (since we know we'll be going to Georgia at the beginning of the year and have plans to visit friends in DC as well; that means we just have to leave the state once more).

7) We wanted to finish reading The Book of Mormon as a family within the year. In the past it's taken us about two years to get through it each time, which is respectable enough. We made an effort to read more each night but realized a couple of months ago that we weren't going to get all the way through it so we changed our goal to just get all the way through Alma. We're set to read Alma 63 tonight. Considering we took off the entire month of December to do Christmas devotionals every night instead of reading from The Book of Mormon, I think we did fairly well.

Next year we're going to work on memorizing some scripture mastery verses from the Old Testament. The girls know all the Articles of Faith because when it's "too late" to have family scripture study we just repeat them all—in the car if we're driving home late or whatever. We think that we'll be able to memorize twelve of the twenty-five scripture masteries by the end of next year.

We're also making a daily scripture study chart for each member of the family.

8) We wanted to finish laying out one year of our blog to print in book format. We didn't even start this goal. It was too big and vague and overwhelming.

We kept it for next year but did a better job breaking it into manageable chunks. We're hoping to have the bulk of the design work finished by the end of January and then have a list of months to cross off as we finish laying them out.

9) Our last goal was to "make shed awesome," which was also a rather big, undefined goal, but we did it! We put up some shelves and got everything much better organized. I'm not sure I'd say it's awesome, necessarily, but it's certainly much better than it was.

This is the one goal we're not keeping for next year. Instead Andrew and I are thinking about biking an absurd number of miles on our exercise bike (cumulatively). Perhaps "across" America or "across" the ocean. We haven't quite decided yet. We'll keep you posted.

Rachel's personal goals last year were to climb to the bird's nest in the tree in the front yard. She came storming inside sometime in April and yelled, "Well, that goal's cancelled!"

"The nest is gone!" she wailed.

I think she still climbed as tall as the nest, so it counts.

She also wanted to be nice at school, which I think she succeeded at, and to learn to swim, which she certainly did, going from doggy paddling in a floaty to swimming across the length of the pool on her own!

Next year she will have a busy year. Daddy is going to give her 52 piano lessons. She wants to learn how to switch between chords on the ukulele. She wants to do some typing lessons (Andrew found a good program online). She also wants to take ballet or gymnastics. We'll see.

Miriam's goals were to read a book all by herself, which I thought was a lofty ambition, but she stuck to her reading lessons and managed to learn to read well enough that she's read several books all on her own. She loves to read Dick and Jane books.

She also had a goal to stop sucking her thumb. I think her thumb-sucking frequency has diminished but, alas, she hasn't kicked the habit entirely.

Next year Miriam wants to finish her reading lessons (we're just over halfway through the program we're using), she wants to learn to swim without a floaty (perhaps not across the pool but at least from me to the wall or from the wall to me), and she wants to take ballet lessons again.

Rachel also said she would like to learn to change diapers, though that puts her at odds with a goal of Benjamin's (which is to get out of diapers entirely). The clock is ticking on that goal, I suppose!

Anyway, we had a fun evening last night discussing goals and resolutions (when we asked the kids what a resolution was, Rachel said it was like a goal, and when we asked them what a goal was, Miriam said it was like soccer), how we are commanded to be perfect but that the way we become perfect is by small and simple things. We talked about how to have a plan to complete your goals and worked hard to make sure our goals were divided into "manageable chunks," (Andrew's term—it's very technical, I'm sure).