Get well soon art/books from my kids

The children spent the early afternoon colouring pictures for me and when Benjamin could no longer stand being away from me Andrew let them into the bedroom (I've been quarantined) to give me their gifts.

Miriam plastered my wall with pictures so that I can look at them while I get better (some of which are pretty fantastic): 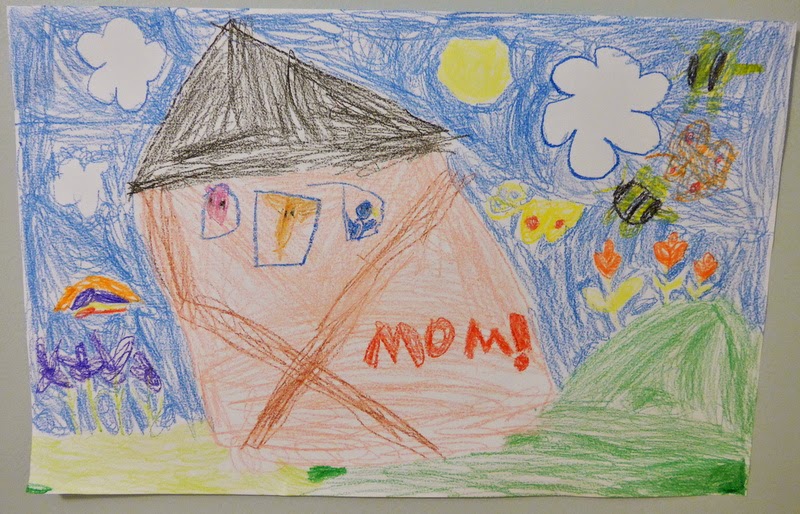 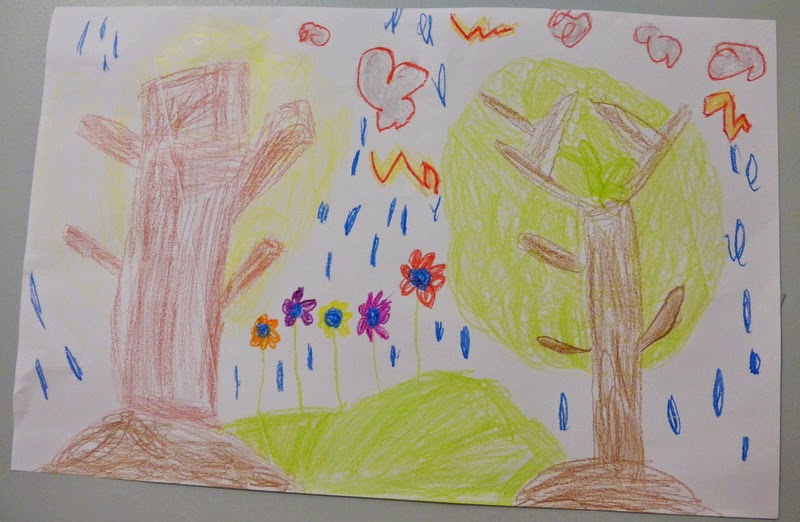 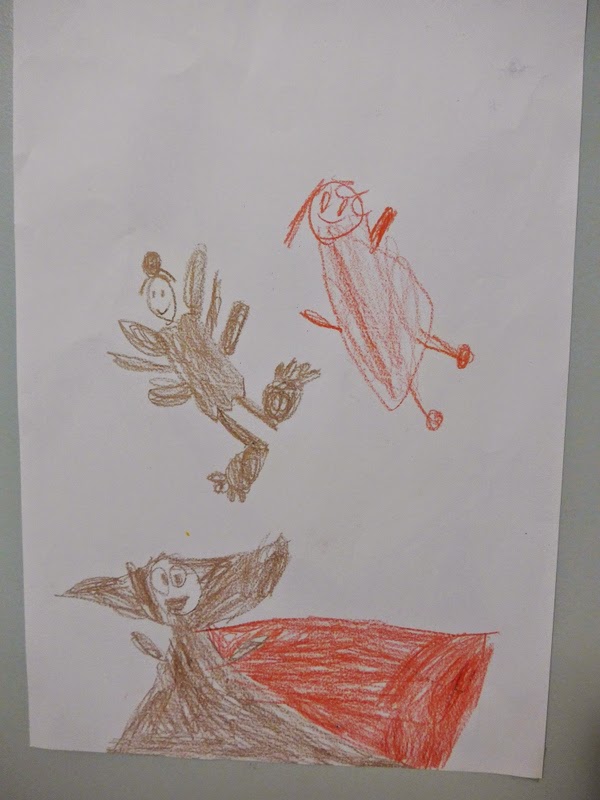 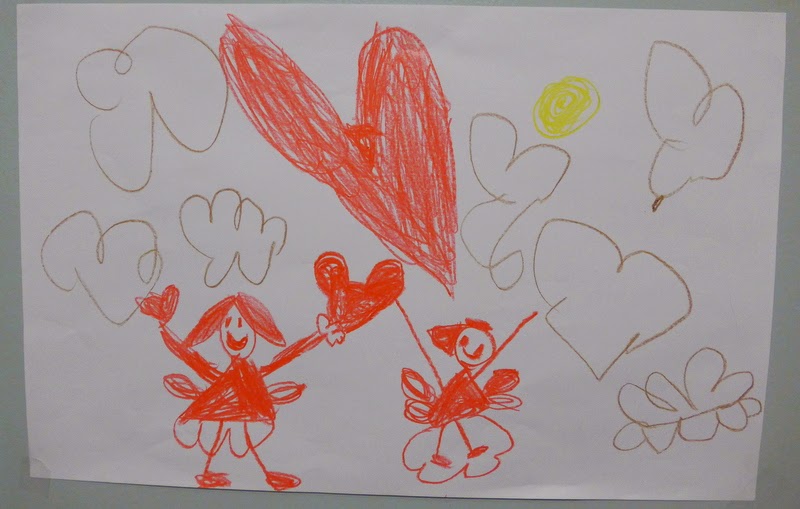 I actually think this is an old picture of hers that was already on the wall...but it's adorable so it made the cut: 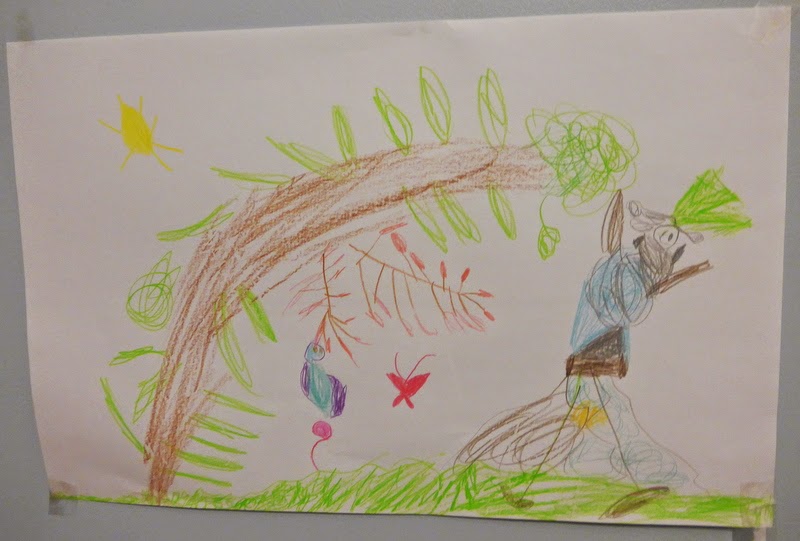 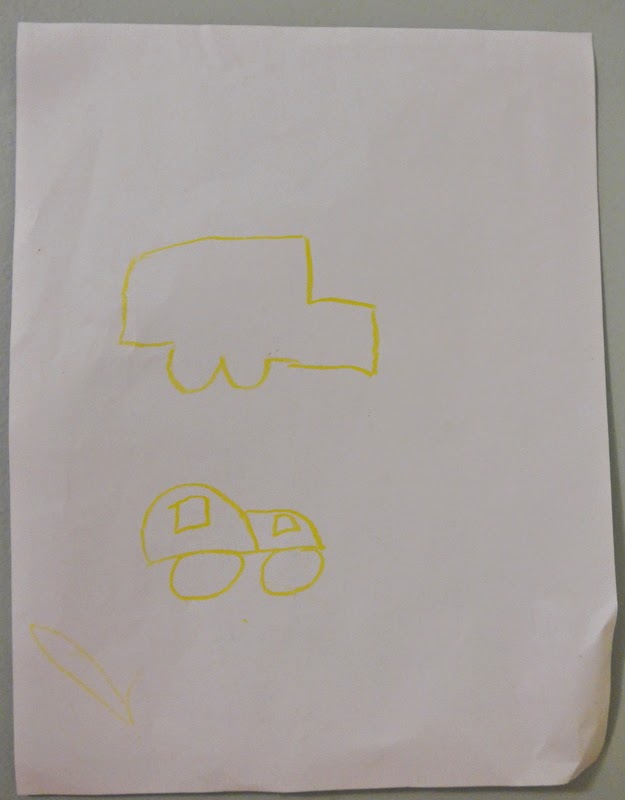 Now that Rachel's home from school and I've been in bed for days on end he knows that she'll jump up to do anything for him and I, well, won't. (She's even been taking him potty). He can't reach the tape because we keep it on the mantel—like classy people—which is why he needed Rachel to get it for him.

Instead of making me something to tape to the wall, Rachel made me a book. 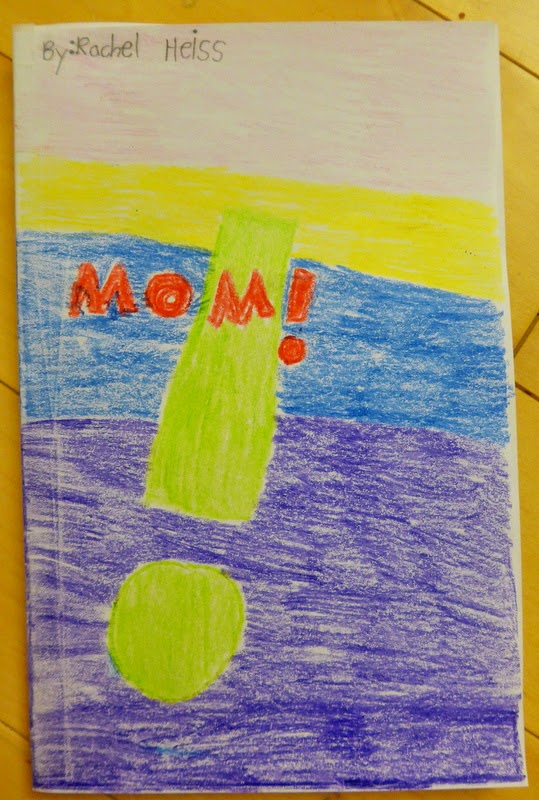 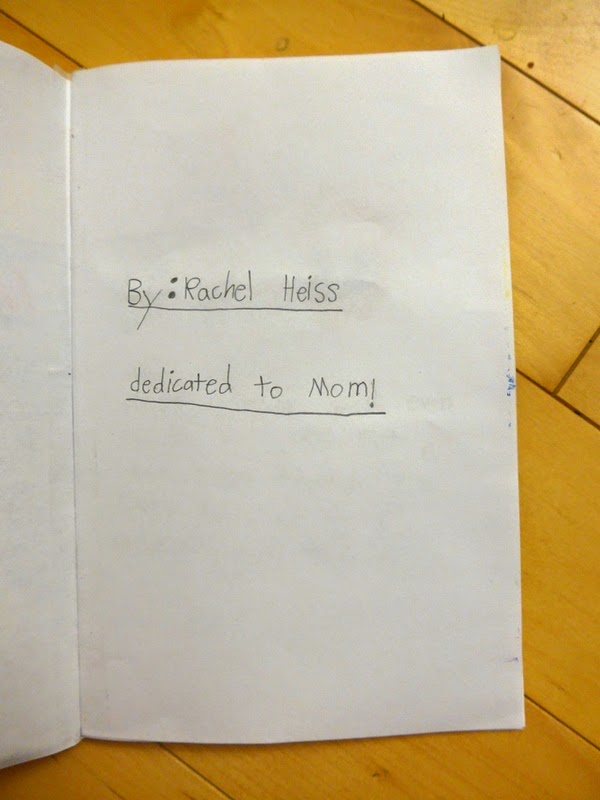 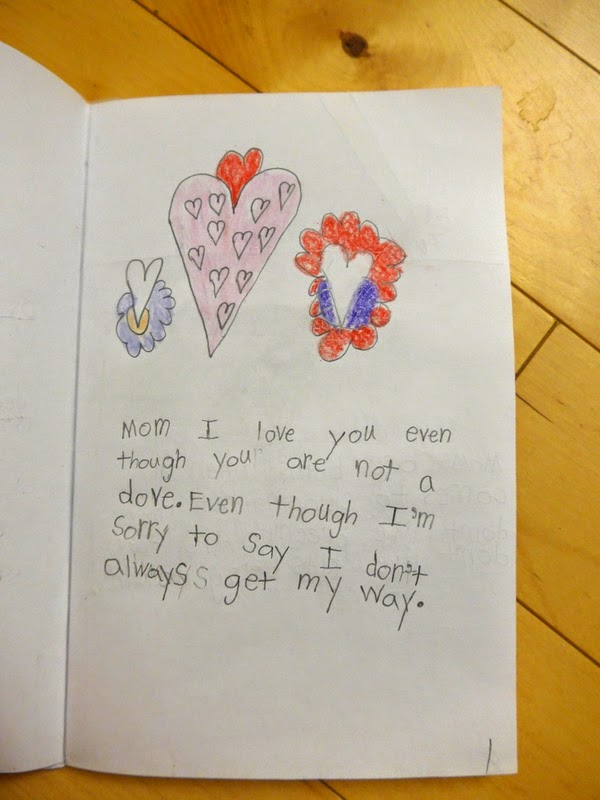 "Mom I love you even though you are not a dove?" I read.

The whole book is a poem. Evidently.

Mom I love you even though you are not a dove.
Even though I'm sorry to say I don't always get my way. 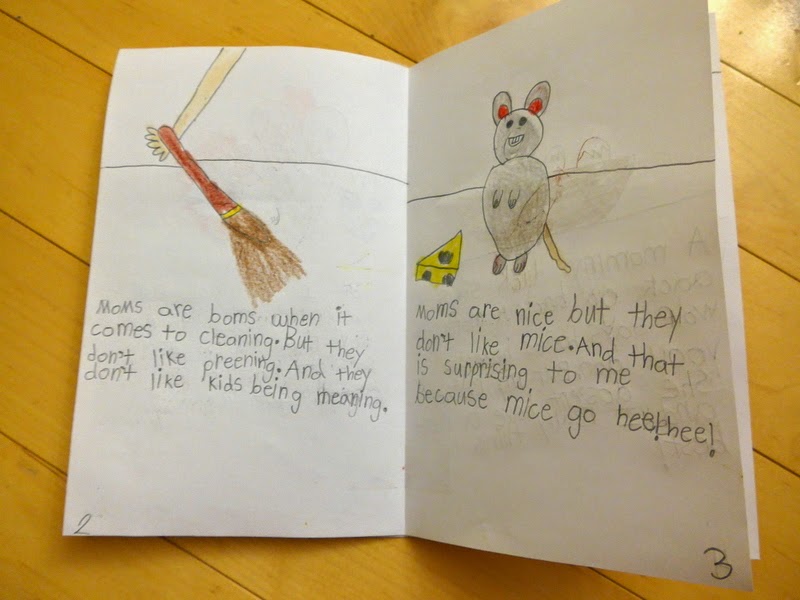 Moms are nice but they don't like mice.
And that is surprising to me because mice go hee! hee! 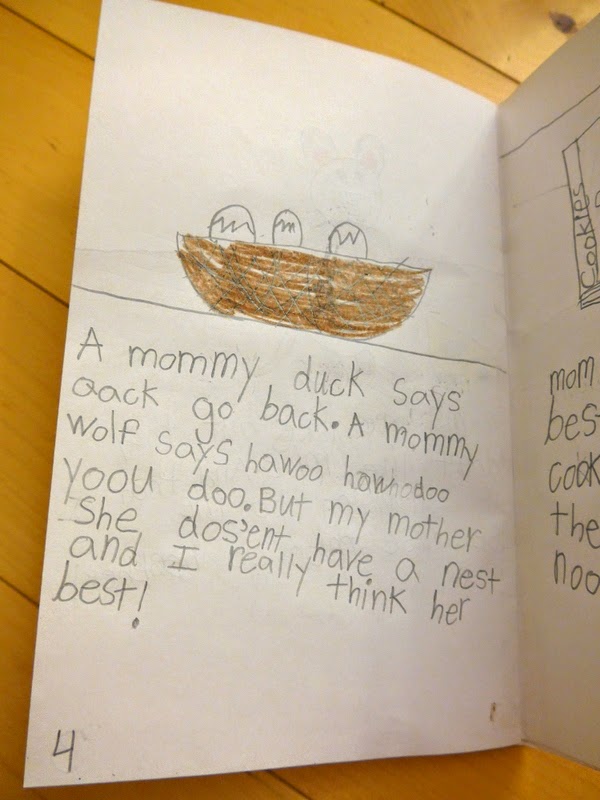 A mommy duck says qack [sic] go back.
A mommy wolf says hawoo how doo yoou doo.
But my mother she doesn't have a nest and I really think her best! 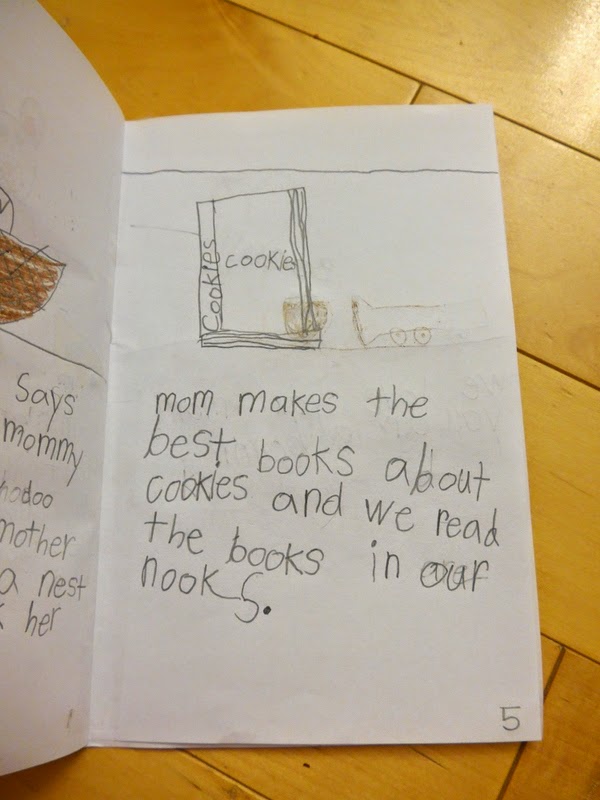 Mom makes the best books about cookies and we read the books in our nooks. 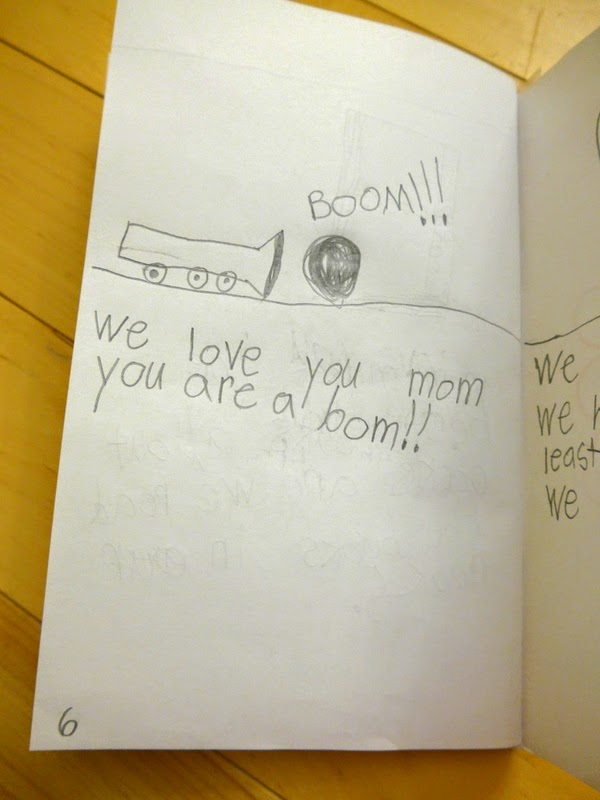 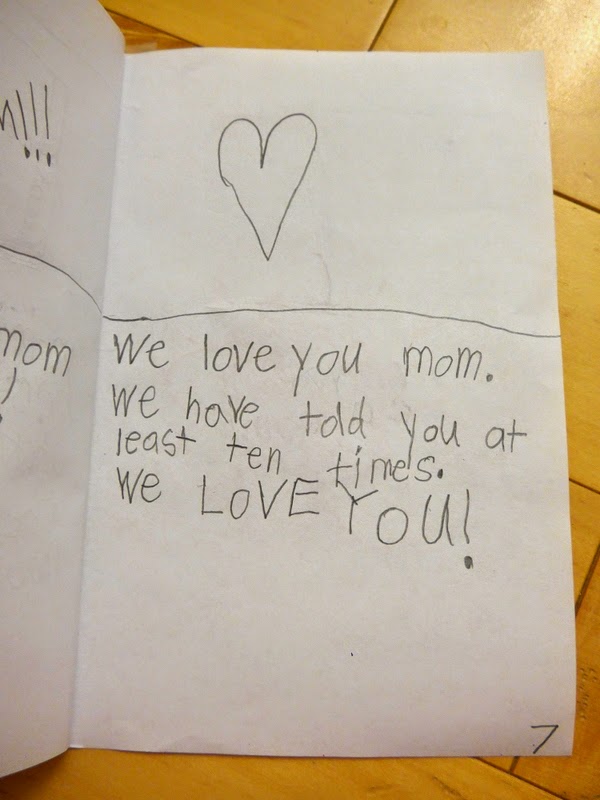 We love you mom.
We have told you at least ten times.
We LOVE YOU!

I'm trying to get better, I promise. Just...the burning!

Both Miriam's and Benjamin's pink eye cleared up within a couple of days. Mine started in my left eye on Friday night (I thought I'd just gotten something stuck in my eye...but apparently not), which was completely infected by Saturday morning. And then The (Dread) Pink Eye spread to my other eye and they've just been getting worse and worse.

My eyes are glued completely shut every time I wake up (whether I've been asleep for two hours or six hours—doesn't matter; they're glued together). I totally walked into the bedroom door this morning at 4 AM, trying to find the bathroom so that I could hot-compress my eyes open so I could put drops in so I could find some more ibuprofen to take because not only do I have pink eye but I also have tonsillitis.

My doctor gave me a print out for "sore throat" and I was a little offended by that because my tonsils are like huge swollen puss-balls (you're welcome for that image).

I didn't go to the doctor for my throat though because we already took Miriam into the doctor for her throat and he took one look and said, "I'm so sorry—that's definitely viral." And then her rapid-strep test was negative. Joy.

Well, my doctor said that she'd like to examine my throat anyway because of all the symptoms I'm having (fever, chills, headache, whole body ache, no cough). She took one look and said, "That's definitely strep." And then the rapid strep test was negative and she said, "Well, that's good news, then. It's not strep."

And I was like, "Good news?! How is that good news?! You can fix strep. You could prescribe me antibiotics and I would feel better within hours of taking them (and I know this because I got strep throat when I was pregnant with Miriam (not once but twice) and the relief of my antibiotics was swift and serene). But this I have to just 'ride out.' How is that good news? Do you know how much pain I'm in?!"

But those were all inside words. And then she gave me a print out for "sore throat." Because this is totally your run of the mill sore throat. I'm not a doctor so I don't really know what tonsillitis entails but I can assure you that my tonsils are nasty right now so I'm calling it tonsillitis. I can hardly move my body and it sounds so much better to say.

Andrew's been working at home and taking care of the kids the past few days. Today they had to go to the store to get more milk even though we got milk not too long ago because they've been having cereal for breakfast, lunch, and dinner. That and left-over Little Ceasar's Pizza. (Which is rather ironic because, truthfully, he's the better cook around here—but watching little people all day and then trying to cook a decent meal is rather overwhelming, I have to admit).

They've been watching a lot of the World Cup, a lot of Strawberry Shortcake, a lot of Thomas the Tank Engine, and a lot of Chuck the Truck (which is apparently a thing). I think they've thrown on a few Disney movies. Oh, and Handy Manny.

But the girls have also been playing together quite nicely (when Miriam hasn't collapsed on the couch or bed with a fever) and have been helping take care of Benjamin. Rachel's been doing a ton of reading while Benjamin is napping and Miriam is fitfully resting (she's not sick or tired). She's finished the first three books in The Mysterious Benedict Society and is loving them. Andrew thinks that the character Constance Contraire inspired Rachel's charming poetry this afternoon.

He also just about died of joy when Rachel came out of her room last night to discuss the prisoner's dilemma with him.

"Dad, have you ever heard of a thing called the prisoner's dilemma?" she asked.

"Have I ever heard of a thing called the prisoner's dilemma?" he smiled.

"It's not an actual thing, I don't think. Like I don't know if it ever happened. I think it's an idea," she said and then launched into a very accurate description using words like 'betray' and other grown up things like that.

They had a very adorable conversation about it, if you're into that sort of thing (which we are—even if it gets other people's panties in a knot (Andrew and his love for homework—I tell you!). I'm sure I would have recorded it in greater detail if I were slightly more lucid than I am.

Andrew's leaving for Scout Camp tomorrow (he was supposed to leave today). I am so grateful for friends who jump in to save the day—for a friend's husband for going up to camp for tonight (he's only available for tonight) so that Andrew could hold up the fort one more day, for the friends who are taking my healthy ones out for the day tomorrow and Saturday, and for the friend who volunteered their teenage daughter to come be mother's helper on Friday afternoon (she needs to log some service project hours—thank goodness for Personal Progress (though I'm sure she would have done it anyway)).

I'm hoping that in the coming days I can get out of bed without convulsing with the chills (Andrew has been making so much fun of me (and taking such good care of me). I'm shaking so badly writing this (which is a sign it's time to crawl back into bed)).
Posted by Nancy at 11:39 PM