Benjamin was beyond excited for "Gampy" to visit. He happily helped get things ready and was so proud to be giving up his bed for Gampy. "Gampy seep my bed!" he'd say whenever we talked about Grandma and Grandpa coming.

When we went to pick them up at the train station on Friday night, Miriam raced to Grandma at lightning speed and jumped into her arms. Benjamin tore off after her but stopped dead in his tracks when he realized Grandpa wasn't there. "Ere Gampy at?" Benjamin asked.

"He went inside to check on our suitcases," Grandma said.

He waited patiently for Grandpa to join us outside.

"GAMPY!" he squealed as soon as he saw him.

Those two immediately became buddies. Grandpa didn't have much choice in the matter. It had been decided upon before he'd even arrived. When I asked Benjamin what he was going to do when Grandpa came to visit he said, "Me give Gampy big hub, pick him up, put him on mine head!"

He got as far as the hug. Grandpa was a bit too heavy for Benjamin to pick up. 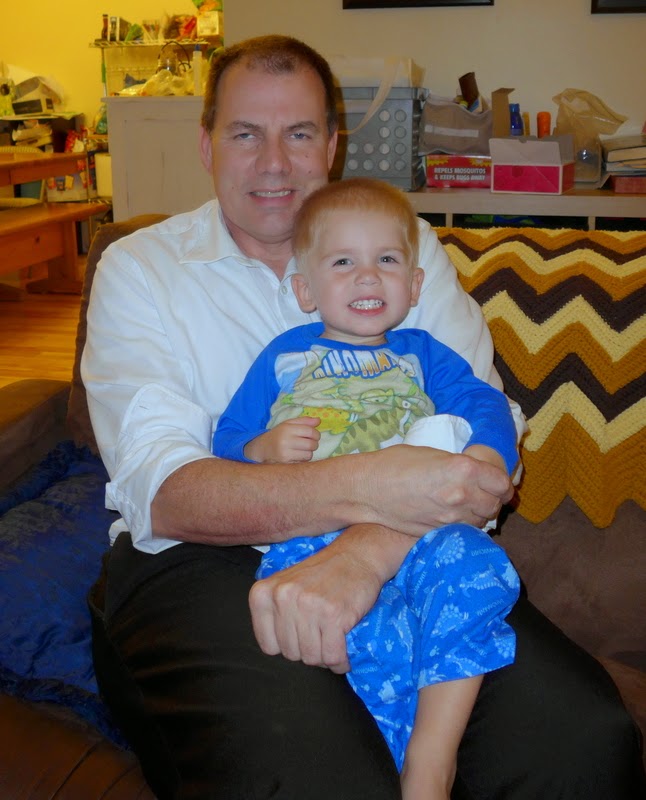 Much to Grandma's consternation, Benjamin decided it was okay to call her "Gampy," too.

He called her "Other Gampy" until we managed to convince him that Grandma had an entirely different name altogether—and then he started calling her "Gampy-Mom." I believe it was Saturday morning when we'd all loaded into the van to visit the library...except for Grandma who was going to stay home to do her hair. We'd forgotten to say family prayer before leaving the house (once again) so we asked one of the girls to say it and while she was doing so Benjamin was taking roll-call.

And that settled it. Grandma was now Gampy-Mom and there wasn't anything anyone could do about it. She's still occasionally Gampy-Mommy or Gampy-Mama, but mostly she's just Gampy-Mom.

Grandpa was only here between business trips so he had to leave early on Monday morning before any of us were even dreaming of getting out of bed. Benjamin was a little heart-broken to find Grandpa gone and stopped periodically throughout the day to ask where he was.

During breakfast, in the middle of building a LEGO tower, while sitting on the potty. He asked about Grandpa a lot and the conversation was always approximately the same.

"Gampy is in Texas. He went bye-bye."

"No. Gampy's going home to his house."

"No. Not your house. Gampy's going to his house."

Then he'd be sad for a little while until he'd get distracted by another activity, which he'd then lose interest in when he started thinking about Grandpa again.

Interestingly enough he called him Gampy-Dad a few times since he's left—to distinguish him further from Gampy-Mom (who he's been calling plain old Gampy with more frequency since Grandpa left).

The very best part, though, was after dinner when I was in the kitchen and Benjamin hopped down from the table to look for me.

I poked my head around the corner to see what he was talking about and...it was me!

"Super-Mom!" he yelled, running over to me and giving my legs a squeeze.

I suppose I needed something to further disambiguate my name from Gampy-Mom's.

I think I'm okay with the super prefix.
Posted by Nancy at 8:52 PM