On Thanksgiving morning Rachel made a pistachio pudding salad and I started pulling out things to make an actually healthy salad with. Unfortunately when I pulled out the tomatoes they were all moldy so Andrew ran to the grocery store on Thanksgiving Day just to pick up tomatoes.

I suppose it wouldn't have been as big of a deal if it was just our family that we were serving but we were having dinner at a friend/colleague/mentor/ward member's house (it's a multi-faceted relationship; let's just say we had dinner with the Rogersons) and we were only in charge of one thing. We had one job! So off for tomatoes Andrew went.

Benjamin flipped out a little when he saw Andrew getting ready to leave.

"Where mine Daddy go?" he asked.

"Yes, of course I'll miss you while I'm at the store for five whole minutes," Andrew said, rolling his eyes a little. Benjamin's very good at missing people.

Benjamin was clinging to Andrew's leg. Andrew really had no other option.

"Sure, you can come with me. Let's find a jacket for you," he said.

They had a lovely adventure at the store together. The cashier offered Benjamin a balloon and came back with a big mylar balloon in the shape of a piece of pumpkin pie that had been on one of their displays (Andrew was expecting a dinky latex balloon). I guess they figured they didn't have any further use for it.

Benjamin sang about his "punky-pie boon" all the way home. 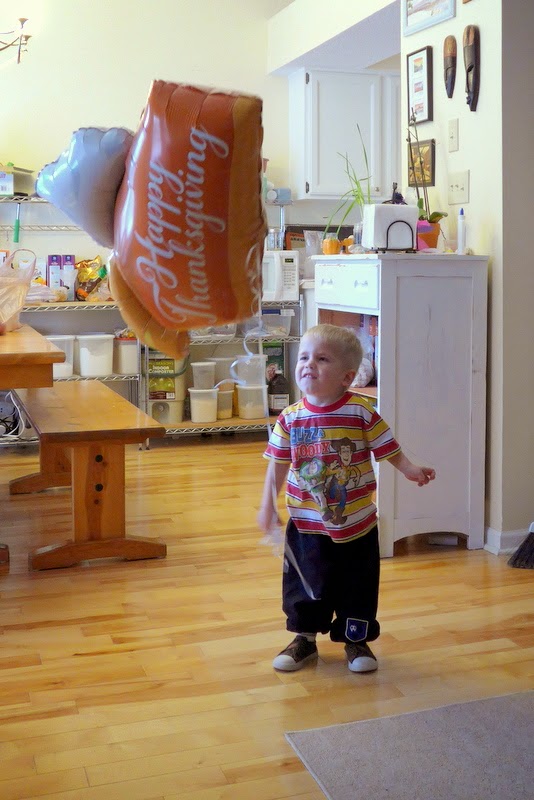 The balloon lived a long and happy life until yesterday after we put the kids to bed—and then Andrew broke out the scissors and stabbed the darn thing. We were so sick of the kids fighting over it and the game where the others would chase whoever was holding it around the house, screaming the entire time, and knocking various things from various places, and...and...and...

It had a good run.

Dinner was fantastic. I was so happy to not have to cook that meal.

Sister Rogerson gave a talk today where she talked about being grateful her husband manages the turkey every year because the touch of raw meat makes her feel like dying. I totally understand that feeling.

Anyway, dinner was fantastic. Rachel's pistachio pudding salad was polished off lickety-split, which was kind of surprising because the last time we made that (for a Fourth of July party last summer) everyone kind of (gently) made fun of us for bringing a Jell-o salad and we had to bring home a ton of leftovers (not that my kids minded at all). Meanwhile, the green salad hardly got touched at all—even with the super-fresh tomatoes I included. Had I know people were so pro-Jell-o salad I would have just left it at that and not sent Andrew to the store!

We stayed after dinner to talk while the Rogerson's nameless teen played with the kids. Then we played games while the kids watched Frozen. We played Bohnanza and Cover Your Assets, in case anyone was wondering (we have a few avid gamers in our family). I don't think we've played Bohnanza since we last played it with the Gillespies, which had to have been at least 2.5 years ago! And we'd never played Cover Your Assets, but it was quite a lot of fun.

That evening Andrew and I set up the tree. He strung the lights. I strung the beads.

The next morning we let the kids at it. They had so much fun going through the ornaments. 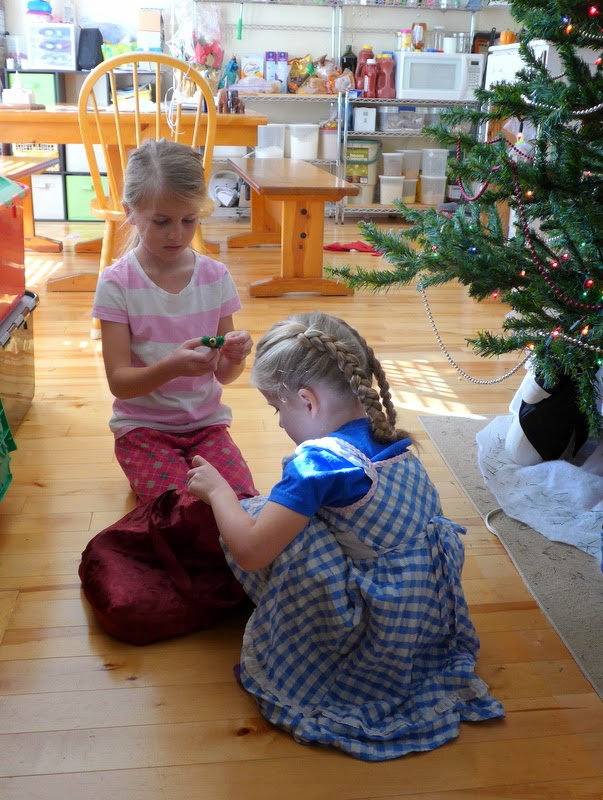 We didn't get out any glass ornaments this year so our tree is fancied up with an odd assortment of homemade ornaments and little plastic knick knacks. For some reason we have a few little plastic bells (I actually think they were from a bridal shower game that my sister planned for me—everyone got a plastic bell to wear around their neck and at any point during the shower if you said "wedding" or "love" someone could take your bell and add it to their own neck? Something like that. I ended up with a bunch of dollar store bells this way) and Miriam loved them. When Rachel pulled one out, too, Miriam said, "Hey, Rachel! Do you want to put our bells on the same branch so they can ring with glory?" 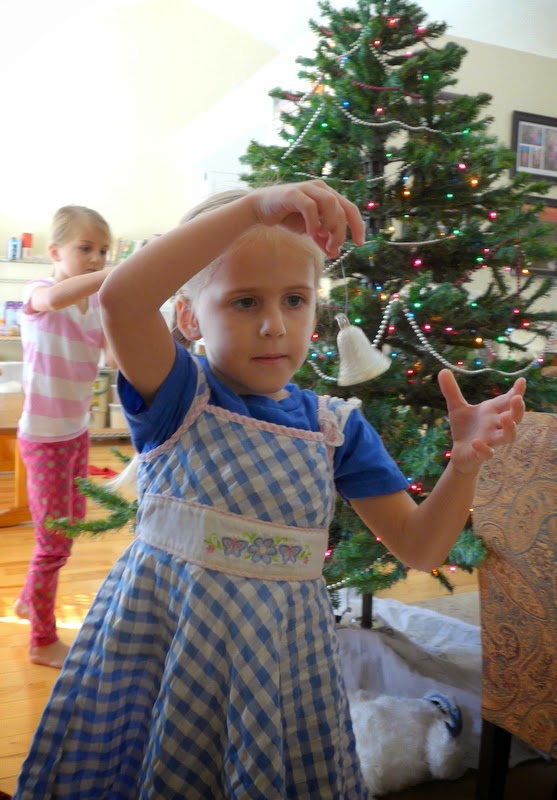 She loved so many ornaments. 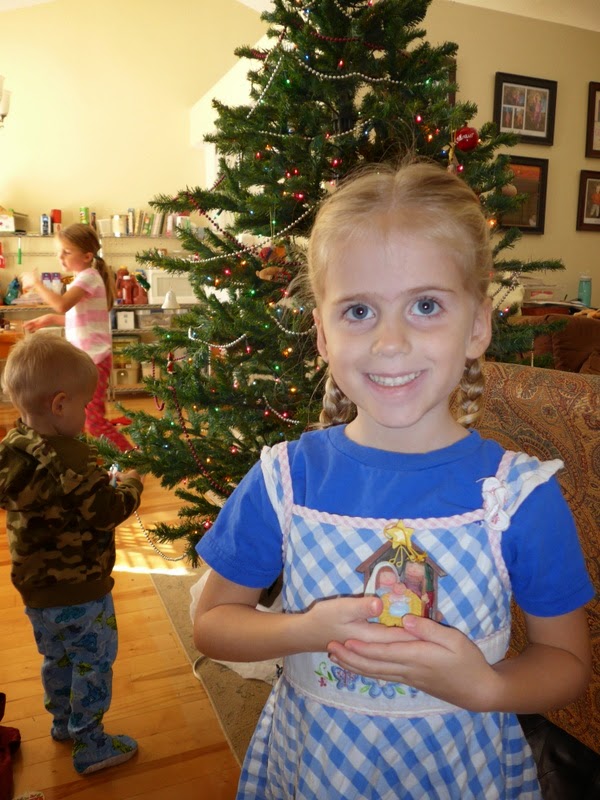 Benjamin mostly loved the vehicles. This one is one of Andrew's (from Grandma Sharon in 1999): 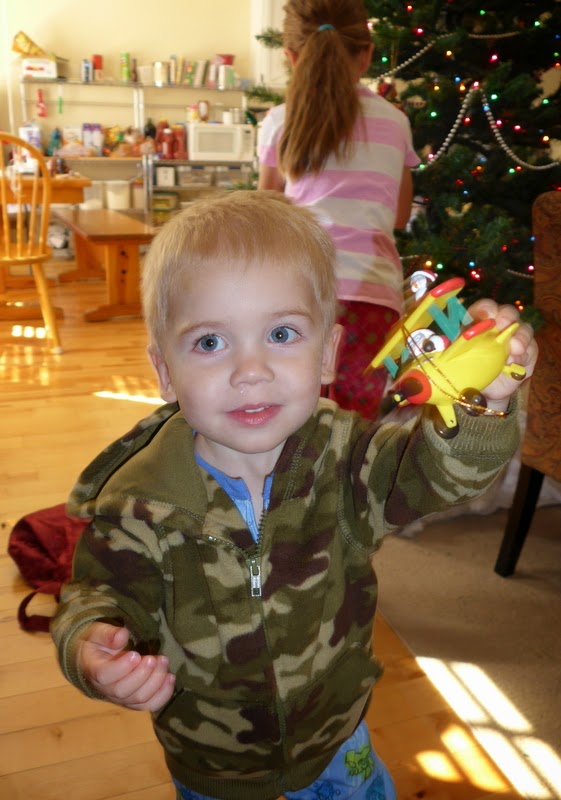 He also really liked one (that is apparently floating around the house somewhere) of two bears sitting in a sleigh, hauling a Christmas tree home. It says, "Our First Christmas Together 2005." I think it was tied around a wedding present.

You guys, we got so many Christmas decorations for our wedding. Let me repeat: So. Many. Decorations.

That's the danger of getting married in December, I suppose.

I'm not particularly attached to that (any) ornament, but I'm also more upset about not knowing where it is than I figured I would be. Find that ornament, children! It is not on the tree.

Update: Miriam just found it with the LEGO. Because of course that's where it would be. 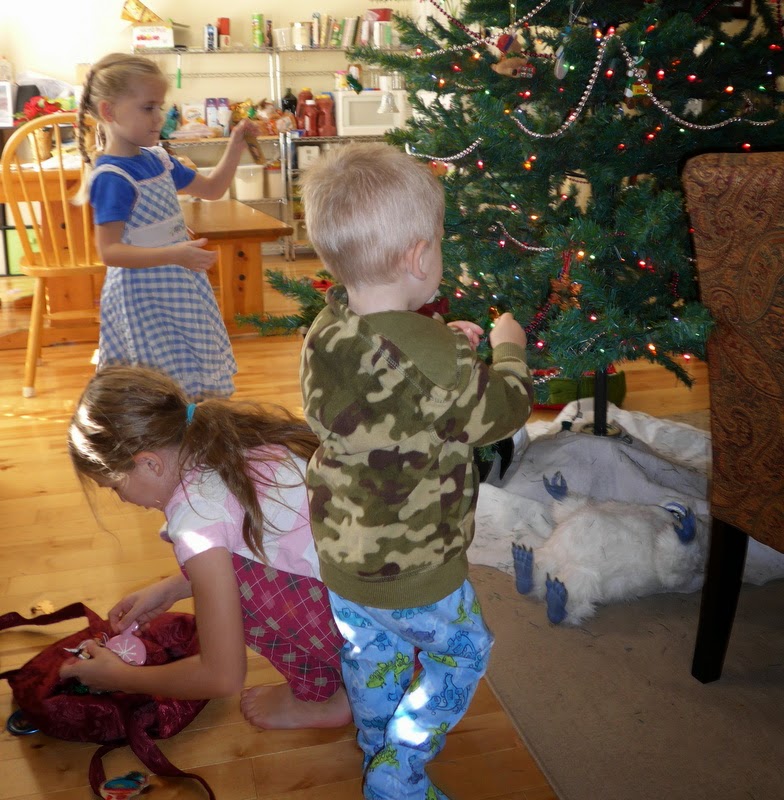 Now it's December and I'm not ready for Christmas at all. Miriam wants to do "the twelve days of Christmas" which in translation means she wants to start the advent calendar. I haven't even gotten those out of our boxes yet! I guess I'll have to do that today...and only stuff them for 16–18 days?

I haven't decided much at all. I have two weeks to get things figured out. *sigh*
Posted by Nancy at 9:59 PM