First day at the pool

We walked to the pool after having lunch since Daddy and Rachel were off at soccer. Miriam was rather excited to go swimming and chattered the whole time about all the things she was going to do. 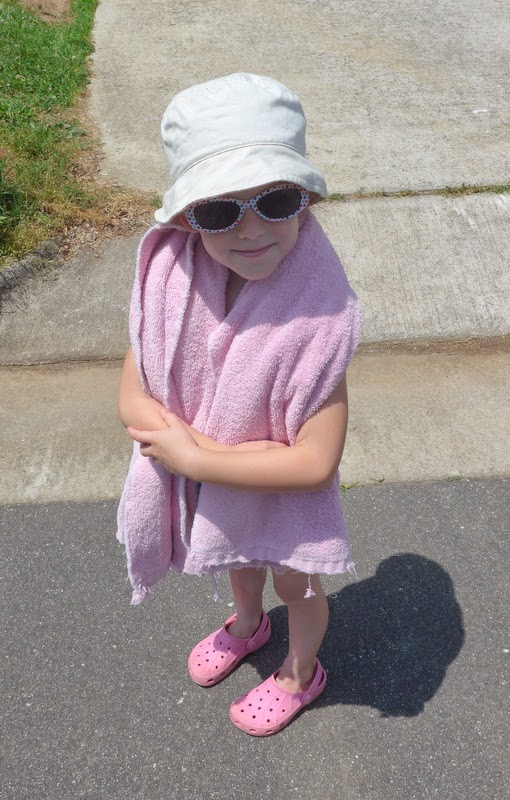 When it actually came time to get into the pool, however, the water was a little cooler than she had been expecting. 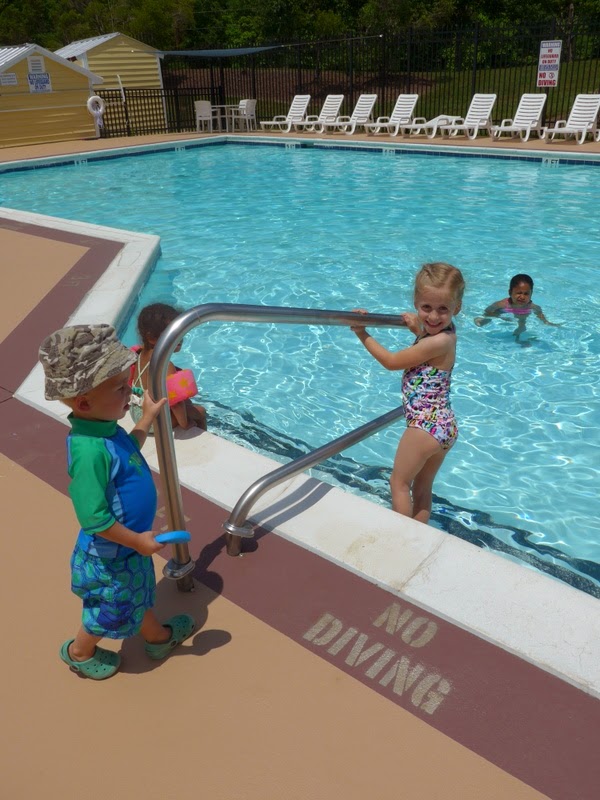 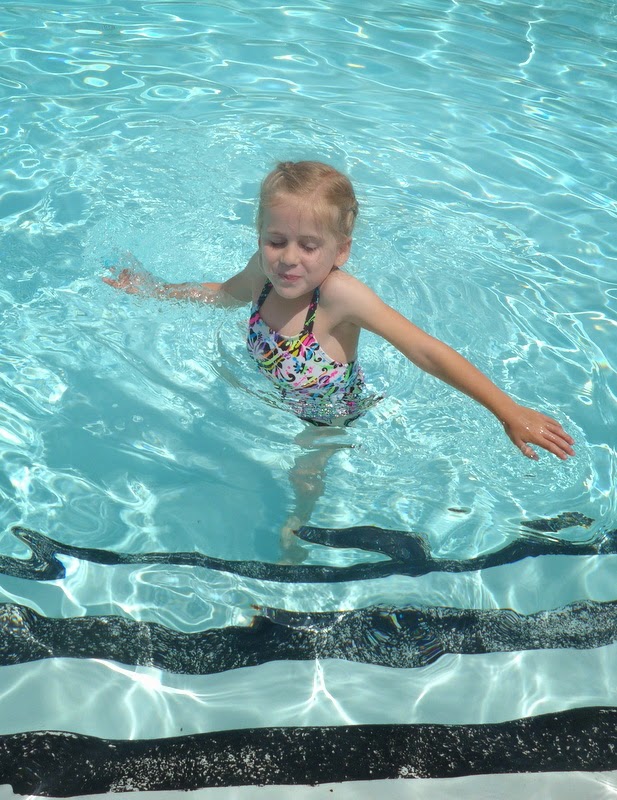 She wisely decided that it would be best to take the plunge all at once rather than wading in slowly: 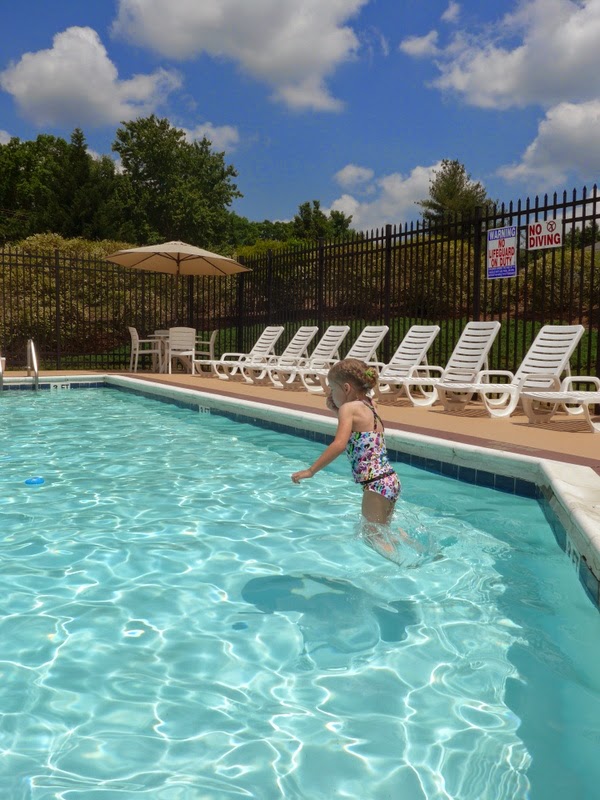 And, boy, was it cold! (Though not so bad once you got used to it). 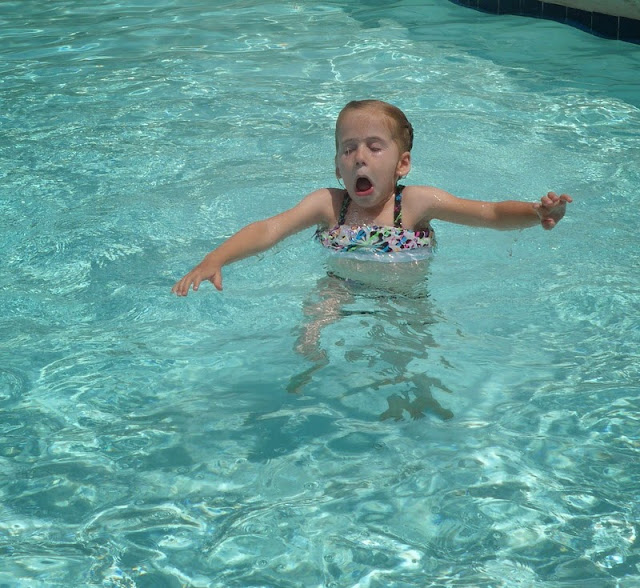 Benjamin was rather brave on the stairs but wasn't keen on the idea of leaving them unless I was carrying him. He turned down any offer of a flotation device (even the Puddle Jumper, which he wore last year) with a quick, "No, sanks!" 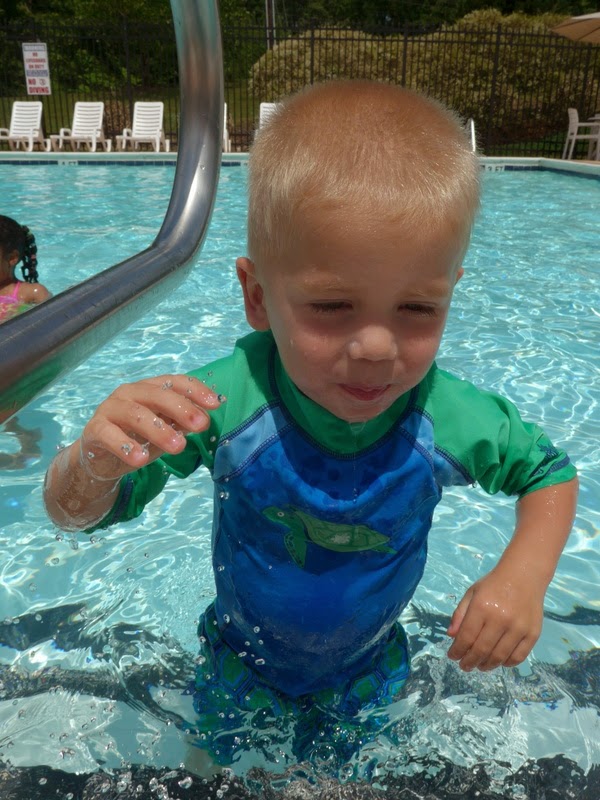 When the kids got cold enough that all they wanted to do was sit in their towels in the sun I took the opportunity to swim a few laps before taking them to the baby pool, which is usually quite a bit warmer than the big pool (and today was no disappointment—it was quite warm). Benjamin was much happier in there. "This nice baby pool!" he kept saying. 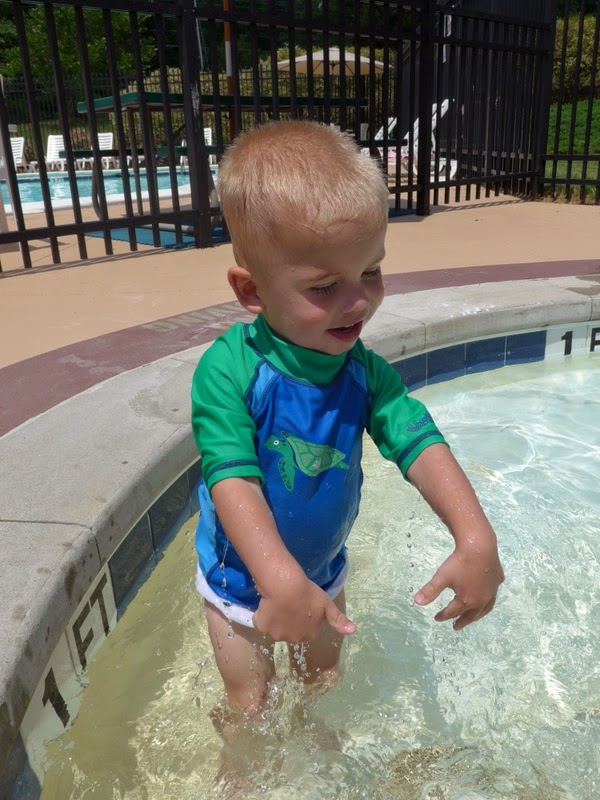 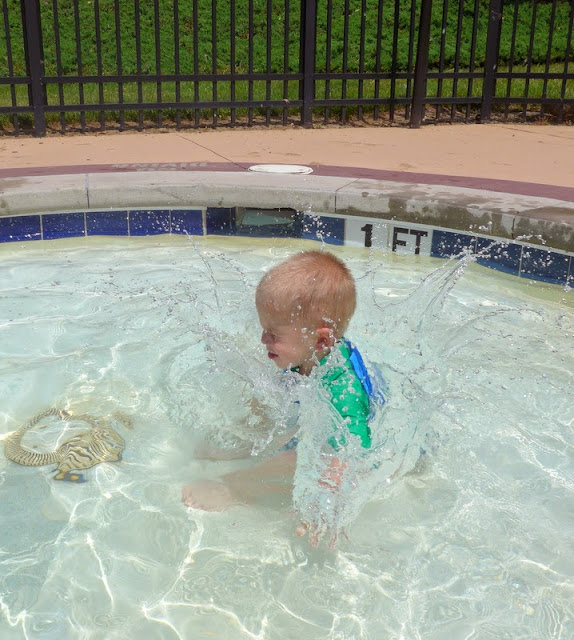 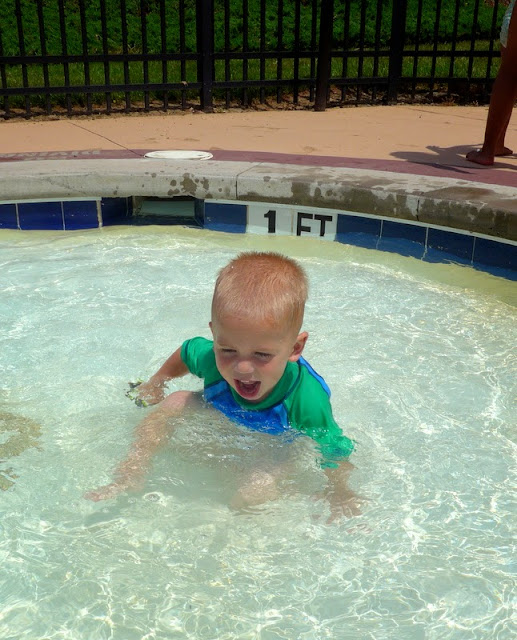 He also kept saying how warm the "augy" was. I hope he never learns how to say water correctly because augy is just too much fun to listen to. He has an augy bottle, he loves to eat augy-melon (which we had for dinner), he likes to help augy the garden (because augy is also a verb, of course). My personal favourite, however, is augy-gator, which is what he calls alligators for whatever reason.

Miriam also enjoyed warming up but soon got bored and wanted to return to the big pool. 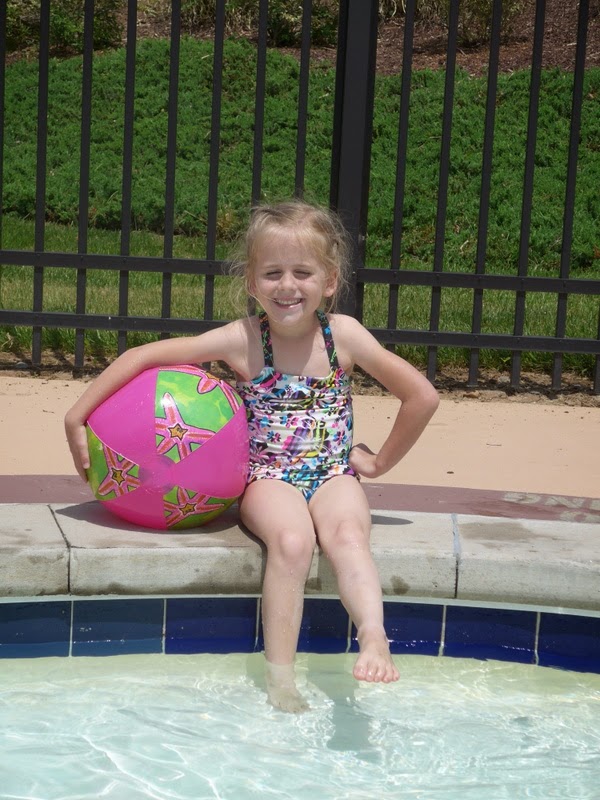 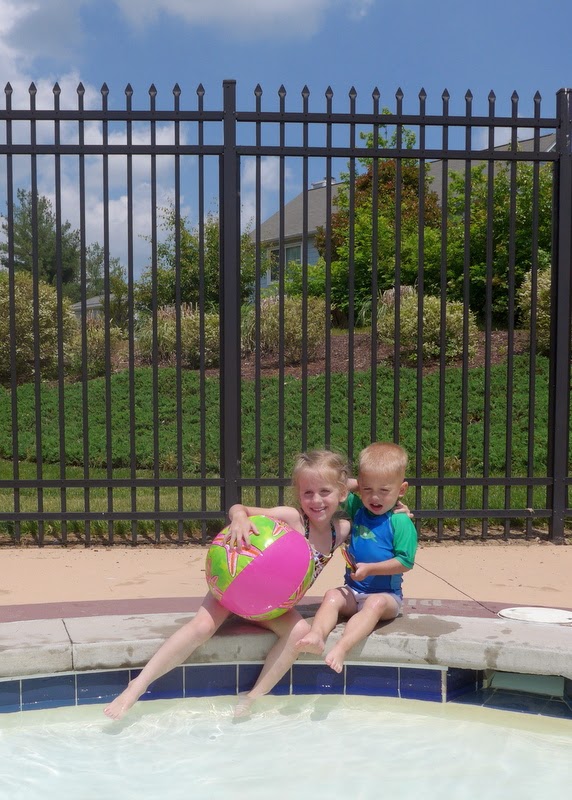 Instead I let her take pictures of me (I'm so gracious). Many of them didn't turn out, but this one was okay: 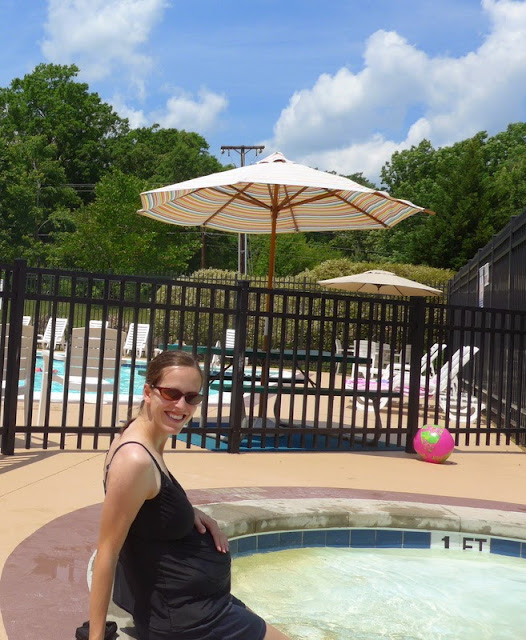 Look! I'm finally wearing the swim shorts I got three years ago so that I could have something to wear for the mom'n'me swim class I signed up to do with Miriam before Benjamin was born. Instead he was born the day before our swimming session started so Grandpa ended up taking Miriam to the mom'n'me swim class instead (and I never once wore the shorts).

Rachel and Andrew joined us when they were finished with soccer and they were hot and sweaty so were quite happy to jump into the cold pool. Rachel was worried about whether or not she'd remember how to swim so Andrew told her to just jump into the deep end and see what happens. 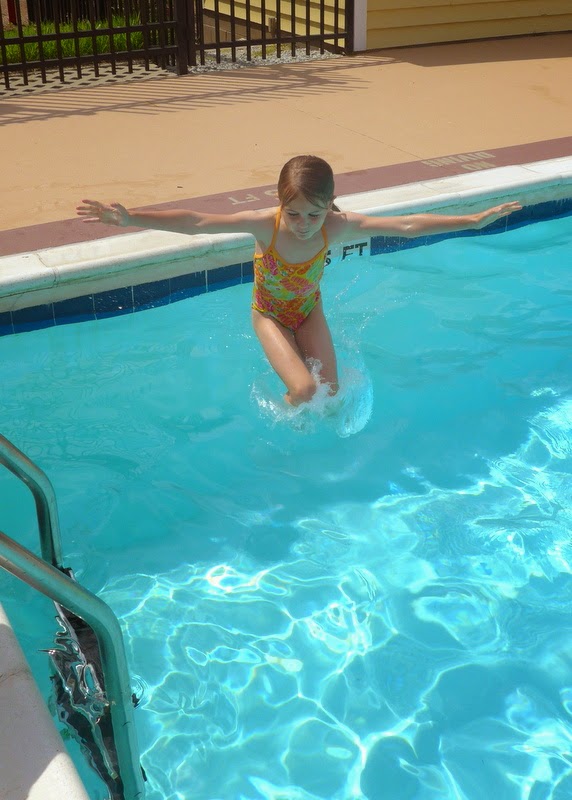 Turns out she remembered how to swim! 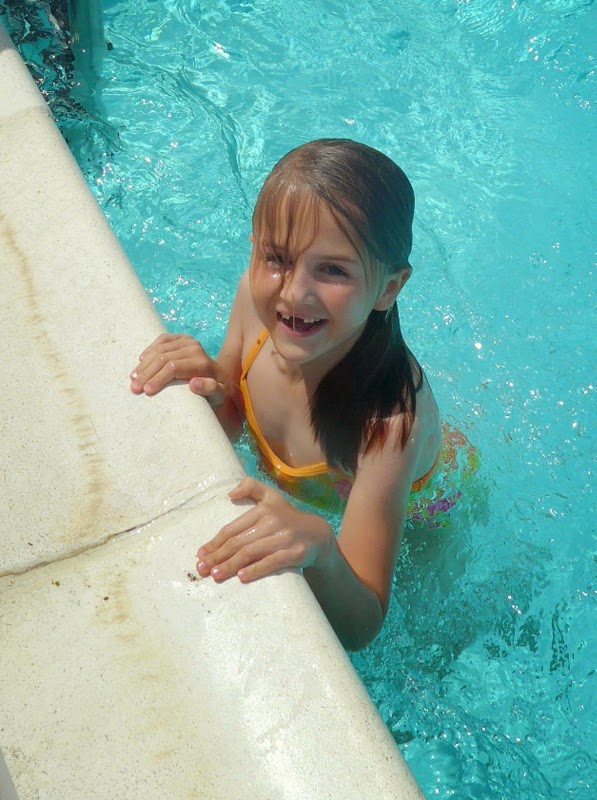 And here's some photographic evidence that my little ones always get along and never do anything mean to each other of Miriam putting her foot over Rachel's head so she can't climb up the ladder: 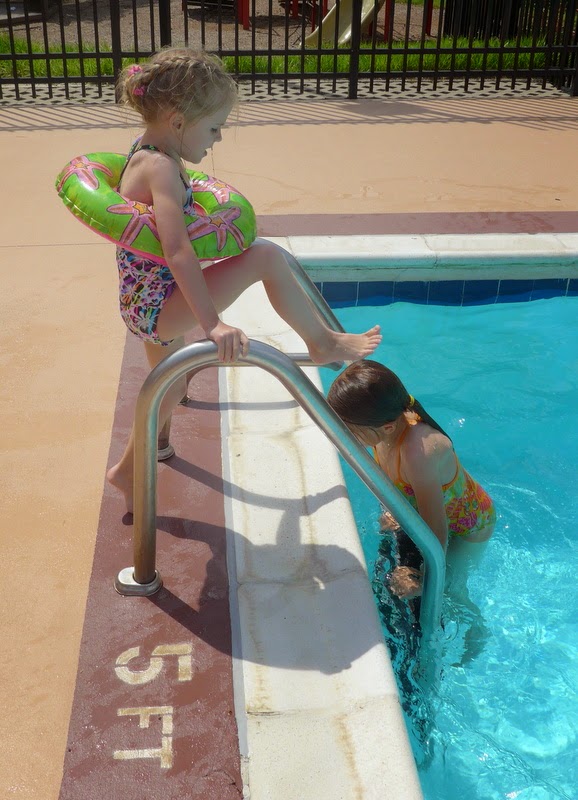 Andrew forced Benjamin into the Puddle Jumper. He wasn't a fan (and pulled it off the minute he got on the deck) but didn't entirely freak out either. 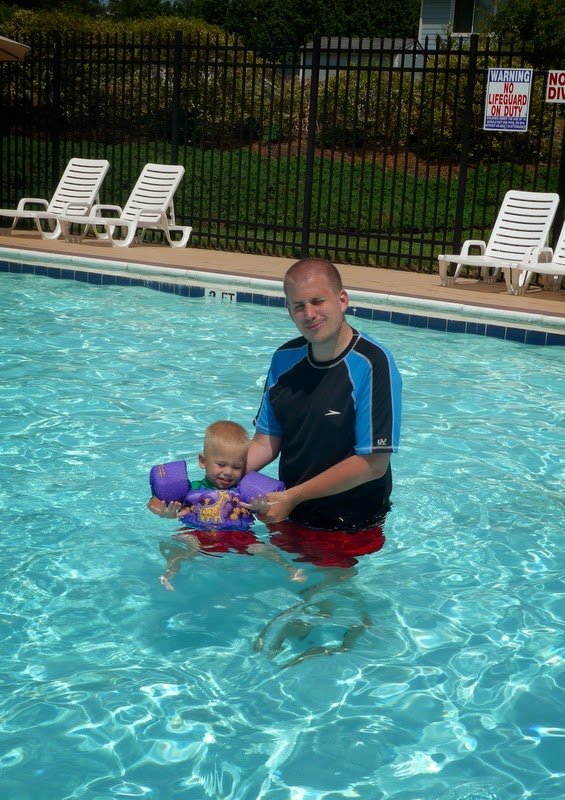 Here I am doing a back float, which isn't at all as comfortable as swimming on my front while this far along: 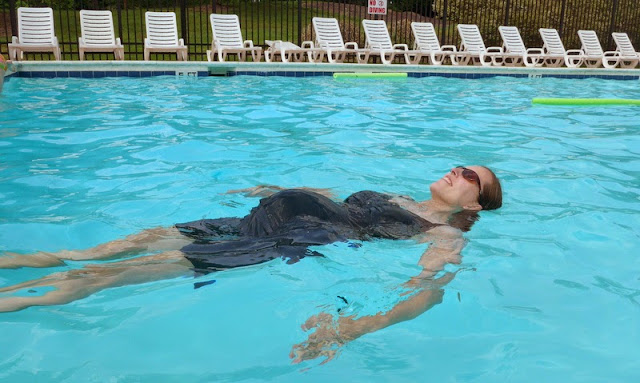 And here we are taking a minute to warm up in the baby pool again before heading to the showers: 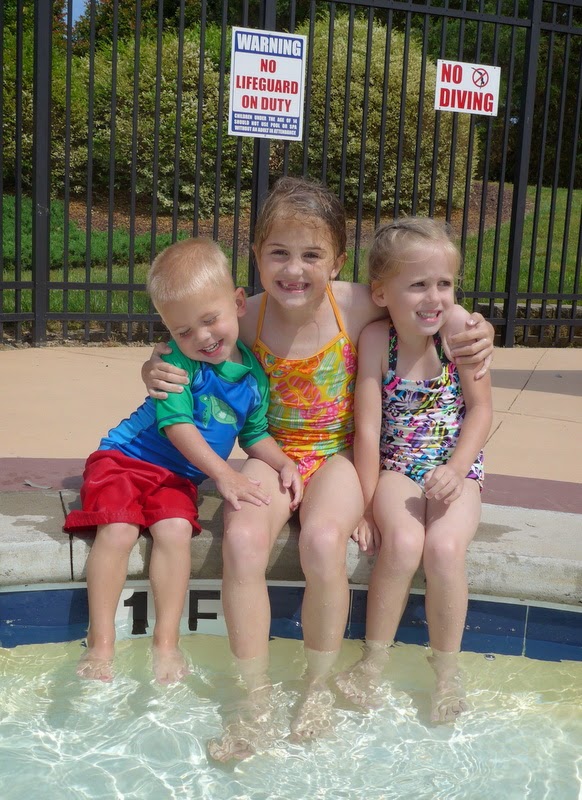 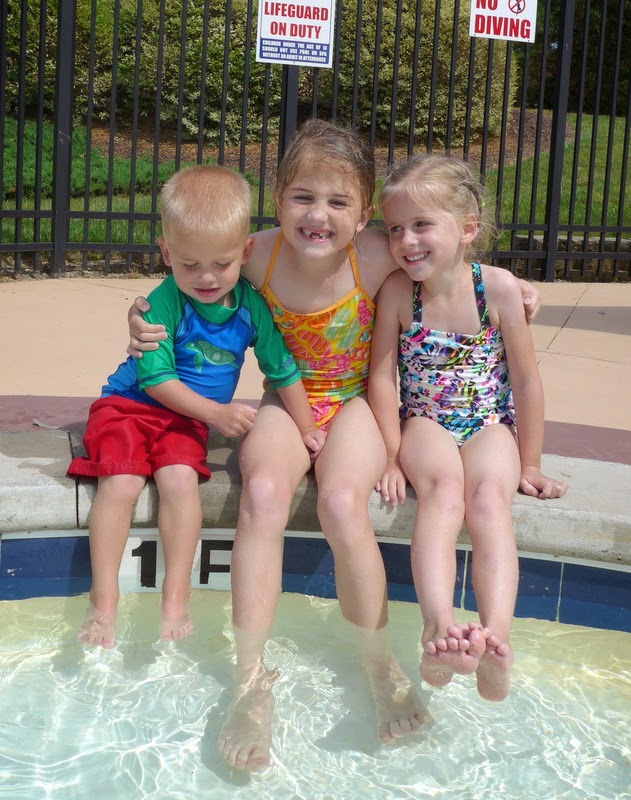 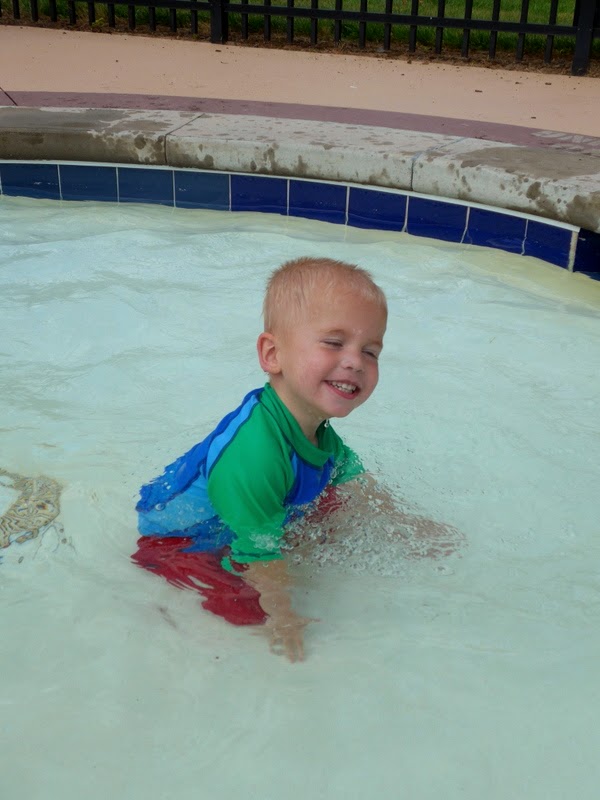 We decided Miriam's hair looked like mermaid hair when we took her braids out—all wet and wavy like that. 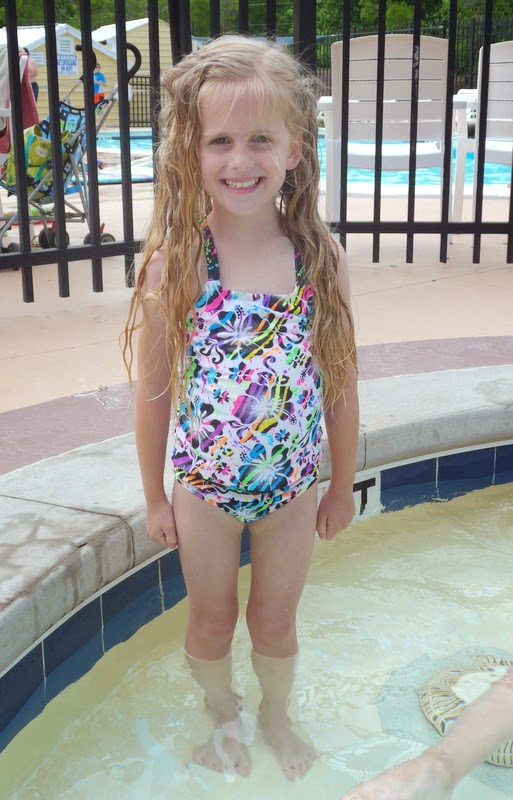 I showered all the kids and then we went home to get dinner ready so we could get to the church for the YW fundraiser. I signed up to donate a dessert for the silent auction, so we had to drop that off, but then we just...left.

We felt a little guilty but all three of our kids were completely worn out from a full day of soccer and swimming. They were slightly sunburned and extremely mopey and Andrew and I were tired as well and didn't feel like putting forth the effort involved in A) socializing with others and B) making sure our grumpy children were socializing with others acceptably. Introversion won tonight and I'm really okay with that.
Posted by Nancy at 9:37 PM