My grandma passed away this morning at 7:00 MST so I've spent the morning calling my siblings, chatting with my great-uncle, feeding my children, remembering and writing.

My grandma grew up in Hosford, Florida. Here's a picture of my grandma (the girl in the dark dress) with her four brothers and her parents:

(I think my cousin Shannon looks a lot like our great-grandmother. But anyway...)


My Uncle Tom (the one on the tricycle) says this picture is very valuable—not to society at large, perhaps, but to our family—because it's the only picture of their whole family together. The house in the photo belonged to my Grandma's great-great aunt Florence Louisa Duggar and her husband, Elias Rudd (pictured on the far right of the photograph). They lived in Quincy, Florida.

The house is on stilts because of the high water table in the area—flooding was common. Their own house was built in a similar manner. My grandma remembers many squalling storms frightening her as a child. She was afraid of the dark so her mom would let her sleep with the light on, which annoyed everyone. Eventually the missionaries gave my grandma a blessing that she'd no longer be afraid, and, she told me, she wasn't! She was able to sleep in the dark, much to the relief of her older brothers.

It was probably her brothers that caused much of the fear of the dark, in all honesty. From what Grandma has told me they were always pestering her with spiders and snakes and things. She says she remembers her brothers picking up snakes, twirling them in the air above their heads, and launching them in her direction. Pesky brothers!

The family was rather poor—you can see that Uncle Tom has no shoes on in this picture; he says that's because he didn't have any. My grandma says that squirrel was often on the menu—her older brothers would hunt squirrels, which Mary Gladys O'Neal would magically turn into a meal.

My grandma's father passed away on August 31, 1941. I've been chatting with my Uncle Tom about it this morning and this is what he told me:


He had been drinking that Sunday morning and insisted on driving to town to buy more whiskey. We lived 8 miles from [the] nearest town. My mother and older siblings were trying to convince him not to go. In fact, there was a physical wrestling match to try to hold him down so he could not leave. My sister, Evon, and I were instructed to run to my grandmother's place to get help from some of the men living there. One cousin was there but took his time to finish eating breakfast before he would come to our home to help. He arrived too late and my father had already driven away in his old car.

Not too long after someone drove to our place and informed us he had been in an automobile accident, being thrown through the roof of the car, which broke his neck. The old cars had more or less a wooden frame covered with cloth in those days.

He was taken by [the] people that found him along the highway to the hospital in Quincy, Florida, which was about 20 miles away, as I recall. All of us kids visited him for short time in the hospital room. I only remember hearing him say, "I can not breathe" then we younger ones were taken to an aunt's home in Quincy. My mother came there about 10 pm that night to let us know Dad had died.

Interestingly enough, my Grandpa's mother (Erma Catharine Nunn) was also killed in an automobile accident—she was struck by a drunk driver in 1937. Anyway, I also asked my uncle about how their family joined the church. He said:


Many of my relatives had been baptized by missionaries that came through the area occasionally but none of them were ever active in the church, except my mom.  She seemed to be totally converted from the very beginning and never wavered in her testimony.  Many church meetings were held in our home when the missionaries came through, with my Dad always staying outside and not coming in.  The lifestyle of most all of the family in that area was drinking, smoking, dipping snuff and never considering any of the gospel message.  My mother was the only strong one and as a young boy I decided her way of life was much better than what I witnessed with other relatives, which caused me to remain active in church all of my life.

After her husband's death, Gladys packed the kids up and moved them to Utah. I need to get more details on how the move went. I remember my grandma talking about driving across the country with her mom. And I remember that she wasn't very happy about the move, but eventually she met a boy and that made life a little easier.

I need to interview my great-aunt Wanda about this—she helped those two elope!

My grandma was a little bit older than my grandpa and when they were trying to get a marriage license the official asked for proof of age. My grandma easily supplied her proof, but my grandpa couldn't prove his age, so his twin sister stepped up and said, "Well, I'm his twin. I'll vouch for his age!" 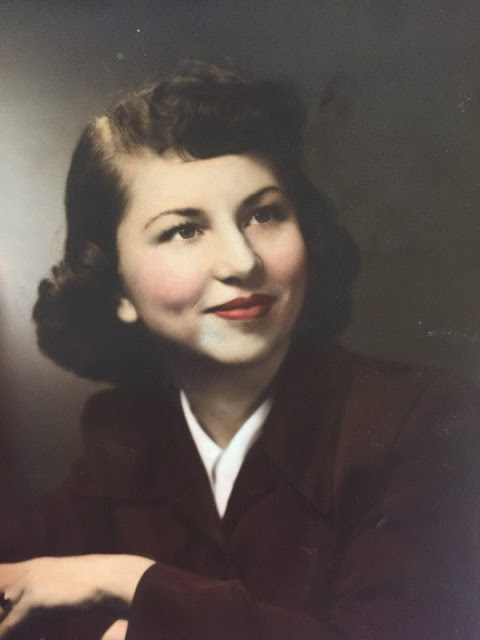 (I think my nephew Matthew resembles my grandma, but anyway...)

Apparently that little trick was convincing enough and they got married and started a life of hard work. My grandma once mentioned that when they were dating my grandpa would always fall asleep with his head on her lap--they'd go out and then would come home and my grandpa would park the truck, they'd start talking, and he'd fall right asleep. He was always working more than one job!

They had five little boys, right in a row, and those five little boys were a lot of work! They were mischievous and energetic, always running around wild and getting into trouble! My hat's off to her for sticking around to raise them all! I'm sure she was relieved when my Aunt Tami was born. Finally another girl in the house! (Not that it did much to balance stuff out when Uncle Cory was born...) 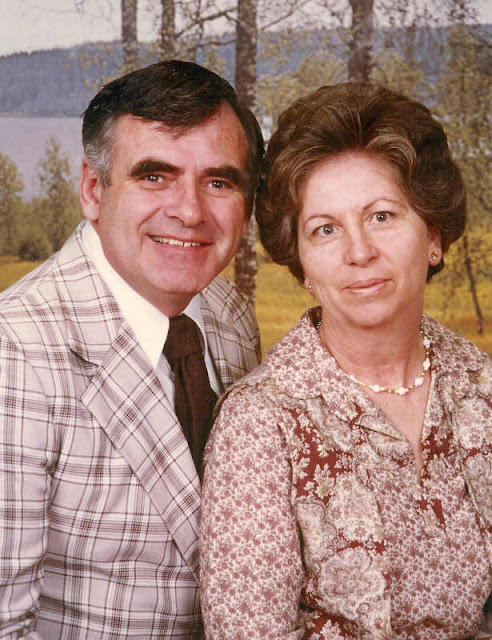 I suppose I'll leave tales of raising her children for her children to share and will say a little of what I remember of my grandma. When I was young my family didn't live near either set of grandparents. It felt, to me, that they lived in a far-off, fairy-tale land: Utah. It was on the other side of the mountains. It was in another country. It was so far away.

I'd seen pictures of my grandparents. I'd talked to them on the phone a few times. And my grandma always sent me a pretty, frilly dress for Christmas. Yet they remained almost make-believe in my mind. Who were these mythical people called grandparents?

Eventually I became more cognizant of grandparents. We made a few trips to Utah to see them—in our big, ugly orange van—and they even came out to see us in British Columbia. And I pouted when they left, so surely I enjoyed their visit even if I don't remember much of it now.

I remember visiting Utah several times during my growing up years.

My grandma worked in the state capitol building for several years. She gave us a tour once and I specifically remember her pointing out the place on the floor where the marble looks like the profile of Queen Elizabeth.

I remember looking at all the trinkets she had in her glass-doored cabinets.

I remember my mom buying super-soakers and street hockey sets for us to play with in her yard because for some unexplainable reason we were never allowed to play with anything inside the house. Including the games in the games closet. Weird, right?

I remember playing on the loft while the grown ups chatted and watched television.

I remember being terrified to use the bathroom in the basement (after they moved downstairs) because of the black widow that lived in the window well.

I remember walking around Temple Square and going to see Legacy and visiting the B&K Drywall office, before it was moved to their basement.

I remember visiting after my sister Kelli moved in to live with them. She said she loved it because you could do anything you wanted at their house. If you wanted a snack at 10 PM you could have a snack at 10 PM. I thought that was amazing and asked her to prove it. So we went to the kitchen and had yogurt. After bedtime! Amazing!

I remember showing up for a visit and suddenly being taller than my grandma. Not that it was that much of an accomplishment, but it was still somewhat shocking for me.

I remember my grandma and grandpa coming to visit us in High River. We went for a walk near the Highwood River (at George Lane Park) and stumbled into an old car show, which made my grandpa very happy. They used to own an old blue car, which my grandpa was very proud of.

I remember helping prepare big batches of Grandma's cream style corn: husking and grating ear after ear. I remember pots of salsa simmering on the stove. I remember okra and turnip greens and cornbread stuffing and watching grandma throw handfuls of salt on a pot roast. I remember grits. And capri sun.

I remember doing a swing routine with David for Grandma and Grandpa's 50th wedding anniversary.

I remember that after Grandpa died Grandma missed him so much. She told me that when they were courting he would sometimes walk down the street calling her name. She said that sometimes, in her dreams, she could still hear him calling for her.

Today I'm glad she followed his voice. She was tired of living, both in body and in spirit, and was happy to go home to his arms.

Uncle Tom said he was able to visit Grandma last night before she passed and "could see she was ready." He said that from what he observed her passing "was quite peaceful. The nurse was there to give her additional medication and I could not observe any pain at that time, which I am grateful for."

Tom is 82 years old and told me, "Today I am very aware I am the last leaf on the tree of my direct family and it is getting a little shaky on that tree."

I remember when my Grandma Conrad was in his shoes. It was really difficult for her. How hard, but how special, to be the last one left in your generation. I certainly find myself turning to Uncle Tom to find out as much information as I can about their family while we still have him around! Who'd have imagined that shoeless little boy on the tricycle would one day be responsible for filling in all the family history gaps—what big shoes to fill!
Posted by Nancy at 2:19 PM