This is the earliest I've gotten this done since 2010 (and the second earliest ever). Evidently December has been busy the past five-or-so years. This year is no exception to that, though, so I don't know how I managed to pull this together this early. It's nice to have it out of the way, though!

A note (or two) on the artwork: The background is a photograph of some of the marbled paper that we made back in June. Miriam drew the rose on the first page during sacrament meeting a few weeks ago. Rachel drew the lighthouse on the second page—it's actually from the picture that was sent to the state fair. The wreath on the last page is the nature ring Benjamin and I worked on together the beginning of this month, with a watercolour filter of sorts. The "washi tape" patterns are from vecteezy.com.

You can download a PDF of the newsletter here. The text-only version is below the jump. 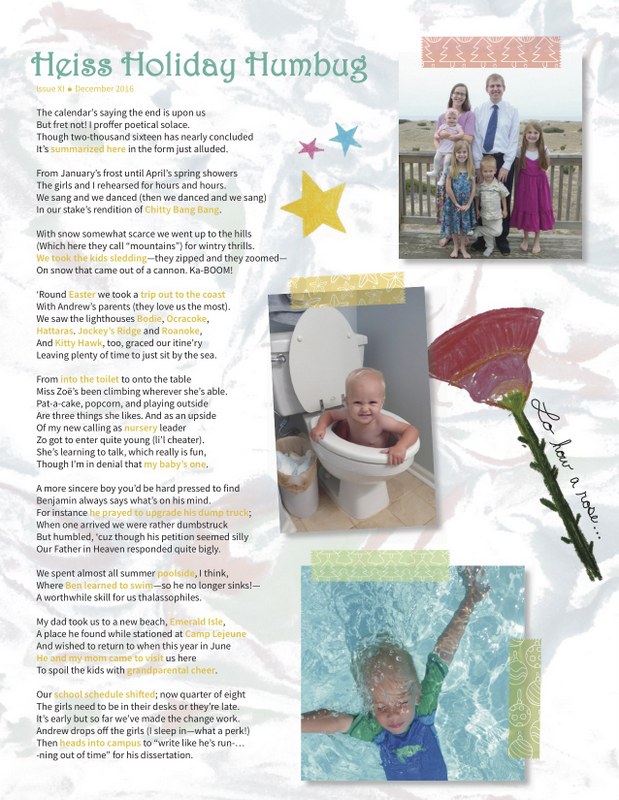 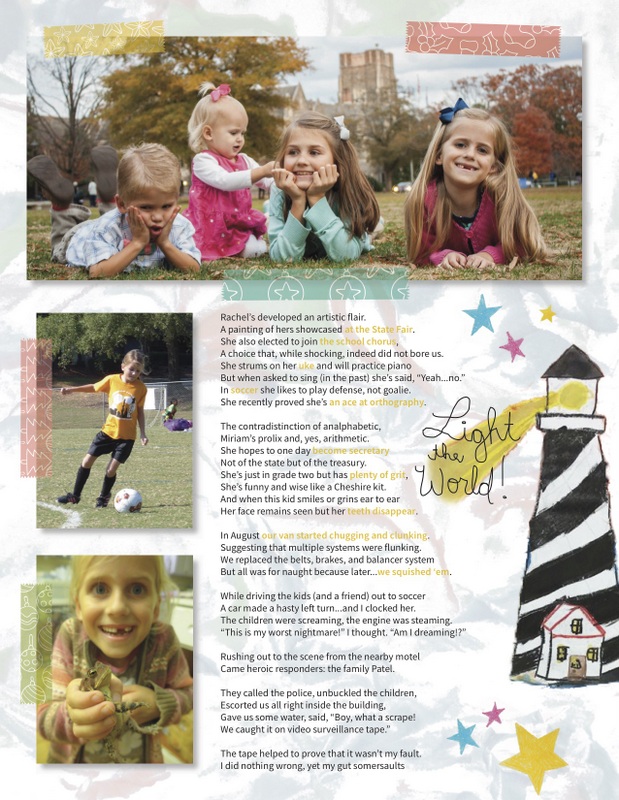 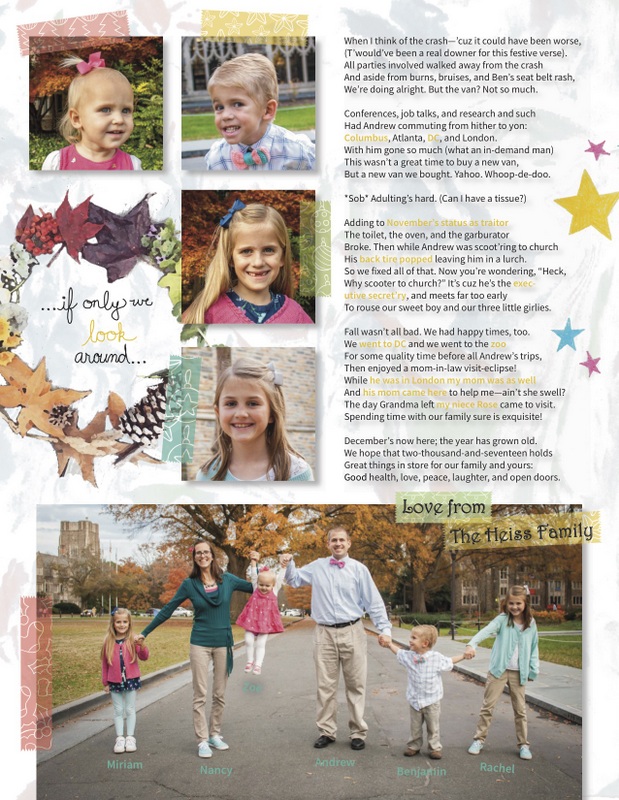 The calendar’s saying the end is upon us
But fret not! I proffer poetical solace.
Though two-thousand sixteen has nearly concluded
It’s summarized here in the form just alluded.

From January’s frost until April’s spring showers
The girls and I rehearsed for hours and hours.
We sang and we danced (then we danced and we sang)
In our stake’s rendition of Chitty Bang Bang.

With snow somewhat scarce we went up to the hills
(Which here they call “mountains”) for wintry thrills.
We took the kids sledding—they zipped and they zoomed—
On snow that came out of a cannon. Ka-BOOM!

‘Round Easter we took a trip out to the coast
With Andrew’s parents (they love us the most).
We saw the lighthouses Bodie, Ocracoke,
Hattaras. Jockey’s Ridge and Roanoke,
And Kitty Hawk, too, graced our itine’ry
Leaving plenty of time to just sit by the sea.

From into the toilet to onto the table
Miss Zoë’s been climbing wherever she’s able.
Pat-a-cake, popcorn, and playing outside
Are three things she likes. And as an upside
Of my new calling as nursery leader
Zo got to enter quite young (li’l cheater).
She’s learning to talk, which really is fun,
Though I’m in denial that my baby’s one.

A more sincere boy you’d be hard pressed to find
Benjamin always says what’s on his mind.
For instance he prayed to upgrade his dump truck;
When one arrived we were rather dumbstruck
But humbled, ‘cuz though his petition seemed silly
Our Father in Heaven responded quite bigly.

We spent almost all summer poolside, I think,
Where Ben learned to swim—so he no longer sinks!—
A worthwhile skill for us thalassophiles.

My dad took us to a new beach, Emerald Isle,
A place he found while stationed at Camp Lejeune
And wished to return to when this year in June
He and my mom came to visit us here
To spoil the kids with grandparental cheer.

Our school schedule shifted; now quarter of eight
The girls need to be in their desks or they’re late.
It’s early but so far we’ve made the change work.
Andrew drops off the girls (I sleep in—what a perk!)
Then heads into campus to “write like he’s run-…
-ning out of time” for his dissertation.

Rachel’s developed an artistic flair.
A painting of hers showcased at the State Fair.
She also elected to join the school chorus,
A choice that, while shocking, indeed did not bore us.
She strums on her uke and will practice piano
But when asked to sing (in the past) she’s said, “Yeah...no.”
In soccer she likes to play defense, not goalie.
She recently proved she’s an ace at orthography.

The contradistinction of analphabetic,
Miriam’s prolix and, yes, arithmetic.
She hopes to one day become secretary
Not of the state but of the treasury.
She’s just in grade two but has plenty of grit,
She’s funny and wise like a Cheshire kit.
And when this kid smiles or grins ear to ear
Her face remains seen but her teeth disappear.

In August our van started chugging and clunking.
Suggesting that multiple systems were flunking.
We replaced the belts, brakes, and balancer system
But all was for naught because later...we squished ‘em.

While driving the kids (and a friend) out to soccer
A car made a hasty left turn...and I clocked her.
The children were screaming, the engine was steaming.
“This is my worst nightmare!” I thought. “Am I dreaming!?”

Rushing out to the scene from the nearby motel
Came heroic responders: the family Patel.

They called the police, unbuckled the children,
Escorted us all right inside the building,
Gave us some water, said, “Boy, what a scrape!
We caught it on video surveillance tape.”

The tape helped to prove that it wasn’t my fault.
I did nothing wrong, yet my gut somersaults
When I think of the crash—’cuz it could have been worse,
(T’would’ve been a real downer for this festive verse).
All parties involved walked away from the crash
And aside from burns, bruises, and Ben’s seat belt rash,
We’re doing alright. But the van? Not so much.

Conferences, job talks, and research and such
Had Andrew commuting from hither to yon:
Columbus, Atlanta, DC, and London.
With him gone so much (what an in-demand man)
This wasn’t a great time to buy a new van,
But a new van we bought. Yahoo. Whoop-de-doo.

Adding to November’s status as traitor
The toilet, the oven, and the garburator
Broke. Then while Andrew was scoot’ring to church
His back tire popped leaving him in a lurch.
So we fixed all of that. Now you’re wondering, “Heck,
Why scooter to church?” It’s cuz he’s the exec-
utive secret’ry, and meets far too early
To rouse our sweet boy and our three little girlies.

Fall wasn’t all bad. We had happy times, too.
We went to DC and we went to the zoo
For some quality time before all Andrew’s trips,
Then enjoyed a mom-in-law visit-eclipse!
While he was in London my mom was as well
And his mom came here to help me—ain’t she swell?
The day Grandma left my niece Rose came to visit.
Spending time with our family sure is exquisite!

December’s now here; the year has grown old.
We hope that two-thousand-and-seventeen holds
Great things in store for our family and yours:
Good health, love, peace, laughter, and open doors.
Posted by Nancy at 11:47 PM