Today was our double-whammy celebration of Miriam's baptism and Alexander's blessing and, continuing with the theme of our life recently, it sure was a whirlwind of a day!

After convincing Andrew that making crepes for a party of 30 people would be altogether too much work for Friday evening, we decided on simple things like muffins and cookies from Costco and soup. Andrew wasn't entirely on board with the soup because he thought it was too early in the day for soup and this was going to be a brunch-type thing, but I pointed out that (a) it's fall so soup is a totally rational meal choice and (b) 11:30 is close enough to actual lunch that having soup wouldn't be frowned upon. Plus, Wikipedia categorizes soup as a brunch food...so it's basically official.

Then, after convincing Andrew that we would certainly not have time to prepare everything in the morning (we have five kids to get ready—FIVE!), we stayed up late making soup, cutting up fruit, and deciding which tray would hold what food. This was a very good thing because the morning ended up being quite rushed (from my perspective). I was so busy doing hair and putting clothes on people and changing diapers and bathing children and nursing and so forth that I hardly even made it downstairs before we dashed out the door.

Alexander wore the same outfit that Benjamin wore on his blessing day (I used the word "whirlwind" for his blessing day as well...huh...maybe life is just always complicated). The kids really wanted him to wear a bowtie, but all of Benjamin's bowties look ridiculously huge on him so Rachel dug out a red hair bow and we clipped that on his shirt, completing his dapper look: 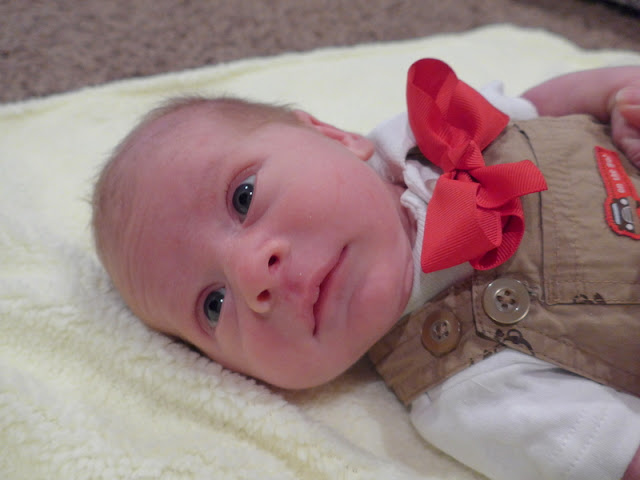 We had to get to the church early to get a jumpsuit for Miriam, which she was not excited about wearing. She kept asking, "Are you sure I'm supposed to wear this the whole time?" She, naturally, wanted to stay in her pretty white dress (the same one that Rachel wore on her baptism day). 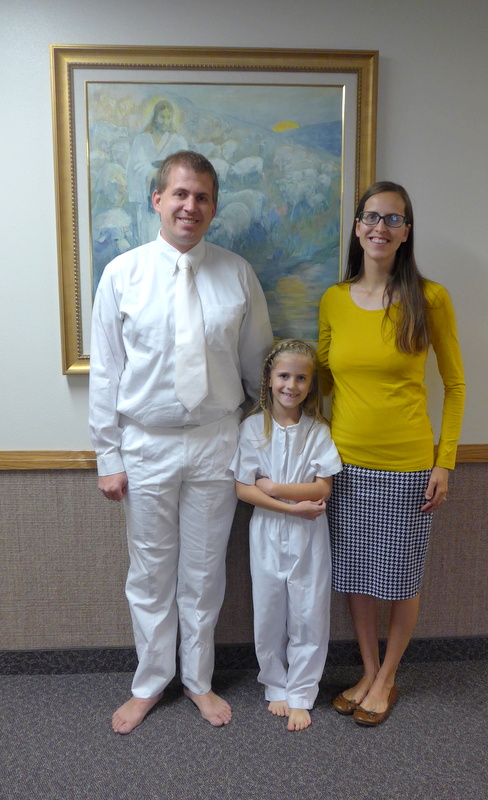 Because we live in Utah now and there are a billion kids in our ward (almost), we shared Miriam's baptism day with a little boy in her church class (whose birthday is actually today). We picked out people for the second half of the program and the other family picked out people for the first half. Rachel was not entirely pleased when Miriam asked her to give the closing prayer, but she felt much better about things when we got there and she found out that her friend Kate would be giving the opening prayer. (Kate is the older sister of the little boy getting baptized).

Grandpa wasn't entirely pleased when Miriam asked him to give a talk on the Holy Ghost (though much of his apparent displeasure was simply to tease her) and did not seem to feel much better about things when we got there and found out that a grandpa of the other little boy would be giving the talk on baptism...

Both talks were great, though I should have taken notes because my brain is like a sieve these days. The part that sticks out in my mind from the first talk was when the grandpa read Mosiah 9:8–11 and talked with the kids about what mourning with others and standing as a witness of God really means.

Our grandpa told a story of his own baptism and how his primary president gave a talk about the Holy Ghost and had a present up on the stand with her so Grandpa could hardly pay attention to what was being said because he was so busy wondering what was inside the box—because surely it was a present for him! But when she opened the box it contained only a pearl necklace (not hot wheels, which was super lame) and obviously wasn't a present for him but was only an example (a super lame example) of what a present might be.

The Holy Ghost, on the other hand, is a great gift because it's a constant companion for us. Grandpa told a story illustrating this point and then gave each of the kids a "Holy Ghost Scorecard" notepad, where they can write a question down and then write down promptings they get about that question to help them learn how the Holy Ghost speaks to them.

The baptism itself went smoothly. Miriam kept saying, "I can't believe I'm baptized now!" while I was helping her get dressed. I hope that she always feels that same excitement over her relationship with the Saviour.

I checked in with our presiding bishopric member about Alexander's blessing prior to Miriam's baptism, which was a good thing because he didn't know about it (though he said he'd be happy to stick around to officiate (and we really did get permission from the bishop)). There were so many miscommunications about this day (the primary hadn't updated their list so they had no idea Miriam was turning eight, for example) that I'm surprised we got it all pulled together. But everything worked out (phew). 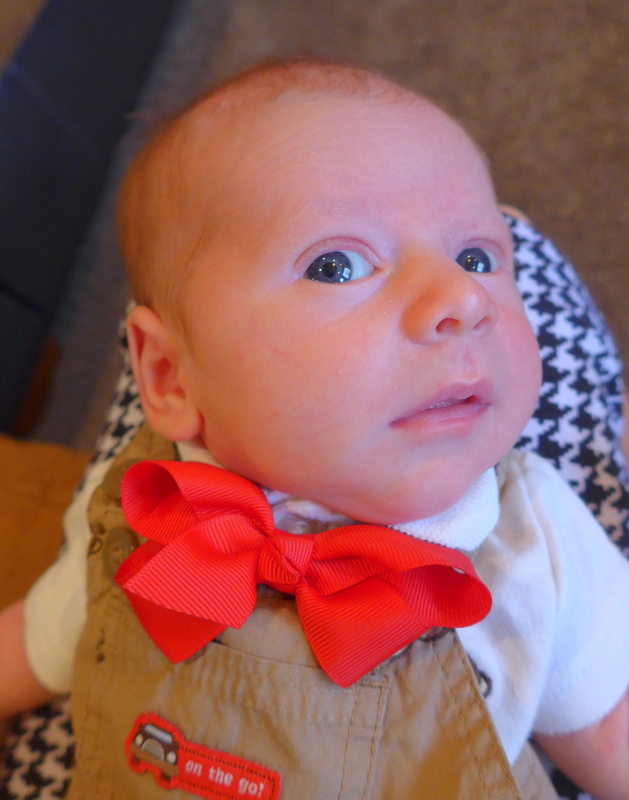 Alexander got a little fussy during his blessing, but in his defence it had been quite a busy morning and by the time we got around to blessing him it was about time for him to eat again.

(Andrew just remarked that "He's like clockwork!" because my milk started letting down a couple of minutes ago (which at this point can still be quite painful...so I complained about it...which is why Andrew knew) and I said, "He'll probably be waking up in a few minutes," and then a few minutes later Alexander started grunting and groaning in his bassinet—like clockwork).

I didn't take many pictures of the day. There was too much visiting to be done and, frankly, things were too crowded for good picture-taking (unlike our summer babies where we have the option of gathering outside), but I did make sure to get a few pictures of Miriam and Alexander together. 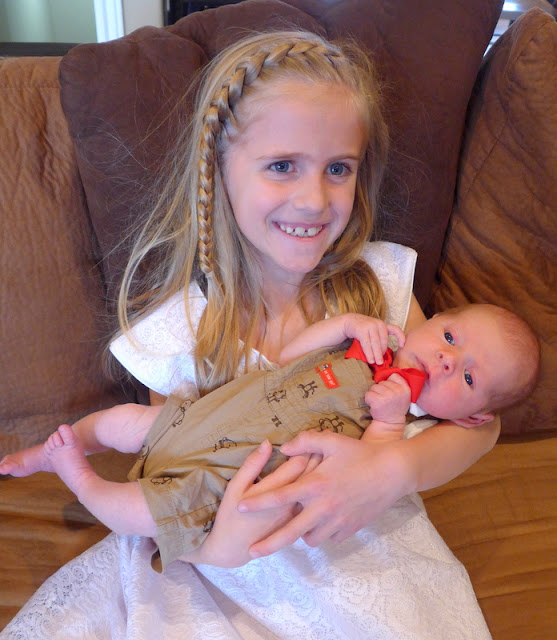 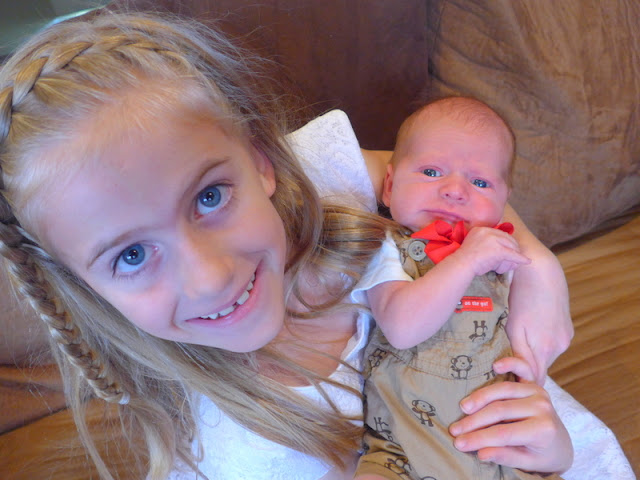 I also got this adorable picture of Aunt Linda enjoying Alexander: 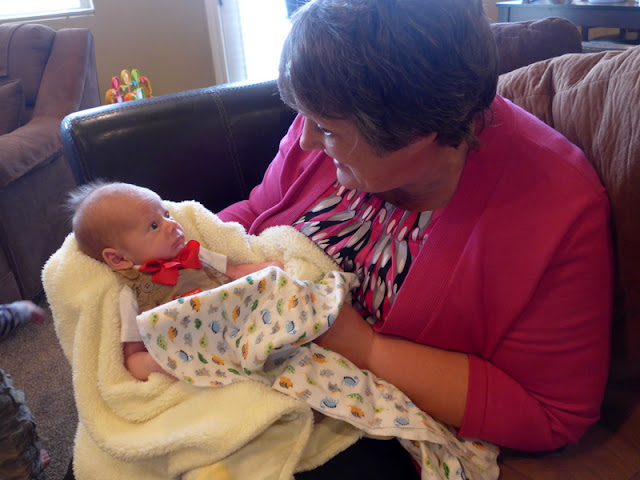 We sent out invitations to all our siblings and a few cousins and aunts and uncles and grandparents even some friends, though we probably didn't invite half the people we should have or could have. I blame baby brain for not thinking of people I should have thought to invite.

Anyway, we had nearly thirty people turn up for the baptism. My sister Kelli was running late and when Reid asked me if anyone from my side of the family was missing, my mom pointed out that Kelli wasn't there yet, so we decided to wait for a few minutes (but ultimately we didn't wait because we texted her and she was still quite a ways away). I just figured that Reid had done the attendance for Andrew's side of the family, so I didn't really even check. I just assumed everyone was there.

When we got back to the house, however, Grandma Pat and Aunt Nicki asked me where Jacob was and...I had no idea. After poking around a bit we realized that he wasn't there and never had been! I panicked at first, afraid that I'd neglected to send him an invitation, so I checked my messages to make sure that I'd sent it to him and Shayla (and I had) and then Andrew texted them to remind them.

His little family was there within a half hour, feeling rather sheepish that they'd missed both the baptism and blessing (but happy that they were in time to see the family).

Oh, and Jacob, Shayla and Carter!

It was a good day, even if these things always end up being a little crazy, and it was nice to get together with the family to visit.

After the baptism, both Miriam and the other little boy were called to the front of the room. The bishopric member asked them to look out in the crowd and tell him who they saw—their families. He said that all those family members were there to support them—and that's cool! And now they need to make sure that they are there to support their families as well (now that they've reached the age of accountability and everything).

And it is rather cool that so many family members were there to support her—whether they like the church or not—they were there. And that is cool.

So while I do think, as our little instruction sheet reminded us, that the baptism is the most important part of the day and any other celebration should be simple (like soup instead of crepes, just saying), having an excuse to bring the family together is a wonderful thing as well.

Families are a tricky business.

I was just talking to a friend this evening about how we feel about living in Utah again. I told her that it's both super great and super overwhelming to be around so much family again. Like, the drama, you guys—yikes! Could we just...simmer down?

Her family is mostly in Nigeria (her parents immigrated here and she was raised—on hockey skates—in Minnesota) so she said that she and her siblings have been unaffected by extended family drama for the most part.

So thanks for coming out, family! Thanks for being civil through divorces, for swallowing your pride time and again, for patching things up, for ignoring fresh grievances, for trying to find common ground, and for showing up to support us.

We're glad you're our tribe (even if we get on each other's nerves every now and again).
Posted by Nancy at 1:50 AM