Alexander has been pining after my attention the past little while. It's true that I've been a little busier than usual, especially this past week, but it's not like I never do anything with him! I've often found that if I take a break from what I'm doing and spend a little time playing with him, that he'll be satisfied and leave me alone for a little while (which makes for a much better chunk of working time than if he's sitting beside me whining the whole time I'm trying to work). This past week he's been insatiable though!
Yesterday before dinner he was hounding me about playing with him and I kept telling him that I was almost finished with the section I was working on and that he had to be patient...and then Andrew announced it was time for dinner.
So we were going around the table asking everyone what their favourite part of the day was and Alexander said, "Almost getting to play with Mommy."
It about broke my heart.
Tonight at dinner when I said that my favourite part of the day was, first of all, that when I asked Alexander to do his job, he rushed to the dishwasher and said, "I'll get all the plates first!" and quickly gathered them up, put them away, and ran back to do more! He's been such a sulky, fussy boy this week that I think he's cried about putting dishes away every other day, so it was nice to have him do his job nicely.
Side story: the other day Rachel casually reminded him that dishes were his job and he, feeling lonely and neglected (while in a house, constantly surrounded by siblings) picked up an old phone and recorded his feelings about his life.
His first video was shocking for me to watch because Alexander is usually so guarded in his speech, calling people "stupey-smart" rather than simply "stupid" and being "mean-and-nice" rather than simply "mean." He doesn't usually pick very strong language when he's angry. The other day he told Miriam that she was "garbage" and she told him that was mean so he amended his insult to be "recycling" (since that's a step up from garbage.
In this video, Alexander says, "[Unintelligible mumblings.] I don't want to listen! That's why I am being suuuuuuper mean! So I can...kill...Rachel. That way there is nothing that I have to do...the dishes."
I guess he didn't get all his feelings out in that first video, because he made a second one:
In this video he says, "[Siiiiiigh.] Rachel is not being nice. That's why I am not letting her be not nice to me. I'm being nice to her, but...nice-and-mean to her...but I don't want to be nice to her."
I don't know what possessed him to say "kill." That's not something we go around saying at our house. But perhaps he picked it up from a television show at some point—someone uttering, "I'm going to kill [whoever]!" when they simply mean they're mad at the person for doing something.
Anyway, we talked about how that's not a nice thing to say, so I'm sure he'll soften his language next time he feels like being nice-and-mean and will say something like, "I can...maim...Rachel! That way she can't make me do my dishes!"
Long story short, he doesn't like doing chores sometimes, so he's a pretty typical kid.
Now back to my favourite part of the day, which was, second of all, that I had finished writing all the parts of my project!
"You're done with your project?!" Alexander squealed.
"Well, I still have some editing to do, a few small changes to make here and there..."
"YOU'RE DONE WITH YOUR PROJECT!"
From that moment on, Alexander was full of Big Plans for our family. First on his list, a trip to the beach in Florida (one of our neighbour friends left to go to the beach in Florida and he thought this sounded like an excellent idea; he's all packed and everything (the only probably is, we have zero plans for this)! If not that, then the pool! The park! A games night—with pictionary and UNO and that one dancing game I did back in, like, May for my activity day girls at church (this was a very specific request and it took me a long time to even figure out what he meant).
We did some of his requests this evening but, alas, didn't accomplish everything on his list, which he found very disappointing (to the point of tears).
But, again, it's not like he's been entirely neglected the past few weeks. We had several pool days (one day we spent four hours at the pool), I've read to him every evening, played Race to the Treasure and Hoot, Owl, Hoot more times than you could possibly imagine, etc.
It's just never enough.
Speaking of owls, though, here's poor Spot with her head shoved into a cup. 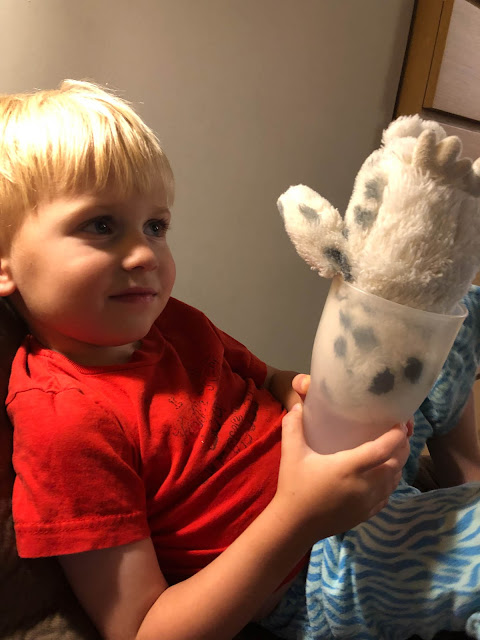 Zoë invented a game years ago, where her doll gets to eat breakfast with her. This was because she was also a lonely preschooler whose Mommy never had enough time for her (not because Mommy didn't ever spend time with her but because toddlers are incessantly demanding). She probably had it worse than Alexander, honestly, because all the big kids were off at school and she was stuck at home. So her doll got to eat breakfast with her.
She just gets out an extra bowl and sets the doll facedown in the dish.
That's it. That's the game.
She's played it for years now and Alexander has picked up on it as well.
And it's been mostly fine until a couple of weeks ago it was getting out of hand. She and Alexander were bringing armfuls of toys down for breakfast, setting out bowls for all of them, and then leaving the table full of dolls and stuffed owls facedown in every single bowl we owned.
So Andrew banned them from playing that game.
"No more dolls in bowls!" he said.
The next morning I got up and walked downstairs to find...Spot...with her head shoved into a cup.
"What's this?" I asked Alexander.
"Dad said no more dolls in bowls," he explained.
If there is a loophole, our children will find it and exploit it.
Also speaking of owls, Alexander loves the Owl Diaries series. I forgot to pick more up from the library earlier this week and he was very upset, so Zoë let him borrow her copies of Owl Diaries (she got a set for Christmas, I think, and although she's now well beyond them reading-level-wise, she's not quite ready to pass them on to Alexander). Anyway, he calls them the "Owl diarrhea" books and it's delightful. 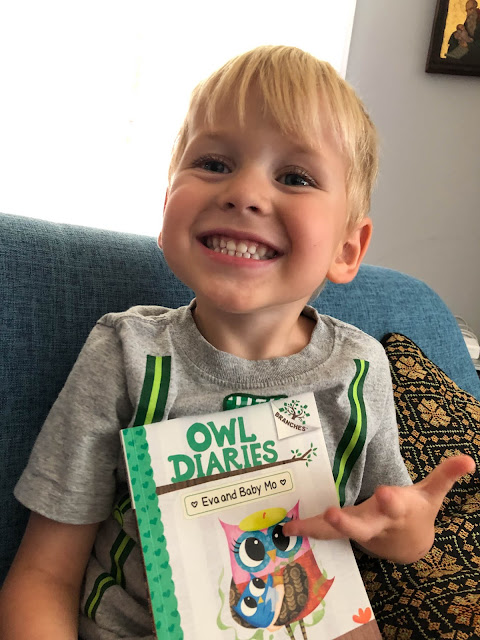 I did have to ban them at bedtime, however. They're early-reader chapter books, so they're not terribly long, but when I tell the kids they can pick out one book each to read before bed and Alexander comes back with Owl Diaries...well, it makes for a lot of reading.
He can't read by himself yet, so obviously I have to read these to him, but I figure sitting down with him once in the afternoon and reading an entire chapter book to him gets me out of having to do the same thing at bedtime.
(This is because I'm a mean mom. Ask anybody.)
Alexander is working on his reading skills, however! I don't make him do any schoolwork yet, so he mostly just hangs around and does whatever he wants while I work with the older kids. But he does have access to workbooks. They're workbooks that a couple of other kids have been through already, so he mostly just finds pages that haven't been done with and "does" those pages, and by "does," I mean that he literally just does whatever he wants with them. I don't make him follow the instructions on the page.
Recently, however, he's been interested in following the instructions on the page, so he'll ask someone to help him know what to do and then he'll mostly do that thing. It's been a pretty cool transformation to watch take place over the last couple of months.
Here he is after filling out the final sound for a number of animals: 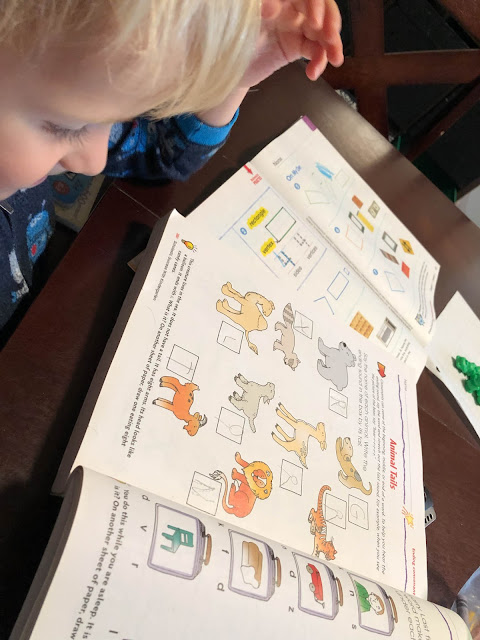 He had a whole team of people helping him sound out that ending sound (which is much trickier to figure out than beginning sounds), and in the end correctly identified the final sound for each animal correctly...except for the raccoon, which he insisted was a fox (in spite of everyone around him telling him it was a raccoon). If the raccoon were a fox (which...it's not), then he would have identified the correct letter for that ending sound, so I'll take it (I'm a lenient grader, especially when it comes to stubborn three-year-olds)!

And, lastly, here he is showing off the rhyming words he identified (cake, rake, and lake, which all rhyme with snake):

Except that we learned that he thinks rakes are called "brakes" (or "breaks"?). We tried to tell him that it's a rrrrrake (no /b/), but he insisted that it's a "brake, because you brake/break the lawn with it."

I just love the way he gets a good lip flap in whenever he says /br/ and /pr/ words, so I know I said the last video was the last thing, but here's the absolute last Alexander thing for tonight—a video of him saying "banana bread":