I was an early talker.

The year I was born, my older brother got a speaking teddy bear for Christmas. When the bear turned on it would say, "Hi!" and everyone would say "Hi!" back to it. By New Year's Eve, I was also—at six months old—saying, "Hi!" to the bear and had figured out that if I said "Hi!" to anybody they'd say "Hi!" back to me.

My mom told me I would make ladies do second takes when teensy little me (I was 13 lbs. at six months) would enthusiastically call out, "HI!" in the grocery store.

The other night Phoebe gave me a little taste of my own medicine!

I don't think she's quite old enough to understand cause and effect (though Alexander wasn't so much older when he invented his little head-tilt game (he figured out that if he cocked his head to the side he could make pretty much anyone also cock their head to the side; I thought he had a tic or something before I figured out he was doing it on purpose)) but the other night, Andrew and I were cooing over her when she locked eyes with Andrew and said, "Hi!"

It was, frankly, creepy.

It was a fluke, I'm sure of it. But it was a rather surreal moment nonetheless to have this tiny baby who doesn't know much about anything stare her father straight in the face and say, "Hi!"

This morning Rachel was holding Phoebe during church. I think it was while I was teaching because I was holding her through most of sacrament meeting itself; we're still zooming in. I'm a little heartbroken that Alexander missed his entire Sunbeam's year, but when I was bemoaning that fact he ran over and gave me a hug and said, "You were my Sunbeam's teacher!" The kids are going to be fine.

Anyway, that's all beside the point.

Rachel was holding Phoebe during church and Phoebe was fussing. Since Rachel was sitting down and bouncing Phoebe I suggested to her that she stand up, but I did it in a...not obvious way...I guess.

"She probably wants to stand up," I said.

For whatever reason, babies like their caregivers to stand up while holding them (walking around with them is even better). I know this about babies, but I've been doing babies for quite some time now. Baby siblings, nieces and nephews, and then my own babies. I've had babies in my life non-stop for forever.

Rachel is just beginning to understand how babies work. She has many younger siblings, true, but she was rather little as well. So this whole thing about me trusting her to know how babies work is new to both of us.

Then she started leaning over to put Phoebe on the floor...on her feet!

"Not her!" I shouted (about as loudly as I shouted at Alexander when he was looking like he was about to touch a red-hot sparkler) before she could let go. "YOU! You stand up with her and she'll calm down! Goodness gracious—she can't even hold her head up yet!"

"Okay, so that makes more sense," Rachel said, standing up and cuddling Phoebe into her shoulder.

Zoë, Benjamin, and Alexander aren't allowed to stand up with Phoebe. They have to sit down to hold her, which they think is rather unfair. And now that she's a bit older we've been trying to convince them to have "interact with Phoebe" time rather than "hold Phoebe" time—so we have them building towers for her and reading stories to her during her awake time, which they also think is a little unfair. They really want to hold her still, but she doesn't always like when they hold her because she's awake enough now that she knows she wants her caregiver to stand up with her...but they can't.

Anyway, weeks ago (December 16, to be exact), I had tried putting Phoebe down for a nap in her bassinet. She hardly ever uses it, but we try. I had swaddled her up in a very specific way to make her feel comfortable.

After reading quite a bit more about breech-in-the-third-trimester babies, I'm realizing that her little floating leg syndrome was probably due to her breechiness. All babies struggle sleeping through the moro reflex, but because Phoebe's legs would float up in the air she was particularly vulnerable to being startled, so in addition to swaddling her arms, I would stick a rolled up blanket or something under her floating legs. 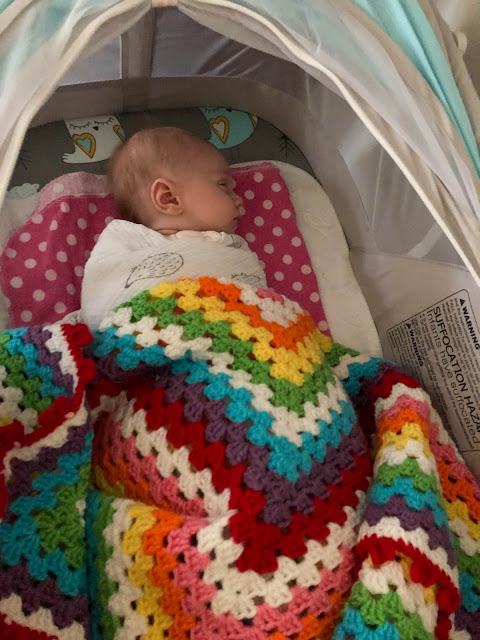 So I had left her resting in her bassinet in a very particular fashion and had snapped a picture of her before I ran downstairs to tell Andrew something (intending to return upstairs to be with her very soon since I know it's not very safe to leave babies alone with blankets and I'm a stress case). I imagine that what I was actually telling him was that I successfully laid Phoebe down (she really doesn't like to be left alone). While I was talking to Andrew, however, we heard her start fussing, so we ended our conversation and I ran upstairs to check on her (because heaven forbid my baby have reason to squawk!).

As I reached the stairs I saw Zoë and Alexander streak across the hallway to hide in their bedrooms, which was suspicious.

When I looked in Phoebe's bed, I found the blanket was completely over her face (which is why we don't leave babies with blankets in their beds), so I pulled it off of her and...

This caused Andrew to charge up the stairs.

"THIS!" I said, indicating the mess Phoebe was in (which I did not take a picture of).

Underneath the blanket that was smothering her, I found Phoebe—unswaddled and all askew! The burp cloth (birth clop?) and waterproof pad she had been resting on (we've got crazy reflux, folks!) were no longer underneath her and her little footrest was gone as well. These had all been tossed onto my bed.

We called in Zoë and Alexander who swore that Phoebe had already been fussing when they went in (I...don't think so) and they had only been trying to cheer her up (even though they'd been told to play in the basement while she napped).

"You picked her up," I said. "And then dropped her back in her bassinet when you heard me coming up the stairs..."

"Because the blanket I had her swaddled in is on my bed instead of around her!" I said. "And you just dropped this blanket over her?! It was right on top of her face—smothering her! Babies die that way!"

Okay, so that last part was a little bit harsh.

But also Zoë shouldn't be picking the baby up or putting blankets over her head, and I'm in "mother bear" mode, so...

Still not as bad as the time Zoë and Benjamin tipped the pack'n'play on its side and rolled newborn Alexander out of it to get at him...(ten points to whoever finds that story on the blog)...but still pretty bad!