Phoebe is seven months old, which—if we're rounding (and we did a lot of rounding today since that's what Benjamin's working on in math right now) is a year old! She's 58.3% of a year old. That's past the halfway point! I can't believe how fast her babyhood is flying!

She, of course, is determined to grow up. It seems babies just come that way.

She's inching around on her belly, pretty much anywhere she wants to go. She can get out of her bed on her own (she's on a floor bed rather than in a crib) and followed me into the bathroom the other day.

We are the proud new owners of a baby gate, which we smartly installed at the top of the stairs.

Here she is showing off her little army crawl:

She was not impressed when I moved the goalpost and decided she couldn't trust me to give her the toy I was teasing her with so picked out her own goal. Her favourite thing to do is inch her way around the world, putting everything in her mouth. Grass doesn't bother her a bit—sitting in it or eating it.
Here she is eating a leaf: 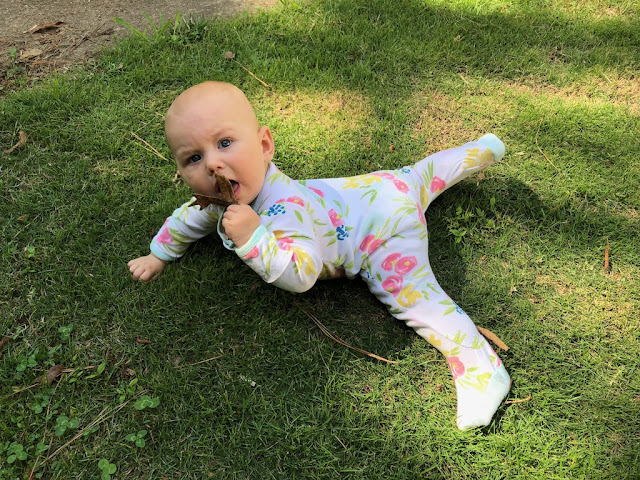 She also happily eats dirt and drinks pool water. Her immune system is going to be spectacular.

While I was giving Rachel a piano lesson yesterday (while Miriam was giving Zoë a piano lesson in the basement), Phoebe made her way from her play mat to the piano so she could tug/gum on the cords and run her fingers down the air vents to make fun noises. She starting to do little baby planks and I've caught her rocking on her hands and knees a few times, so I'm sure actually crawling is just around the corner.
We also officially adjusted her stroller from pram to push-chair. When we've tried it in the past, she's screamed and screamed over the change (she'd grip the seatbelt with both hands and acted like she was scared to death), so we left her in a supine position. But now she's perfectly happy to sit up in her stroller and watch the world speed by. 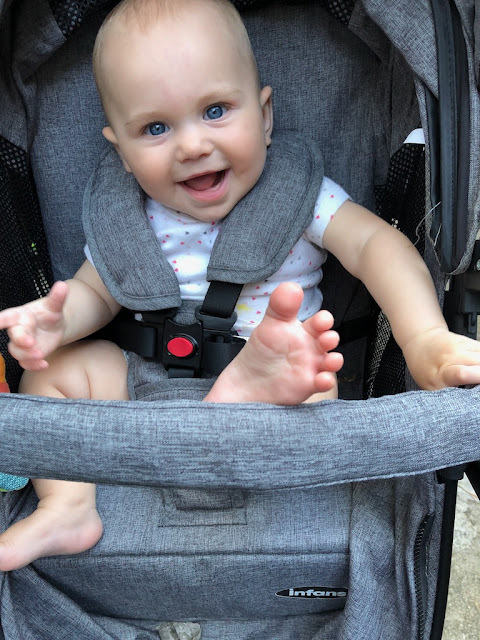 She loves putting her feet up on her stroller bar (as well as hooking her toes on the underside of her highchair try).
She likes to nap about every two hours. She thinks her siblings are hilarious. She thinks anyone eating anything should probably give her a bite. She loves cold things—ice cream, ice water. We just got a shaved ice machine (because we did the math and that was cheaper than taking six kids out to get shaved ice) and she loves eating little spoonfuls of ice.
She does not like warm food. She freaks out whenever I give her a spoonful of warm anything—so much that I'll worry that I haven't cooled down her food enough. But...nope...she just finds warm food a little jarring. Not enough to, like, refuse it (because food is food, right?!). After a few bites of warm food, she's good to go though.
She loves bath time; she loves going swimming; she loves pulling hair; she loves being held (but is starting to squirm down to play lately, which is lovely). She loves kitties and puppies and children.
She likes playing the piano, eating paper, stroking and sucking on various textiles.
She is not so afraid of altitude changes, can be carried down the stairs without panicking, and even will giggle when we toss her in the air...but not too high (she likes to keep a grip on whoever's doing the tossing).
She's a fun little thing!
Posted by Nancy at 1:27 AM