This weekend Andrew and I took Josie camping with the Heisses, the Gillespies and some other families from Andrew's parent's ward. It was quite fun. A little cold, but fun. We had three cabins: A (for adults), B (for the boys), and C (for crazy...that's the girls' cabin). We left Orem after helping Josie finish packing. Even with all the help, she forgot numerous things: like pants.

We drove through Provo canyon to the city of Heber and from there to the Heber Girls' Camp. It was a beautiful drive. At least, I thought so. It's probably a really good thing that Andrew and I lived in Jordan for a while because now I finally appreciate the beauty of Utah. I used to think it was an ugly old desert. Now I think that it has beautiful trees, tall mountains, plenty of water. Strange things can happen to one's point of view in a very short period of time!

Josie in the crazy cabin 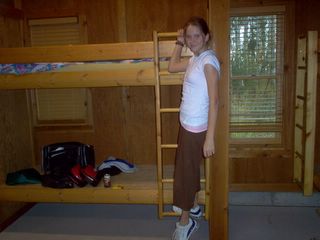 When we arrived at the camp site, we unpacked and settled down for some hot chocolate and cider. Jacob already had a fire all ready for us. Even though it had rained/hailed all day, he started the fire with only one match.

Andrew and Brother Wight by the roaring fire 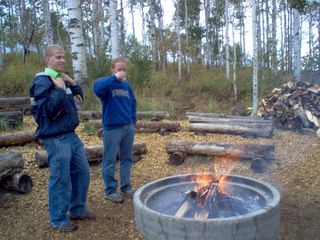 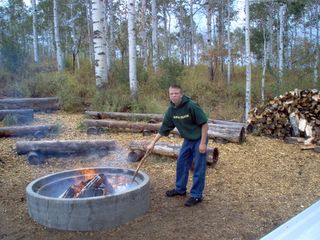 I spent most of my time in various cabins. It was much too cold for anyone reasonable to be spending too much time outside. Andrew spent a lot of time outside. He forgot his fleece jacket. He likes to blame me for that, but it was sitting right on the couch, so he could have grabbed it as well, so he wore his dad's jacket for most of the time. His dad then had no jacket because he had forgotten his coat on his bed (it must run in the family).

After a nice dinner of stew, we headed to the A cabin for games. A little boy, about 5 years old, was so excited to use his sleeping bag that he kept telling everyone to be quiet so that he could sleep. His mom kept telling him that it wasn't bed time yet...we all just ignored him and kept playing our (rather loud) games: cutthroat UNO and Apples to Apples. Finally Robert (the little boy) gets up on his bunk bed and starts yelling, "Excuse me! Excuse me! I have an announcement." So we all turned and looked at him: "Everyone look at Robert!" That got him, he kind of choked back his words and gave up giving his announcement. He stared at us with wide eyes and then said, "Okay, I want that table and that table to BE QUIET!" We decided it was story time. Karen told a nice story of her connection to Heber...and then a story about the importance of having integrity. We then had a group prayer and all headed to cabin B so that Robert could sleep. As we were leaving, he said to his mom, "But, I didn't get to have any fun!" It was pretty funny.

Before the story and prayer, Sarah and Emily finally arrived. They had been at the High School football game since Emily is in the marching band and pep band and Sarah is on the colour guard. They had a miserable time getting here. The heater and defrost wouldn't work so their car was all foggy and they had to drive with the windows down while it was hailing and raining. They got there and they were so scared and cold...needless to say, they weren't very happy. But they soon warmed up and started to enjoy themselves.

We also had a little birthday celebration for Andrew. He turns 22 on Tuesday (Sept. 19), so we had cupcakes. There were no candles so Karen stuck a pretzel in his cupcake.

Blow a little harder and it might go out! 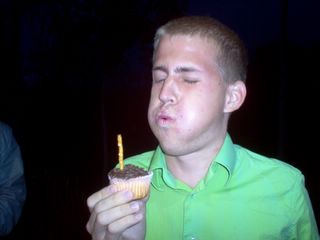 The cabins were surprisingly warm. I thought that I was going to be so cold all through the night, but I was actually just fine. Andrew slept like a log...I slept alright, but every time someone went in or out of the cabin, the door would slam and shake the whole cabin. Andrew would sleep through it, but I would wake up and be scared stiff for the next little while until I would finally drift off to sleep again.

We got up pretty early the next morning since some people had to places to be that morning. Breakfast was all ready to go by 7 am. Andrew and I were probably the last two people up! And when we walked out of the cabin there was a thick blanket of snow covering everything. Ugh.

James, Josie, and Sarah bundled up for breakfast 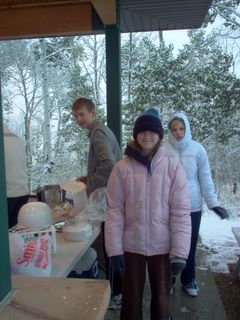 Andrew and Nancy and the snow 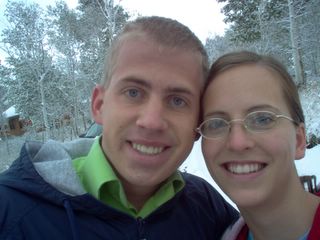 We started packing and cleaning up, but almost as soon as we started, we decided to quit and play games. Andrew wanted me to play hand and foot against his mom. She beat us all...we were very poor competition for her! When we were warmed up and played out we started cleaning up again. Before we knew it we were headed to the warm, sunny valley.

Jacob, Emily, Josie and Beth cleaning off one of the cars
using a broom, a dustpan, and some plastic utensils 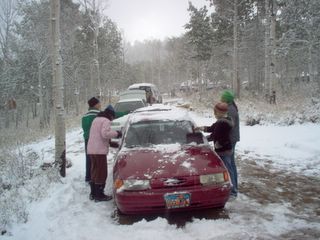 Andrew doing a final check of the cabin 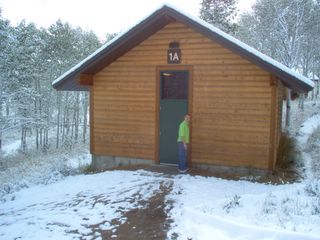 We had snow on our car the whole way down. I always thought it was funny to see a car with 5 inches of snow on it driving around the city, but you really don't have to be that far up in the mountains to get snowed on.

I spent the rest of the day watching my twin nieces while Andrew went home and started his homework. It was kind of nice to just have that little vacation and still have time to do some things when we got home.
Posted by Nancy at 8:18 PM