End of the Belly Button Saga

This morning when I picked Rachel up there was something hard on her back. I knew what it was instantly: her umbilical cord.

To be honest, I was a little disappointed. I had been hoping for something more...what's the word...dramatic. Like, I think it would have been better if it had fallen off while Andrew was either changing her diaper or giving her a bath. Yes, yes, that would have been good.

Falling off in the dead of the night is a little anticlimactic, don't you agree?

Andrew's reaction this morning was priceless though. He's just so good at shuddering. And he asked a question I didn't expect him to ask, although I wouldn't have put it past him.

"Is it going to be an innie or an outie? Is it genetic or just the way they cut..." he stopped and looked at me; I was looking at him incredulously.

So now, as Andrew would say, Rachel is all Rachel...there's no vestige of mommy left on her anywhere. The cord was pretty much hers the entire time, but I'm certainly glad she's hit this milestone of life. It was kind of gross to have it sticking out of her tummy.

It was sitting on the computer desk right now and I asked Andrew what we should do with it.

"Probably just throw it away," he said.

I was thinking we could bury it and plant a tree to mark the spot or something like they do in Jamaica, but throwing it away was easier.

I grabbed the remaining cord and said, "Okay, I'm throwing it away."

No sooner had I said those words and the cord landed at the bottom of the trash can when Rachel, who was lying on my lap, started caterwauling. It is for her sake we've included the following picture: 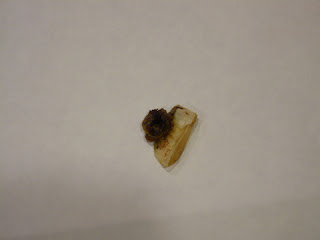 Now our little girl is all grown up and sporting a belly button. It's still rather gross-looking, but a belly button nonetheless.

Andrew will probably remind her that this is a big part of growing up...he likes to do that from time to time. The other day (let's see, yesterday?) he was changing her diaper and I could hear him talking to her, saying:

He's changing her right now and I'm straining to hear if he's telling her that girls with belly buttons don't cry...
Posted by Nancy at 6:27 PM