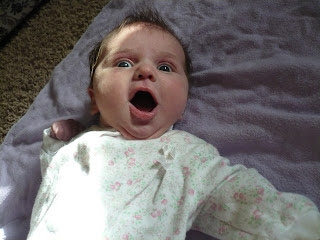 It is interesting how I always wanted to speed the pregnancy along and so would round up. For example, "I'm almost 21 weeks pregnant," means "I'm barely 20 weeks" when you decode it.

With the baby though, I keep trying to keep her small, so "She's 3 weeks old," actually means "She's 4 weeks tomorrow, but who's counting?"

I plan on counting her age in weeks for as long as I can manage. And then I'll move to months... Years is just to strange to even think about right now. Maybe I'll just keep counting in months forever, which means Rachel can't date until she's 192 months old.

So, today, Rachel is 4 weeks and 3 days old (about the equivalent of 1 month). We still don't have a handle on things. Last night Rachel decided that 3:00 am was the new 3:00 pm. I tried to get her to go to sleep until 4:45, at which point I enlisted Andrew. She finally fell asleep around 6:00 but still had the energy to wake up at 7:00. The kicker: she wasn't even grumpy--she just wanted to play.

Even though she still has her night and day mixed up, Rachel has grown up a lot. She almost fits in newborn clothes now, which means that people have seen her in more than just a onesie. She isn't quite as floppy as she used to be--in fact, she's really getting good at holding her head up. This is not as easy as it looks 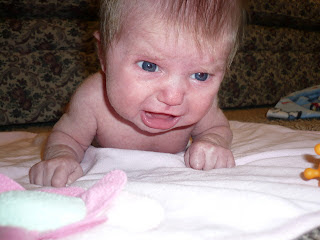 She's also starting to express herself in ways other than screaming at the top of her lungs. Trying to catch that on film is very difficult since she feels that if we're paying attention to her she obviously doesn't have to say anything to get attention. Take my word for it, she can be quite talkative.

And, she's started scooting around on the blanket to chew on things. I'm not sure if I'm too happy about that because I'm hoping that I don't have to baby proof the house for at least a few more months.

If only I could figure out how to open my hands 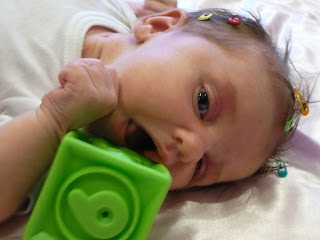 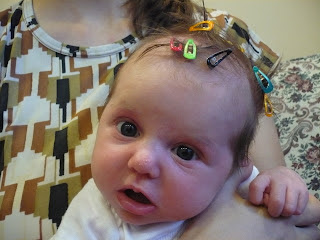 Time flies when you're having fun!
Posted by Nancy at 5:24 PM