The YSA from Jordan arrived much earlier in the day on Thursday than the other YSA in our district; Andrew and I took them out to Coptic Cairo, so that they didn't just sit at the church being bored, while Melissa ran to Carrefour to get some last minute things she needed for the conference.

It was...an interesting experience. I thought it would be alright because they're all grown ups, right? Wrong.

Herding 13 foreigners (okay, 11 Jordanians and 2 Americans) around Cairo was much more difficult than we thought it would be. It was the first time being out of the country for most of the Jordanians, and although Amman is big (pop. 2,125,4000), Cairo is huge (pop. 7,947,121) and different. It was fairly obvious that the Jordanians were foreigners, even though they look Egyptian enough, they aren't.

They kept insisting that they spoke Arabic, so they'd be fine. Let me say, again, that Cairo is huge and Amman is not so huge. Amman is a sprawling, and rather rural city. Still big, but not huge. Those from Al Husn, which barely registers on a map, were insisting the same thing. I admire their sense of adventure, but really...really?

This was the first time out of the country for many of them, their first plane ride.

And Egypt is rather different than Jordan.

"Just give us the address," they insisted, "We will find it. We speak Arabic."

And then a car would come down the street and we'd have to herd them out of the way.

Riding the metro? What a mess.

We gave them all two tickets--one for the way there and one for the way back. We should have just given them one because you have to hold onto the ticket to get back out of the metro and...ugh. It was just a big mix up.

We told them the stop we wanted was Mar Girgis. And then we waited for the train. When the train got there they meandered their way over to the train while the warning bell was sounding instead of running to jump on. We ended up fighting with the doors to be able to get everyone on because they just wouldn't hurry up.

When we stopped at Maadi station, about half of them got ready to get off the train. We had to stop them before they disembarked and I told them, once again, that we were going to Mar Girgis. 4 stops.

We got to Hadayak. Would you like to guess if they tried to get off the train again or should I just tell you?

They tried to get off the train...again. So I explained again...that we had 3 more stops.

It was an interesting train ride. Trying to be helpful, some of the Jordanian males herded all the girls into one corner of the wagon so that we'd be separated from all the Egyptian males.

That's how things work in Jordan, and I kind of appreciate it, but that's not how things work here. In Jordan, often but not always, if a woman gets on a bus the conductor will rearrange the whole bus so that the woman doesn't have to sit by a man. In Egypt it doesn't work that way. Sometimes a man will give up his seat, but you'll always be surrounded by men unless you take the women's car. End of story.

So we ended up in a big mob, right in front of the door, the whole way down the line and it was rather inconvenient for the rest of the population of Egypt. Luckily Rachel was looking rather cute--kind of like a tired little koala bear snuggled up on her Daddy's shoulders--and everyone was very forgiving. 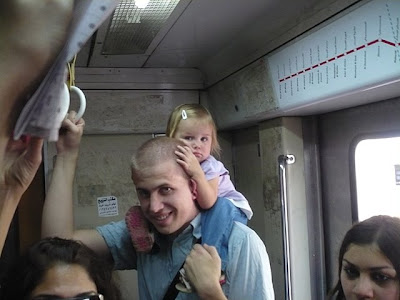 We all made it to Mar Girgis, though, and we herded them off the metro and into Coptic Cairo, stopping to take pictures every 5 feet or so. Mustn't miss a photo op.

Andrew and I had to split up; he led the tour up front and I brought up the rear, nagging and nagging and nagging about the need to move on. Really, though, once we were in the walls of Coptic Cairo, it wasn't that bad. There isn't really anywhere to get lost...

And there is a lot to see. So mostly we just went slowly, taking pictures of everything as we went. 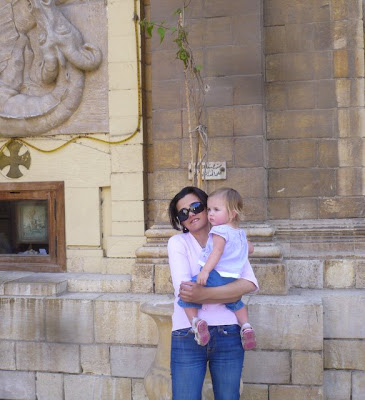 Rachel and Samah (from Al-husn) 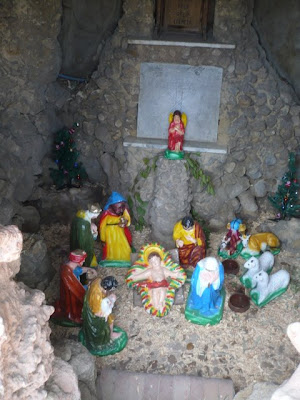 We found a nativity!
Rachel was a hit, as always, with all the Copts. She got fig bars, date bars, cookies, and a whole lot of hugs and kisses. She and I had a little break from all the attention she was getting--from both the Copts and the YSA from Jordan--outside one of the chapels. Rachel enjoyed her cookies and everyone else went inside to see the cave the holy family hid in (one of several that exist in Coptic Cairo). 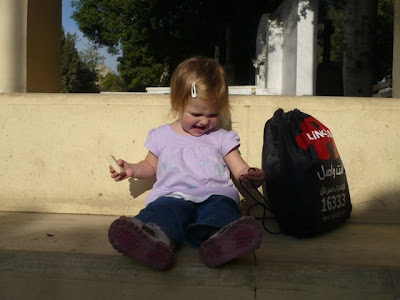 When we headed out of the church compound in Coptic Cairo to find the Ben Ezra synagogue, we lost several of the YSA. Some people went to find souvenirs, others went to find refreshments.

I stood by and waited for some of the YSA to finish getting completely ripped off; they didn't want my help figuring out prices because they spoke Arabic and could handle it themselves. And Andrew found the ones trying to buy ice cream.

Watching the interplay of cultures and language of Jordanian and Egyptian Arabs was interesting. While it is true that they both speak Arabic, it is kind of like an American going to London. I've been to London and I know that I get lost there, even though I speak English. The English that I speak quite a bit different than the English spoken in London, so while we understand each other for the most part, there are several possibilities for miscommunication.

My favorite story of such miscommunication is when Andrew found those ice-cream-buying YSAs asking for "booza."

If you want to find ice cream in Egypt you have to ask for "ice cream." So much for speaking Arabic.
Posted by Nancy at 5:06 AM