The McCallisters invited us (Canadian/American) over, along with the Schillings (American), the Davies (British/Welsh), Ray (Filipino), and Bertram (Nigerian), for Christmas dinner yesterday. They made an authentic Egyptian meal and it was delicious. And they turn their heaters on so it was warm and cozy. And they had a big Christmas tree and several nativity sets and cute little "fir" tree plants all over the place. It felt quite a bit like a real Christmas, actually. 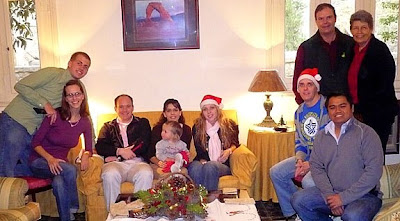 Rachel even (finally) warmed up to President McCallister and was content to sit on his lap for quite some time, holding her toy cell phones up to his ear and playing with his reading glasses.

While we were visiting, Sister McCallister suggested we each tell a Christmas memory that stands out in our mind. I was racking my brain and could only come up with a few memories, one of which was about Josie when she was about three.

All the older kids were all in the basement waiting for our parents to come down and tell us it was alright to come upstairs and look at our stockings. Josie was little enough that she was allowed to be upstairs before it was time to "unveil" the presents, so to speak. My dad was carrying her when he came to get us and they had to walk past the gifts in order to get to the stairs.

She peeked, and as they were walking down the stairs she cried out elatedly,

"I got an Esmerelda doll! Oh, thanks Mom and Dad!"

The minute she saw us all standing at the bottom of the stairs she clamped her mouth tightly shut. Her eyes searched all our faces; I don't know what she was looking for but I think it was a hint of disappointment or shock at her declaration of Santa's true identity. She found what she wanted in Patrick's face.

"I mean..." she paused sincerely and dramatically and then, after mumbling an apology to Patrick, resumed exhuberantly,"...Thanks, Santa!"

Patrick is 5 years older than Josie. It was so hilarious that she thought she needed to apologize to him for spoiling Santa's identity when she was only 3 and he was 8. She was quite a cynical child and apprently thought Patrick was much more gullible than herself.

Andrew shared about our first Christmas together. We were in Rome on our honeymoon and did nothing. Absolutely nothing.

Actually we went to the Vatican earlier in the day, which means we probably went to see the Coliseum and other things as well, and saw all the chair set up for midnight mass and even asked a priest for the details so that we could go. And then we went back to our ghetto hostel to take a nap.

We woke up around 10 PM and it was cold and rainy and dark. The metro and bus systems had already shut down for the holidays which meant that we would have had to have walked from the hostel, which was by the Termini train station, all the way to the Vatican. It wasn't actually a terribly far walk, but just the fact that it was dark, cold, rainy, and late made the thought unbearable. So we just went back to sleep, got up the next day, and went out sight-seeing.

We had a lot of fun that Christmas even though we didn't buy each other anything, other than a whole lot of pizza!
Posted by Nancy at 12:52 PM