We were outside on the lawn of the church villa eating a lovely Christmas dinner yesterday when Santa arrived in his bright red suit.

"Ho, ho, ho!" he laughed and, like the pied piper, was followed by a trail of cheering children all the way into the church.

But not Rachel. She screamed and ran to me, instead. I took her inside to meet Santa and she was not impressed. She watched with horror as each of her friends went up and sat, willingly,* on his lap. She could not believe her eyes.

Finally it was her turn. I tried to get her to walk up to Santa all by herself, but when it was obvious that wasn't going to happen I went up with her. She totally wigged out. That blur in the pictures? That's her. 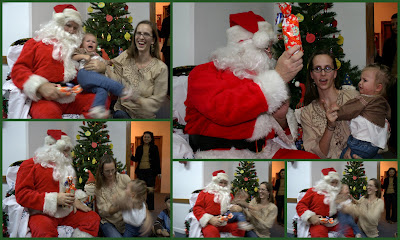 She didn't want anything to do with Santa at all. When he tried to give her a present she shoved it back at him and yelled, "Nooooo!" 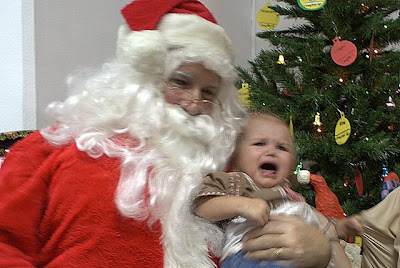 The best picture of Rachel (with Santa) that we got
I took the present for her, anyway, since I knew she'd want one and we retreated to the farthest corner of the room (by Rachel's insistence) to open it. Inside was Kaleidoscope the Cat, which Rachel thought was totally awesome. They also got a little package of candy, which Rachel devoured in no time flat. 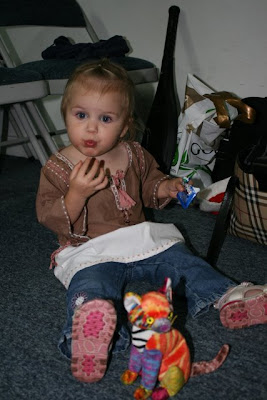 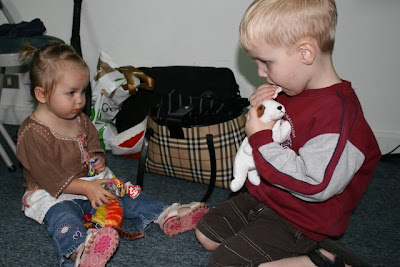 Rachel and Sam comparing clinging to their toys
The funniest part is that Santa was Brother Fife, not some strange man in the mall. He did have a good makeup job, though, and it took me a while to figure out the true identity of our branch's Santa. Maybe next year Rachel will be more willing to visit with Santa.

*Sam, Lydia, and Finn also were not so willing.
Posted by Nancy at 2:34 PM