We woke up early again this morning, though not so early as we did on Saturday, in order to try to go to the Dome of the Rock again. This time, we were successful.

He decided the hassle of being patted down was more desirable to the the hassle of taking off the backpack and unloading his pockets.

Jews are not allowed to visit the Dome of the Rock, not because the Muslims wouldn’t allow them to, but because Jewish law forbids it. They consider the site so holy that it shouldn’t be walked on, specifically because they are not sure where the Holy of Holies is and they don’t want to accidentally tread on that. There is a sign at the bottom warning Jews that it was verboten.

It isn’t forbidden to us, though, so we walked up the ramp leading up above the Western Wall to the Dome of the Rock. We saw where the police keep their riot shields for Friday prayers and several heavily armed police officers, walked past all of that and entered the complex to a view of the Al-Aqsa mosque, which is rather bland but apparently has a stunning interior. It’s very famous in Islam; it’s where Mohammed visited in his Night Vision and Assent. Because of the Temple Mount and Al-Aqsa, Muslims prayed facing Jerusalem for the first few decades of Islam. 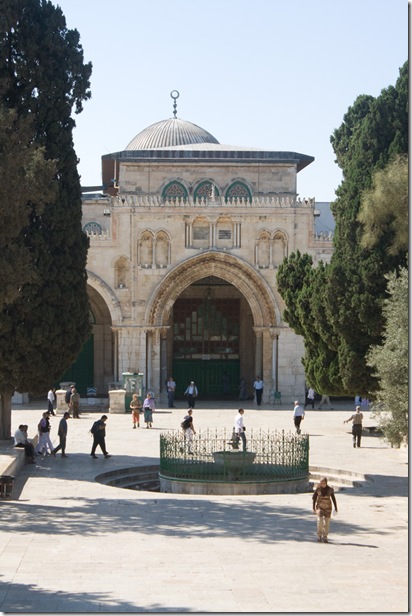 The Dome of the Rock, on the other hand, really is as cool as it looks. Stunning, really. It’s an absolute Byzantine gem. 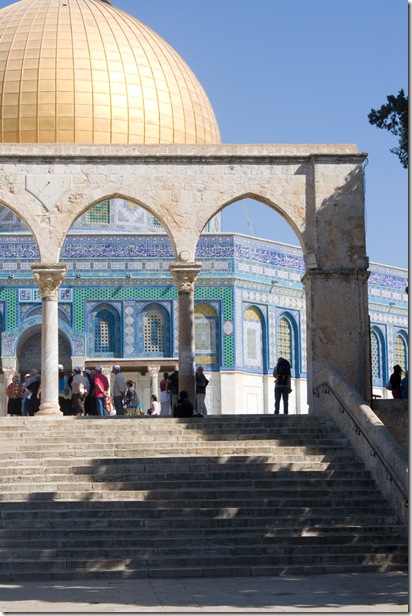 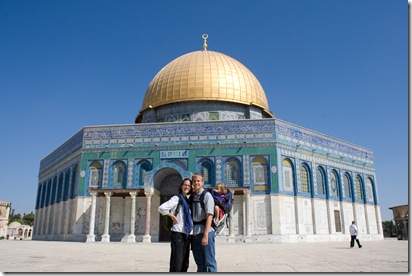 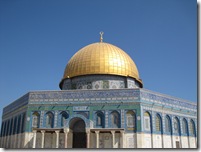 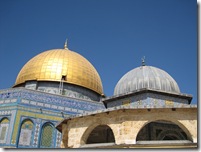 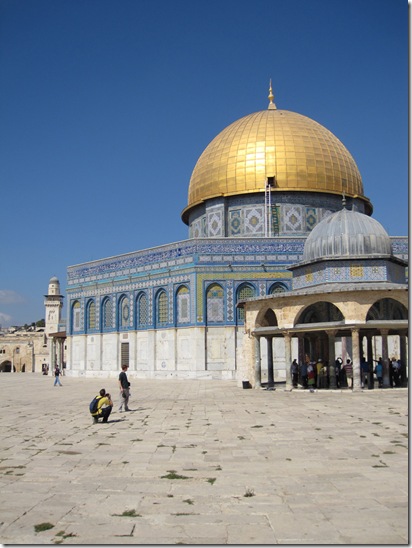 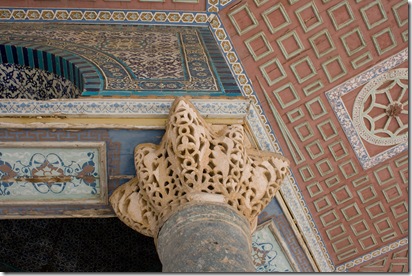 We aren’t allowed inside the mosques as non-Muslims, a rule that Israel decided on, so it was a pretty quick stop and then we were on our way to Hezekiah's Tunnel.

Hezekiah’s Tunnel is a pipe of sorts, really. It was dug by Hezekiah to divert the water supply of an aboveground spring to be underwater in order to insure that the city would have water during the 700 BC siege of the Assyrians.

It’s narrow enough that you can only walk single file and everyone has to carry a flashlight. You wade through water the whole way, from ankle to thigh deep. There was a big sign warning against the use of backpack carriers and saying that the hike is not recommended for pregnant ladies or those suffering from claustrophobia.

Unfortunately, that sign is at the bottom of a long passage way to the tunnel, after you’ve already paid for your ticket and when you’re basically at the point of no return…unless you walk through the Canaanite tunnel, which is a one-way hike to the exit with no chance of re-admittance. 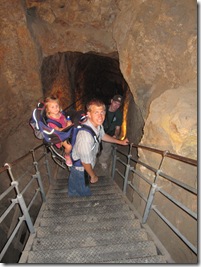 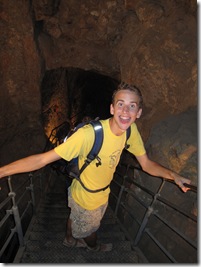 We decided that we’d try it, anyway. None of us are very claustrophobic, though you can’t help but have a few claustrophobic thoughts while making your way, hunchbacked, through a pitch black tunnel no wider than your shoulders, and I figured that hiking through Hezekiah’s Tunnel couldn’t be any more strenuous than hiking the Mount of Olives. If anything, it was going to be less strenuous and I couldn’t really see how it would endanger my pregnancy. As for the backpack carrier, we decided we’d just try it, anyway, since no one at the top had warned us that it wouldn’t fit and now we were stuck at the bottom with it.

It didn’t fit. Andrew couldn’t bend over to walk through the first part of the tunnel without risking decapitating Rachel. So he slowly backed out of the tunnel and we debated what to do while we were blocked in a little passageway by a huge tour group.

Eventually a worker came to tell the tour group to move on and asked us if we needed help with anything. We told him about our backpack dilemma. He told us that we could still take Rachel through the tunnel, just not in the backpack…for the very reason we had already discovered.

I was the lucky one to carry Rachel through the tunnel. Andrew carried the baby backpack with our water backpack strapped inside instead of Rachel, along with all our other hud.

Rachel screamed for the first half hour of the tunnel. We tried to tell her how much like a Dora adventure this was, but she wasn’t about to fall for anything like that. And then I hit my shoulder on the side of the tunnel.

“Whoa! Ooops!” I said while I ping-ponged between the walls of the tunnel, trying to reclaim my balance.

She leaned back and bonked her head on the wall.

We kept her laughing until the end of the hike using slapstick comedy. Andrew would stumble, I’d trip or bump Rachel gently into the side. Rachel would laugh and laugh and laugh. 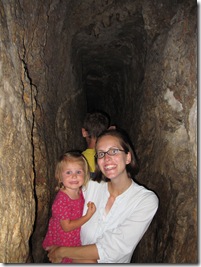 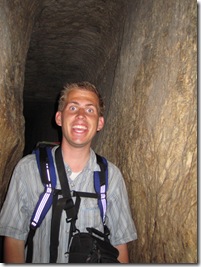 When we stepped out, blinking, into the late morning sunshine we asked Rachel if she had fun in the tunnel. She said she did. We asked her if she wanted to do it again. She said she did not.

Later she told me she was afraid there were going to be bats and that’s why she was screaming.

The tunnel exits at the Pool of Siloam, where Jesus healed the blind man. We stood on the pillars in the pool and did some yoga. Not that that has anything to do with healing the blind, but there were pillars. We had to. 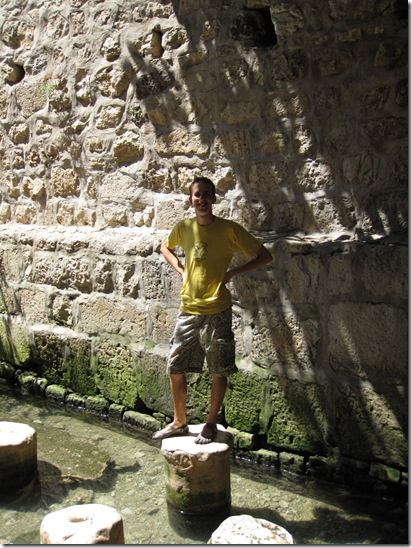 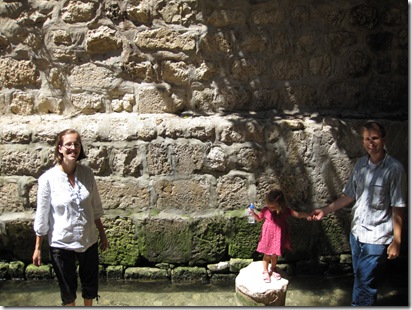 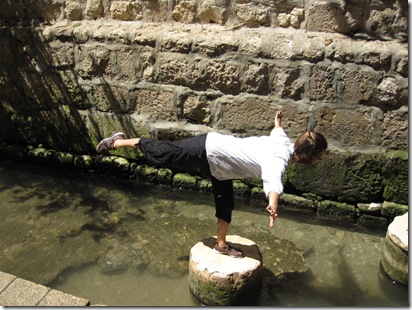 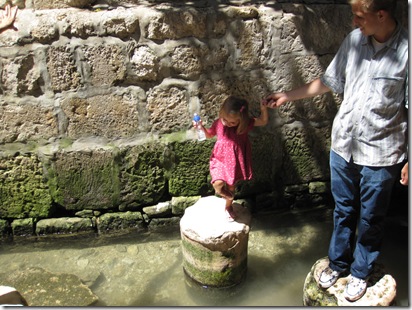 After that we made our way, squelching our wet feet, to the Citadel museum. We had gone to the light show the night before and bought a combined ticket, which let us into the museum for free, basically. The museum had a lot of displays, kind of like a science fair, but lacked many real artifacts. I guess most of those are in the Israel museum and we never made it there, unfortunately.

The Citadel did afford us an excellent view of Jerusalem, however, and it was fun to walk along the walls. 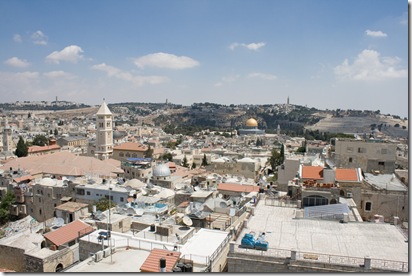 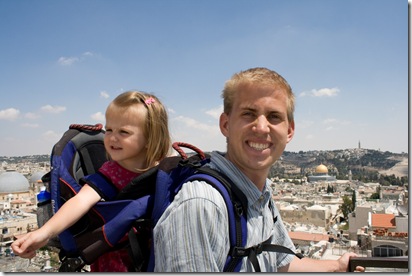 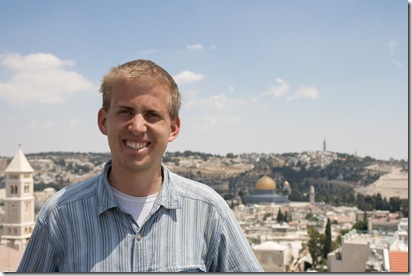 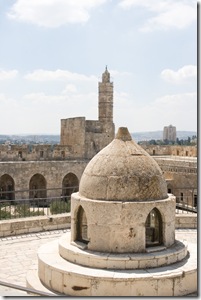 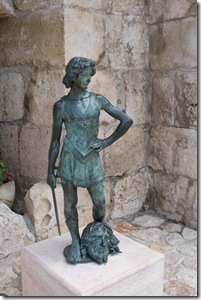 By this time in the day we were all starving, so we hurried through the rest of the rooms, filled up our water bottles at the lovely drinking fountains they have all over Jerusalem, and headed out to find something to eat on our way to the Garden Tomb. 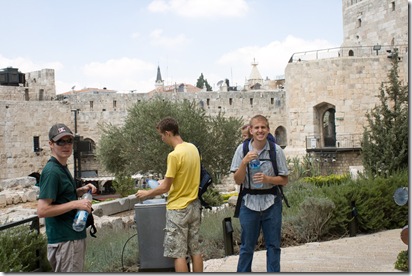 With it being Ramadan, it took us a long while to locate anywhere to buy cheap falafel. We kept winding our way towards Damascus Gate, which is near the Garden Tomb, hoping to find lunch along the way. Eventually I told the boys that I was giving up. Rachel and I parked ourselves on a set of stairs, out of the way of traffic, and sent the men off to be hunter-gatherers.

They returned with warm bread and falafel, and some delicious humus. Thinking we were isolated from most of the hubbub of the streets of the Old City, we started passing around food.

I was ravenous (have I mentioned lately that I’m pregnant?) and claimed the first loaf of bread. I had just ripped off a piece and was about to pop it into my mouth, too hungry to bother with falafel or humus, when some Muslim boys, probably between 11 and 13 years old, surrounded us, brandishing sticks.

“Inte mujnoona?!” they shook their sticks and shrieked at me, “Are you crazy?! It’s Ramadan!”

“Yes,” Andrew told them in Arabic, “But we are Christians, and besides, she’s pregnant.”

They threatened us with their sticks again, told us that they didn’t care, that they didn’t want to watch us eat, and chased us off. We found refuge in the Christian quarter. Religious intolerance is rather prevalent in Israel, it seems, almost encouraged—institutionalized racism. It keeps people afraid of each other.

Truthfully, we shouldn’t have been eating in front of Muslims but in our defense we were out of sight of the boys when we brought out the food. Must have been the smell that drew them towards us, although I don’t know why that would be the case since bakeries and restaurants remain open during Ramadan so the streets are constantly flooded with delicious smells, anyway. Besides, I am exempt from fasting by Islamic law because I’m pregnant.

I don’t know why they were so upset that they stumbled upon us (well, me) eating in a secluded stairwell leading to the Christian Quarter, but they were, and not wanting to be beaten with sticks (I doubt they really would have touched us) we left to eat around the corner, which was miya-ba-miya in the Christian Quarter instead of border lining the Muslim Quarter. 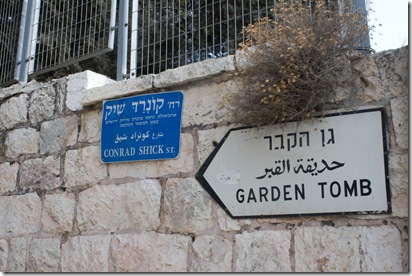 It was closed and we were a little baffled by this until we remembered that we had gone to church on Saturday, which meant that it was now Sunday, and the tomb is closed on Sundays because it is a Christian site.

We’re so used to going to church on Fridays that we could have sworn it was Saturday. At least we knew were the tomb was, right on Conrad Shick Street, just paces away from Damascus Gate. We made note of the hours to make sure that we wouldn’t mess up the next day, and left to go back to our apartment. I was wiped out.

The boys all left to go back into the Old City after dinner. Rachel and I stayed and relaxed (ie: used the Jacuzzi bathtub and then slept) in the apartment. It was the most wonderful evening!