Almost immediately after arriving in Eilat I looked with longing across the tiny Gulf of Aqaba to the gigantic Great Arab Revolt flag over in Jordanian Aqaba. Only a mile or two away from our hostel lay the great country of Jordan—my first Middle Eastern experience. When we were in Aqaba over three years ago I looked over to the glitzy lights of the Eilat resorts wondering what Israel was like, but because of the tense political situation (resulting in war a week later), we couldn’t ever make it across the Jordan river to Israel/Palestine. 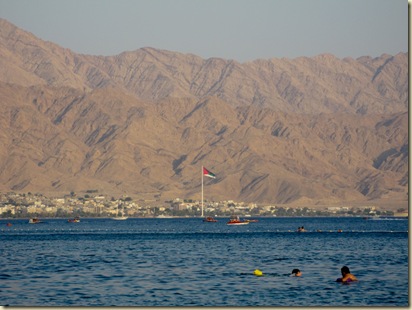 I felt a little conflicted over finally being in Eilat. After the horrendous border crossing experience at Taba (more on that in a later post), I already missed the Arab world. Taxis in Eilat kept the speed limit and didn’t try to pass slower traffic with reckless abandon. Pedestrians had rights, but I could only cross at a crosswalk. I absurdly felt a little restricted; I was less free to do whatever I wanted. Laws were just getting in my way. I should probably get over that before we move back to the States next year—it could cause some trouble… Additionally, I almost felt as if I had betrayed the Arab World, in a way, by visiting Israel. I don’t agree with much of Israeli policy and support many of the BDS initiatives against it.

Beyond politics and ideology, Eilat was simply disorienting. Everything was in Hebrew. Everyone spoke Hebrew. Nobody spoke Arabic and only a few spoke passable English. I was helpless and lost.

Nancy and I have always wanted to return to Jordan. Despite our constant lack of water, Jordan really was a fantastic place, and after living in Egypt for more than a year we wanted to see what we were missing. Since Petra is relatively close to Aqaba, we decided to take Patrick and Joseph over to show them the sites and experience Jordan again.

Sadly, with Nancy so pregnant, it wasn’t feasible for her to come, since Petra involves hours of hiking in the hot August sun. So early Wednesday morning, after sixteen hours in Israel, Patrick, Joseph, and I headed out to Jordan, leaving Nancy and Rachel home for an adventurous day of dolphin-watching, bus-ticket-buying, and swimming at the beach.

The Yitzhak Rabin border crossing is just on the outskirts of Eilat and crossing into Jordan was a completely pain-free process. After paying an exorbitant exit tax, young female Israeli border guards happily processed our passports (and my separate visa)—the girl at Joseph’s window even flirtatiously offered to hook him up with one of her friends. It was a completely different experience from the crossing the day before. They made it despicably humiliating to come in to the country, but happily sent us away without any problems.

Snipers in tall towers watched as we walked along a long road barricaded on both sides by several layers of razor and barbed wire, keeping us away from the mined no man’s land that separates the two countries.

Once we arrived at the Jordanian side of the border, I felt at home. The border guards greeted us and I struck up a conversation with the guard handing out entrance cards. Getting a separate visa card was a piece of cake and we were out of the border terminal in a matter of minutes.

A taxi driver approached us and offered to take us into town. Our original plan was to find the minibus station in Aqaba and take a cheap bus directly to Wadi Musa, the city right outside Petra, but unfortunately we had missed it. There were other buses that stopped in nearby cities and villages, but we would have had to change buses a couple times, and since we were pressed for time, I arranged for a private taxi for the day with the initial border crossing driver. He drove us into some empty neighborhood and called up one of his taxi driver minions, who would then take us the rest of the way. The new driver, Mohammed (quite an original name), was drowsy when he came to pick us up (Ramadan kareem), but fortunately was alert enough to drive his green stenciled taxi safely. 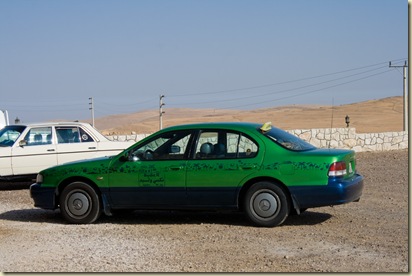 The two hour drive up north was fantastic. Jordan is spotlessly clean compared to Egypt. Sure, there were plastic grocery bags scattered here and there, but dozens of Bedouin combed the highways to keep the trash off the streets. Absent was the usual heavy-handed police presence so prevalent in Egypt; when we did see police they drove new SUVs instead of the ancient Egyptian blue police trucks. (Like this one. Or this one. Or even this one.) Things seemed to just work in Jordan. It was a refreshing change from the continuous chaos of Cairo.

Talking with Mohammed was also fascinating. He was a Bedu from a village seventy kilometers outside of Aqaba and he had political views (what else can you talk about in the Middle East?) that I had never heard from an Arab. He was a “pure” Jordanian (urduni koh)—not a Palestinian or Palestinian-Jordanian—and kept complaining about the insidious Palestinian conspiracies to destroy Jordan by dominating the Jordanian economic and business sector, reordering the political structure (especially since Queen Rania is Palestinian, although he does like her), and generally destroying Jordanian nationalism. He, like Golda Meir, insisted that there has never been a Palestinian people and that they should all just leave and find some other country—not Jordan and not Israel—to live. It was shocking to hear his opinion. Throughout the Arab World, from Marrakesh to Dubai, from Amman to Cairo, I’ve only heard positive things about the Palestinian cause. It was, needless to say, surreally bizarre. 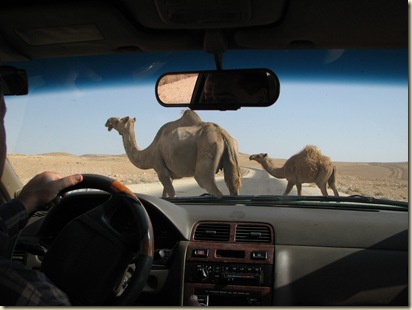 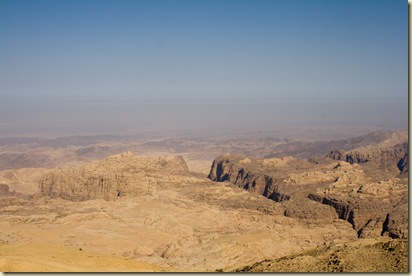 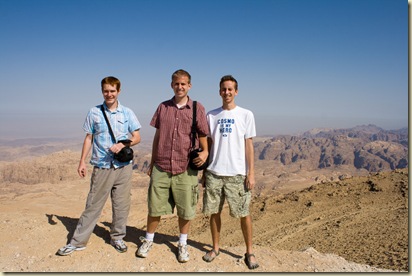 We got to Petra at 10 AM, arranged to meet Mohammed at 4:30 PM, and went to buy our tickets, which were unfortunately a lot more expensive than we had hoped. Apparently Petra no longer gives student discounts. When we went three years ago we had Jordanian student ID cards, which meant that not only did we qualify for the student discount, we counted as Jordanians and only paid something like 2 JD. Price this time? 22 JD. Ouch.

After a short hike we made it to the entrance of the Siq, the narrow canyon that leads to the main city, and just like Nancy and I did before, we slowly made our way through it, stopping every few yards to take pictures of the gorgeous ancient canyon. It also took a while to get past a bottleneck created by several large groups of Italian tourists. Italians were everywhere this trip—all over Jerusalem, Nazareth, the Galilee, and even Petra. 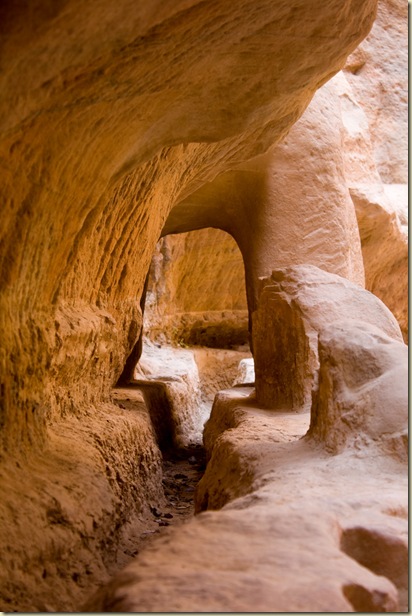 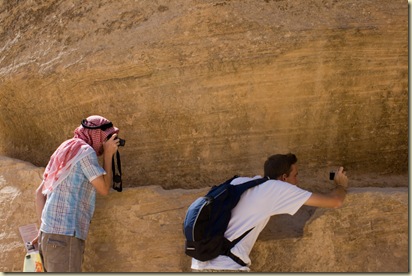 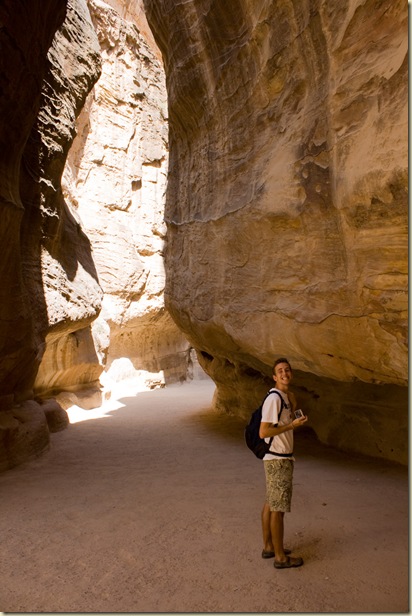 At the end of the Siq lies the breathtaking Treasury (yep—I just said breathtaking), which is just as breathtaking (I used it again!) as it was three years ago. Patrick and Joseph were most impressed, and Patrick took one of his signature photographs—a picture of his foot at a famous place. He totally cheated, though. 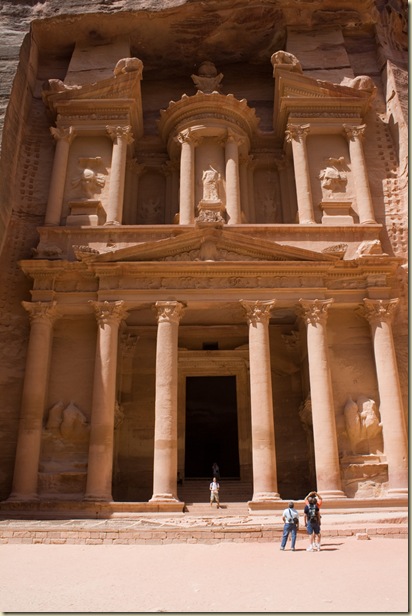 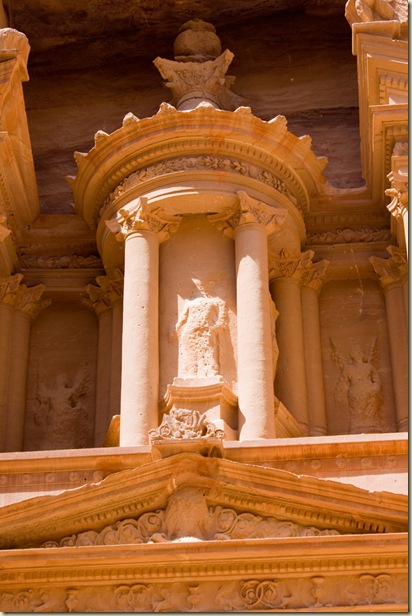 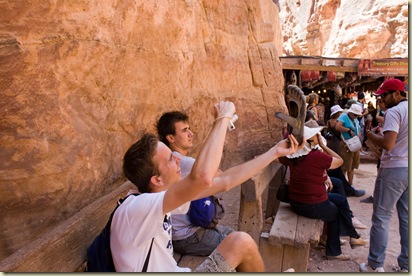 After admiring the Treasury we headed down the main road to see more of the ancient city and surrounding tombs. Not much has changed since the last time we were there. Bedouins still tout expensive camel rides and photo-ops. Bedouins still claim that a donkey ride is much faster than hiking up to the more distant sites, despite the fact that your guide walks the whole way with you. The tombs are still there. It’s still hot. And the Bedouins still harvest random rocks to sell.

We made our way to the back of the main city to the base of the hike up to the Monastery, stopping to hike up one side canyon full of tombs (the same one where we were warned about a vicious wild fox three years ago. Yep. A fox.) 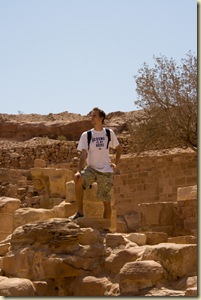 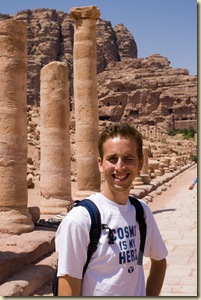 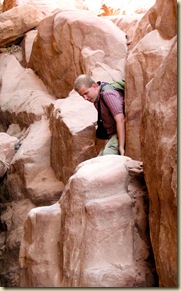 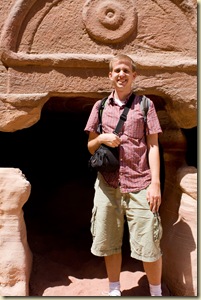 The hike up to the Monastery was as steep as ever. It took over an hour of climbing up hundreds of steps before we made it up—Rachel and Nancy would have never survived. We all look happy here, halfway up the mountain, but I’m on the verge of collapsing. Silly me. 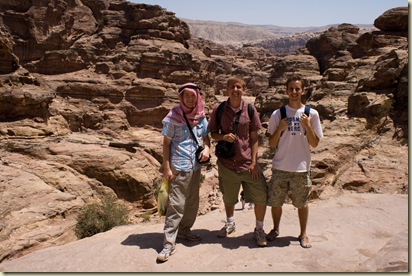 We made it, rested for twenty minutes, and turned around to go back. We were too tired to go the extra kilometer to another panoramic viewpoint. The Monastery was good enough for us. 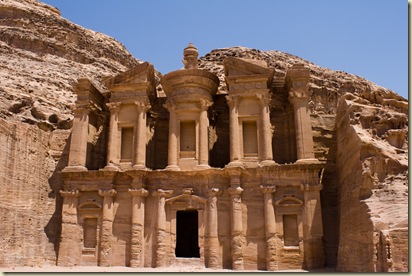 After we made it back down we walked across the valley to the Urn Tombs, which have large and semi-cool (as in not hot) caves, where we rested for half an hour while drinking water and eating rice cakes and date cookies. That’s all the food we brought. Silly us. At least the view from the cave was pretty spectacular, and the tombs provided Patrick with some impromptu rock climbing. 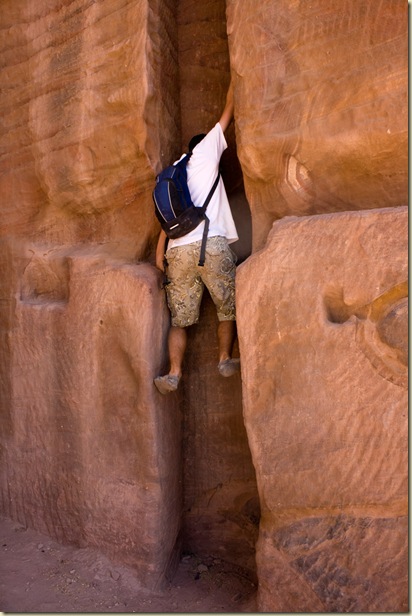 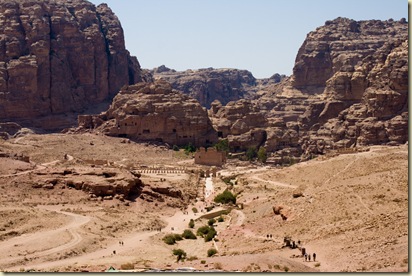 When we came to Petra the first time we spent two days hiking around. We did the Monastery hike on the first and ascended to the High Place of Sacrifice, a similarly steep hike, the next day after a long night’s rest. We were pressed for time this visit, though, so we decided to do the High Place of Sacrifice only an hour after finishing the Monastery.

Splitting the hikes into two days is much better.

After five minutes up hiking up the steep stairs, both Patrick and I pulled over to rest. We only went a few dozen feet before resting again. We were decidedly dead. We debated with Joseph about whether we really wanted to go all the way up, but in the end we decided to do it. It was long and grueling, but somehow we made it. We lay at the top, defeated, while Joseph went to take pictures. Patrick almost offered himself as a sacrifice on the altar. 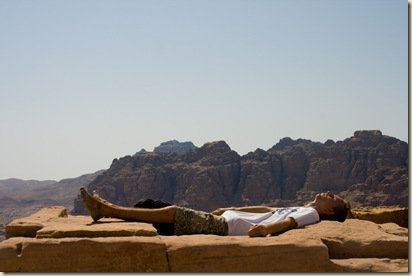 The view of the rugged landscape was incredible. There was only one tree on the mountain for the High Place of Sacrifice. How it’s still alive, I’ll never know. 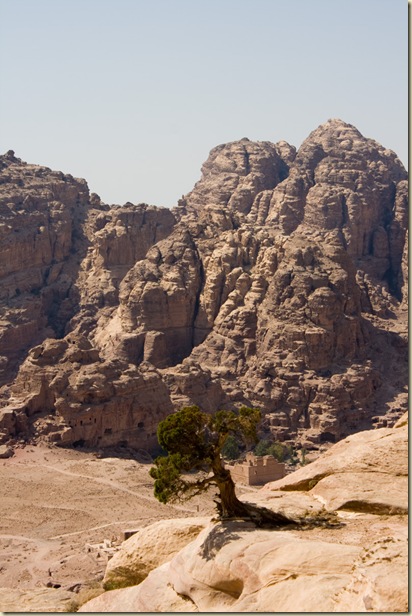 Pressed for time, we headed back down the mountain, took one last long look at the Treasury, and entered the Siq. 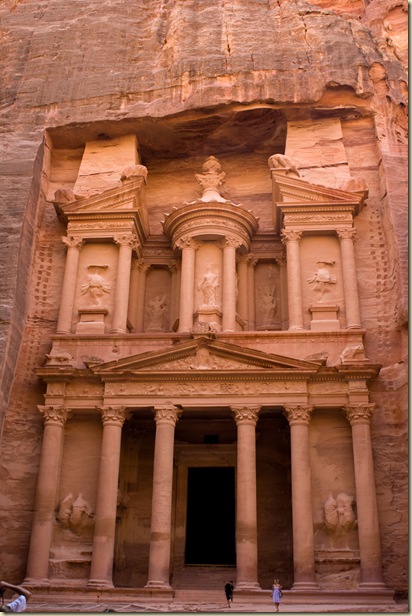 We quickly found Mohammed at the visitor’s center and headed towards Aqaba. I wanted to sleep on the way back, and since Mohammed was such a talker on the way up, Joseph offered to sit up front and talk with him. This didn’t deflect any of the conversation from me, though, and Mohammed talked to me through the rearview mirror until I drifted off, probably mid-conversation.

Mohammed dropped us off directly at the border crossing and bid us a teary farewell (I overtipped him since I had extra JD to get rid of).

Crossing back into Israel was painless for Patrick and Joseph, but took a little while since we crossed with several busloads of tourists also returning to Eilat. It was a little more difficult for me, though, since I requested a separate stamp (although not nearly as bad as the day before). After some brief interrogation, the border guards took my passport and told me to wait on a bench for five minutes while they took care of it. Forty-five minutes later I finally got it, delivered by a stern border guard, who told me to get going.

We took a taxi back into the main city and got to the hostel just as Nancy and Rachel came home from the beach. Exhausted, we all went to a pizza place next door before going back to the hostel and crashing before our journey to Jerusalem the next day.