Since I never seem to leave the house anymore I don’t have anything interesting to say, really, except that I was breastfeeding Miriam with the window open and I looked up and was met eye-to-eye with a lumberjack.

It was a little awkward considering I was, you know, breastfeeding. But at least he was across the street. Barefoot. Up a tree. Wielding an axe. And hacking away at the very branch he was standing on. Inches away from his toes. I don’t think they have worker’s compensation here…

I took a picture through the screen but felt kind of stupid doing it since he was watching me and I was watching him. I waited until he started working again before I snapped a picture. 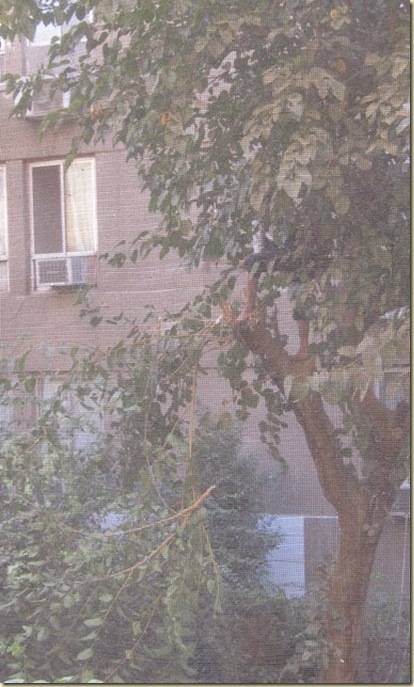 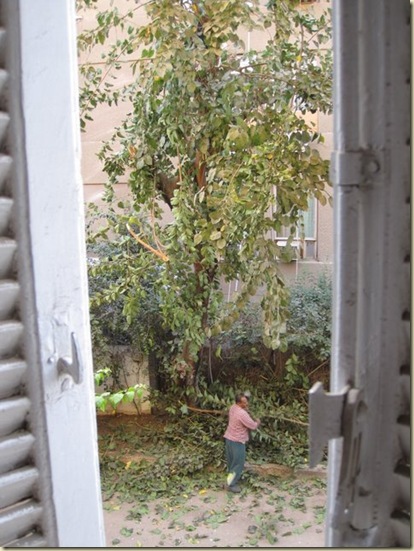 Luckily there were no cars parked on the street. We’ve seen branches fall on cars and smash them to smithereens. (And when the owner of the vehicle came out to yell about that, the axe-wielder said he was just doing his job—cutting down the branch—and that he could not know beforehand where it would fall…that was God’s will). We’ve almost been hit by falling branches, ourselves.

Rarely are “Men at Work” signs used here. You find out men are at work by glancing out the window while feeding your baby and noticing a man standing in a tree, holding an axe, and noticing you.