Dinnertime was exceptionally silly today. It started by singing I Know an Old Lady Who Swallowed a Fly in the kitchen while making dinner.

Rachel diverted from the original lyrics, making the old woman swallow such interesting things as monsters, cars, toys, and camels.

“I know an old woman who swallowed a…monster!”

“Why’d she swallow a monster?”

“I don’t know why she swallowed a monster! Perhaps she’ll die!” 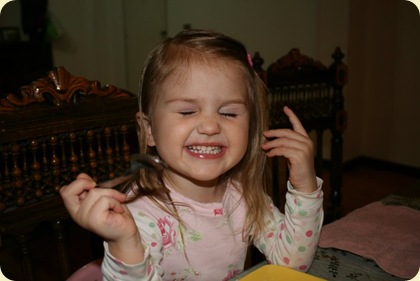 When we had exhausted every possible thing to swallow (or nearly exhausted), Rachel switched songs.

“Last night as I lay on my bunny!” she prompted, “Sing that song!”

“You know! Last night as I lay on my bunny! I dreamt that my bunny was dead! Why was he lying on a bunny? Did he killed the bunny by lying on it? I like my bunny so much! He liked his bunny, too. That’s why he singed bring back my bunny to me, to me!”

Oh. That song. Again with the age-inappropriate content for intended audience. First Rub-a-Dub-Dub, now My Bonnie Lies Over the Ocean. It’s a wonder anyone escapes childhood unscathed.

We talked about My Bonnie Lies Over the Ocean and then I sang it to Rachel—the whole thing—but she’s still convinced it’s about a bunny. 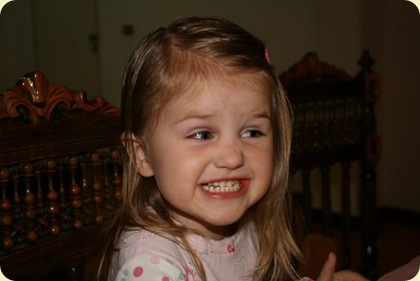 We were having so much fun that Rachel spontaneously announced, “Mommy, you made the best lunch, ever!”

Andrew wasn’t home for dinner today, but he was online, so I chatted to him to gloat a bit.

Okay, so that comment isn’t entirely unprecedented. It’s hard when I’ve been home with the girls all day and Daddy still isn’t home for dinner and I know he won’t be home until past bedtime. Pop corn’s healthy-ish, right? 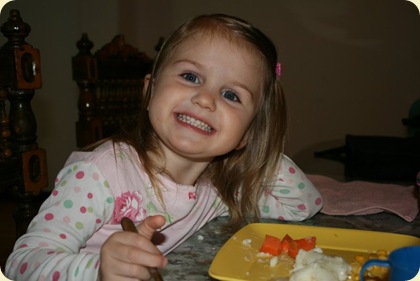