PhD pitfall, a thesis, and a new plan

In a series of remarkable miracles I think we have some semblance of a plan for the next two years. After the crushing blow of not getting into any of the six PhD programs Andrew applied for, we sat down in shock to sketch some more-detailed fallback plans since the only plan B we had in mind at that point was “find a job…somewhere.” That isn’t a great backup plan, if you think about it, which we really hadn’t.

Andrew’s dad asked us to Skype him at our convenience so that he could help buoy Andrew up after this huge disappointment.

“Remember,” he mused, “I was rejected by more schools than you ever applied to.”

Before we called we wanted to make sure we had some sort of a plan to tell him, so it was then that we drafted up our plan.

In a way, getting denied from everywhere was a huge blessing in and of itself. Andrew wanted to be a professor and that was that…until that goal was postponed indefinitely. Only then was he able to step back and reexamine his career goals. We decided we weren’t sure if we wanted him to go straight into a PhD and straight into professorship, or however that channel works.

In searching for how to fulfill the qualifications we were led to consider having Andrew apply for an MPA program—a master’s degree in public administration. The only problem was we had missed the deadlines to apply for any programs by several weeks.

Our friend Nacia had applied to do an MPA at two schools, one of which was BYU, and she joked that since she had decided not to attend BYU that we should just be able to take over her slot. It was a funny joke, but since we had missed the application deadline by about six weeks we were sure it would only ever be a joke.

We mentioned to Reid that we’d like to have Andrew apply for an MPA at BYU but that we’d wait until the following academic year.

However, there is a pretty little sentence on the MPA website:

In the unlikely event that slots become available, late applications may be considered.

We decided to take that sentence and run with it. We knew there was at least one slot available and, having completed his EMPA in 2008, Reid knows several professors in the MPA program and offered to send some emails asking if our application could be one of those considerations.

Truthfully, we were expecting a big, fat no. But to our pleasant surprise we got a yes instead. They asked us to send in Andrew’s resume, letter of intent, and some other documents by April 15, when they planned to meet as a committee to decide on late applicants. As wonderful as this news was, it created a whole new level of stress for us. April 15 was only days away and was also the deadline for Andrew’s thesis.

A worse due date probably could not have been possible.

We got word on April 22nd that Andrew had been officially accepted into the program and were invited to apply for financial aid, scholarships, money, that kind of thing.

Since we had applied so late we, again, weren’t sure if anything would come of it—who knew if they even had any money left to give? But we applied immediately and were told we would have an answer by April 27th.

Oddly enough, that is the same day that Andrew’s thesis defense was scheduled.

He was so nervous for his defense but he did an awesome job! I know because I went, as did Miriam. We were the only other two besides his committee, but it was still cool. He hadn’t really known what to expect and even though both Dr. Kholoussy and Dr. Reimer both emailed him to tell him they thought his thesis was basically amazing he was as nervous as could be.

When he was asked to give a summary of his work his cheeks were flushed and I could tell he was about ready to faint.

But he did a great job and then had some wonderful conversations with Drs. Kholoussy, Reimer, and Anderson. They all loved his thesis and sensed his passion and gave really good suggestions for future research. The only major suggestion requirement that they had was for him to write a conclusion. His current conclusion is like two sentences long which simply doesn’t do his hundred-page thesis justice. I knew it, and he knew it, before they even said it.

I read through his thesis twice—it’s actually quite a compelling read—and when I finished it I was like…wait? What? That’s the end? I want more.

As Dr. Anderson said, “It doesn’t really ever end. It just stops.”

She also encouraged him to isolate sections of his thesis for publication and really seemed to want him to continue researching this topic, which was a huge compliment.

His thesis was so warmly accepted, in fact, that it made it even more baffling for us that he didn’t get accepted into a PhD program.

Andrew was totally pumped up when we walked out of that conference room. Isn’t he handsome? 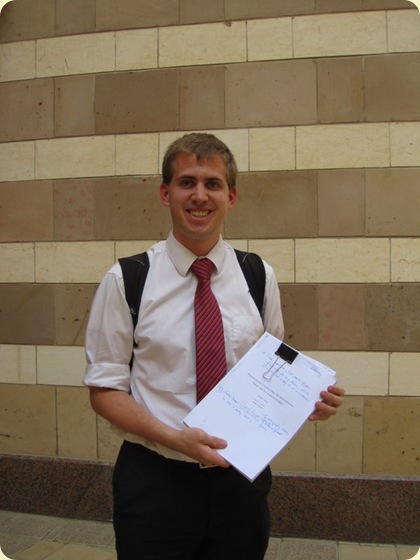 So now he’s working on final revisions for his thesis, we’re looking into possible publishing opportunities for him, and we just got word that he was awarded a half scholarship for the first year of his MPA program, which is a huge and unexpected blessing. He also very likely has a full-time job lined up for the summer, starting immediately upon our arrival—our plane touches down on June 20th and summer term begins on June 21st. Considering we didn’t consult the BYU calendar when we purchased our plane tickets we think things worked out fairly well.

Things are falling into place  so well, in fact, that we are convinced that there are no coincidences. God moves in a mysterious way.

Maybe someday he’ll go off and get that PhD…