A Taste of Asia at SLCC

This morning my mom swung by our house in a BYU van full of BYU students to pick me and the girls up to take us to Salt Lake. Today was the day we performed the Tari Saman at Salt Lake Community College and we had to be there by 10:00 so the Gamelan group could practice and get their instruments set up. At around 9:20 I got a phone call from my mom's phone.

Laughter erupted in my ears. My mom had given the phone to a student (because she was driving) to tell me they were just about at hour house. Apparently everyone in the van thought this was very funny. It kind of was, really.

The girls were excited to get to ride in a big van with a bunch of big kids and were so good on the way up and the entire time we were there. I felt like I brought half the house with me because I wasn't sure what we'd be experiencing while we were away—I brought extra outfits and baby wipes and tylenol and a thermometer and favourite blankets and coats and hats and gloves and lunch and water bottles...

It ended up being too much hud because Miriam was just fine the entire time. She didn't have any accidents and her fever stayed away and she was as cheerful as could be, though lugging those favourite blankets with us proved to be a bonus because they helped the girls behave.

Rachel was very angry when we first arrived and I couldn't figure out what was wrong. When I demanded that she tell me what was wrong or just get over it already she pointed out that they had decorated the stage in Slytherin's house colours—gold and green. I told her that, first of all, Slytherin's colours are silver and green and, second of all, it wasn't a big deal because this wasn't a Harry Potter party—it was "A Taste of Asia" party—so their colour choices in no way reflected their loyalty to Gryffindor. Sheesh.


We first watched the Gamelan group rehearse. Then we rehearsed the Tari Saman. And then we were surprised with lunch—I hadn't realized they'd be feeding us but they had sandwiches and salads and cookies. It was a much better lunch than what I had packed (mostly granola bars and things like that).

While we were having our lunch we got another surprise when two Chinese Lions danced into the room. 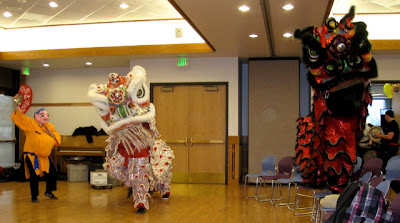 They had been dancing around the school leading people to our room so they would watch the performance—and they did bring a crowd! Rachel and Miriam were at once terrified and fascinated. I was happy to have Josie sitting with us because instead of having both girls jump into my lap (which would have been the case otherwise) Rachel jumped into Auntie Josie's and Miriam jumped into mine. 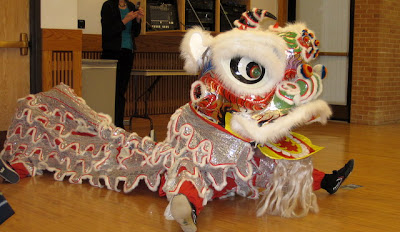 We had to quickly clean our lunch up (we had been sitting on the floor) and moved into our chairs (on the front row) to watch the performance. It was very entertaining.

At one point they put a head of lettuce on the ground and the red lion chewed it up and then spat it out at the crowd. Apparently if you get hit with a piece of flying lettuce you get good luck for a year—we got hit with some lettuce so maybe we'll begin being lucky. I suppose the start of our good luck was that the lions didn't trample our food—there were many close calls.

"They have lions in Indonesia?" Andrew asked.

"Oh, this is a Chinese thing," I said (and Taiwanese and Japanese and Korean but this particular group was a Chinese Lion Dancing Club...or something like that). Then going back to our conversation of Lion Dancing vs. Dragon Dancing I said, "But they have a Dragon Dance, too."

"Yeah. So does Indonesia. They did one at the last Gamelan concert we went to, remember? I'm pretty sure it was a dragon though because they don't have lions in Indonesia."

"Sweetie," I said. "They don't have dragons in Indonesia, either."

Interestingly enough, lions aren't native to China. I guess we should have known that since lions are so strongly connected with Africa and China is obviously not in Africa, but you just never know. I mean, for us bears are strongly connected to the Rocky Mountains so when I found out that Alligator River National Wildlife Preserve (in North Carolina) has what is possibly the largest population of black bears in the east (in addition to some alligators and things like that) we were a little confused. Picturing black bears in the same habitat as alligators kind of blew our minds. But, no, lions aren't indigenous to China.

The story goes that a monk dreamt about a lion and then made a costume and *ta-dah!* Lion Dancing was born. Okay, so there's actually probably more to the story than that, but in a nutshell...that's what happened.

Although many people in China had never seen a lion (when the monk had his dream) people weren't altogether unfamiliar with lions because African nobility would sometimes gift them to Chinese emperors who would use them to guard their palaces.

With that thrilling introduction, the lions departed and BYU's Bintang Wahyu Gamelan Ensemble (that might be redundant since gamelan means ensemble, but whatever) took the floor. I was fairly familiar with the first piece they played.

The second piece, though, was a funeral piece, and I'm not sure if I've heard it before or not. It uses an instrument called the angklung which I don't think I've seen before. It sounded interesting—and (truthfully) exactly what you'd expect dried bamboo to sound like when hit with a stick. Go figure. 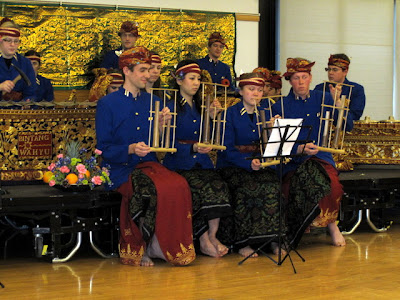 My mom was playing in the back for the first few pieces but she moved up to the front for one of them so I was finally able to catch a picture of her. 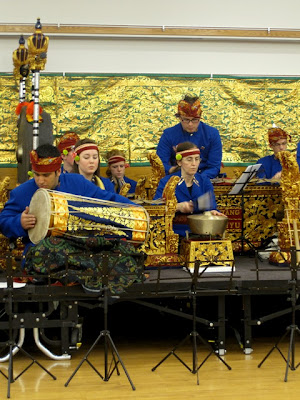 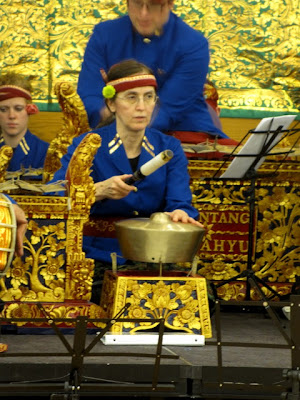 When they were finished with their instrumental pieces it was our turn to dance. My mom, sister, and I are all on the left side—my mom is third from the left (in pink), then there's Josie (in gold), and then me (in pink). I'm the one with the little baby bump (20 weeks today—half way)!

I'm so glad I got to perform that...just learning it was fun but we practiced so hard that the idea of not being able to perform was a little bit sad. Fortunately Miriam's body cooperated and she started feeling better so we were able to go. I'll probably do a separate blog post about Tari Saman because I've been researching a bit online (and my mom has been researching in actual books and scholarly articles (it helps that she works in the Music and Dance Library at BYU)) and have found out quite a bit about it. Stay tuned.

After we had finished dancing Dr. Grimshaw invited the audience to come and learn the Kecak, a dance from Bali. It's a monkey dance and the sounds you get to make are quite monkeyish. And the dance is quite monkeyish. And it's really just fun. The girls and I tried it along with several audience members.

Rachel was nervous about it because she had remembered it from last April—when they actually had the monkey prince and a demon dancing, too. The demon terrified her. Today she kept glancing around nervously while we were sitting in our chanting circles so my mom asked what was wrong.

"Oh, she's just worried that a demon dancer is going to come out."

"There's no demon dancer this year," my mom assured her. "And last year the demon was just Dave."

My mom pointed to a young man sitting a few feet away from us. He smiled and waved. Rachel relaxed a bit but still didn't seem to have as much fun as Miriam (who didn't have the opportunity to be emotionally scarred last year because she was too young to attend the concert).

We all survived Kecak and then were treated to some Indonesian cuisine. My girls had fun going around and gathering up the extra flowers (that the girls in Gamelan put in their hair; and from the traditional offering of fruit and flowers to the Balinese gods) and pretending to be bashful brides. 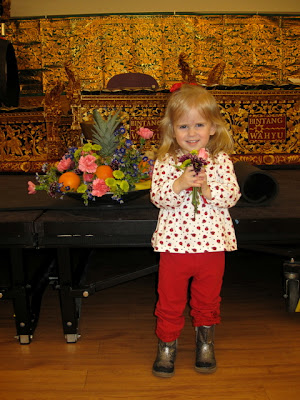 We now have two vases of flowers sitting on our kitchen counter—the girls were just that good at scavenging. 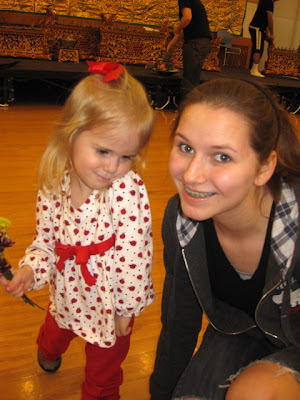 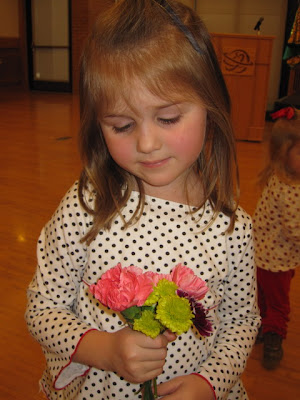 They kept bringing me bouquets of flowers and then I'd transfer them to the diaper bag only to end up with another bouquet two minutes later. 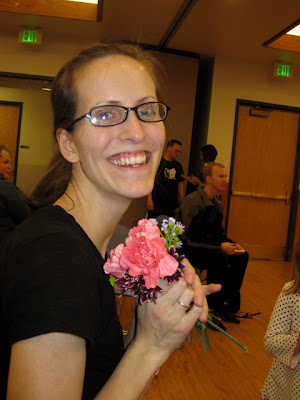 Rachel was so happy that I got to wear a pink costume for the Tari Saman. She wrapped her blanket around her waist and said, "Now I look just like you!" 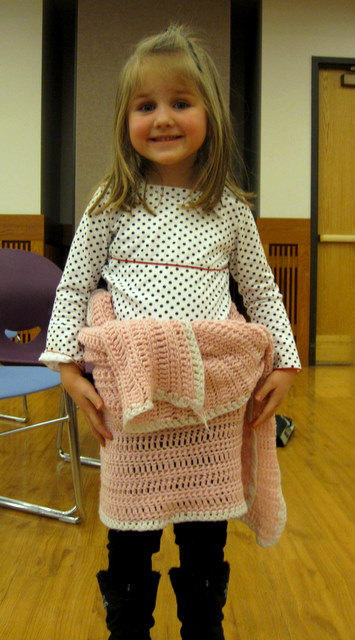 And when we got home both the girls wanted to keep dancing—Miriam went on a wild rampage looking for a skirt and a headband to wear as a costume—I, however, wanted a good ol' fashioned nap so I convinced Miriam to lie down and then put a movie on to keep Rachel occupied for an hour or so. Andrew came home while Miriam and I were napping (and before Rachel's movie had finished) so he was able to keep her occupied until Miriam and I woke up, which was nice (especially so since he usually doesn't get home until after bedtime on Wednesdays).

It was much busier day than what we're used to—not that being a stay-at-home mom is easy or lazy...just that it's a different kind of busy—but I think we all had fun. The girls loved all the music and dancing and food (they fell in love with mangoes all over again—there were trays heaping with dried mango slices...mmmmmmmm) and I love exposing them to different cultures. I just think it's good to learn to appreciate differences at an early age—then you can embrace what's different instead of being afraid of it.
Posted by Nancy at 12:13 AM