Rachel has been worried about St. Patrick's Day since her Leprechaun party at school on Thursday. I don't know why since she came home bursting with gold (chocolate) coins and facts about the holiday.

"So, what did you learn today?" I asked her on the walk home.

"Nothing. We had a party. All we talked about was St. Patrick's Day. We didn't even do worksheets or anything."

"You can learn without doing a worksheet, you know," I told her—she's just used to focusing on a letter each week and doing daily printing exercises but they finished Z a couple of weeks ago so now their curriculum is different, I suppose (though she does need to practice writing her numbers so they could do that). "What did you learn about St. Patrick's Day?"

"Well, you have to wear green or else you get pinched. But if someone pinches you and you're wearing green then you get to pinch them back a million times!"

"That's a lot of times," I told her. "We'll have to be sure to find something green to wear. What else did you learn?"

"You have to go to sleep early on St. Patrick's Day."

"Really? Why?" Anytime Rachel talks about going to sleep early is naturally intriguing.

"Well, my teacher said that bad people come out on St. Patrick's Day and the only way to avoid them is to go to bed early."
"What do you mean 'bad people?'"

"Mom—there are people who drink poisonous drinks on St. Patrick's Day. It makes them go crazy! And if you just go to bed then they can't get you."

"Yes! My teacher said it's called alcohol and it's very bad."


This spurred on a talk about The Word of Wisdom. I told her that while we believe that alcohol is bad, it doesn't mean that people who drink alcohol are bad. In fact, I know a lot of really wonderful people who drink a glass of wine at dinner or a beer while watching a football game and while that's not a lifestyle I choose to lead, I can't exactly condemn them. It's not like they're getting drunk and wreaking havoc around the town. They drink responsibly and in moderation. And if you're going to drink...and while I think (and teach my children) that it's best not to...it's best to do so in moderation.

Our conversation then moved on to who St. Patrick was, himself, and soon we were home. Rachel shared some of her chocolate coins with Miriam after lunch and I thought we'd worked everything out but that night she prayed hard that "St. Patrick's Day would go smoothly and that we['d] all be able to find something green to wear so that nobody would get pinched and that the bad people who drink bad poisons won't do bad things to us."


Repeat the conversation about people living a different lifestyle than we do not necessarily being bad.

On Friday night Andrew had yet another conversation with Rachel about all those "bad people" because she was so scared she was actually crying and therefore couldn't fall asleep but her teacher had told her that she was supposed to go to bed early to avoid the "bad people" and it just wasn't working out and she was doomed, doomed, DOOMED!


I have no idea what her teacher told her but I'm sure it was innocent. Or at least as innocent as the time I accidentally spilled the beans to my primary class that it's possible to make a baby without being married.

Sometimes you say something that you think is just a passing remark and it ends up being turned into the focus of the conversation and trying to dig your way out of it is always a little less graceful than you hope.

Well, St. Patrick's Day came and the girls carefully chose outfits with green on them—we don't have many clothes that are actually green. Rachel wore a dress with pink flowers and green leaves. Miriam chose a pink shirt to go with a pair of green and pink plaid shorts. I wore a green skirt. Daddy wore a green shirt. And nobody had to be pinched (poor nobody).

I spent the morning at the Relief Society Celebration, which I'll likely write about later, and the girls spent the morning with Daddy. When I came home I changed and then we did some yard work before "the big storm" blew in. It turned out to be a mild storm, but I suppose it got crazy later on (like the half foot of snow we got today, for example).

The girls made some leprechauns (from here) and even though Miriam can say leprechaun just fine she prefers to call him her "Jumping Jack Guy."

We went to the library—on either Friday or Saturday...I frankly can't remember—and picked out a lot of books. Most of the books about St. Patrick's Day had already been checked out but we found some Irish fairytales to bring home, which the girls have been enjoying. We also made sure to read Green Eggs and Ham since we had a green dinner (green eggs, green pancakes, apples, applesauce, and bacon...and we made hash browns, too, because this little baby in my tummy doesn't thrive on sweet things). 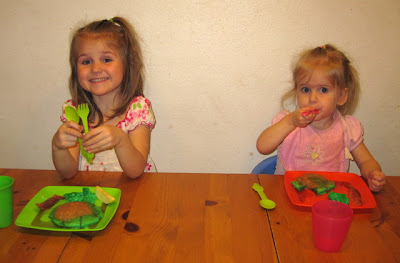 Last night we read one of our fairytales—The Bee, the Harp, the Mouse, and the Bum-clock. I hadn't the faintest idea what a bum-clock was but Rachel thought the title was hilarious—the book we read the story from is an anthology of fairytales so I read a couple of titles and let her choose one.
"The bum story! Read the bum story!" she giggled.
Fortunately, our story said that there was a man with a bee that played a harp, while a mouse "and a bum-clock, which is to say a cockroach," danced a jig, otherwise we would have imagined something different entirely. There weren't many pictures in our book.
Google searches have not definitively pinned "bum-clock" down as "cockroach." It actually says it's a drone beetle (a humming beetle that flies around during the summer months). That seems to be the Scottish meaning of the word though. In Ireland perhaps it really does mean cockroach. I can't find much on it and am satisfied with the answer "a bum-clock is a cockroach." Really, just knowing that "clock" is a term for beetle in that part of the world helps.
The tale kind of reminds me of Jack and the Beanstalk, but only in that there's a boy named Jack who sells a cow off at what his mother deems a very bad deal. (You can read the story here or here).
Today we read a tale that had bulls and giants and dragons and princesses and even trying-on-a-shoe-until-you-find-the-person-it-fits-and-then-marrying-them. It reminded the girls of Sleeping Beauty (the part where the prince slays the dragon) and Cinderella (the part where the princess tries the shoe on every man in the kingdom until she finds the prince). It also reminded me of Ferdinand but that's just because there was a bull in it—the storyline didn't match at all.

And we read another interesting tale that reminded us of Rumplestiltskin. But it was so entirely different that we knew it wasn't the same story—but you could see that the Grim Brothers' tale was certainly a version of the same story we'd read.

They've been very interesting tales to read and have kept the girls' attention surprisingly well, considering there aren't many pictures.

Anyway, it's been a fun little holiday to celebrate. Once we get through our Irish fairytales we'll be moving into Easter stories, I'm sure.
Posted by Nancy at 11:51 PM