This morning everybody slept in, except for Rachel who woke up with her alarm (or "timer" as she likes to call it (it's her preferential way to wake up)) but then instead of getting up and getting ready for school stayed in bed and read. By the time Andrew woke up Rachel had already missed the bus. He got her started on her morning routine before hopping into the shower. I woke up at 8:30 and kind of panicked but he assured me it was alright.

I did her hair and then crawled back into bed.

Miriam woke up at some point but instead of waking me she put away the clean dishes, coloured some pictures and taped them to the walls, and then built block towers on the kitchen table (so that Benjamin couldn't get them). Benjamin and I didn't wake up until around 10:30 (so imagine how the night went).

We did some yoga to get our morning going. I insisted on doing "grown up" yoga, rather than the kid yoga that we usually do, simply because I wanted a nice yoga routine that wasn't based on the alphabet. The children endured my yoga session and when it was done I popped on on of our kid yoga DVDs.

Benjamin claimed his spot on the mat and started dancing to the music (though you can't tell he's bouncing in the picture). A is for alligator, awesome and strong. B is for butterfly, fly all day long. C is for caterpillar, crawling a long. D is d-d-driving and singing this song. *musical interlude* R is for rocking horse. Rickety-rack. Forward and back. T is for Tarzan yell! Do the thymus tap. I can't tell you how long I've had that song memorized—just know that this DVD has been a huge hit at our house since Rachel was Benjamin's age. It was $10. I think we've gotten our money's worth. 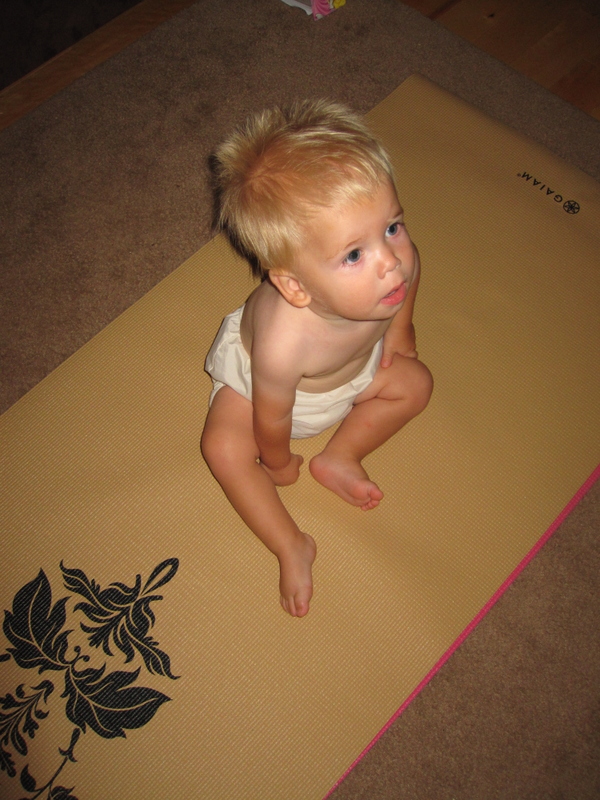 Here's Miriam attempting "the wheel" (also known as upward bow). She's not quite doing it, but whatever she's doing (an upward bow with a headstand (Urdhva Danurasana Sirsasana)) is pretty impressive. 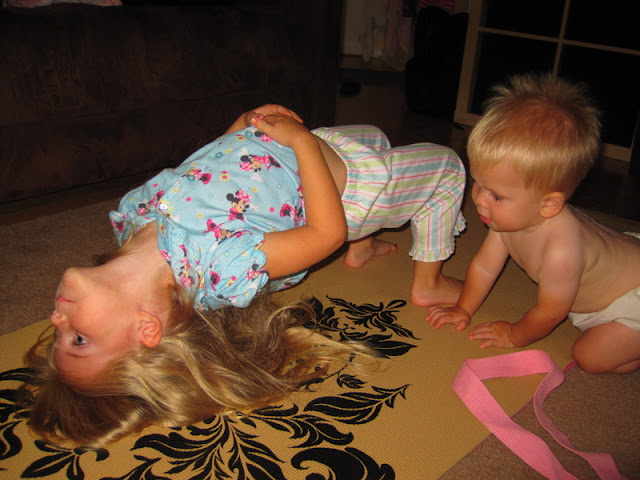 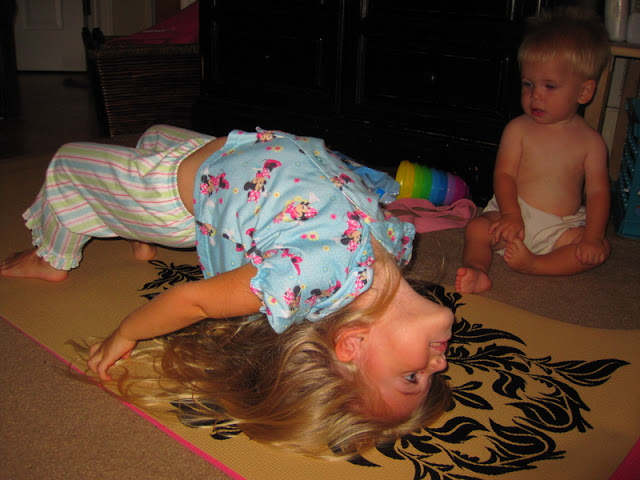 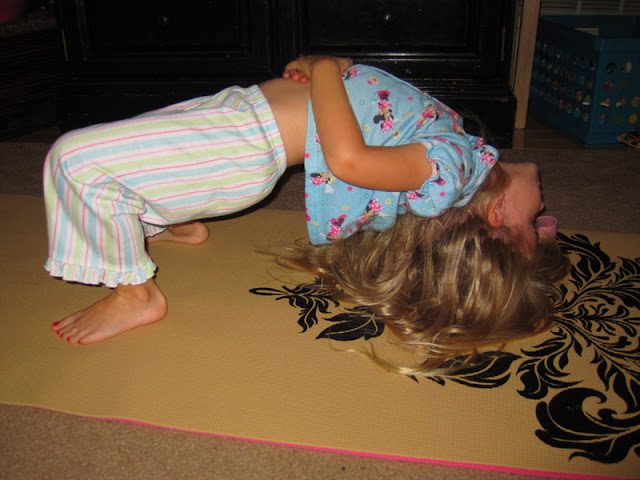 Miriam helped me clean the floors and I helped her make some paper dolls. We had a lovely day at home together.

Poor Rachel, however, ran off the bus in tears. She'd forgotten her lunch box at school and was quite distraught about it. I told her that it wasn't a big deal but she remains unconvinced.

After calming her down, I reminded her that she had a picture submission for the yearbook due tomorrow. She got all upset again because she hadn't thought of anything to draw so we talked about it for a while and she came up with this: 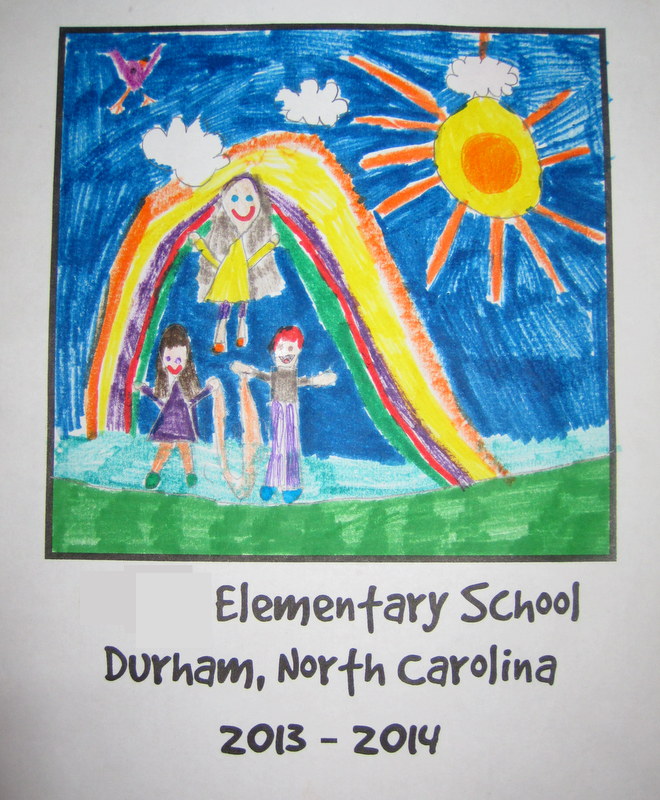 "That girl's got mad jumping skills," I remarked (because...wow). Rachel's favourite part of the day is recess, except that she loves everything else, too. But she just loves making new friends and playing (she plays so hard).

When Andrew came home the girls were still working on their pictures (Miriam had, of course, joined Rachel in colouring at the table) and Miriam told Andrew, "I have mad colouring skills. And I have jumping skills."

"But do you have nun-chuck skills?" Andrew asked.

For dinner I made some pizza muffins, which we packed out to the park for a picnic (along with some peaches). Believe it or not, all that alliteration was completely incidental.

Rachel had wanted to try out the splash pad after Miriam told her about it and we also wanted to find the Vietnam Veteran Living Memorial, which is right by the park. We see signs for it all the time but hadn't ever actually found it (there's not much there; but we did go see it and talked a bit about the Vietnam War (and subsequent wars)).

Anyway, the kids had so much fun playing that they hardly remembered to eat their dinner, which meant that Andrew and I could actually talk while we ate (and not about Angelina Ballerina or The Magic Treehouse or whatever). 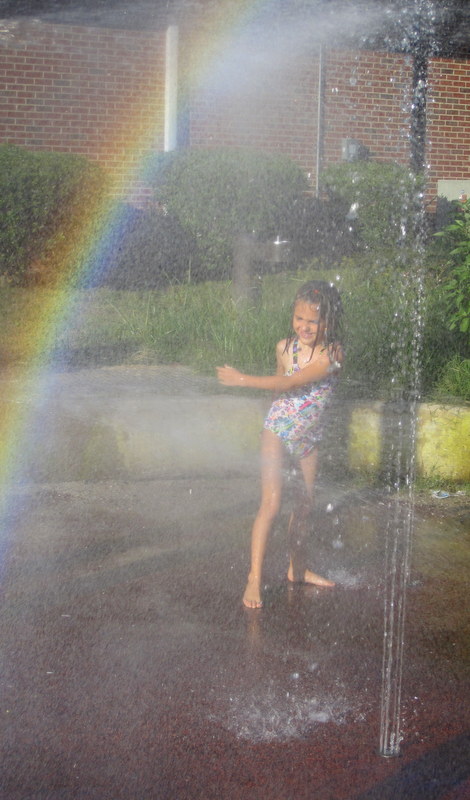 Miriam and Rachel raced back and forth from the splash pad to our picnic table, nibbling little bites of dinner before splashing through the fountains again. 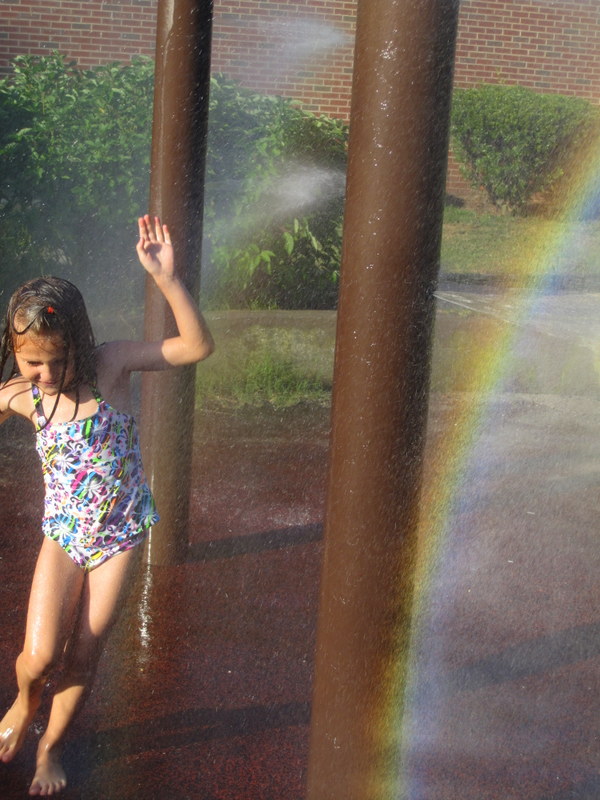 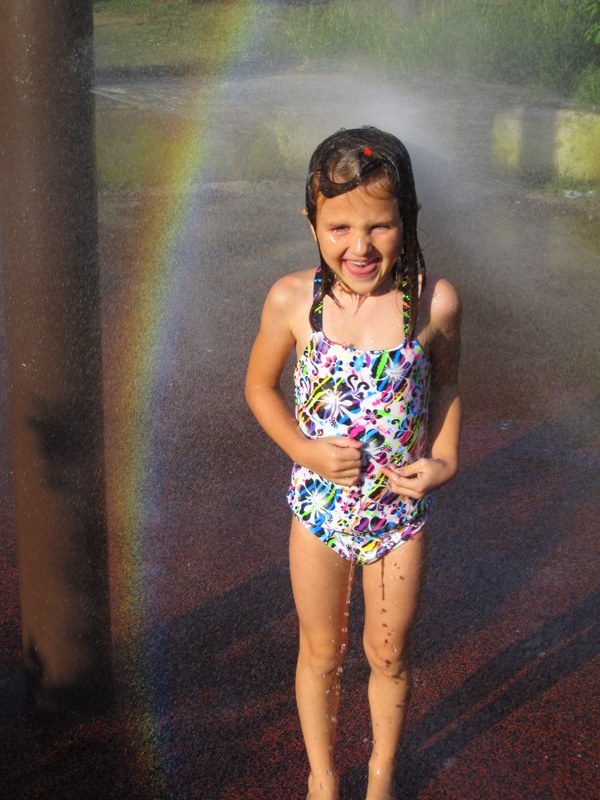 Rachel loved the rainbows that were thrown around in the fountains. 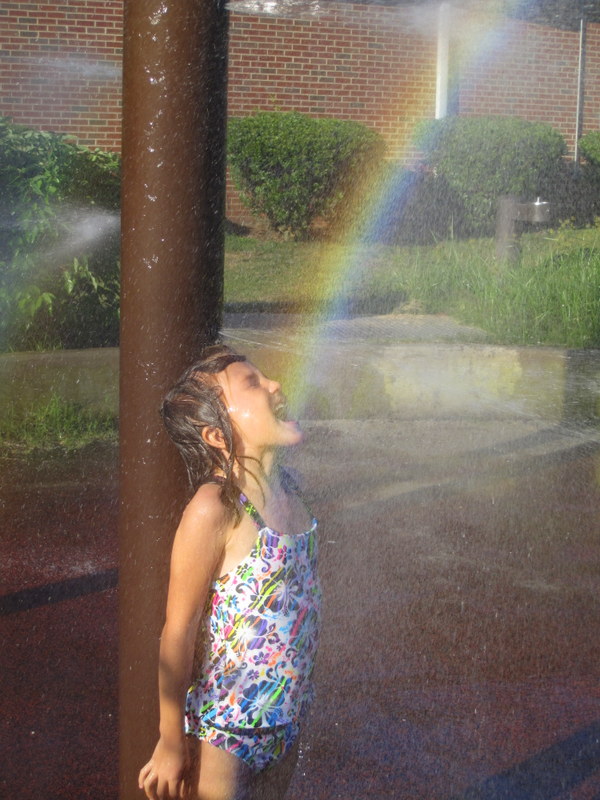 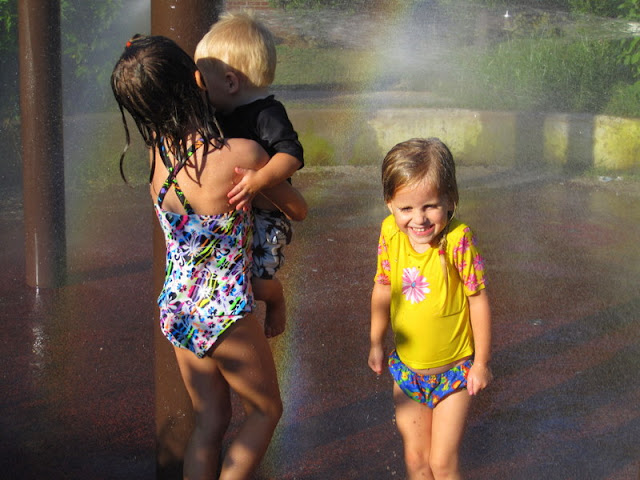 She tried to copy Rachel by "eating" the rainbow but we couldn't quite get it right. 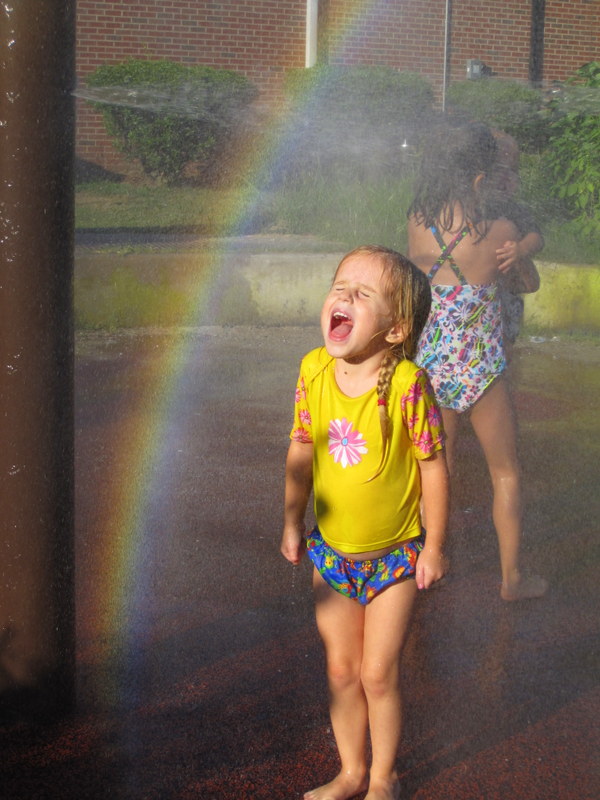 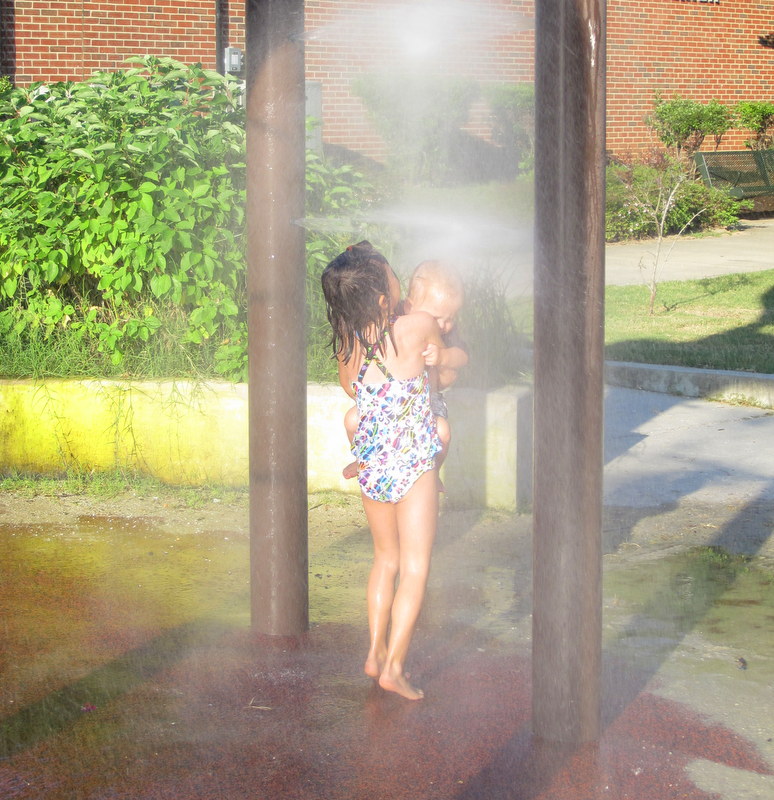 Benjamin wasn't pleased with Rachel for taking him through the fountains against his will and once she put him down he crawled out to me as fast as he could. That's why his picture isn't focused right; he just wouldn't stay still long enough for me to catch a picture of him. But he's pretty adorable anyway. 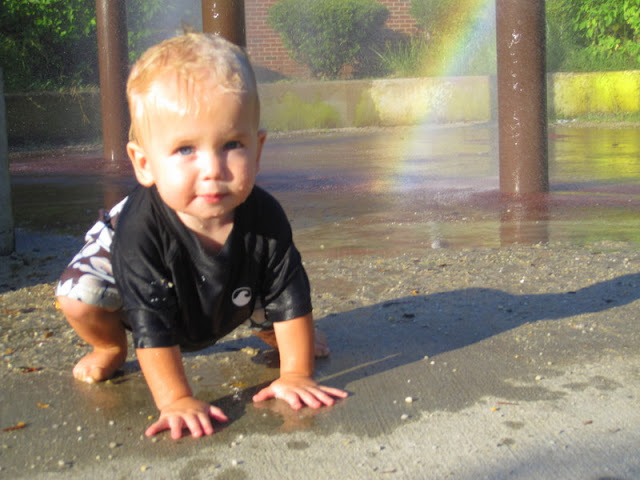 Once it was too shady to play in the water, the kids moved on to the playground where Rachel finally conquered the monkey bars (something she's been trying to do for years). 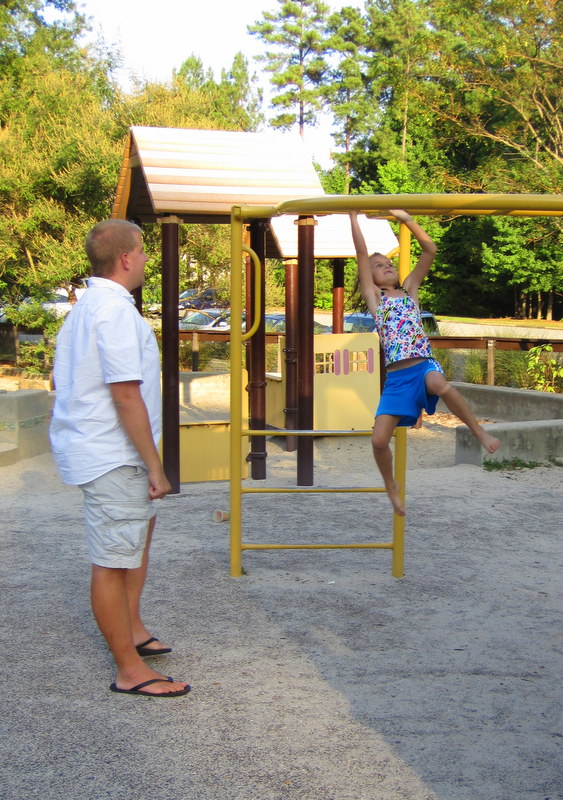 Both Benjamin and Miriam were very impressed and sat, awestruck, at the top of the twirly slide, watching her monkeying her way across the bars. 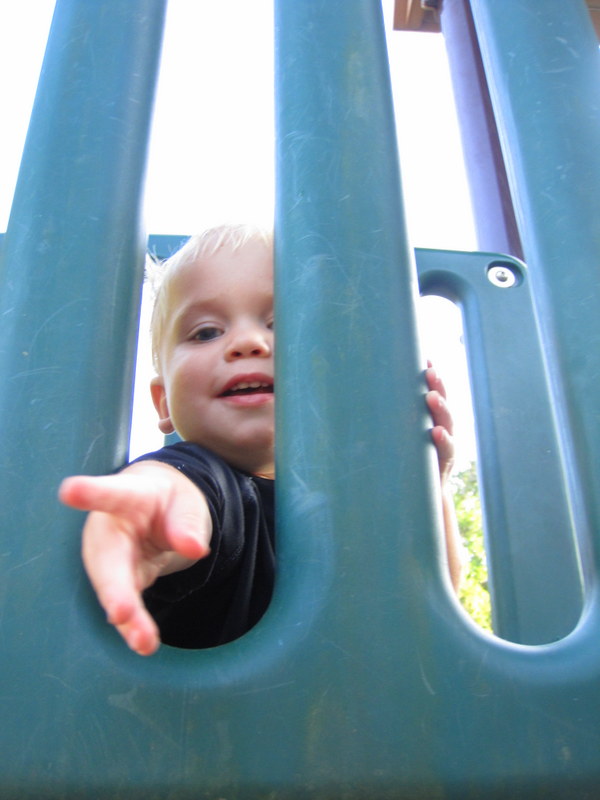 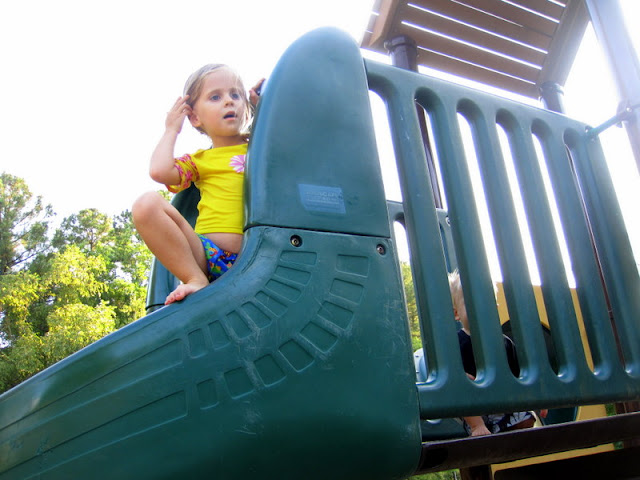 She was on fire! 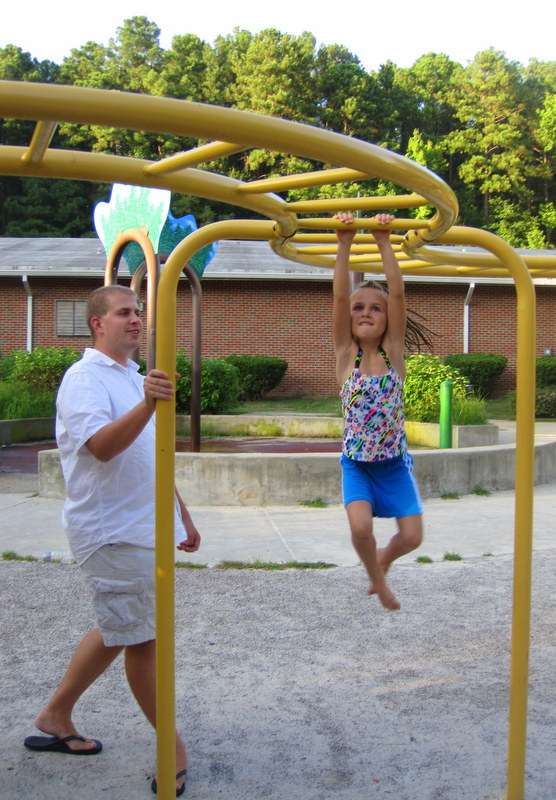 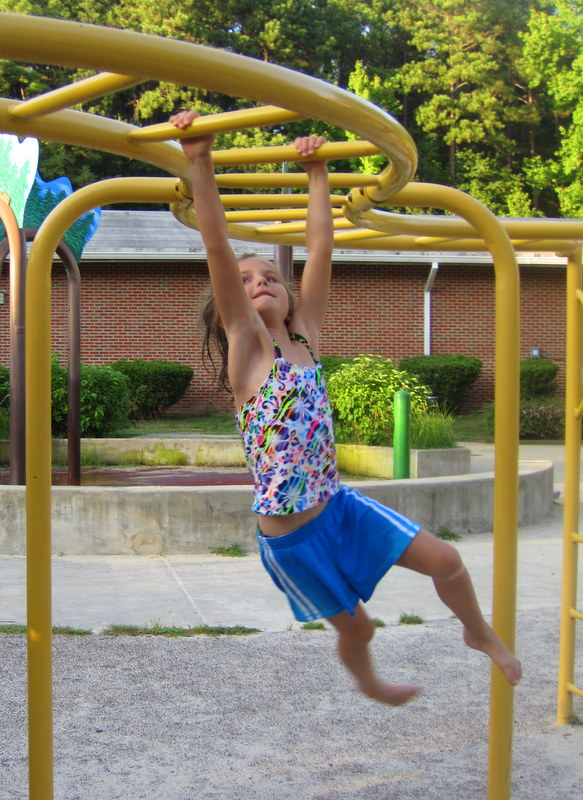 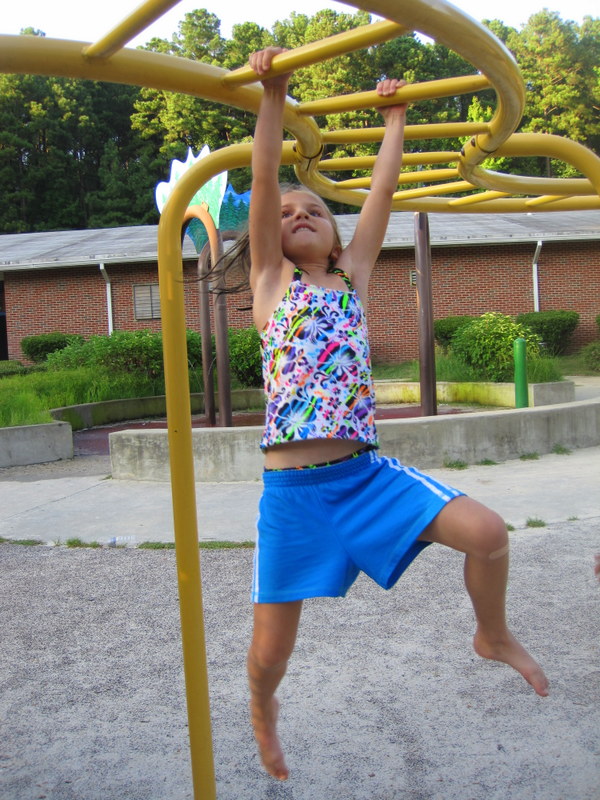 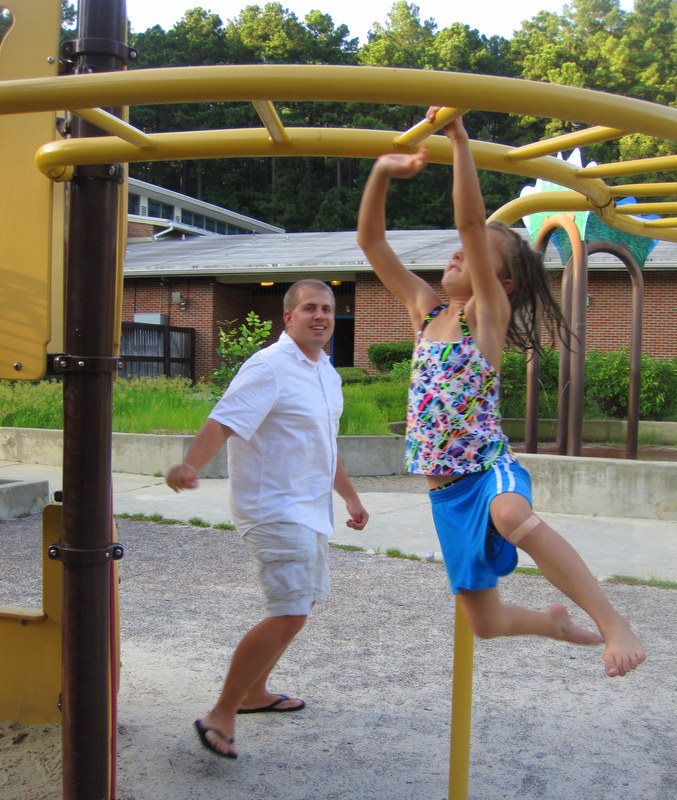 It seemed like everyone on the playground was cheering her on. That might be because the only ones at the playground were us and this kid (who was whooping and hollering and clapping his hands for her). 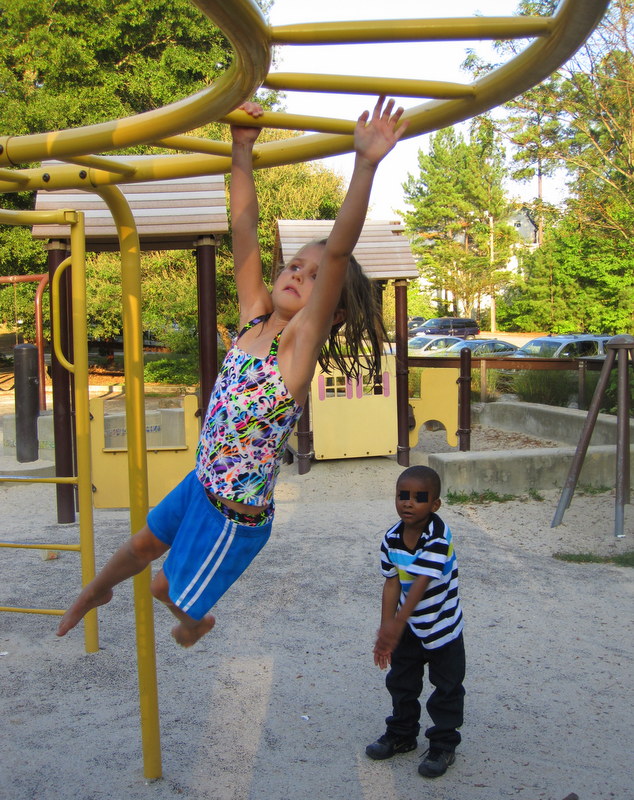 I used to love the monkey bars. Rachel had me show her that I can still do them, though it just wasn't the same as when I was a kid. To hang from the bars I had to bend my knees, which meant that I couldn't get much momentum because I couldn't swing my body as well as I could have if I was her height. I suppose it's kind of like going down a slide that's too small for you—when there's no time to gather any momentum because by the time you get your legs on the slide your feet are already at the bottom. Oh, well.

It was a fun excursion that still had us home in time for bed.
Posted by Nancy at 11:17 PM