Miriam loves playing with Kit. Hardly a day goes by that she doesn't get Kit down/out to play. Both Kit and Rose (Rachel's doll) sleep in a doll bunk bed next to the girls' full-size bunk bed because now that Miriam has a doll all of her own Rachel's beginning to play with dolls more. I'm actually quite happy about this because I think playing with dolls is as important as engineering toys (which is why Benjamin is free to push the hot pink doll stroller around and why the girls play with hex bugs and toy trains).

Aside from her love of Baby Norah, Rachel hasn't ever shown an interest in dolls. Until now.

Still, Miriam (who, incidentally doesn't have a "favourite" doll that she can't sleep without) has always shown much more interest in the "nurturing" games that dolls inspire. She loves dressing, feeding, nursing, changing, rocking, and playing with baby dolls.

Yesterday Miriam, influenced by the American Girl Doll catalogue we received in the mail (addressed to the girl who lived here before us), picked out an outfit that she thought matched Kit's outfit so they could be twins for the day.

Kit accompanied us to the playground after school. 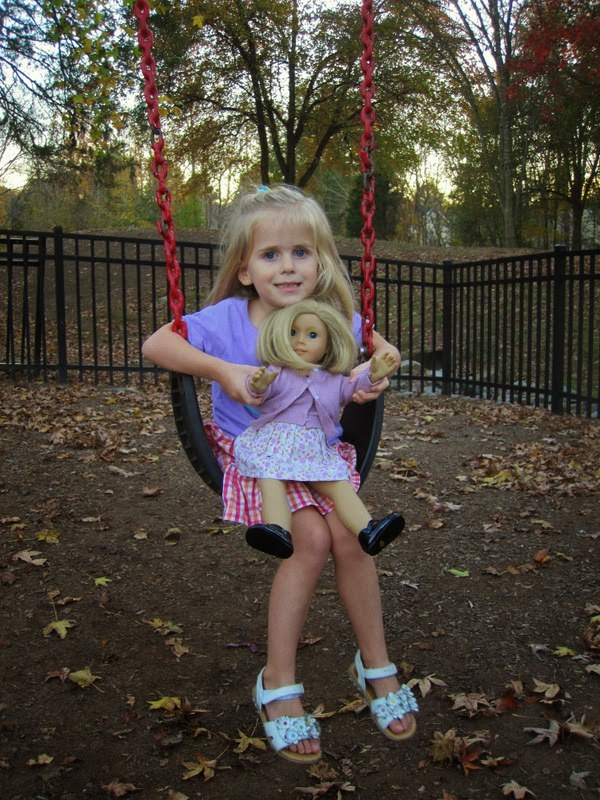 Along the way, Miriam said, "Mom, there's just one problem with Kit."

"Kittredge," I informed her. "I don't know why her parents named her Kit Kittredge, but she's fictional character so I suppose it'll do."

"Kit Kittredge," Miriam smiled. She repeated the name over and over until we got to the park. And now sometimes she'll call the doll Kittredge (rather than Kit). She thinks Kittredge is a prettier name than plain, ol' Kit, which reminds me of A League of their Own, a movie I quote to my children all the time. The quote that I use most often is: "There's no crying in baseball!" Except I insert whatever verb/phrase I want in place of 'crying.'

"There's no spilling milk in baseball!"

"There's no fighting in baseball!"

"There's no whining in baseball!"

"There's no story time in baseball!"

"There's no teething in baseball!"

My kids know that line foreword and back. And they use it all the time, too.

Anyway, the girls had fun at the park playing with Kit (Rachel didn't bring Rose because she rode her bike). Kit got to swing and slide and ride the bus to school.

I think this picture is so funny. Miriam had just decided to move Kit so that Kit's legs were also down the leg holes (rather than just holding her). 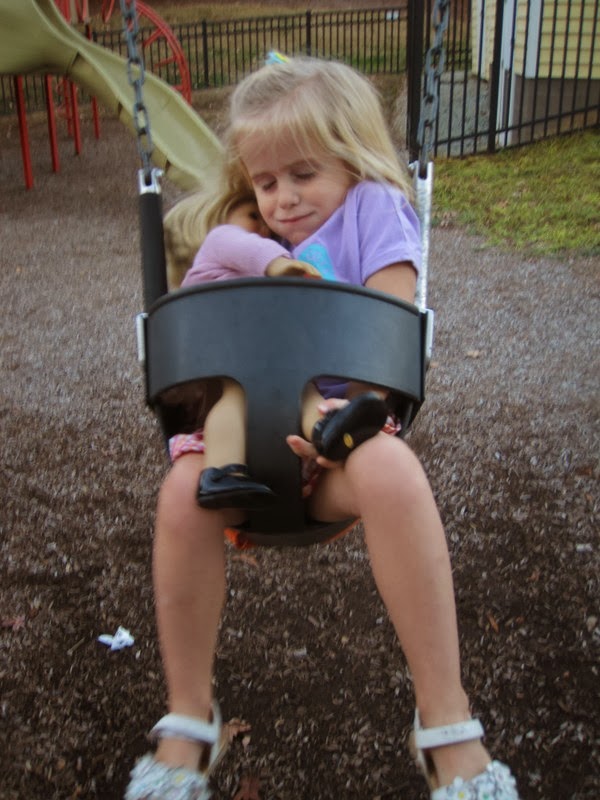 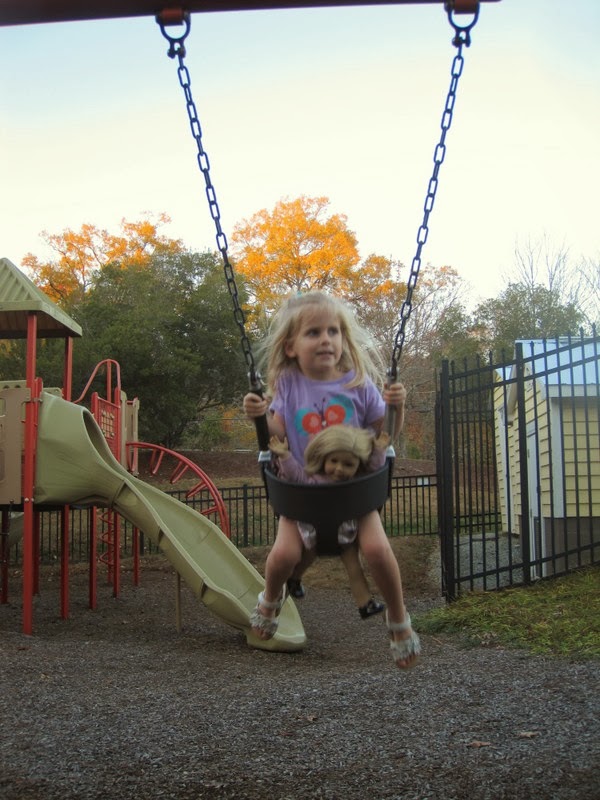 And here they are showing off their matching outfits: 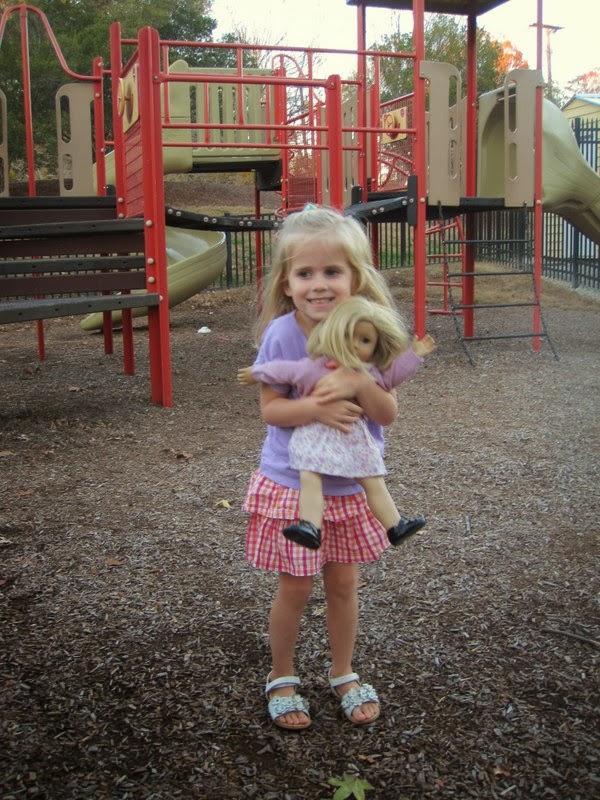 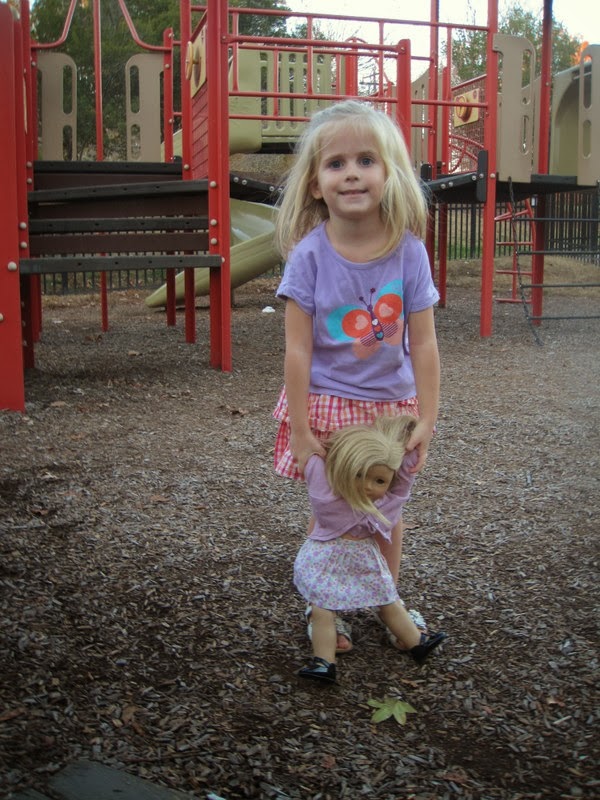 And here's some photographic evidence that Rachel came, too: 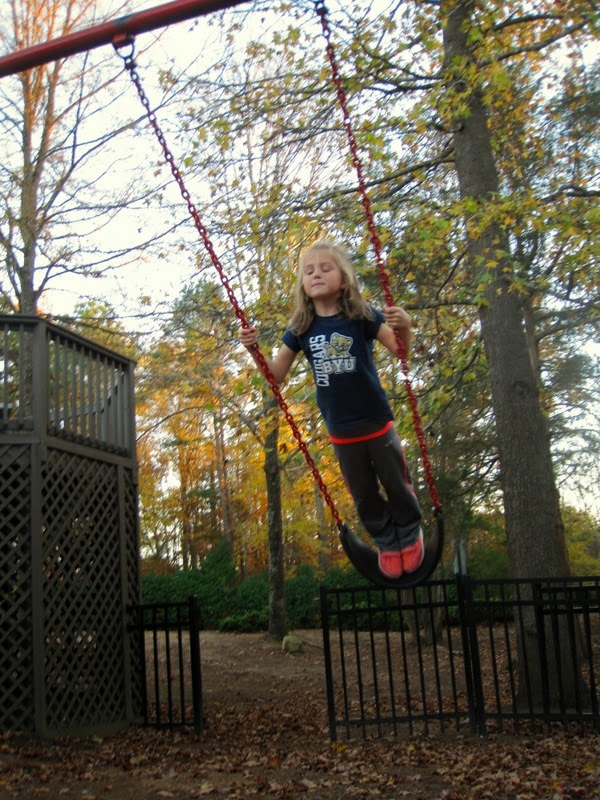 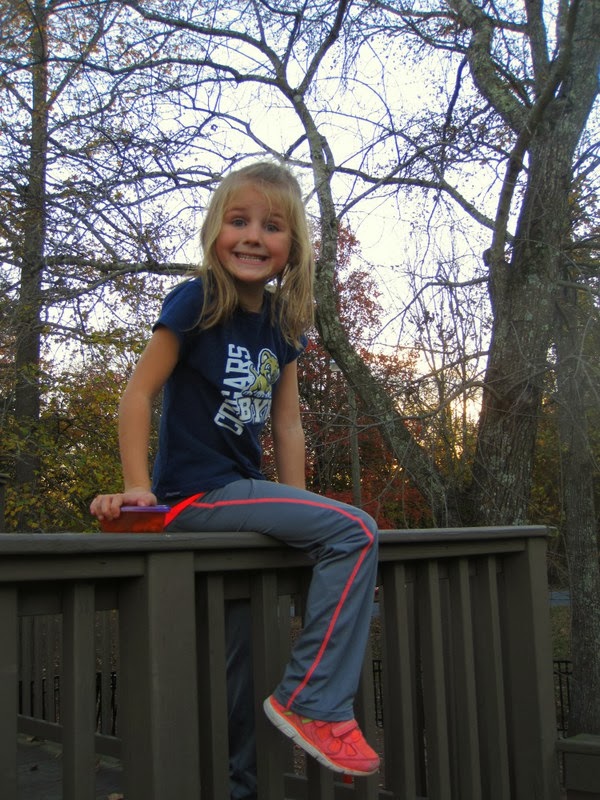 And Benjamin, too, of course: 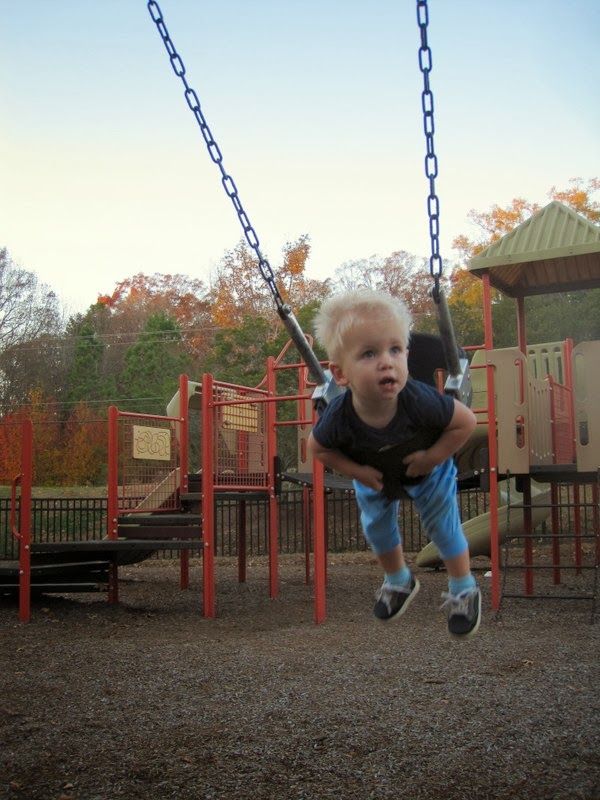 He's getting so independent at the playground! He'll scramble all around the play structure, he'll go down any of the slides, but his favourite past time is jumping on the bridge. The bridge makes me nervous, though, because while it's virtually impossible for him to fall off any other part of the playground, the bridge is pretty much open on either side.

There's a railing, but he's so short! It hits him at his chin at the ends of the bridge but at the middle of the bridge it's over his head, so there's nothing to keep him on that thing—and it's suspended several feet above the ground.

I try not to hover to much when he plays, but at the same time I want to be right there to keep him from falling off to his bone-breaking peril. So I hover a bit.

I'm not really opposed to broken bones, but I think it would be awful to have a baby with a broken bone. I broke my arm when I was two and my mom said it wasn't bad because baby bones heal so quickly, but I think that babies are hard enough work as it is without adding anything else tricky to the equation. I'm not ready for a broken bone yet, at least not for Benjamin.

I was just thinking about what-if-Benjamin-has-a-food-allergy?! He goes around eating everything! All the time!

He picks food up off the floor (like at church—he's always cruising around to see what previous babies have left behind for him to munch on), he's alway's begging people for bites (and batting his long, luscious eyelashes at them until they give in), and his basic motto in life seems to be "if I can touch it I can taste it." I don't know how I'd ever control what went into his mouth (and I know he has no self control).

So let's all just continue to hope that Benjamin's not actually allergic to anything ("How long can you delude myself?" you ask. "Innocent until proven guilty," I say. I don't know he's allergic to anything and therefore...he might not be.) and that he'll stave off on breaking any of his limbs until he can at least talk!
Posted by Nancy at 12:53 AM