Rachel came home with a certificate stating that she'd been selected as student of the month for November. We're not entirely sure how selections are made or what it even means, but she was sure happy about it! 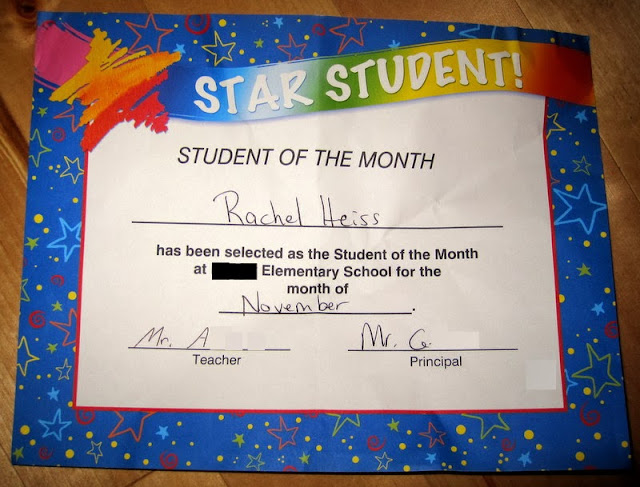 She also brought home a motley collection of prizes that she got to pick out of a box. For herself she picked out a "Blockbuster Promotion" toy from 1998 (The Cowardly Lion) and for Miriam she picked out a book from Chick-fil-A called Aslan (which, curiously enough, was published in 1998).

They're absolute relics but she was so proud of her prizes—and most especially to present one to Miriam.

I love that my girls are usually pretty good about thinking of each other. They're pretty good at sharing when they get something special and when they don't split it 50/50 they're typically good at graciously receiving whatever they're granted. They enjoy picking things out for each other and sharing what they have.

I'll just sit back and enjoy this stage while it lasts because we've been through the selfish don't-touch-my-stuff stage before and I'm sure we'll be back there again. But for now they're at a sweet spot in their relationship and I'm going to relish it!
Posted by Nancy at 10:50 PM