This morning the kids went visiting teaching with me. The woman I visit teach has a little boy Miriam's age and a baby girl (who Benjamin finds fascinating). Benjamin was in heaven in their toy room, which had more cars than dolls (something he found both unusual and awesome).

Don't get me wrong, Benjamin loves dolls. But he also loves cars. A lot. And they have a lot more cars than we do. Benjamin picked out an armful of cars when we were leaving and though it was quite unreasonable for me to tell him to put them back. He threw himself on the floor and sobbed. He kicked and screamed as I carried him out the door. And then he saw a squirrel and forgot all about wanting those cars.

He's got cars at home, anyway.

This afternoon he was wheeling around the house on his ride-on car ($5 on Craigslist (thank you, Craigslist)) while carrying a little car in his mouth. He needed both hands to steer, evidently. 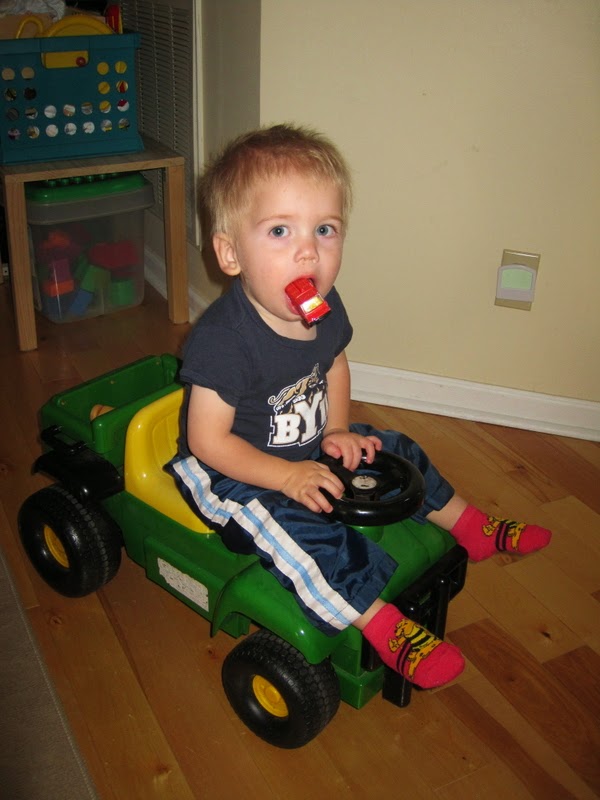 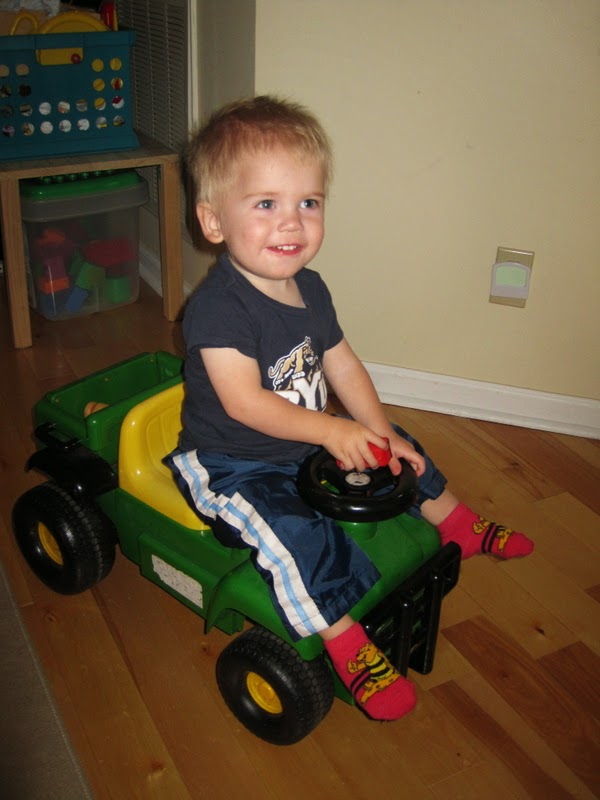 Tonight before bed he wanted me to read him See Me...Go! ($1 at the Dollar Tree six years ago (we've certainly gotten our money's worth out of this book)). His favourite page (de jour) is the bus page. He even pronounced every phoneme of the word for once (he said bus rather than buh!) which was extremely exciting for me. (Benjamin was in the middle of pulling his face out of the page in the single picture I got without a weird reflection in it—sorry. All you get are weird-reflection pictures). 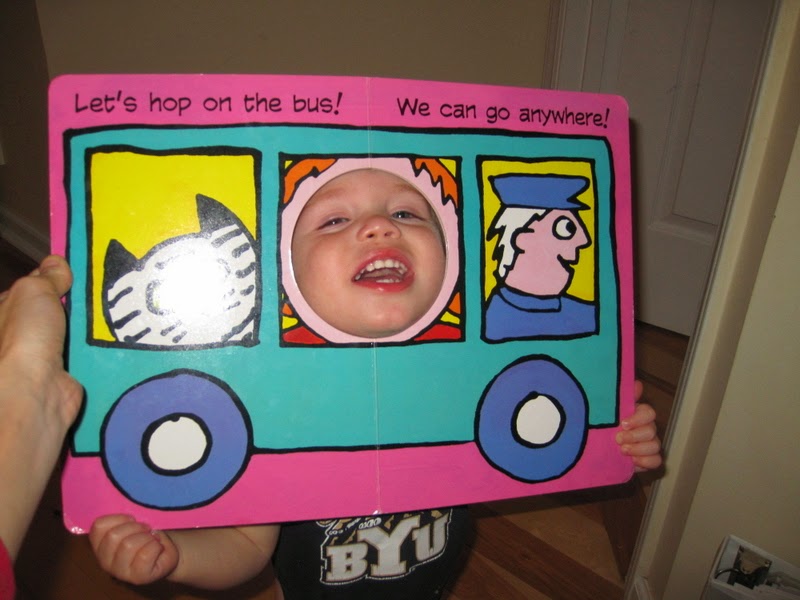 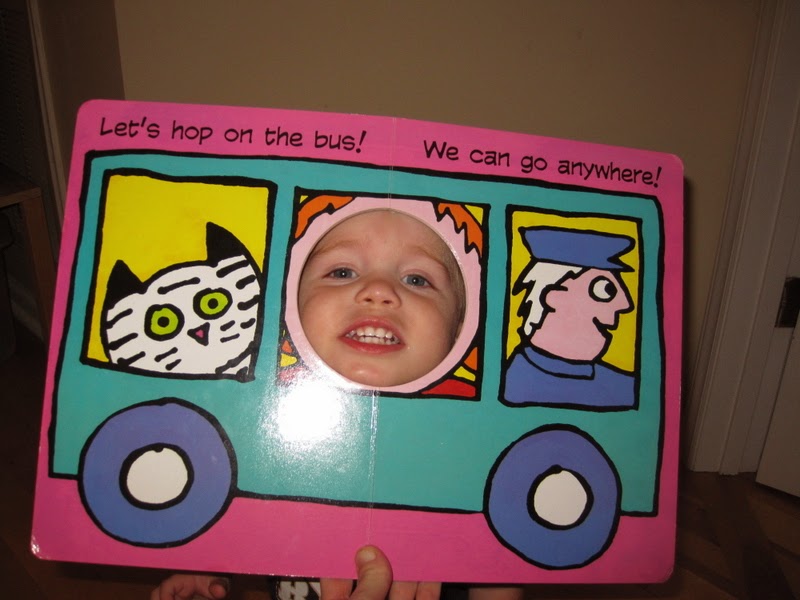 I don't know why I was thinking about the prices of these things. I guess it's just that sometimes something totally cheap can bring a lot of joy to our children (so I'm looking forward to Trading Tables at the end of this month—nothing's cheaper than free)! We once spent 97¢ on a rip-off magna-doodle that entertained Rachel and Miriam for years until we lost it at church on Sunday and never found it again, though we have replacement magna-doodles (yes, plural) now.

My mom got one for Miriam's birthday when she turned one after noticing how much the girls struggled taking turns with our original. And once the original got lost we had to then buy a new one, though quite unfortunately we couldn't find one for the same price ever again.

Anyway, here's a picture Miriam took yesterday of some playtime. She'd just finished making a Christmas tree (that pyramid-shaped creation near the middle of the picture) and wanted to preserve the memory forever. 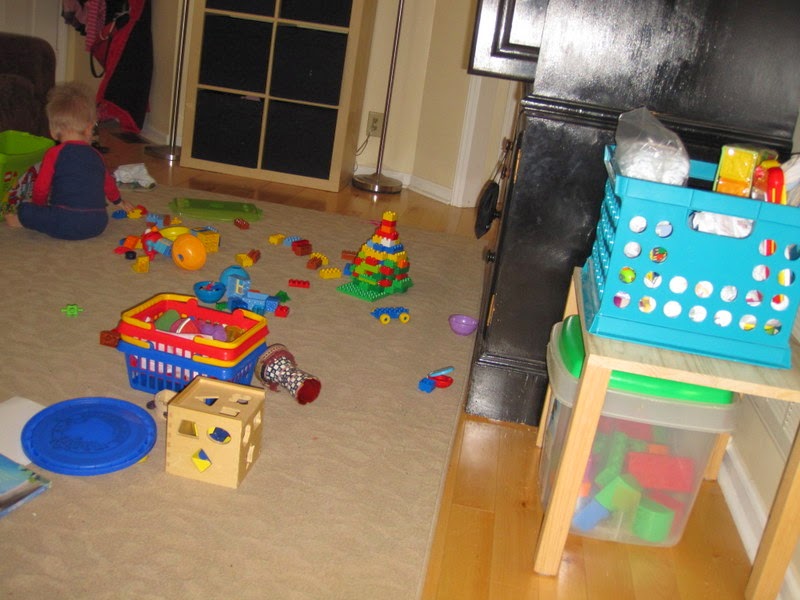 When Benjamin noticed she was taking pictures he turned around to give the camera some cheese. I feel like Miriam's been a little underrepresented here lately. Rest assured she's still kicking around, doing her thing. Her lips are chapped right now and that's been bothering her. After I asked her to finish getting ready for bed this evening she whined, "But Mom! My lips are just always, always chappy so I can't go to bed!"

"Then go brush your teeth, go potty, put some Chapstick on, and then get into bed," I said.

She came back with her face looking like this: 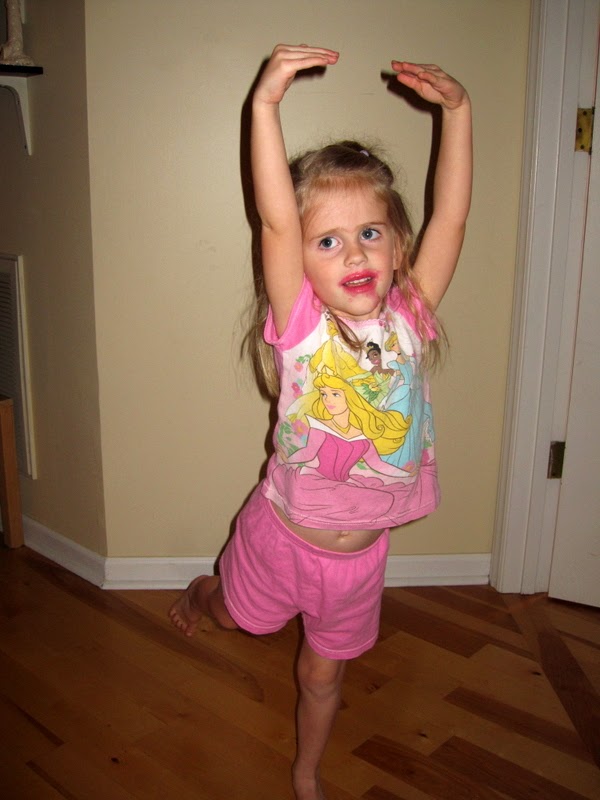 Apparently she'd found some berry-flavoured Chapstick somewhere and applied it quite liberally. Berry Chapstick, however, is better than what Benjamin found.

Miriam had been crafting this afternoon while Benjamin napped (she's decided she wants to make Easter cards for everyone (I think she made three today)) and so she had the box of scissors and glue that is usually kept out of reach. It didn't get cleaned up and we moved on to an afternoon of playtime outside (including a family bike ride).

While we were making dinner and tidying up, I heard Andrew call out, "No! No! No! Benjamin! Stop! That's not Chapstick!"

Benjamin had found a glue stick, uncapped said glue stick, and was ready to begin smearing it on his lips.
Posted by Nancy at 12:37 AM