Because I'm crazy I agreed to visit Duke campus today. My theme song has shifted from "waddle, waddle" to "everyday I'm shufflin'". I started out at an okay speed but by the end of the afternoon, I was struggling.

The entire campus seems to be under construction right now. The chapel is closed (for the next year, I think) so we weren't able to go inside, but we took a picture outside. 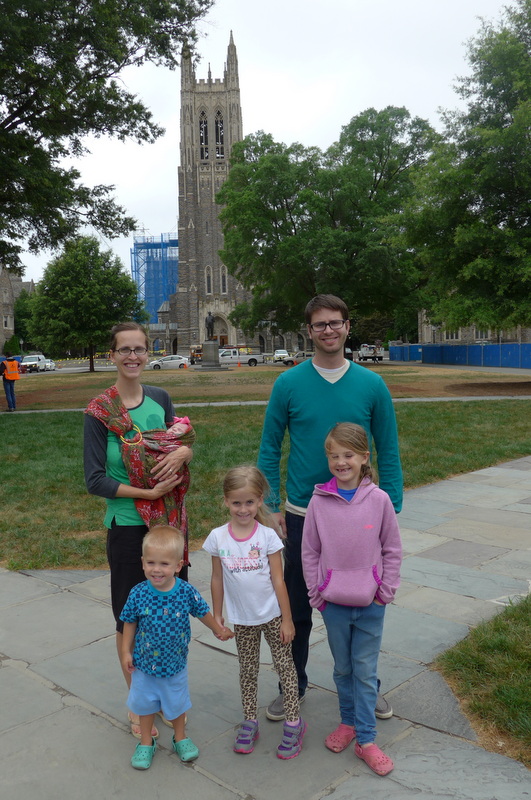 Oh, we checked Rachel out from school so she could spend the afternoon with us. She was crying yesterday about how unfair it is that everyone else gets to play with Uncle David while she's stuck in school all day. I didn't feel too bad about letting her skip school because we're in the final inning and the last weeks of school are a bit of a joke...in the younger grades. According to Rachel, they've been having hours of recess while the older kids are taking their end-of-grade tests (they want the school quiet so the kids can focus on their exams (it's all very serious business, I'm sure)).

We had a lovely time wandering around the gardens. 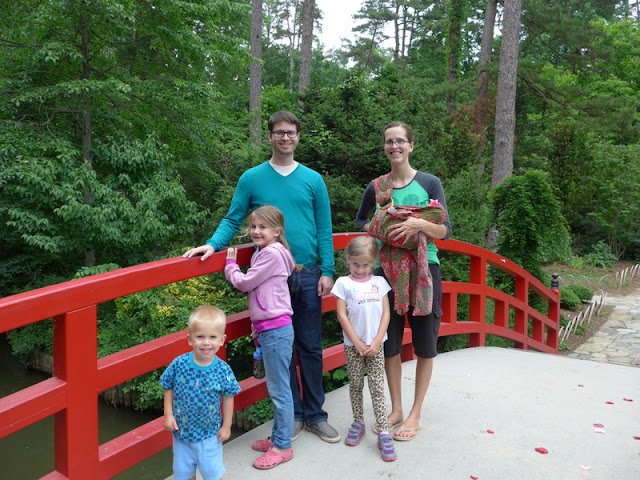 Benjamin was so funny about crossing bridges. He was perfectly fine if there was a railing but if there wasn't a railing he'd get stage fright. His feet would freeze up and his knees would start knocking and he'd call out, "Hey! Hey! Somebody help me! Hold my hand!"

The bridges without railings were never very perilous, but it's nice to know he's got a fear of ledges. It seems like that's a healthy, life-preserving fear for a three-year-old to have.

By the end of our time, though, he conquered his fear. He followed his sisters on an unchaperoned exploration expedition while the grown ups sat and rested (and/or fed the baby). The girls got to this bridge and bounded across but Benjamin panicked. He came to a screeching halt and looked behind him for assistance, but no one was there. His face twisted up in anguish as he realized how far behind his sisters he was falling. He took a deep breath and put one foot on the bridge. And then he just kept going. By the time his sisters had realized they were missing Benjamin and turned around to find him, he was just about across the bridge. He was pretty proud of himself. 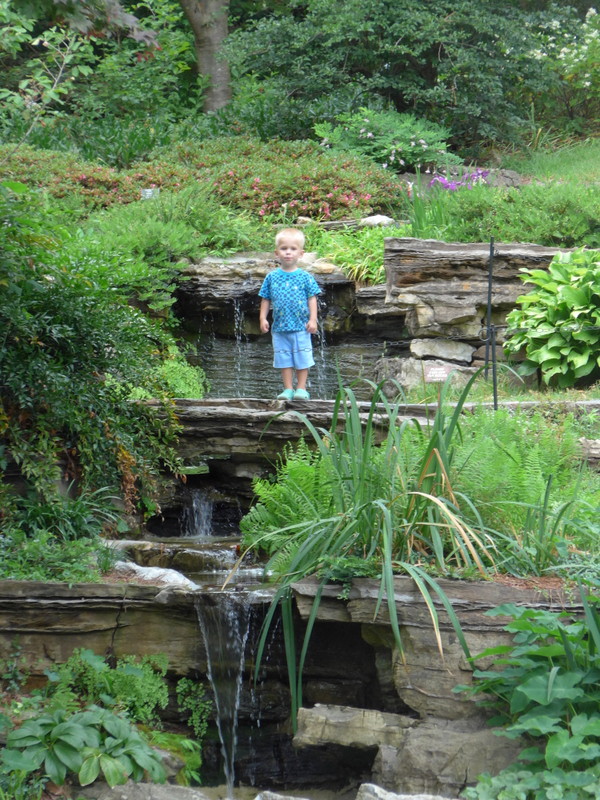 Here are all the kids on the bridge...except for Zoë. Now I don't know what to call anybody. It used to be Benjamin and "the girls" or just "the kids" but now there's Zoë throwing everything off. Anyway, she wasn't on the bridge; only the older kids were. 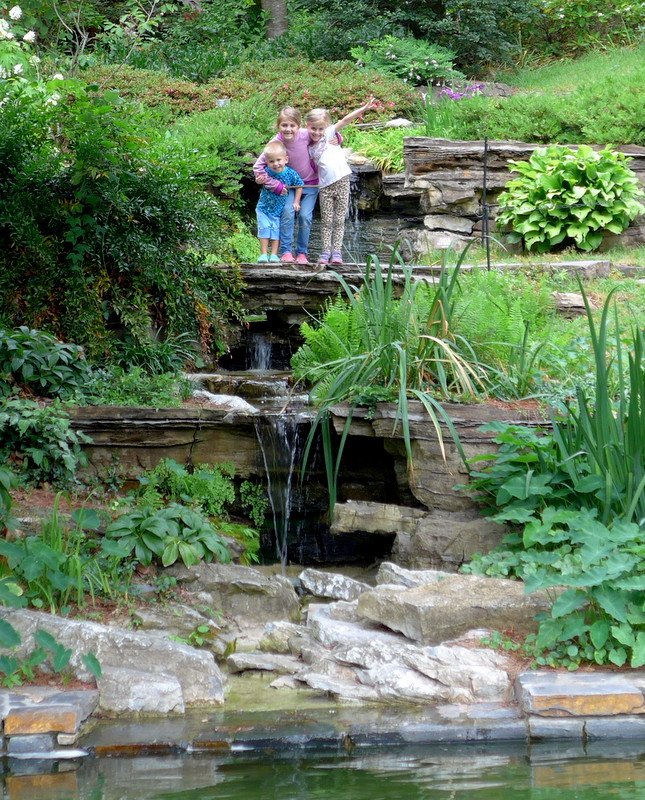 The kids came to check in with us (even though we could see them from where we were sitting) and we let Rachel take the camera with her on their next adventure. She had fun making Miriam and Benjamin pose and snapping selfies and twofies.

A portrait of Miriam, by Rachel: 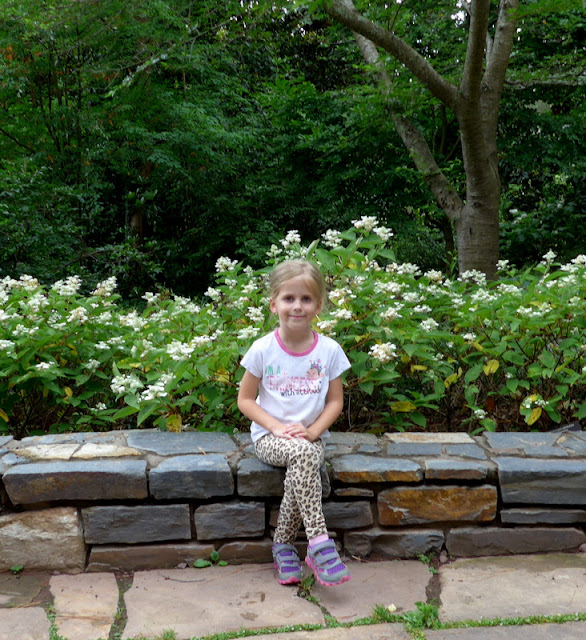 Self portrait with Miriam, by Rachel: 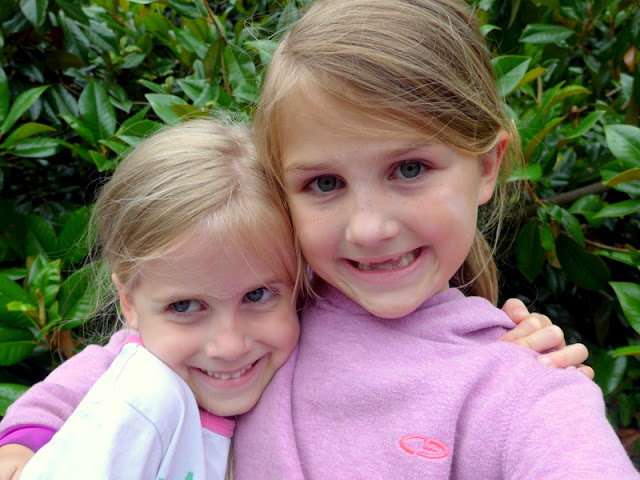 A portrait of Benjamin, by Rachel: 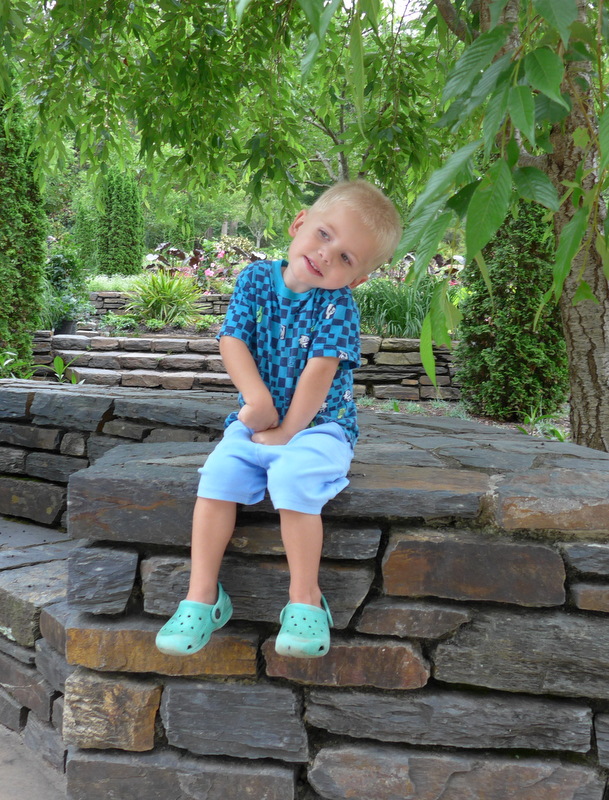 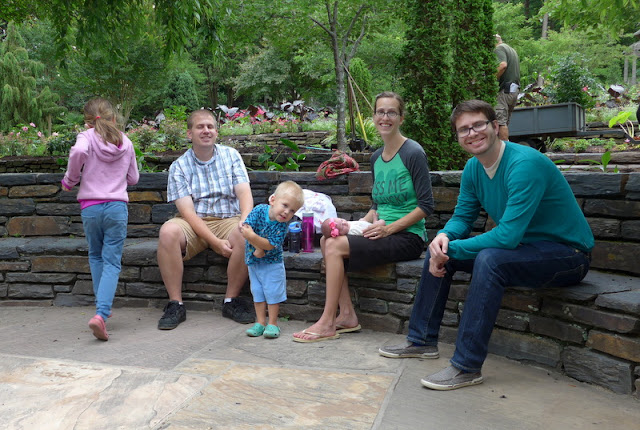 Here's sleepy Miss Zoë by some pink flowers of some sort (photo by Andrew): 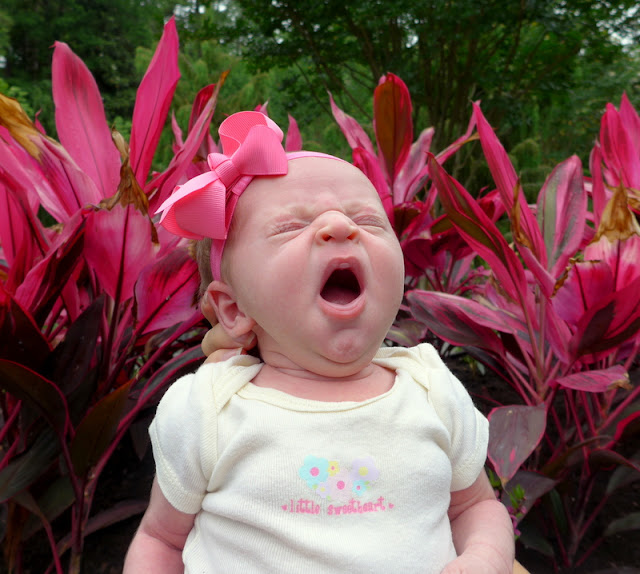 Andrew and David think this will be an embarrassing picture for her years down the road. I say (and my opinion reigns supreme in this instance) that baby yawns are among the most adorable things on the face of the planet; there's nothing to be embarrassed about!

Here's David with his three little nieces (our other nieces aren't so little anymore—Rosie graduated from high school this year, for example): 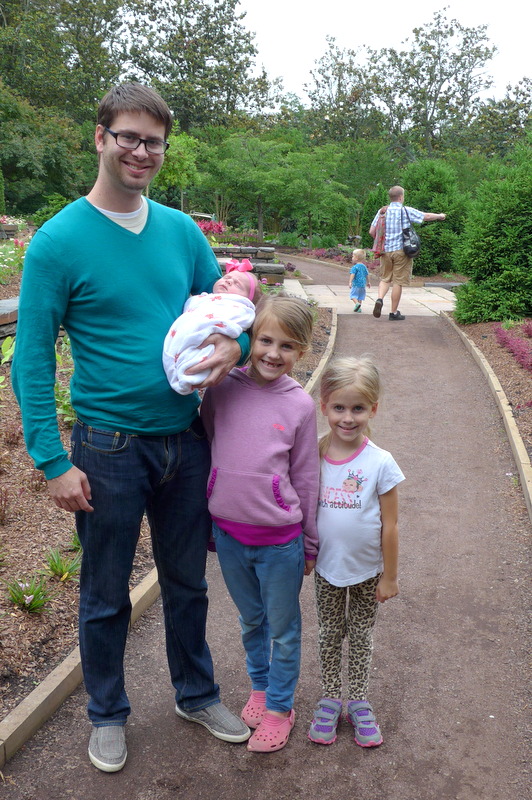 This bit of the walk was the easiest part for me. As you might have noticed, Andrew is carrying the diaper bag and David is carrying the baby. All I had to do was keep up and hold Benjamin's hand: 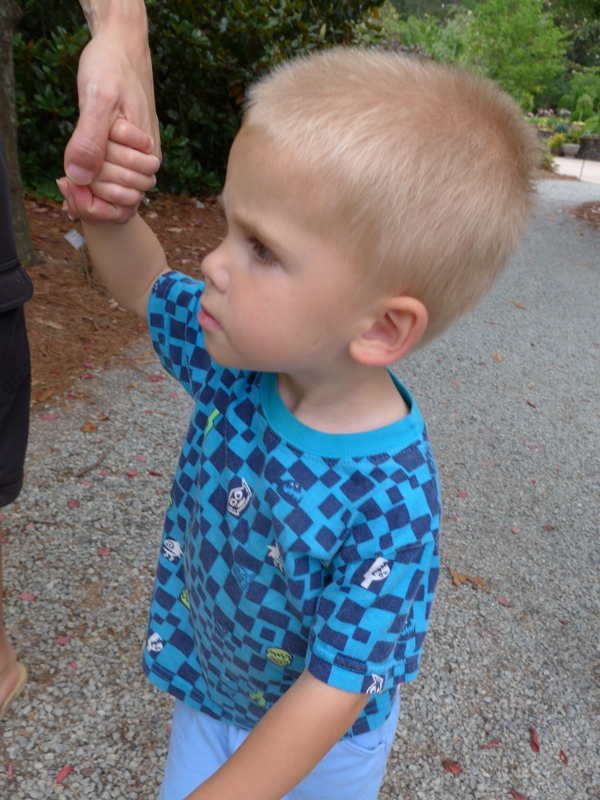 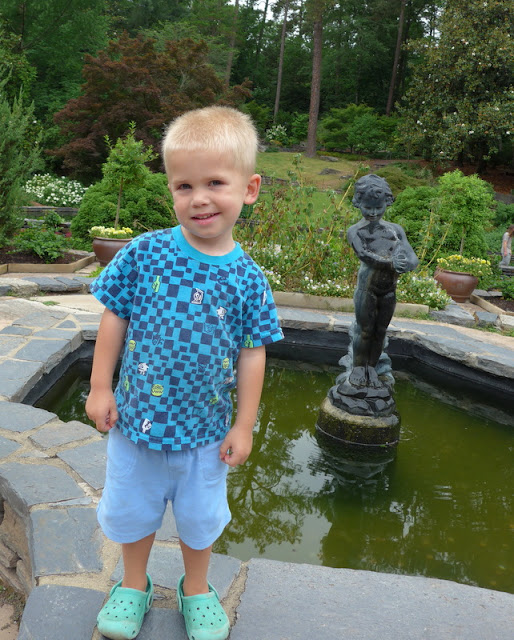 In fact here are several pictures that Rachel took. I think she carried the camera all the way to the car, taking several artistic shots along the way. 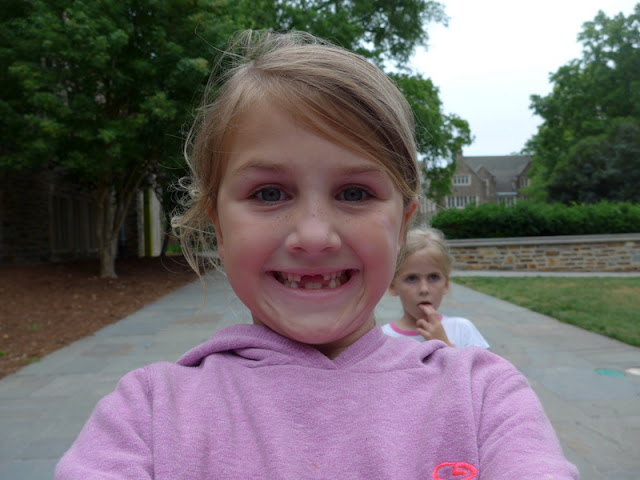 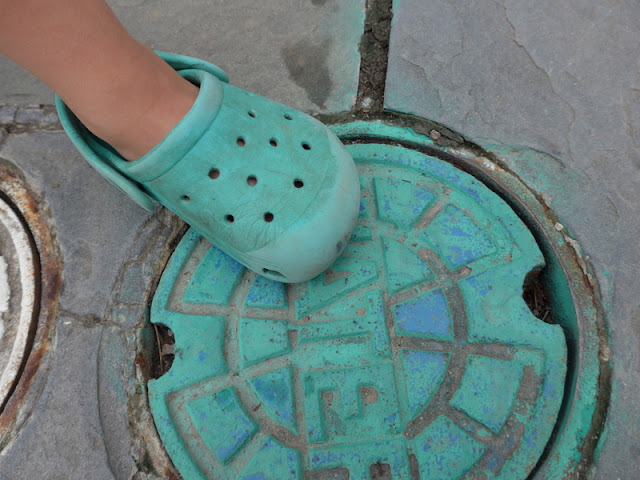 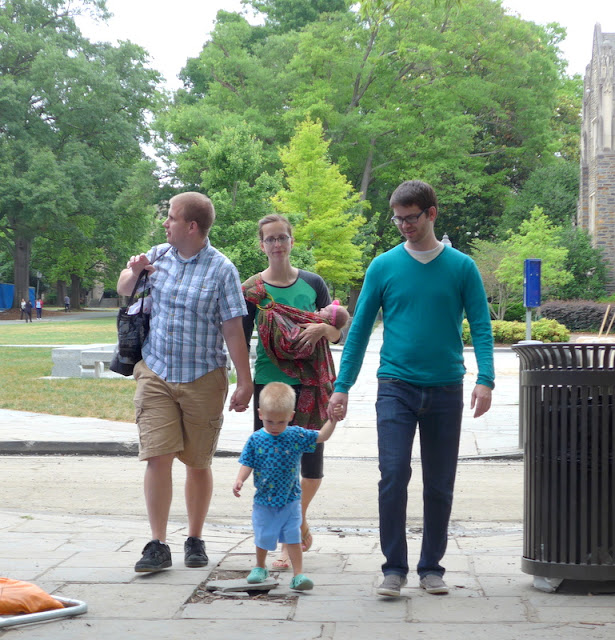 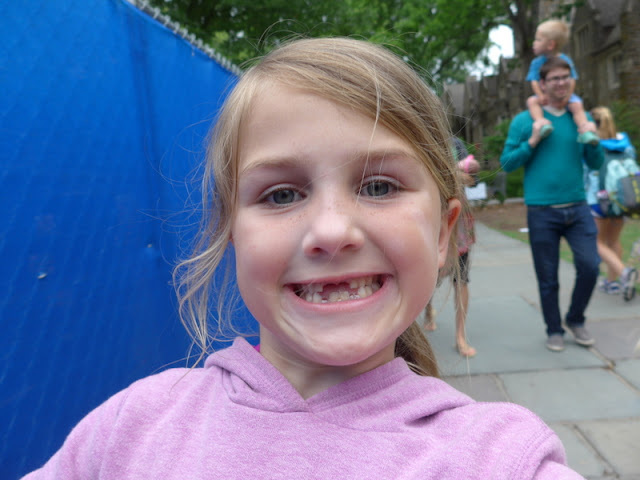 We stopped by the campus library on the way to the car so that we could use the washrooms and then headed to Barnes & Noble for the girls to pick up their summer reading book. Miriam got Princess in Black by Shannon Hale and Rachel got The Strange Case of Origami Yoda by Tom Angleberger. And then we headed to the county library to check out many, many more books—and it's a good thing, too, because Miriam finished reading Princess in Black on the drive between Barnes and Noble and the library!

Andrew started dinner as soon as we got home. I'm pretty sure I ate like twice as much as everyone else. And then the kids went out to play and I was like, "I don't think I'm ever going to move again. How do they have energy to play?"

Miriam even asked if we were going to take a family walk after dinner and I was like, "Are you kidding me?"
Posted by Nancy at 7:26 PM