Happy Birthday to me!

This morning Benjamin kept asking for his "yoda." What he meant was "minion" (he got one in a cereal box a few days ago) but we found Yoda, anyway, along with all the other Star Wars toys we have. and Rachel insisted we do a photo shoot with Zoë.

Our finished product isn't nearly as pretty as the inspiration, but that's how it goes when you're winging it, I guess. 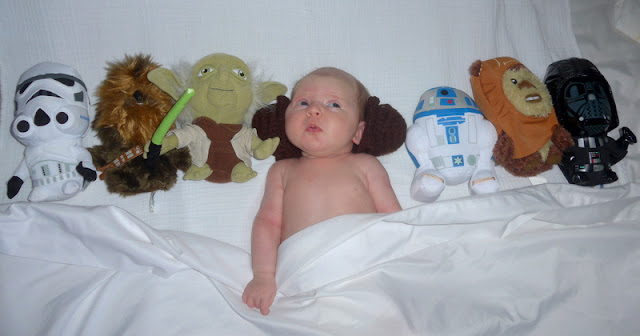 Perhaps we'll try again in the near future when Zoë's asleep (and a little less wiggly). Rachel wanted me to make Zoë a new wig but I made her use the headband I made for a halloween costume years ago. It was far too big for Zoë, of course, but we made it work.

The girls had a play date at the Hennessee's today, so they were gone for most of the day, but here are all the kids crowding around Zoë, who is starting to show interest in her siblings. 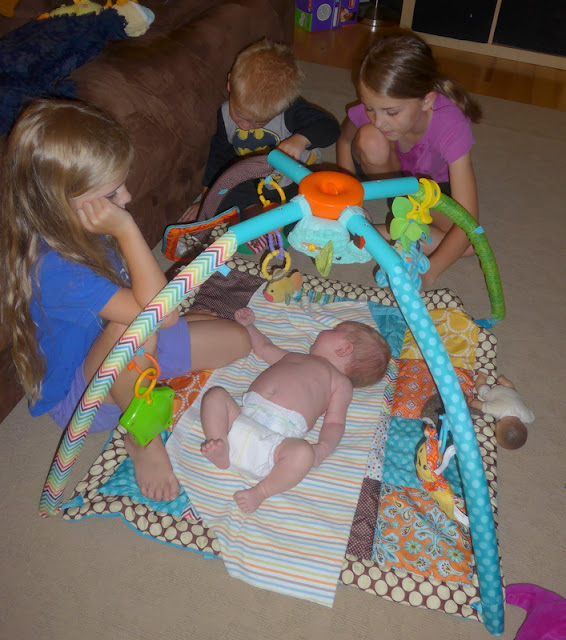 She currently hates her soother and despises tummy time, so that's fun. But at least she's still cute! 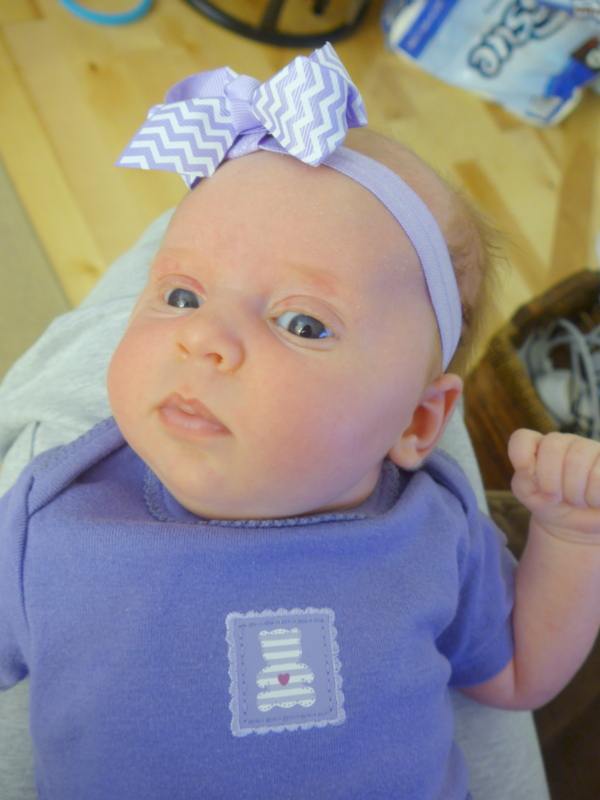 And after a few really bad nights in a row she had a great night last night (her little birthday present to me). She woke up every couple hours or so, but nursed right back to sleep every time, which was great. I can do that and still function the next day. It's when she stays awake for hours in the middle of the night that I can't handle life.

Grandma and Benjamin made my cake this year—a funfetti cake (much better than the cheesecake fail of '14)—and, yes, you're reading that number on the cake correctly. Thirty years! 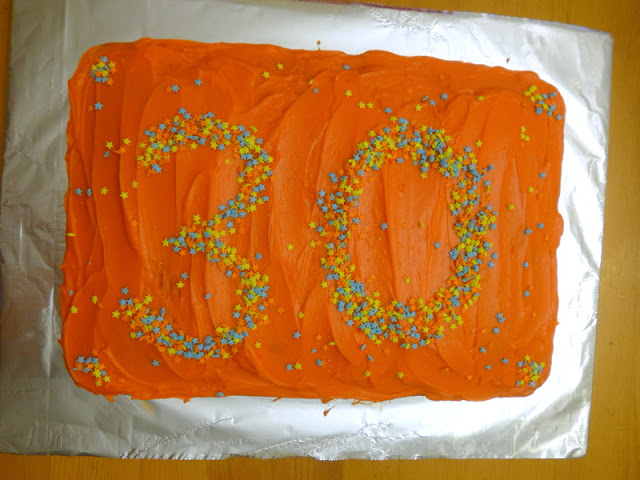 This is Zoë looking up at me and thinking, "So that's what I'll look like in thirty years..." 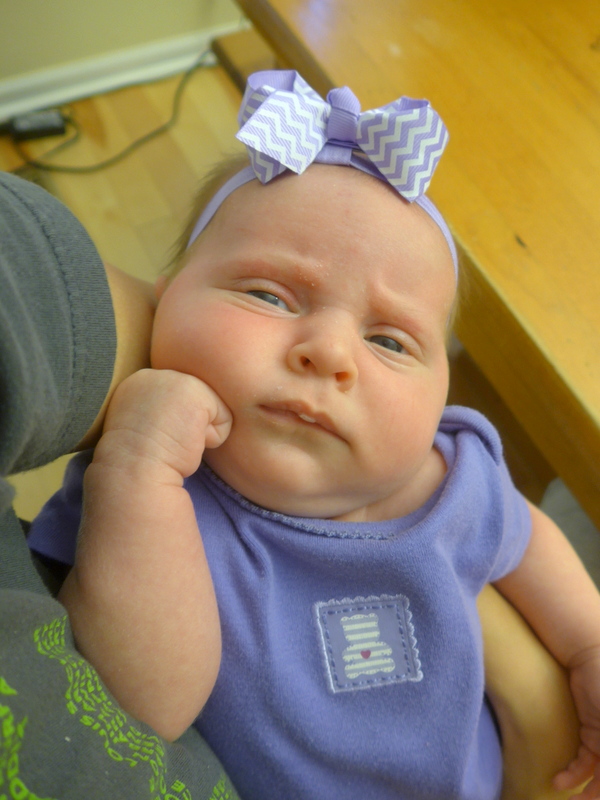 I'm not sure she's impressed...but she doesn't seem too impressed with anything in life so far.

I got to use the same three candles Benjamin used for his birthday, only this time each candle represented one decade instead of one year. 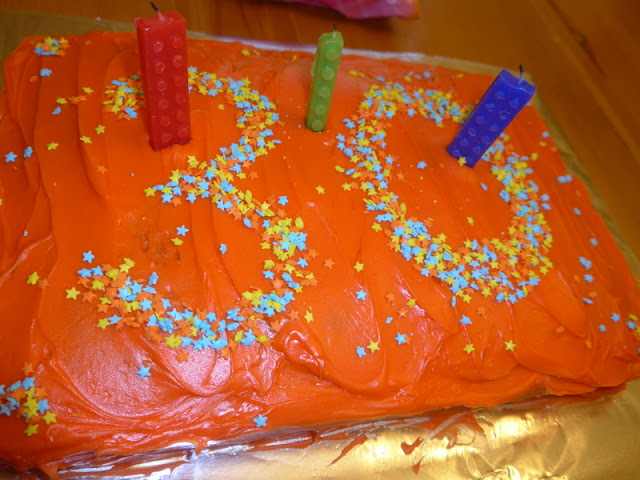 Here are a few pictures Rachel took while they were singing to me (the balloons, by the way, were from Zoë's baby shower on Saturday but we kept them around for my birthday—so festive). 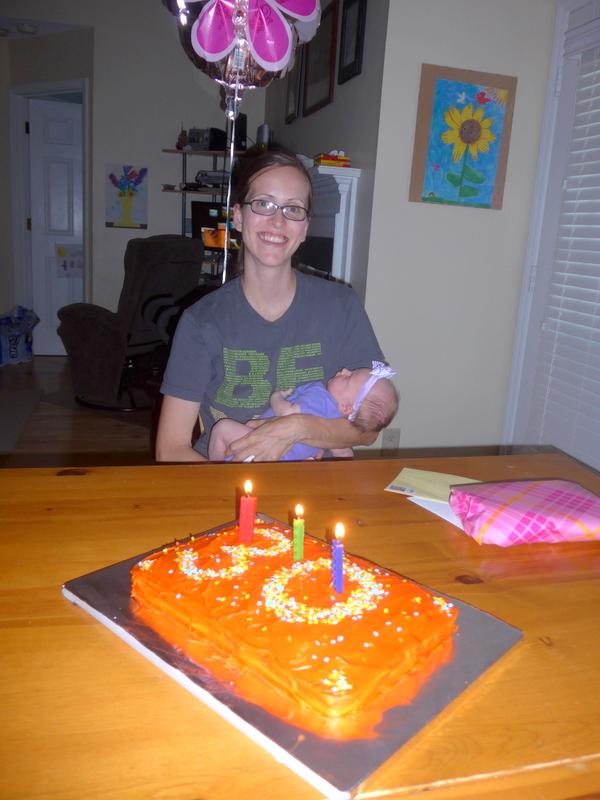 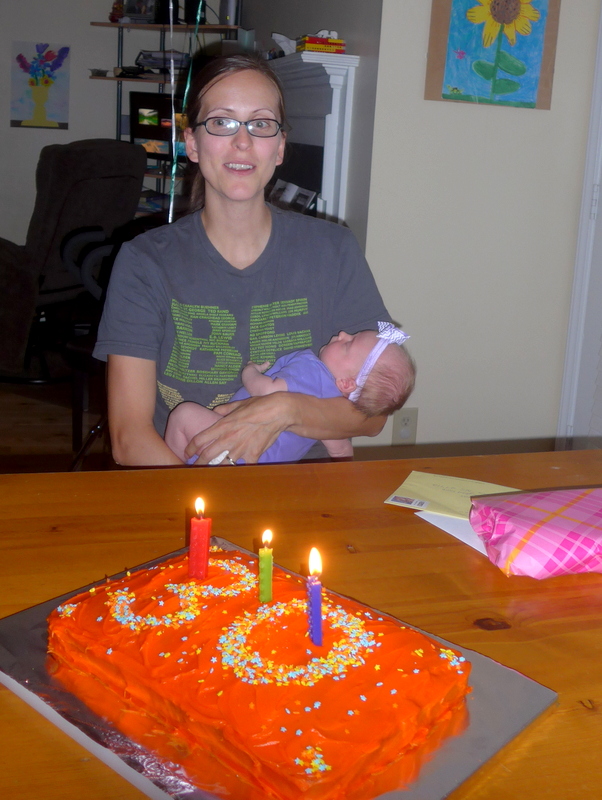 By way of presents I got: a package of Nutter Butters from the girls (wrapped in layers; so tricky) and cards from my parents (thanks, Mom and Dad) and Andrew's parents; my visiting teacher Kaitlan stopped by with a gerber daisy plant; and the kids each made me a card as well.

Here's the one from Rachel: 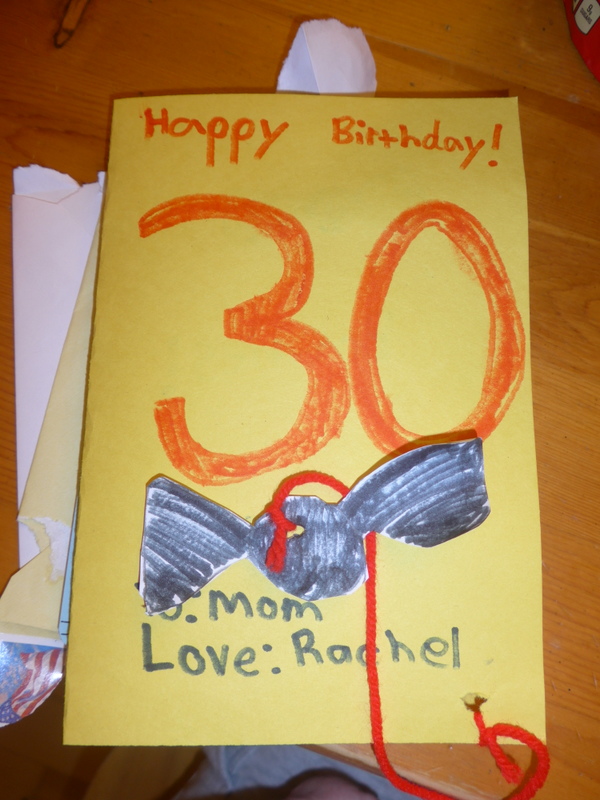 Dear Future Rachel: You refused to make a normal face for me and insisted you'd be happy with this one for the rest of your life. And that's why I included this goofy picture. You gave me no choice. 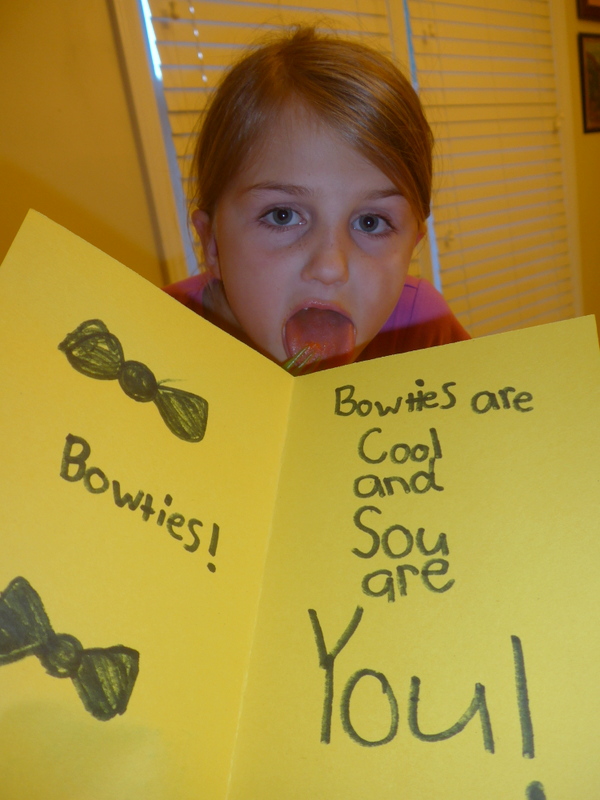 Rachel's a big fan of Doctor Who right now, thus the "bowties are cool" line.

Here's the one Miriam made: 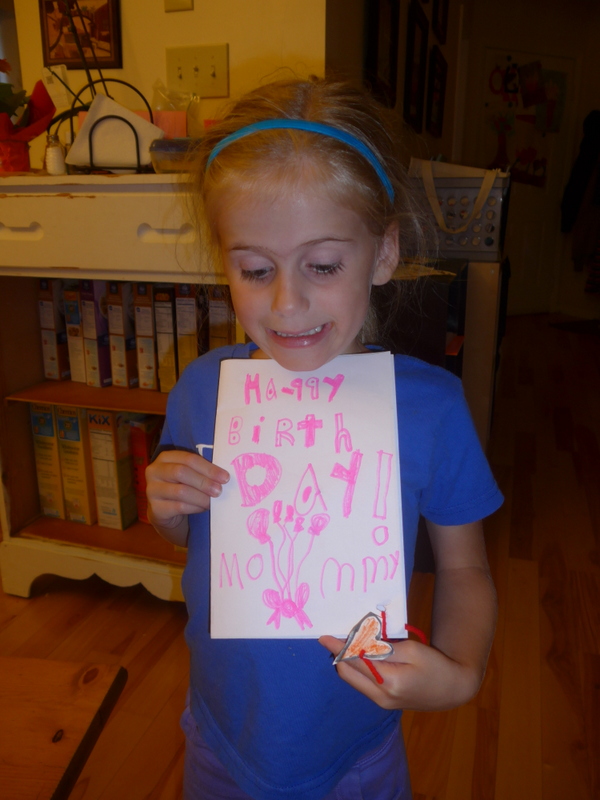 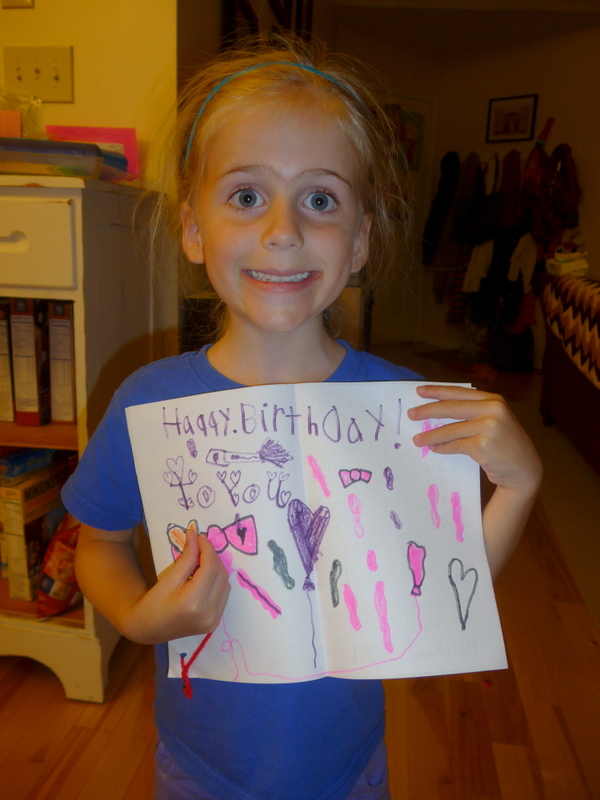 Both the girls added a dangly cut-out to their card. Rachel's is a bowtie (because bowties are cool) and Miriam's is a heart.

And here's Benjamin with his card: 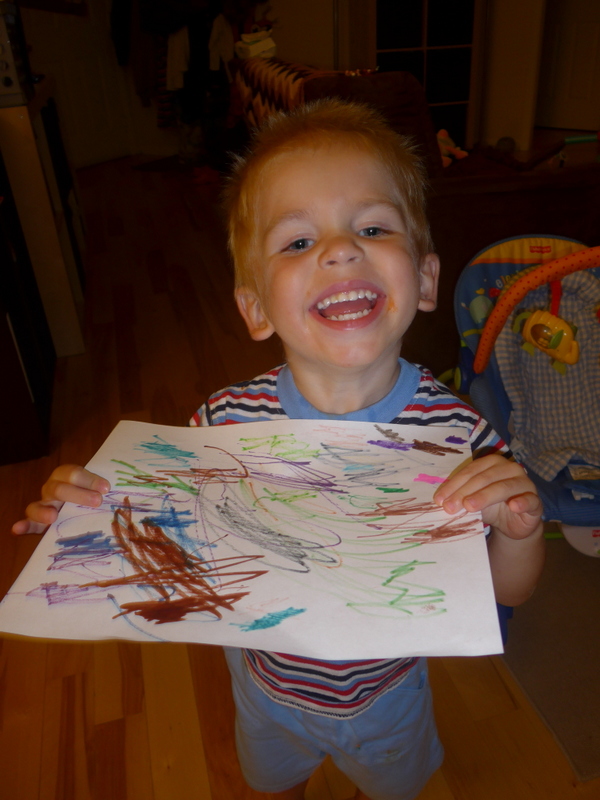 It's only single-sided but he used every marker we own, so it's pretty special. It was a labour of love.

After dinner and cake and presents we settled down to watch Paddington together. It was pretty cute. We'll have to find the books; I don't believe I've ever read them (at least, not the novels (I'm sure we've read a few of the picture books)).
Posted by Nancy at 10:50 PM