On Saturday morning the three oldest kids woke up around 7:00 and then, after quietly having breakfast together, played school in Rachel's room for three hours. Andrew and I were quite shocked when we woke up and looked at the clock. To reward the children for their kindness (a sleep-in like that is a rare gift, indeed), we decided to head to Pelican's for a snow cone.

We hadn't been to Pelican's yet this summer, though I think we went when Andrew's parents were out visiting (in March). Or maybe Grandma only took the kids and I stayed home to sleep with Zoë (that sounds highly plausible). At any rate, with some of us not having been in about a year and a few of us not having been at least for a couple of months, we hadn't been to Pelican's in a long while so we decided to go.

On a whim, I put Zoë's hair up in her first little pig tails: 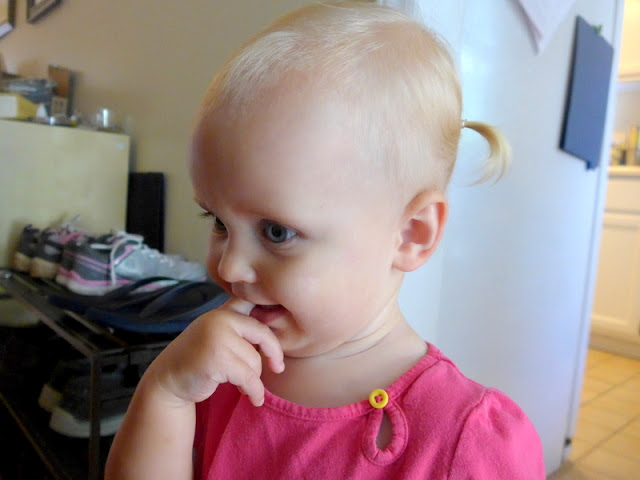 They were at once ridiculously adorable and adorably ridiculous. She still has no hair to speak of on the top of her head, though her little mullet in the back nearly reaches her shoulders, so the pig tails only involved the hair in the back. The hair on the top was left alone. 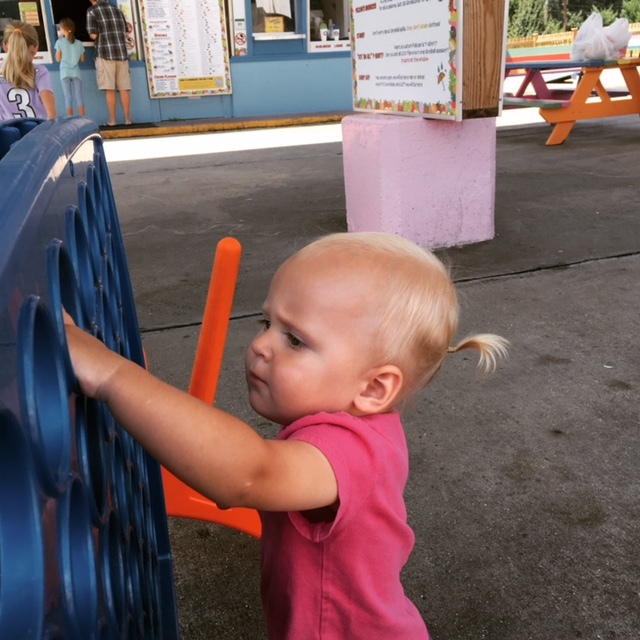 The kids all chose blue flavours so that their tongues would end up blue. Sour tsunami is one of their favourite flavours for this reason. 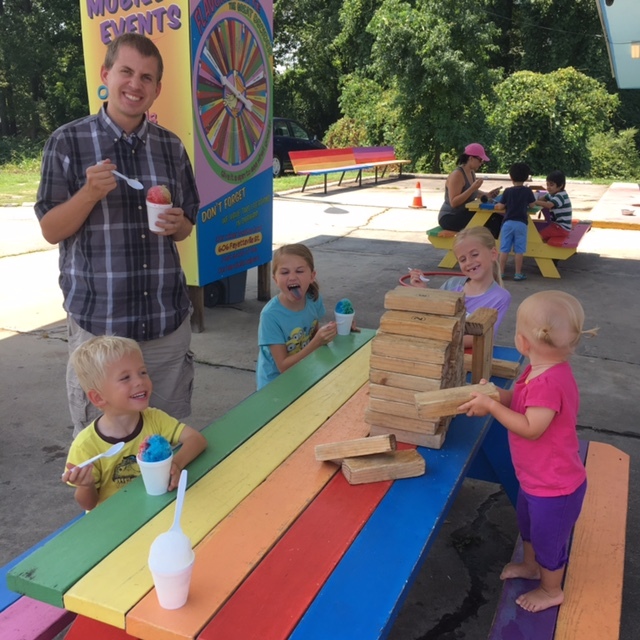 Pelican's is a favourite local hangout for humans and anthophila, alike, which wouldn't be too much of a problem except that people and bees are rather skittish around each other. Bees are always around: drunkenly sipping from puddles of melted snow cone or obnoxiously buzzing around the rim of our cups, darting between our mouths and our spoons.

In the past, we've always been the more anxious than the bees. Our kids have been seen running and screaming to get away from the bees. We've always told them that the bees are after the sugar, not the children. This Saturday was no different. We'd actually just moved tables to get away from a few particularly brazen bees when a bee decided to land in Benjamin's fluffy blond hair. Benjamin felt the presence of this tickly little fellow and reached up to scratch at it (not realizing that the itch was a bee), scaring the bee 100% to death.

"WHAAAAAAT!?" he screamed and then (for whatever reason) slammed his forehead on the table.

I checked to make sure the stinger was out and then we loaded up the kids to finish their snow cones on the go because all of a sudden they were all too scared to sit and eat at Pelican's. 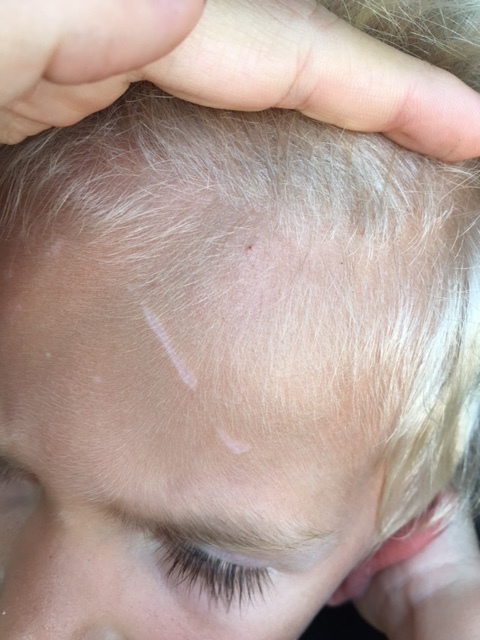 Benjamin was not impressed with that bee, but overall he took it like a champ. 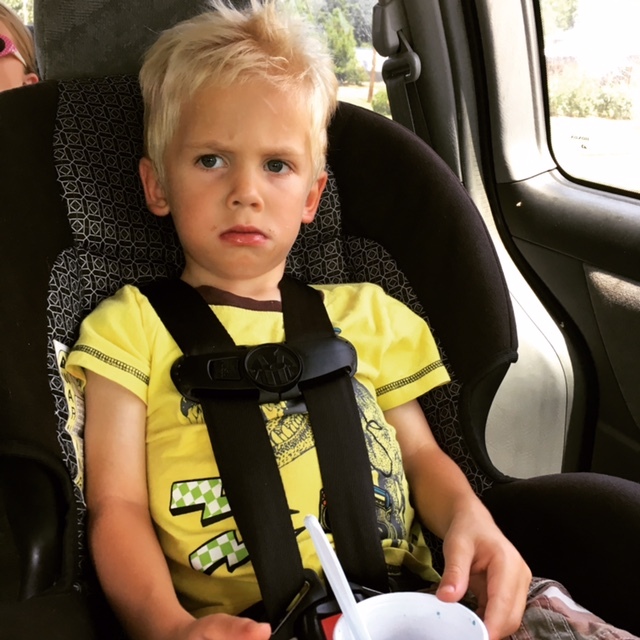 We stopped at a pharmacy for some After Bite, which, as it turns out is basically just baking soda (and is also highly effective at relieving bee stings; we put it on him once and that was all it took to make a noticeable improvement).

Here are the kids with their blue tongues: 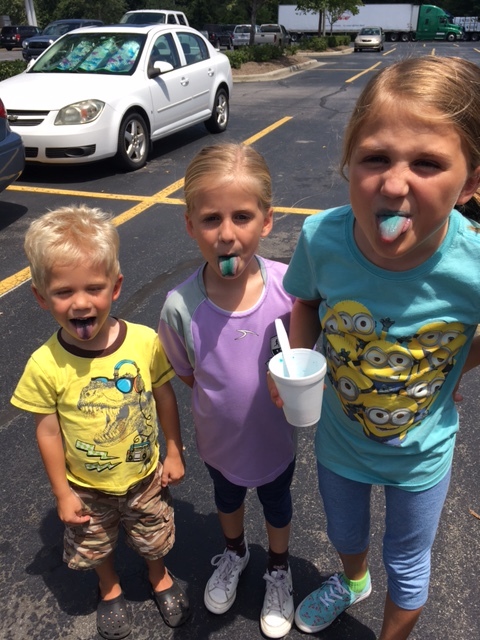 And here's Zoë trying the sour tsunami (she wasn't a huge fan): 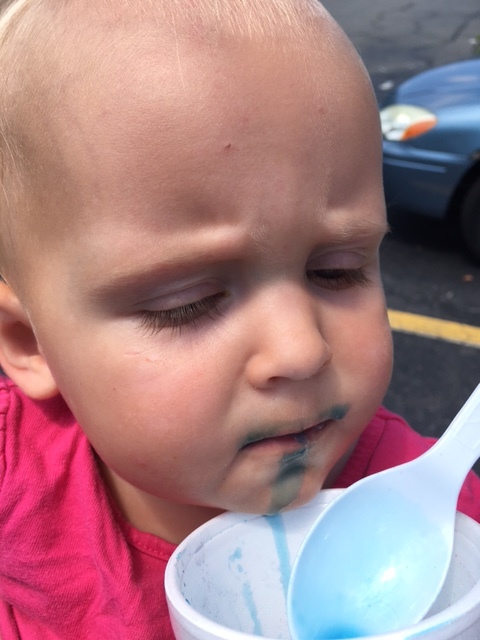