Fixing this, fixing that...

We've been busy around here, which has led to some silence on the blog front. One big change was a new calling for me. Andrew hinted a change was in the works for me a few weeks ago, which I was glad to hear because as much as I enjoyed my compassionate service calling, asking people to do things was starting to feel burdensome.

So not this past Sunday but the Sunday before, Andrew (apparently) texted me at 9:45 AM, asking me to be at church fifteen minutes early. First off, that's an interesting time to text me to ask me to be fifteen minutes early because by that time in the morning I am fully in the throes of getting everyone ready to go. There's breakfast to be eaten, zippers to be zipped, fights about hair to be had!

Second, I didn't even get the text, so it was a bit of a surprise when I arrived to church seven whole minutes early (slow clap!) only to have Brother Wood grab my elbow and escort me right out of the chapel declaring, "There you are!"

I'm in the nursery now! And it's perfect timing because Zoë's to that age where sitting through three hours of grown-up meetings is torture, but where she's still technically too young for nursery. But if Momma's working the nursery where's a baby to go but to nursery with Momma? Huzzah!

This was our second week in there. Zoë seems to love it, though I think it will take her awhile to fully adjust to the culture of nursery (sharing toys and not climbing on the table...what?). I've been enjoying it as well, though probably not quite as much as Zoë.

I was supposed to go to a baby shower last Saturday, but when I woke up in the morning the van was all torn apart. The sliding door broke when we were coming home from the beach; we could only get it to open a few inches and had to do some weird maneuvering to get it to close at all. When we got home we ordered the parts we figured we needed and then they came in the mail and sat in the entry way and, finally, a Saturday rolled around when Andrew had time to work on the car. So when Benjamin came in to wake him up bright and early, that's what Andrew decided to do.

I hurried up to help him as soon as I was up. We watched YouTube videos and figured out how to take the door of the van off...only to have all the bearings crumble and fall off the roller. Evidently those were due to be replaced as well, but unfortunately we didn't have any on hand. So, we reassembled the door and went inside to order more car parts. We figured we'd replace the rollers on both doors, just to be on the safe side.

Those came in the mail this week so we spent about ten (yes, ten) hours fixing our van doors on Saturday. We would never make it as mechanics, but we finally figured things out and even used a soldering iron (first time for both of us)! 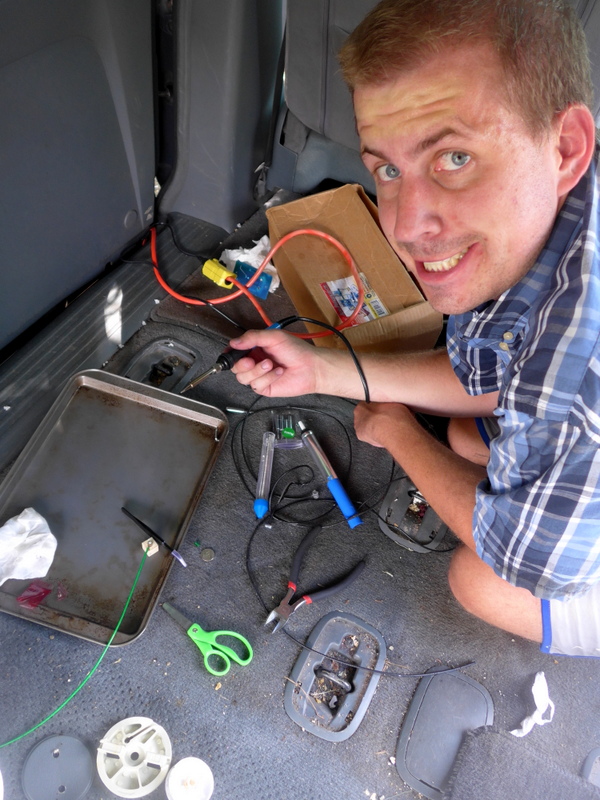 We're happy to have a working door again—and an automatic door, to boot! 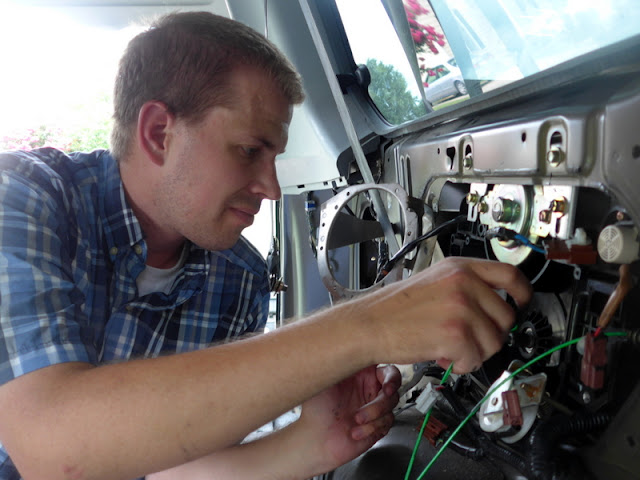 While our door was inoperable we took the opportunity to tell the kids about what vans were like when we were little kids. First of all, there wasn't even a sliding door on the driver's side, so everyone always had to pile in through the sliding door on the passenger side. Second, the doors were all manual; there was none of this push-a-button magic to have the doors open and shut for you. Third, we once had this junky yellow van—a bright orange, classic VW van—and the sliding door of that gem would fall off the track at random so I was always terrified to close it. You never knew when it was going to fall completely off, and then somebody (never me; I was too little) would have to lift it back where it belonged. (And don't even get Andrew started on The Big Blue Van).

The children reacted to our tales with horror and I found it rather hilarious when they complained out our plight while traveling to and from the pioneer activity. It was like having one broken door on our super-speedy, air-conditioned, cushy-seated prairie schooner helped the kids to really understand the plight of the pioneers. Sheesh, kids. Do you know what the pioneers would have given for a van like this (and roads like ours), even if one of the doors was jammed?

Apparently, however, there was some sort of handyman vibe in the air around here because our dishwasher hasn't been draining well and so this morning I pulled up a few YouTube videos and took it apart so I could try to unclog it. I don't know if I succeeded, but I did find a baby spoon, a plastic fork tine, and a bunch of other random gunk floating around inside the filter. 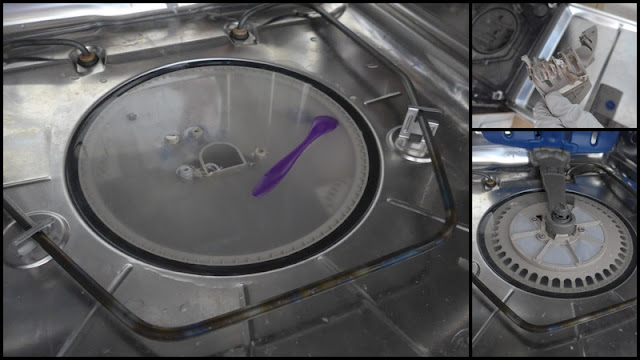 We're running it now and I'm crossing my fingers that it will drain fully. Time shall tell.

Oh, did I mention that while I was vacuuming on Saturday our trusty vacuum bit the dust. That poor thing has been through a lot. We've replaced the roller, a few belts, and one of the clips for the hose broke off when the vacuum fell over once (that was unfixable). Recently, the vacuum fell on top of me when I stopped vacuuming to pick up an unvacuumable bit off the floor and Zoë seized the opportunity to attack her nemesis. She hates the vacuum, so when she realized I had turned it off she figured she'd kick it while it was down and charged right for it with that little battle cry of hers (she's a shrieker, folks).

She knocked it over and it hit me, knocking me off balance and I went crashing to the floor with this dumb vacuum lording over me. It was all very dramatic, further fuelling Zoë's fear of the vacuum, I'm sure. I came out of the fight with a scrape on my arm reaching just about from my elbow to my armpit, thanks to that broken hose clip.

Zoë was probably like, "I told you that vacuum had it out for us."

Anyway, I was vacuuming on Saturday and all of a sudden I lost suction and, upon a thorough inspection, discovered the hose had been compromised. We debated whether we should simply order a new hose or...

"Let's just get a new one," Andrew said. "This one is almost ten years old. We've fixed it several times. It's had a good life."

We had Amazon points to use and he'd been meaning to get me something for my birthday, anyway, so now I have a vacuum. It came today and—I'm not going to lie—I have never enjoyed vacuuming so much in all my life. Ordinarily I don't like vacuuming. Like, Zoë, I'm not a fan of the noise, and vacuums are hulking, unwieldily beasts. But this vacuum is different.

I was literally going around the house finding things to vacuum, like...

And I was very successful, too! I very nearly filled the entire canister with debris.

I'm not sure whether I should boast about that or not. Like, what does that say, exactly, that I filled an entire vacuum canister all in one go? That my house is incredibly dirty? Or that it's now so much cleaner?

In case you're wondering, we went with the advice of The Sweethome ("They've never once led us astray," Andrew said) and got the Shark Navigator Lift-Away. It's cute and purple, quiet and swivelly and very, very sucky (which is a very good trait for a vacuum).
Posted by Nancy at 12:38 AM