On Saturday morning Miriam and Benjamin were happily immersed in the Pottermore website when it "disappeared." They're both relatively technically savvy, but The Internet is still a little mind-boggling. For example, we can no longer use the Chrome browser on the clunky computer in our living room; it refuses to update and yells at us all the time. Somehow, though, Chrome was mysteriously open every single time we'd turn the computer on. It turns out that a long time ago we'd bookmarked a page for Miriam on Chrome, so she thought the only way to get to that page was through Chrome. She didn't realize she could get to that page using any browser.

We got that all sorted out and now the page is bookmarked on Firefox, but The Internet is still a mysterious place.

So, the kids were on Pottermore—Miriam's super excited that she's finished reading everything there is to read about the Harry Potter world (all seven in the series plus The Cursed Child, Quidditch through the Ages, Fantastic Beasts and Where to Find Them and Tales of Beedle the Bard) so that there aren't any spoilers for her online—when they accidentally closed the browser.

Rachel must have helped them get to the website because (a) she understand the internet a bit better than they do, (b) Pottermore isn't bookmarked (yet) so someone had to have typed the URL or searched on google for it, and (c) it obviously wasn't Miriam or Benjamin who'd done that because they were both so unaware of how to get Pottermore back.

"We can't get it to come back! But I accidentally ejected this," Miriam said, holding up a DVD of Les Miserables. Evidently they'd been clicking around, trying everything.

"I will make it come back!" Benjamin said, running back to the keyboard. "B-O! I typed B-O!"

"It spells, 'Harry Pottermore! You get back here and stop being disappeared!'"

After watching those two try everything they could possibly think of to re-appear Pottermore, we did eventually intervene and show them what to do.

This morning, Benjamin wanted to get online again. Not for Pottermore this time, but for the website we once had bookmarked for Miriam (in Chrome): DUPLO building examples.

"Mom, will you help me get to Oggi-more?" he asked, reverting to his baby-word for LEGO in his excitement.

He's been having a grand old time on "LEGOmore" today.

We built this castle together: 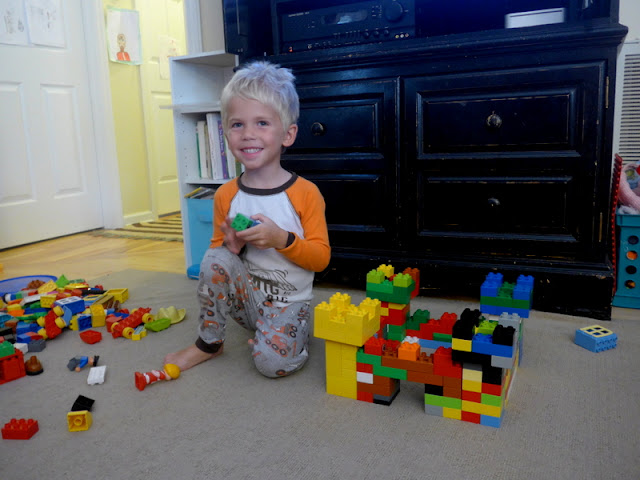 And here is a "stake center" that he built, a creation all his own: 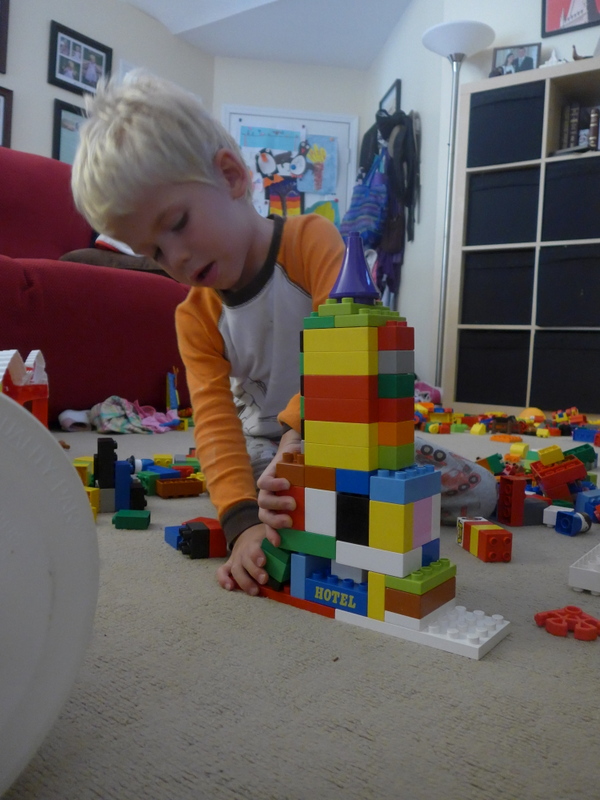 And here he is holding a giraffe he built after I decided to cut his shaggy hair: 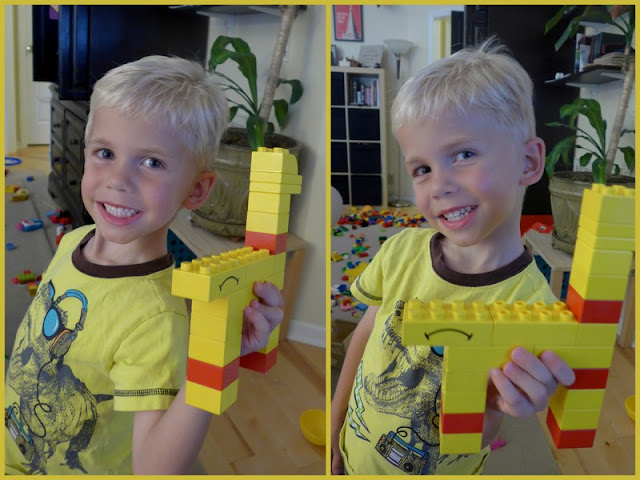 From birth, this boy has had the most fantastic head of hair.

It's cute when it's buzzed.

It's cute when it's long.

It's cute when it's combed.

It's cute when it's out of control.

We've been sitting on the out-of-control side of things lately. Still cute, but out of control. Last night I buzzed Andrew's hair, which had me thinking it was probably time to give Benjamin a haircut, too. But I'm so in love with his fluffy, fluffy goodness that I couldn't bear the thought of buzzing it all off! He doesn't like having his head buzzed anyway and requested that I leave it "a little bit long," so we decided to try a scissors-only haircut (with the help of a little website I like to call "Barbermore").

It turned out alright, I guess, though I still see some areas that could use some touching up. And while I still kind of miss his crazy little mop, I have to admit he's looking pretty dapper with his new hairdo. Miriam came home from school and exclaimed, "Whoa, Mom! Benji's hair calmed down!"

I suppose it was pretty miraculous to walk in on him looking like he hadn't just stuck a fork in an electrical socket. His hair was a little hyper before.

Thank goodness for the internet!
Posted by Nancy at 3:26 PM