Today we celebrated Andrew's birthday. It poured long and hard today so despite the gas shortage (a gas main broke in Alabama so we're running low here in the south) he took the van to campus and then got soaked walking to his office from the parking lot. While he worked on campus—in the quiet solitude of his office—I tried working from home, finishing up the last two chapters of that book I've been editing (a project of one of Andrew's advisors). Having all four kids at home was a little distracting, but they did their best to play nicely together.

In the afternoon I helped them get ready to decorate Daddy's birthday cookie, which he made himself (something the children found shocking—but that's what birthdays are like when you're the parent) last night while I was scrambling to get Zoë's baby book finished before my coupon expired.

The children had grand plans for how they wanted to decorate the cake cookie, but I've found that most of my ideas are turn out much better in my mind than during the actual execution of the project so I suggested the children draft up their ideas on paper first. Their designs were so complicated that even that task was daunting.

"I can't even draw this on paper! How can I draw it on a cake?!" Rachel cried out in frustration.

"We need to simplify," I said.

Eventually we came up with a theme—Pokemon—and we sat down to draft our ideas about that.

The kids wanted to draw a Rattata and a Pickachu and a Zubat.

"How about a Pokeball?" I asked. My Pokeballs usually turn out pretty close to how I imagine them.

The kids weren't quite sold on the idea, but we talked about it some more, adding grass and words and bounce marks to our design. When we had something everyone felt happy (enough) about, I set up some icing bags for the kids and left them to it. They pressed cookie cutters into the cake and traced the outlines for the letters, which worked out well. 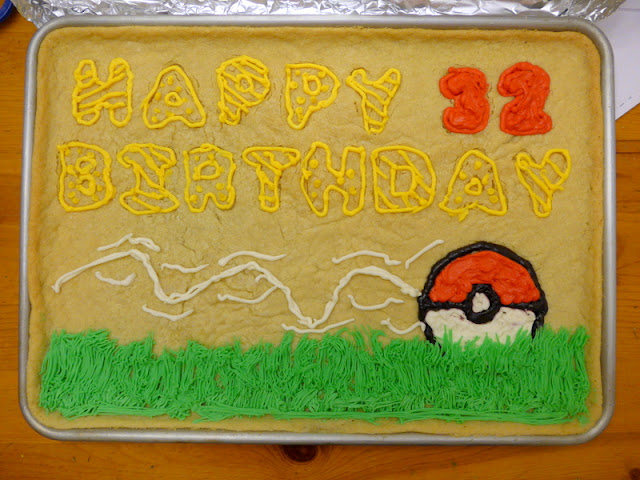 They could hardly wait to show Andrew the result, but managed to keep it mostly a surprise for him.

"It has something to do with a game on your phone and going for family walks!" Rachel blurted out when he got home.

"So, something about Pokemon," Andrew guessed.

"How'd you know?!" the kids wondered.

Here's Andrew lighting his own candles: 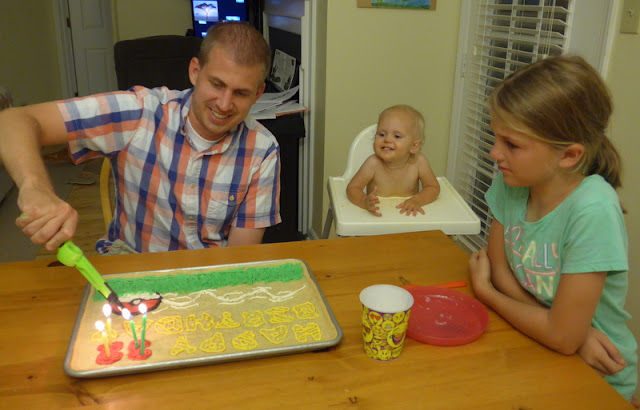 I lit the first one but couldn't get the second one to light so I had him take over. The kids were concerned about that as well. "You had to make your own cake and light your own candles?!"

Again, welcome to the wild, wild world of adulting. It's not as fun as it looks.

Don't get me wrong, being an adult has its perks, but that whole idea children have about adults getting to do "whatever they want whenever they want." That's definitely fallacy. Adulting is more about doing things you don't like to do cheerfully than it is about doing what you'd like to do.

A friend of mine posted a meme on facebook from a movie called The Fundamentals of Caring (which I've never seen) that went like this:

Person A: What's it like being a parent?
Person B: Every corny thing you've ever heard about having a kid is completely and utterly true. It's the only reason we're here.

So even though adulting is hard and it means you get to work all day long on your birthday (and then long into the night after the kids are in bed), if you're lucky you'll get to mean the world to someone else. And, boy, does our daddy ever mean the world to us!

Would you look at that grin? I mean Zoë's, not Rachel's (though hers isn't too bad either). 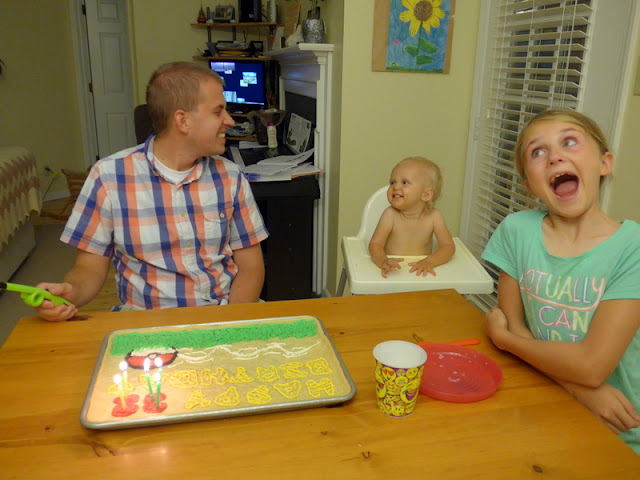 Here's a picture with all the kids gathered around Andrew, either singing to him or transfixed by the candle flames: 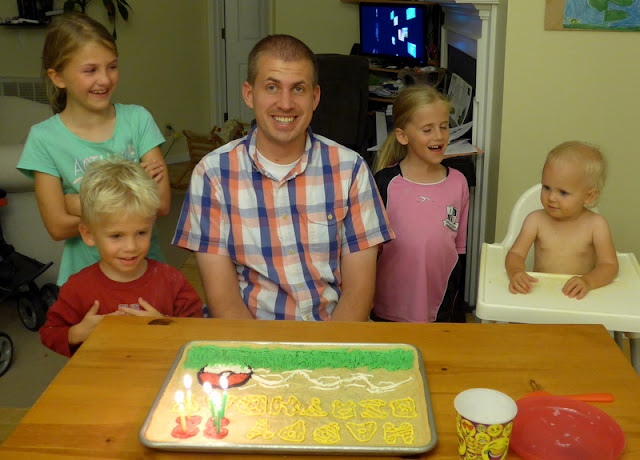 After we all had our fill of cookie, we cleared the table and settled in for a game of Rumis. Andrew taught it to the girls last night (while I was slaving away at Zoë's baby book) and they really enjoyed it. They're pretty good at it, too. In just a couple of turns we managed to (somewhat accidentally) block Andrew off from being able to build anymore, but he took it like a champ (another thing adults are expected to do) and watched us finish the game.

It was a pretty good way to ring in his birthday if I do say so myself. Happy Birthday, Andrew!
Posted by Nancy at 1:54 AM