This trip was rather saturated by history and somewhere along our journey Benjamin decided not only that he admired George Washington; he decided that he was George Washington.* In fact, when we visited Mount Vernon on Saturday he would only respond to us if we called him—and referred to himself in third-person strictly as—"General Washington."

"Hey! Wait up! General Washington want to climb that fence, too!" he'd call after his sisters.

One of the easiest ways to get him to listen to us, actually, was just to call out, "Attention!" or even, harking back to our marching band days (which is as close to military training as I ever got), smashing the command into the two-syllable bark, "Ten-hut!"

Immediately he'd stop whatever he was doing, snap to attention, and salute us: 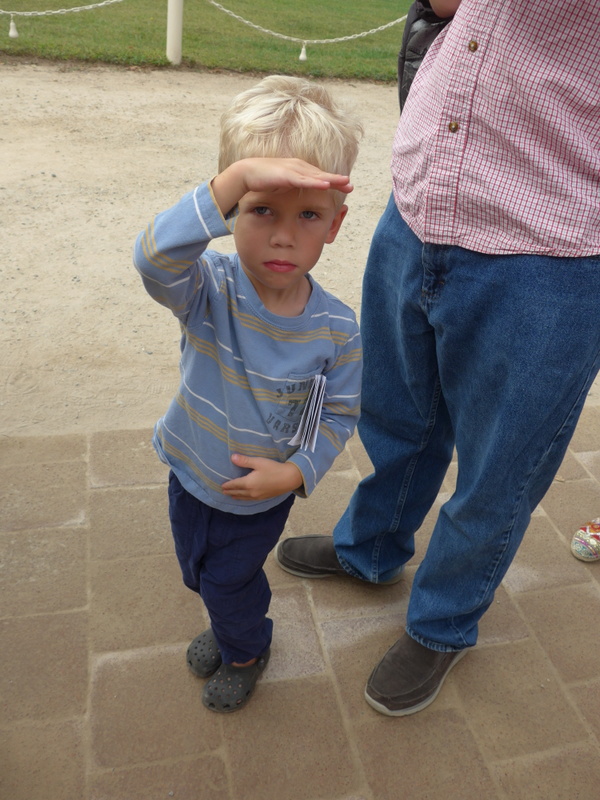 He might not look like he's having fun, but he is. It's just that George Washington was a pretty solemn and serious bloke who saluted everybody, always.

From the moment he decided he was General Washington we hardly had a magically stopped lagging behind, complaining of fatigue. Instead he'd gallop ahead of us, pretending he was riding a horse. If he got tired of this (which he did, but only after galloping for blocks and blocks on some days and literal miles on other days) he'd request a ride in his carriage (also known as the stroller (we brought the double stroller along on most days so he could hop on for a rest when he needed to).

On Monday morning when Amanda (who was so kind and let us crash at her place all week) was giving us a little walking tour of Old Town Alexandria, Benjamin continued with his George Washington act, galloping up and down the sidewalks (and even along a few cobblestone streets (original to the Revolutionary War)).

When we came to Gadsby's Tavern, a place George Washington was known to have frequented, Benjamin just about jumped over the moon for joy. He ran up to the sign declaring, "George ate here," and hugged it tightly. 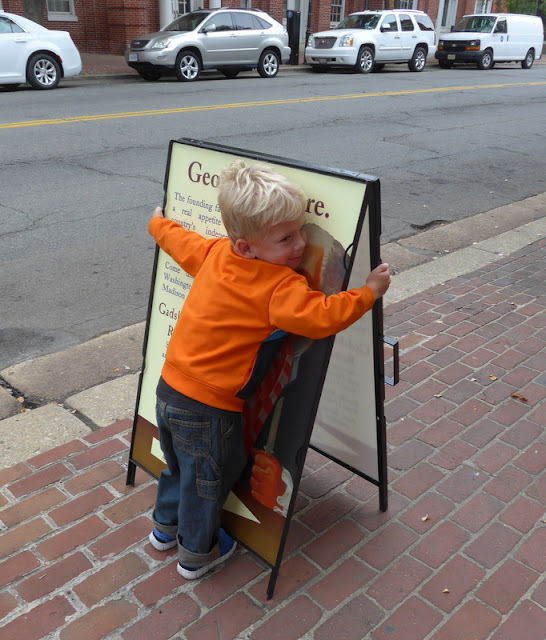 Could life get better than this? 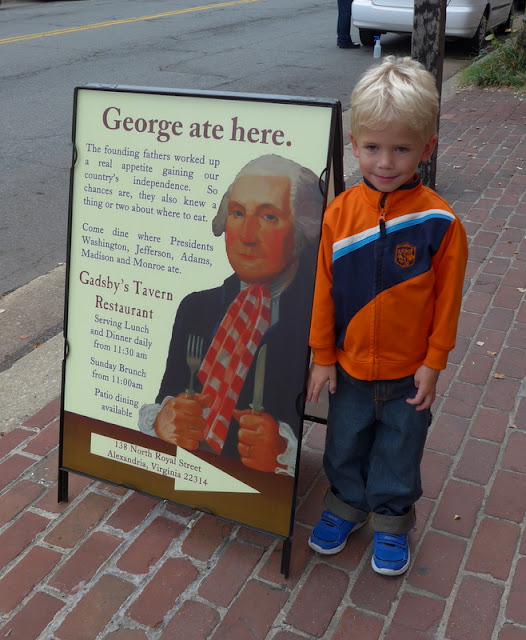 Oh, it can—especially if you stumble upon the replica of Washington's town house. Benjamin hugged that, too (at least as well as one can hug a house). 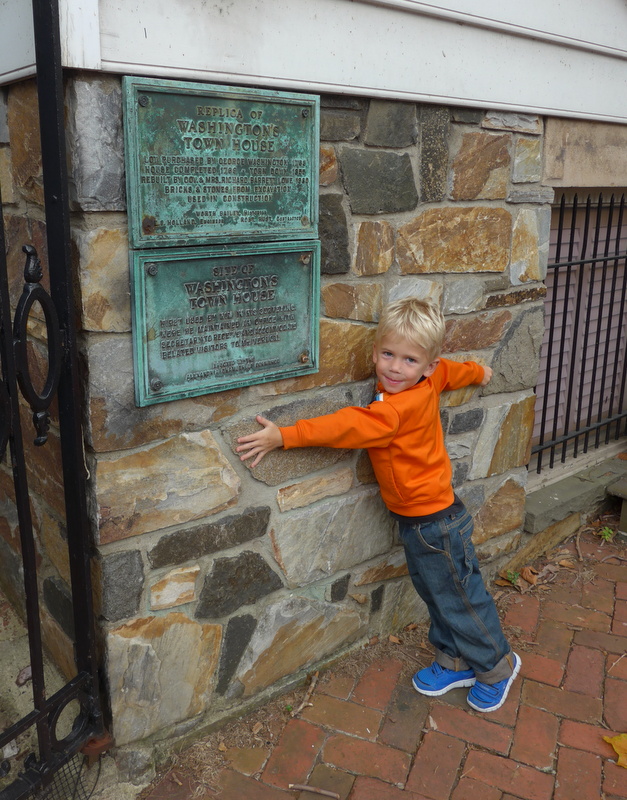 According to visitalexandriava.com, "George Washington purchased this lot in 1763, and his town house was completed in 1769. He maintained an office with a secretary here to receive and accommodate belated visitors to Mt. Vernon. The house, noted for its simplicity of design, was torn down in 1855. In 1960, Gov. and Mrs. Richard Barrett Lowe had the house rebuilt on the original foundation, using bricks and stones from the excavation."

I started working on a tricorn hat for his costume when we got home (using this pattern (only I sewed it instead of gluing)) and it was finished enough that he was able to try it on this morning. He was pretty happy about it and got all caught up in dreaming about all the other things he'd need to make his costume complete. 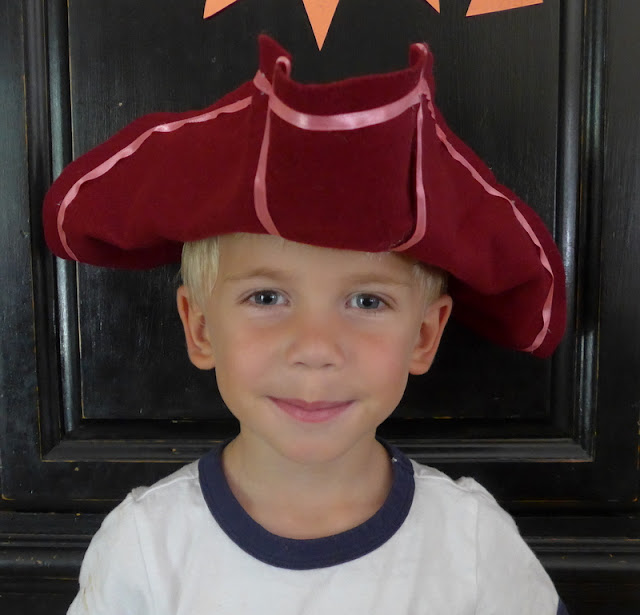 "Wow!" he said. "I look just like George Washington! Now all I need is a drum and a gun and a real boat. You can make that next, right?"

I only have to help Miriam make a lion's head for her costume. She wants to be Luna Lovegood, dressed up for the quidditch match between Slytherin and Griffindor. "It doesn't have to roar though," she assured me. Because that will make the task easier. We found pictures of someone who did an awesome job making their own Luna Lovegood lion hat and are going to attempt our own; may the odds be ever in our favour.

Speaking of The Hunger Games, Rachel is planning on being Katniss Everdeen and has been obsessing about making a functional bow and arrow set. I looked up tutorials for this as well, but it's going to take a more skilled crafts(wo)man than I. We'll be able to make a non-functional one, for sure. She's not too happy about this but...whatever. If only my grandpa were still alive so he could show off his archery skills for her! They would have both loved that! 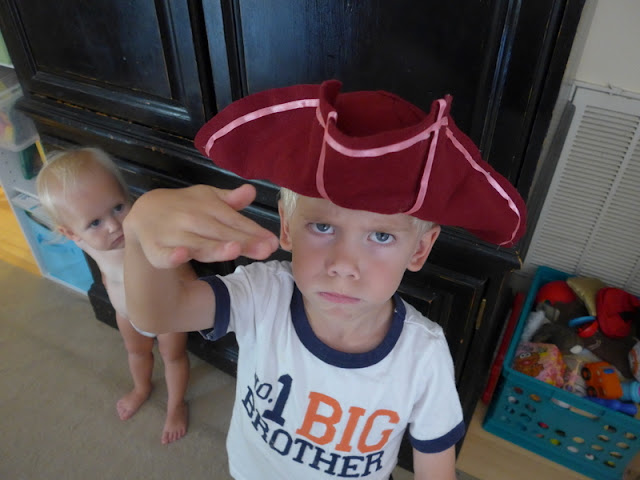 For this issue of the Hancock Hummer I plan to write up the history of my third-great-grandfather, George Washington Hancock, partly because I have to write up the history of someone but mostly so that I can tell Benjamin all about him. I think he'll think it's pretty cool that once of his ancestors' names was directly plagiarized from the general!

* When I was about sixteen I babysat my mom's cousin's daughter's children one day. I had to work that day as well, though, so instead of going straight to their house to babysit, the girls were dropped off at my parents' house while my mom was picking me up from were. I found them watching a Disney movie with my dad when I got home.

"What are their names?" I asked.

"What's your name?" I asked the oldest, who was about four years old at the time.

"And what's your sister's name?"

"She must have loved that," her mom remarked when we told her what had happened.

**I can't actually remember what her name was either, but I will always remember Snow White.
Posted by Nancy at 12:03 AM